“Creativity is a beautiful thing” is what first-grade teachers tell parents before saying, “But Kenneth needs to stop smearing carrot on his classmates.” And it’s also the kind of thing that you can probably start telling Star Wars fans, who, in the great spirit of fandom, have put together some delightfully strange tributes to the multi-billion-dollar franchise, because licensed Star Wars merchandise just wasn’t insane enough. Sure, you might glance around and find a few cool Star Wars lunch boxes on Etsy, or maybe a fun poster print, but they haven’t embraced the true insanity of the site’s appeal, the true power of the crafty side. Here are 30 of the most insane Star Wars examples of fan … well, creativity. 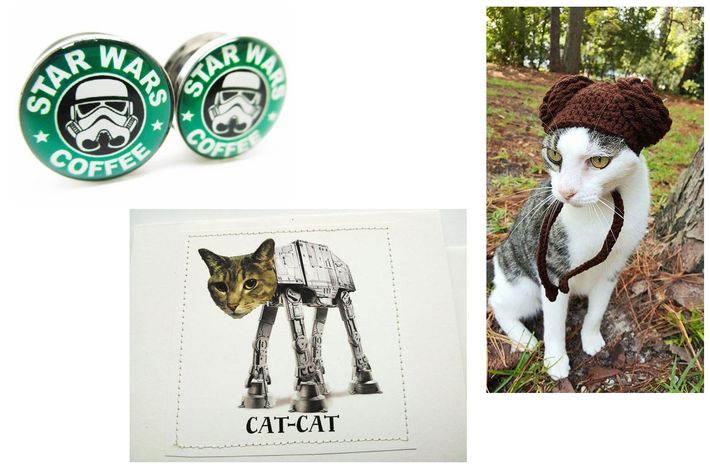 1. Best Interpretation of “Edgy”
Star Wars Coffee Ear Plugs, $10.49
This is what all the coolest baristas are wearing to midnight showings on December 18. You too can be a regular Princess Latte.

2. Most All-Purpose
Star Wars CAT-CAT cat card, $6
Condolences, birthdays, congratulations to the Imperial Army for successful taking the rebel base at Hoth — what occasion doesn’t warrant the use of a CAT-CAT greeting card?

3. If That Wasn’t Enough Cat for You
Space Princess Cat Hat, $22
In a few weeks, there will probably be space general cat hats for sale, too. 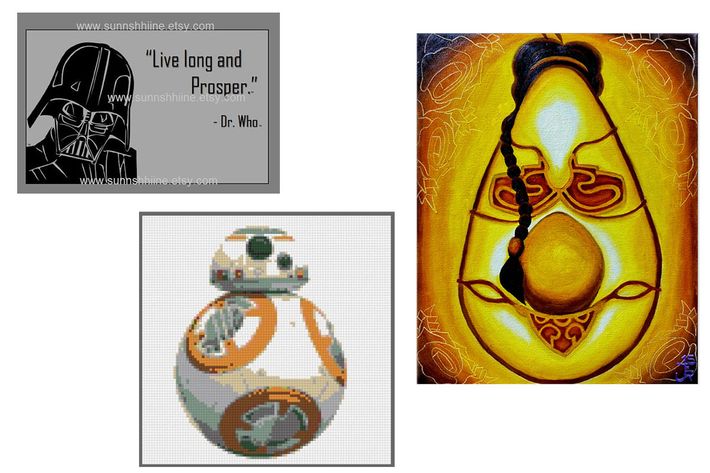 4. Most Infuriating
Live Long and Prosper Sci-Fi Mash-Up, $2.50
To quote Captain Malcolm Reynolds, “So say we all.”

6. Most Yoked
There Is Another, $10
This is the subject of my gender-studies thesis, “Leia, Madonna, and Whore.” 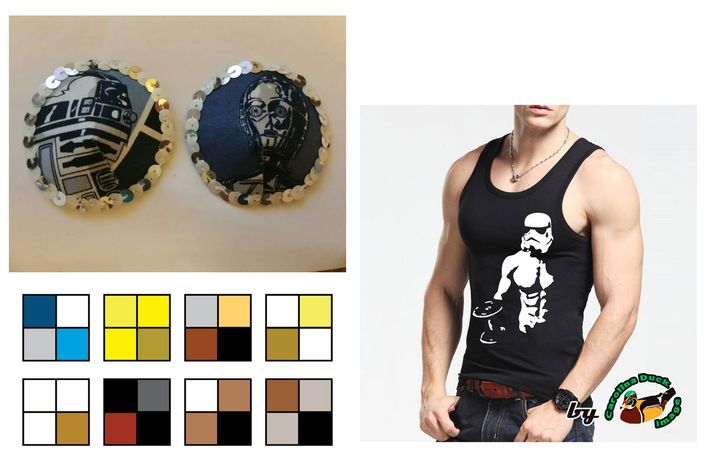 7. For When You Want to Role-Play, But Only in a Very General Sense
Star Wars R2-D2 and C-3PO Nipple Pasties, $20
Perfect if you were planning on starting a career as a Star Wars–themed burlesque dancer named Oola-la.

9. Also Yoked
Stormtrooper Star Wars Inspired Workout Tank Top, $13.99
This is the subject of my other gender-studies thesis, “Plastoid Armor and Male Fragility.” 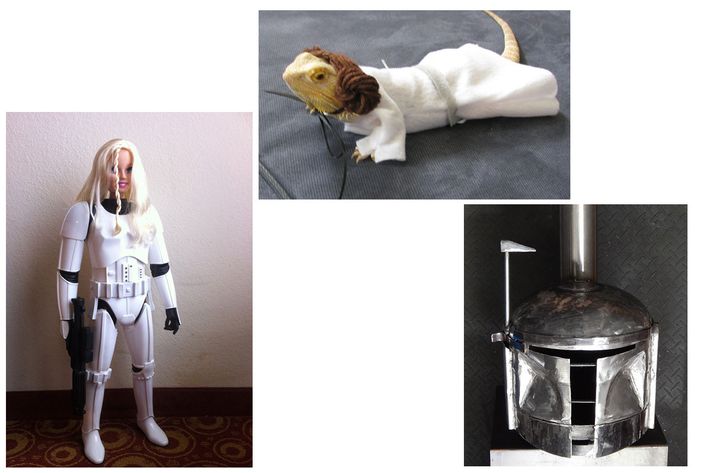 10. Second-Most Needlessly Expensive
Custom Barbie Stormtrooper, $450
Have you seen Toy Story? Given a Stormtrooper action figure and any Barbie doll, the average child will take about five minutes to make this. Two if the toys in question belong to someone else.

11. Oddly Specific and Already Famous
Handmade Felt Bearded Dragon Princess Leia Costume With Hair and Lightsaber, $13
Some Etsy items are so purely, wonderfully specific that they become events in their own right. This made it into a Midnight segment on absurd Etsy products, so we cannot take credit for the discovery. But we do, however, want to celebrate it nonetheless.

12. For the Space Lumbersexual
Boba Fett Star Wars Wood Burning Stove, $517.79
The seller would like you to know that “I have not coated the steel. Over time it will become rusty adding to its rugged beauty.” 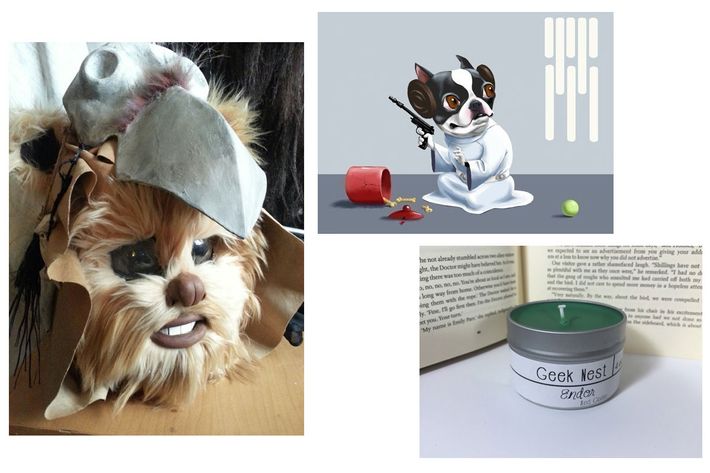 13. Most Vicious
Logray Ewok Mask, $259
Hang enough of these decapitated Ewok heads around your household as a warning to others who might cross you, and we guarantee those little demons will never attack your precious Death Star’s shield generator again.

14. Best Dog Art
The Ultimate Boston Terrier Star Wars Dog Art Print Set, $60
There is a lot of competition in this category, but just try not to start cooing over Dog Leia.

15. For the Candle Blogger in Your Life
Star Wars Endor Soy Candle, $8
Also useful for luring Ewoks into a set of carefully laid traps if you’re into that approach to Ewok-hunting. 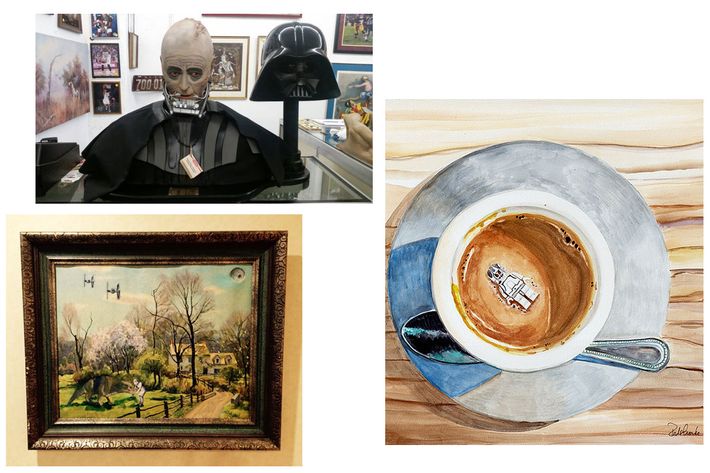 17. Most Pastoral
Dewback Springtime, $200
Just as Roman soldiers were promised a plot of land after service to the Empire and American soldiers got the perks of the GI Bill, Stormtroopers get a cottage on one of those suburb planets and, if they’ve done distinguished service, a bonus Dewback.

18. Most Likely to Be the Cover of My Collection of Personal Essays
Happy Death by Coffee, $500
Working titles include: Real Life: It’s a Trap!, The Time I Told My Parents I Wanted a Millennium Falcon Lego Set Instead of an 8th Birthday Party and Why That Was the Right Decision, and Is He Hot, or Did He Just Laugh at My Ewok Joke? 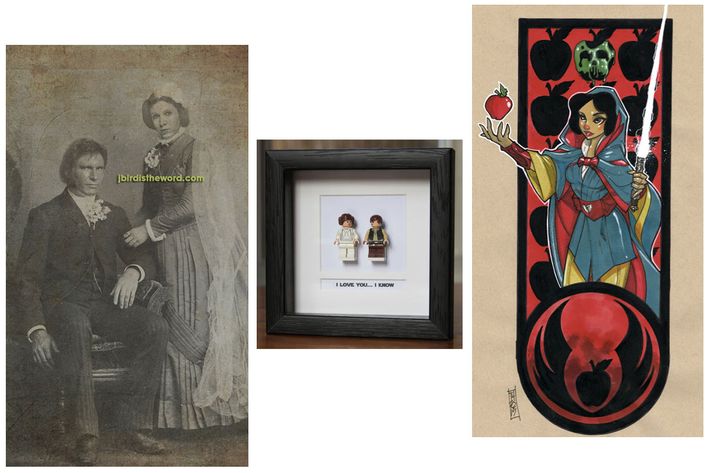 19. Old-Timeist
Han Solo and Leia Organa Wedding, $39
Sure, this imitation lithograph print is mildly creepy now, but just wait until, late one night, you briefly glance at the picture and see Jar Jar Binks in 1800s clothing in the background.

20. Cutest
Star Wars Framed Mini Figures Han & Leia Made From Lego, $62.32
Han’s famous line is an objectively terrible way to respond to an “I love you,” but somehow, we can’t help but awwwww.

21. Most Internet (Tumblr edition)
Jedi Snow White, $400
Stranded in wilderness, given life advice from people shorter than they are, hunted by their own parental figures — Snow White and Luke Skywalker have a ton in common. 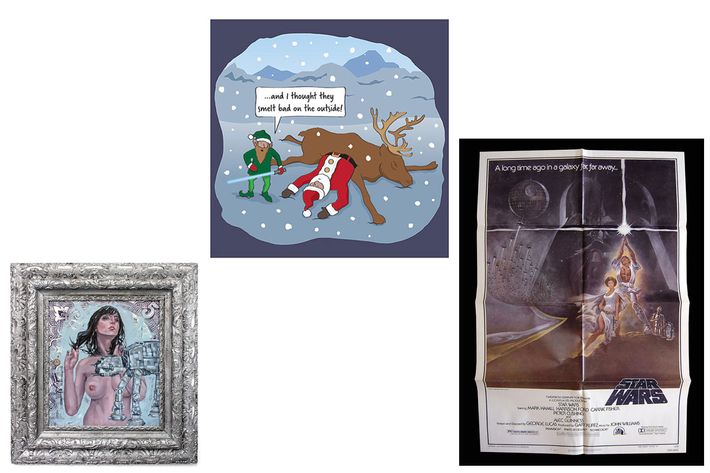 22. Most Internet (Reddit edition)
War Machine, $875
“Wait, what do you mean, you have to go? We were having such a nice Tinder date! Is it something I said? Can I at least text you sometime?” 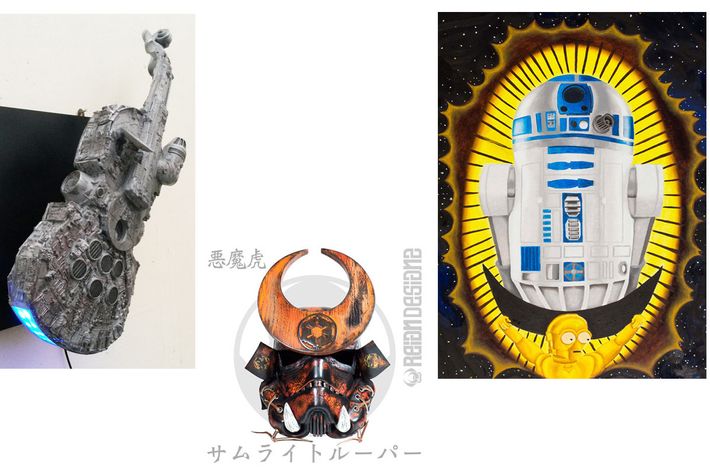 25. Most Obvious Metaphor
Millennium Falcon Violin, $700
Remember that Mad Men episode where Ken Cosgrove writes a story about a gold violin that’s beautiful but impossible to play? This is the Star Wars version of that. Except instead of being a metaphor for the confines of 1960s gender roles, it’s a metaphor for the ways in which Hollywood tentpoles never satisfy their obsessive fandoms — yes, definitely that.

26. Most Kurosawa
Demon Tiger Samuraitrooper Helmet, $725
Have you seen the video essay that compares Star Wars to Akira Kurosawa’s The Hidden Fortress? We guarantee that whoever has bought this “Samuraitrooper” helmet has. And that can explain the midcentury Japanese director’s influences on George Lucas in great detail. You won’t even have to ask. 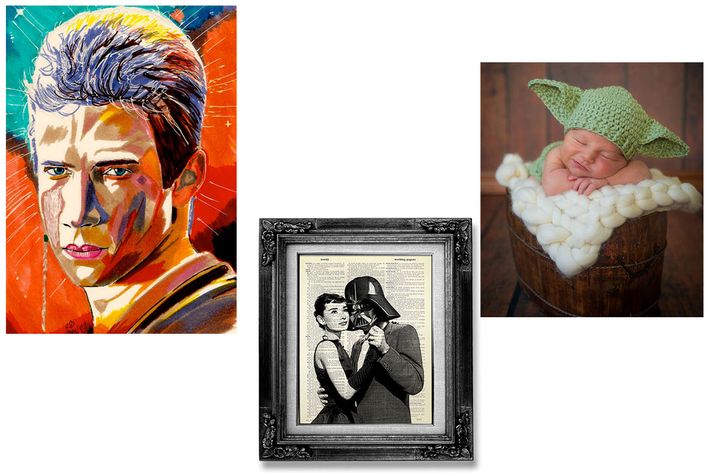 28. Most Christensen
Anakin Skywalker, $15
Because who hasn’t wanted 8” by 12” of glorious Padawan rattail?

29. Best Way to Start Early
Star Wars Baby Hat Yoda, $34.95
Doomed to a life in the Star Wars universe, this child is.

30. Most Etsy
Darth Vader Star Wars Art Print, $15
It’s a perfect distillation of two of the most easily available pop-culture signifiers known to our culture, but really, it’s possible this painting only exists so that we can make this incredibly lazy joke: That’s no moon … river!

overnights 8:00 a.m.
The Kardashians Recap: Pardon Their French If only Kim’s dad could see her now.
profile 7:00 a.m.
‘The Goal Is to Get As Bright As Possible’ For the highly prolific writer Akwaeke Emezi, literary success is a spiritual calling.
By Maya Binyam
last night on late night 12:03 a.m.
John Mulaney and Andy Samberg Filled In on Jimmy Kimmel Live! Because Kimmel has COVID again.
last night on late night Yesterday at 11:18 p.m.
WWHL Made Christine Quinn Have a Selling Sunset Reunion Do-Over Andy Cohen grilled Quinn on her COVID diagnosis timeline.
theater review Yesterday at 10:56 p.m.
In Exception to the Rule, Detention Is a Whole Other Class of Punishment Dave Harris’s play goes into an after-school penalty that’s not really intended to teach lessons.
overnights Yesterday at 9:30 p.m.
The Real Housewives of Beverly Hills Recap: Tabled Discussion Supposed empath Sutton is at the center of two boring, petty fights that don’t amount to much.
solidarity forever Yesterday at 8:05 p.m.
Squid Game Season Two Wants Us All to Just Get Along Solidarity forever!
let's go party Yesterday at 7:12 p.m.
Greta Gerwig’s Barbie World Keeps Getting Bigger Issa Rae, Hari Nef, and Michael Cera are the latest to jump in.
hot goss Yesterday at 7:07 p.m.
Rumormongering Joins the Cast of Greta Gerwig’s Barbie Triple-cast Ken and Barbie makes it safe. Triples are best.
the industry Yesterday at 6:22 p.m.
Members of Scott Rudin Broadway Productions Freed From NDAs Including actors and stage managers on To Kill a Mockingbird and West Side Story.
sorry to bother you Yesterday at 6:11 p.m.
Armie Hammer True-Crime Special Will Detail 5 Generations of Family Sins Father, son, and House of Hammer.
vulture 10x10 Yesterday at 4:01 p.m.
The Lightning Puzzle 18-Across, Three Letters: The ‘R’ in “The Sopranos” logo is one.
under oath Yesterday at 3:40 p.m.
Amber Heard’s Ex–Best Friend Testified ‘Hair Was Ripped Out of Her Head’ Amber Heard’s sister also took the stand.
swiftology studies 101 Yesterday at 3:17 p.m.
Dr. Taylor Swift Diagnoses NYU Grads As Cringe “No matter how hard you try to avoid being cringe, you will look back on your life and cringe.”
she *and* him? in this economy? Yesterday at 3:10 p.m.
Ahead of Their Brian Wilson Tribute Album, a Very She & Him Q&A Zooey Deschanel and M. Ward on the Beach Boys, harmonies, and why their band has lasted this long.
now streaming Yesterday at 3:00 p.m.
Checking in on Netflix’s Original Movies: May 2022 Edition A Rebel Wilson rom-com, a World War II espionage thriller, a Bollywood genre mashup, and more.
rendezcruise Yesterday at 2:32 p.m.
Tom Cruise Is Being Boring at Cannes The once-infamous agent of chaos has overcorrected his press strategy as he promotes Top Gun: Maverick at the French festival.
burners Yesterday at 2:09 p.m.
A Celebration of Life for Margot Robbie’s Alleged Letterboxd Account Fans found an account appearing to belong to the Barbie star … then it went dark.
overnights Yesterday at 2:00 p.m.
Conversations With Friends Recap: You Are The Bane of My Existence Okay, so maybe having an affair with an older married man is more challenging than it initially seemed.
close read Yesterday at 2:00 p.m.
Tom Cruise’s Last Stand Thirty-six years after the original, Top Gun: Maverick eulogizes the actor’s entire career, and an America that may not exist anymore.
By Bilge Ebiri
More Stories