Comic-book writer and artist Chip Zdarsky has had quite a year. In addition to continuing his work on the award-winning Sex Criminals, he also launched three new books: Howard the Duck, Jughead, and Kaptara. A collected version of Kaptara’s first story arc is out this week, so we talked to him about cat tanks, internet trolls, and sympathy for artists. You can read or download the entire second issue of Kaptara here.

What is the elevator pitch when people ask you to describe Kaptara?
It’s changed a fair amount since I originally brought it to Image. When I first pitched it to Eric, the publisher there, I basically said it was like a planet filled with action figures on a Wizard of Oz–style quest, but I seem to have fallen in love with the He-Man aspect of the action figures, and narrowed it down to “He-Man meets Wizard of Oz for adults.”

That mix becomes very apparent in the last spread of issue five, which is crammed with ridiculous heroes.
Yeah, no kidding! Those figures aren’t even that far off from the reality of He-Man figures. No matter how absurd you try and make He-Man-style analogs, they always end up being almost exactly He-Man-style figures. 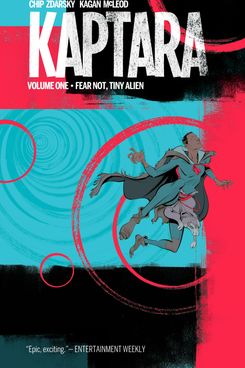 As an artist and a writer, what’s the division of labor on the comic? How do you work with Kagan McLeod?
It’s super-easy because we’ve known each other since art school, and we shared a studio in the early 2000s. We live in the same city, we’re good friends, so there’s no kind of feeling each other out. I trust him so much and the whole basis for the book was designed so I could work with Kagan. He’s so creative and he’s so good at creating these dumb musclemen with giant Judith Light hair that the process is insanely easy.

For instance, the cat tanks — which are probably my favorite creation of his — that started with me saying, “Well, they need to ride something, so some sort of like cat-style tank” but what ends up on the other end is so magnificent and disgusting and adorable at the same time. I don’t know how he does it.

I love the cover of that second issue with the cat tanks. It was a great teaser.
It’s funny because we did a bait-and-switch. The first issue was very sci-fi to get us to the planet and then it had the twist at the end when you see the ludicrous characters that inhabit the planet, and that’s when it goes off the rails. I think issue two represents the comic better than issue one.

I was wondering if you could talk about the sense of humor in the comic and what you’re going for there.
Stuff like that’s a little hard to describe. It’s an extension of what made Kagan and myself laugh a lot when we worked together in the studio. There’s a fun to be had with having a normal person interact with these outlandish characters, and to react as a normal person would — not to just get right into it and be a hero. I always feel like the humor coming from Keith is the stuff that would come from myself and my friends if we were in this outlandish scenario. I like that contrast.

I write the jokes as if I were in the situation, but so much of the humor also comes from the illustration, the artwork that surrounds it. You can laugh at the image of the cat tank, or any image of Dartor makes me laugh. The Motivational Orb is just a ball with arms but somehow Kagan draws him in such a way that I still laugh whenever I see a drawing of them, which is a testament to his abilities.

How did the idea of the Motivational Orb come about?
It happened in probably 2001, 2002? It was a one-off joke. I think we were just coming up with characters for fun, and then an interesting thing happened. We shared a studio with Cameron Stewart — he writes Batgirl now and did Fight Club 2 recently. And so back when we were in the studio, he was doing Seaguy with Grant Morrison and he needed a giant spread of all-new superheroes to fight some big galactic bad guy. And Motivational Orb is one of the ones that I gave over to him to put into that spread. In 2001, 2002, you can see just a tiny ball floating in space with a bunch of superheroes that we all came together and came up with.

So are you saying Kaptara ties into this other series?
To Seaguy? [Laughs.] Yeah, it’s all one big Grant Morrison universe, we’re just living in it. It was a running joke in the studio back then because a lot of us came up with a bunch of characters for that and we’d always poke Cameron and bug him and say we had copyright claims on Seaguy now, because we have these dumb characters in there. When the royalties come in, we expect something, even though we just volunteered these dumb characters for the briefest of appearances. Now, I guess he could turn it around on me and ask for money from Kaptara.

The characters I most recognized as an analog to something I’m familiar with are the Glomps, fat troll-like figures who resemble a YouTube comments section. As someone who spends a lot of time online, I know that archetype. What made you want to introduce that sort of character?
We knew we wanted to have Smurf-style characters, and for them to be reprehensible. The idea of Kaptara — the planet itself — is that there’s no overt racism or homophobia or sexism or anything like that. They took care of that. Now, they’re in a post “-ism” society. But nature abhors a vacuum, so I like the idea of all the bad traits just being relegated to one weird species that basically self-exiles into the forest. I didn’t take one group or anything, but once you add all of those characteristics to a weird little troll in the forest, it all of a sudden becomes very representative of very specific groups. They’re so much fun to write. I want to keep bringing them back because there’s something so fun about seeing the shit kicked out of hatred-filled creatures.

As for other work, what’s next for Sex Criminals?
What we’ve been doing over the past couple issues, and the remaining two that round out this arc, is collecting new characters with these abilities. The ultimate idea is to create the Ocean’s Eleven of sex. We want to bring the heist aspect back but also expand the scope. The plan has been to utilize them as a group for one grand heist, which is going to be a ton of fun.

How do you decide what parts of the sexual spectrum to focus on?
Most of that’s left up to Matt [Fraction, the writer]. It’s mostly what’s interesting to us, what helps the story. We introduced Alex in the last issue, who’s asexual, and that just seemed like an intriguing idea in a world where the powers revolve around sex. To have a character be asexual, what triggers the power? How do you represent an asexual character in that context or in any context? I’m working on the other comic that has an asexual character, which is Jughead, so now I’m the asexual guy.

I feel like the entire Archie universe is asexual.
No! They’re all horned up! They’re all raring to go, except for Jughead. He’s the one that’s on the outside, looking at them and being like, “What the hell’s wrong with you?”

You just started a new arc on Howard the Duck, and I thought that second issue was really interesting, because it doesn’t focus on Howard at all.
There’s one panel featuring Howard’s face and that’s it. It’s a unique challenge that has been a long time coming — it was part of my initial pitch a year and a half ago. I knew I was building to this, with these two new characters [female clones of Howard and Rocket Raccoon], showing the sadder, darker side of those fun adventures. The editor, Will Moss, has been so supportive that he allowed me to do that, especially after the relaunch. To do that with an issue No. 2 is commercial suicide in some ways. The response has been pretty overwhelmingly positive.

When you’re writing but not drawing a book, do you find that your background as an artist gives you a leg up?
I am sensitive to the fact that if I have to write a scene that takes place in a classroom full of kids, I will stop and double-check to see if it really needs to take place in a classroom full of kids, because I know how long that takes to draw. It depends on these artists, too. Like for Kagan, I set the comic on an alien planet because I know Kagan doesn’t like to draw cars and he gets bored with buildings pretty quickly, but he’s so good at organic stuff. I know Erica’s got crazy time constraints because she’s doing Squirrel Girl at the same time, so I try and keep the panels per page a little loose. And Joe, I just like torturing him. One issue of Howard, I had a scene set at a comic convention in space, which is just the worst thing you can try and get someone to draw. I’m a monster, when it comes to Joe. But I’ve made it up to him by setting the next issue of Howard entirely in space. All he has to do is just figures floating.

I can also instinctually feel a page a bit better from the artist standpoint. I understand where establishing shots are going to be without actually having to type out “Oh, by the way this is the establishing shot.” At first it was a little weird, because I have a specific picture in my head. Trusting the artist really helps. I’m working with Joe [Quinones], Erica [Henderson], and Kagan [McLeod] as my artists and they’re all insanely talented and talented in different ways, too. They’re all better artists than me, too, so that’s kind of upsetting.