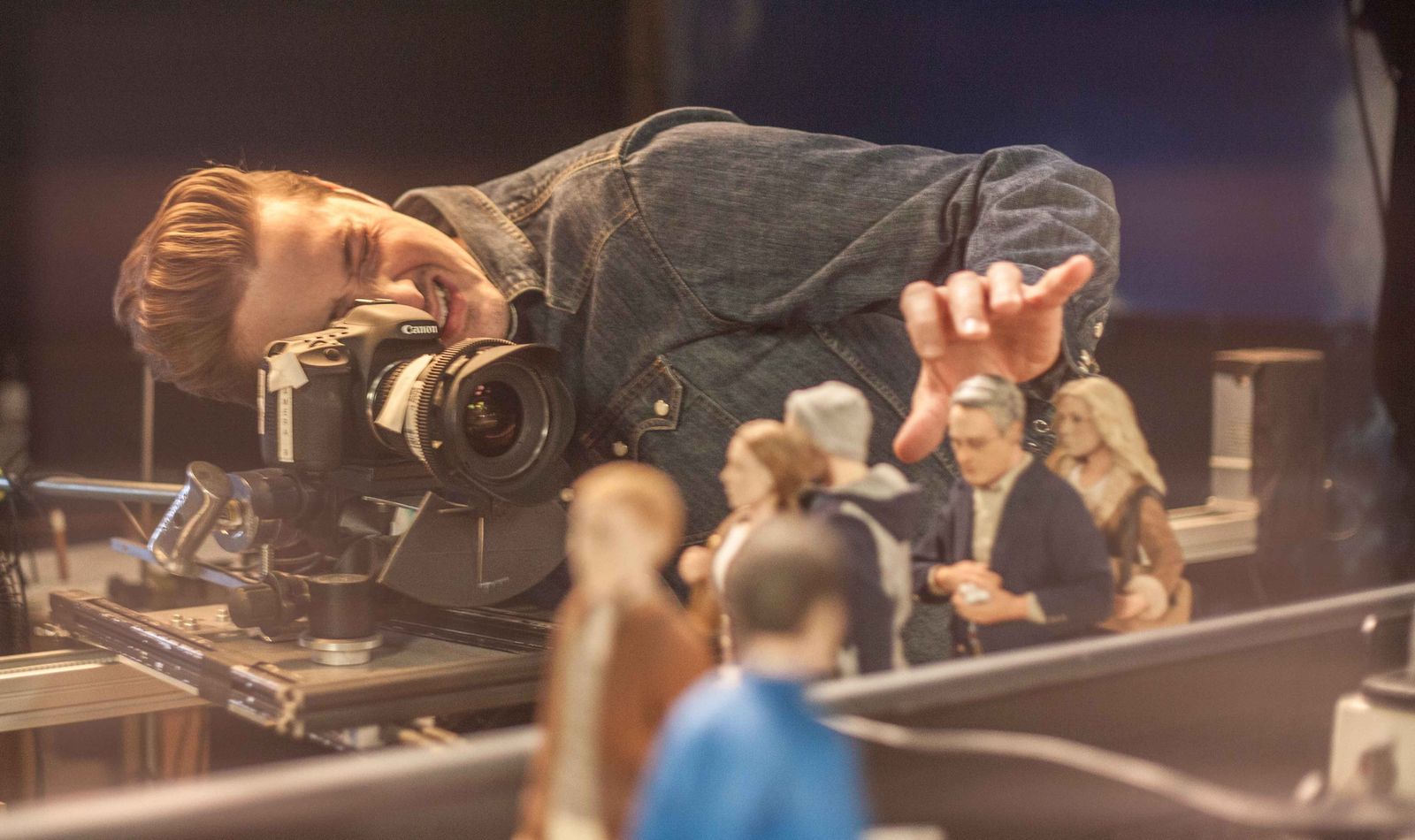 Duke Johnson on Making the Darkest, Most Anatomically Correct Puppet Comedy Ever

“You’re trying to get these subtle, nuanced human experiences out of dolls.”

“There were a lot of penises,” says Duke Johnson. “They break very easily because they’re tiny.” We’re talking puppets — or, actually, puppet anatomy — because Johnson has graciously agreed to walk us through the technical challenges of Anomalisa, the animated feature he co-directed with Charlie Kaufman. At times, he’ll need to act out certain details. (This was not one of those times.)

For anyone foggy on the specifics of stop-motion animation, the main thing to know is that progress is measured in infinitesimal steps. Some of those steps are literal: A simple heel-to-toe movement could demand as many as 48 frames, which will result in two seconds of action, which generally amounts to one minute of bankable footage per week. This is why it took the directors and a team of 32 animators a year and half to complete Anomalisa. It’s really hard for puppets to hold a martini. It’s even harder for them to have sex. Anomalisa’s protagonists do both.

“That might be one of the hardest shots ever attempted in the medium,” says Johnson, 36. “It took six months.” The St. Louis, Missouri, native laughs when I ask if he always possessed superhuman levels of patience. “No, I think I had ADHD as a kid,” he jokes. “Except when I was drawing. I could draw for hours.” Johnson jumps up from his chair in the eerily empty conference room of the Four Seasons in Beverly Hills for a demonstration of the difficulties posed by the movie’s much-discussed sexual congress. Slowly, he removes his jacket, and as it slinks down his narrow frame, he points to the ripples in the denim. “Movement and physics: These are the fundamentals of animation,” he says. “You don’t notice that stuff if it’s done well, but if fabric or liquid or hair moves weird, your brain is like, Wait, that’s not real.”
Funny as talk of miniature genitalia might make it sound, Anomalisa is also an adaptation of a Kaufman play, and the Oscar-winning writer of Eternal Sunshine of the Spotless Mind is not going to co-sign a puppet-sex gag à la Team America. In fact, with the exception of a scene in Being John Malkovich, which he also wrote, Kaufman never intended to do anything involving puppets. But writer-producer Dino Stamatopoulos caught Anomalisa when it was originally staged as a sound play in 2005, with the same cast doing line readings only, and asked Kaufman for the script to take to Starburns Industries, the production company he co-founded with Community creator Dan Harmon, among others.

“We were looking for things to produce in stop-motion,” says Johnson, who has worked with Stamatopoulos on his Adult Swim series Moral Oreland Mary Shelley’s Frankenhole, and who joined Starburns to direct their first project, Community’s Rankin/Bass homage episode “Abed’s Uncontrollable Christmas,” which went on to win an Emmy. “Dino and I always felt that the medium could be used to tell more adult-themed, deeper emotional stories.”

Anomalisa fit the bill: On a business trip in Cincinnati and on the verge of a midlife crisis, a disaffected motivational speaker named Michael Stone (voiced by David Thewlis) has an extramarital affair with the sweet, insecure Lisa (Jennifer Jason Leigh). In many ways, the puppets crystallized certain conceits of the play. For instance, to Michael, every character, with the exception of Lisa, sounds exactly the same (Tom Noonan supplies the voice). Thus, the 120 or so puppets that Starburns Industries assembled as extras actually share the same face, just with different hair, eye, and skin colors. “We took all the people that were in the studio and Photoshopped their faces on top of each other to get this generic amalgamation, and a sculptor interpreted that,” explains Johnson.

Likewise, the seams in the puppet heads, which meet at the eyes so that animators can combine hundreds of different 3-D-printed brows and mouths to achieve expression and performance, and which are usually erased in postproduction, were left untouched. In profile, they resemble masks. “That adds a soulfulness to the experience, an awareness that these things are being manipulated,” says Johnson. “It makes them feel fractured and vulnerable. We didn’t want to hide it.”

Perhaps most important to Johnson is that Michael and Lisa didn’t resemble the actors. He wanted the pair “to look average, not ugly, but like real people.” Michael is modeled after Johnson’s ex-brother-in-law. (“He’s a midwestern guy, works for Bank of America,” he says. “He’s handsome, but his nose is a little pointy and crooked.”) Johnson and producer Rosa Tran found their archetype for Lisa when they spotted unknown actress Leslie Murphy eating lunch in L.A.’s Los Feliz neighborhood, though they changed the puppet’s corresponding physique to make her less petite. “We paid very close attention to detail,” says Johnson. “Her breasts are asymmetrical, which is not what you would see in normal animation — everything is very symmetrical — but that’s not how breasts are.” They also added a scar by her eye, the source of Lisa’s self-consciousness, even though it was never explicit in the script. “That was Charlie’s biggest resistance to doing this, that we had to visualize these things,” he says. “But it gave her a nice habit to always be checking to make sure her hair is covering that.”

It was this degree of detail that also made the challenges manifold. “You’re trying to get these subtle, nuanced human experiences out of dolls,” he says. “You’re never not aware that you’re watching puppets, but there’s times when you’re involved in the emotional experience of these characters, and that’s exciting.” To this end, Johnson and Kaufman wanted verisimilitude from their 12-inch puppets so that when, say, Michael emerges from a shower and bends over to towel off, “his fat rolls bend like a human’s.” But the silicone that coats a puppet’s armature is stiff and unrelenting. Of the 20 Michael puppets, the ones that were going to appear naked had to be first cast in a special gel with a thin layer of silicone that allowed more manipulation. Every body hair — armpit, nipple, pubic — was individually inserted.

Michael’s interaction with objects was even more painstaking. For him to nervously twist the stem of his sweaty martini glass and then down the drink required a wire that ran from his thumb through the drink to his forefinger and about 80 resin-sprayed, Barbie-size martini glasses, each with a decreasing amount of liquid resin.

Which gives you a better idea of what it must have been like to stage the puppet cunnilingus. “It’s the martini glass times a million,” says Johnson. Whereas for other scenes, the animation team shot reference video of themselves for closer study — Johnson tripped on a foam mat about a thousand times to give the animators something to work off of for Lisa’s fall in the hotel hallway — in this case, actors were hired to enact the physicality. “They weren’t acting emotionally, they were going through the movements: scooting back on the bed, pulling the comforter,” he says. “At one point, [the actress] hit her head, and I was like, ‘That’s perfect. That’s something people do.’”

Often, the animator might shoot a few seconds of footage only for Johnson or Kaufman to point out that something wasn’t quite right with Lisa’s expression. “Puppets interacting with other puppets is super complicated,” says Johnson. “You’re juggling ten balls instead of three.”

Which finally brings us back to the multitude of penises — exactly how … realistic were they expected to be? “Oh, there’s a limp one and an erect one,” says Johnson. The latter might require Ben Affleck–in–Gone Girl levels of scrutiny to spot. I certainly didn’t. “It’s in there for a couple of frames,” he assures me. “We squeezed it by the MPAA.”

+Comments Leave a Comment
Co-Director Duke Johnson Talks Anomalisa
timelines 26 mins ago
The Complete History of Ezra Miller’s Controversial Career From kidnapping allegations to pleading not guilty to felony charges to the DCEU’s master plan.
theater 6:46 p.m.
Becky Nurse of Salem’s Dark Brew of Witchery and Dunkin’ Deirdre O’Connell nearly holds together Sarah Ruhl’s play set in modern Salem.
trailer mix 6:37 p.m.
Shudder Acquires Viral Horror Movie Skinamarink It opens in theaters January 13, 2023.
bong hive 6:36 p.m.
Robert Pattinson Awakes From Cryogenic Sleep As Mickey 17 Bong Joon Ho’s Parasite follow-up has a teaser trailer.
the law 6:24 p.m.
Naomi Judd’s Family Has Filed to Dismiss Lawsuit Over Her Death Records In part because journalists are not seeking photos or body cam footage.
explainers 6:03 p.m.
The Biggest Questions Ahead of the Tory Lanez–Megan Thee Stallion Trial Here’s what could happen at the high-profile trial, where Megan has accused Lanez of shooting her in the foot.
vulture lists 5:00 p.m.
Every The Office Christmas Episode, Ranked From Belsnickel to Benihana.
un-plussed 4:25 p.m.
Are They Really Just Gonna Call It ‘Max’? HBO Max and Discovery+’s new combined streaming service is getting closer to picking a name.
sad girls rise 3:41 p.m.
SZA Puts Fans on Alert, Announces New Album S.O.S And a Phoebe Bridgers feature is spotted in the full track list.
overnights 3:14 p.m.
George & Tammy Series-Premiere Recap: Playin’ Possum H-E-double-L breaks loose in Nashville when Tammy Wynette meets George Jones.
my single is dropping 2:25 p.m.
All Caroline Polachek Wants for Valentine’s Day Is Desire Welcome to her island.
toasts and roasts 2:15 p.m.
At the Kennedy Center Honors, George Clooney and U2 Get Their Flowers Gladys Knight, Amy Grant, and Tania León were also celebrated during one of Washington’s most star-studded events of the year.
gma3 goss: what you need to know 1:27 p.m.
T.J. Holmes and Amy Robach’s GMA3 Flirtfest Is Going on Hiatus Holmes and Robach simply “have the day off.”
trailer mix 1:18 p.m.
You People Are Coming to Dinner Kenya Barris and Jonah Hill’s take on the rom-com hits Netflix on January 27.
emergency discussion 1:15 p.m.
How Is His Dark Materials Going to Pull This Off? The series’ final season takes on the difficult task of translating many heady, absurd, and arguably heretical elements from The Amber Spyglass.
*beyoncé voice* texas 12:51 p.m.
Guns N’ Roses Is Suing a Texas Arms Dealer That Stole Its Name “As well as its gun sales, the store also sells a small amount of roses …”
vulture 10x10 12:00 p.m.
The Mennonite Puzzle 16-Across, Three Letters: Song title for Zayn, Harry Styles, or Kiss.
gorgeous gowns 11:32 a.m.
Julia Roberts Was Festooned in Cloon at the Kennedy Center Honors New meme format dropped!
best of 2022 11:00 a.m.
The Best Comedy Specials of 2022 The year’s best releases had some urgency behind their existence: capturing this thing at this moment.
By Kathryn VanArendonk
2022 kennedy center honors 9:50 a.m.
Borat Showed Up at the Kennedy Center Honors to Make the Bidens Uncomfortable Sacha Baron Cohen, in the guise of the journalist from Kazakhstan, paid tribute to honorees U2.
More Stories