After last year’s curiosity, NBC rebounded with a live event that was hard to find fault with — we were too busy feeling every damn moment of the The Wiz. Shanice Williams’s debut! Mary J.’s contouring! The sweetest cast ever? Call them lows if you like, but our critiques here amount to what we wanted to see more of, not less. Take us even higher, Wiz.

Shanice Williams had a stellar debut.
While the cast was stacked with mind-boggling talent, the glue that held everything together was Dorothy. Not only does she have to play the relatable character in a strange and wild world, she had to be the one who takes us on an emotional journey. All of it culminated in a stunning final solo where she brought it on home. And may we remind you, she is only 19 years old.

The writing.
Harvey Fierstein adapted William F. Brown’s 1975 classic for last night’s live-television production,and with lines like “Home is something that’s got to be earned,” “Guilty of murder in the house degree,” and “You don’t even got game enough to be wicked,” he kept the spirit and grace of the original while making it amusing for modern audiences.

Feminista Jones’s #jonesingforthewiz tweets.
One of the best parts of this show was it felt like Twitter was suddenly a nice place to be. But the standout was Feminista Jones, who, like your best college professor, put the show in context of the black arts movement in the 1970s. (Read all her tweets here.)

The Wiz is the embodiment of Sankofa... the idea of "reach back and get it" or "return to your source", a common theme for Blk Power Movemnt

Uzo Aduba dazzled as Glinda the Good Witch.
While most audience members know Uzo Aduba as Suzanne Warren from Orange Is the New Black, she’s a theater kid at heart. (Before nabbing her Emmy-winning role, she was in a Broadway production of Godspell.) Aduba didn’t show up till the very end of The Wiz, but when she did, she completely commanded the stage. And when it came to her solo, “Believe in Yourself,” she sang with so much heart, it almost felt like there was no TV screen separating us from her.

The hair-and-makeup team.
The hair-and-makeup game was on point here, with special shout-outs to Mary J. Blige’s contouring and Queen Latifah’s Wiz wig. Details were key: With cameras that zoomed in and out on our leads, metallic lipshades looked great from afar and up close. There was even a hint of silver on the Tin Man’s teeth — nice touch, team makeup! 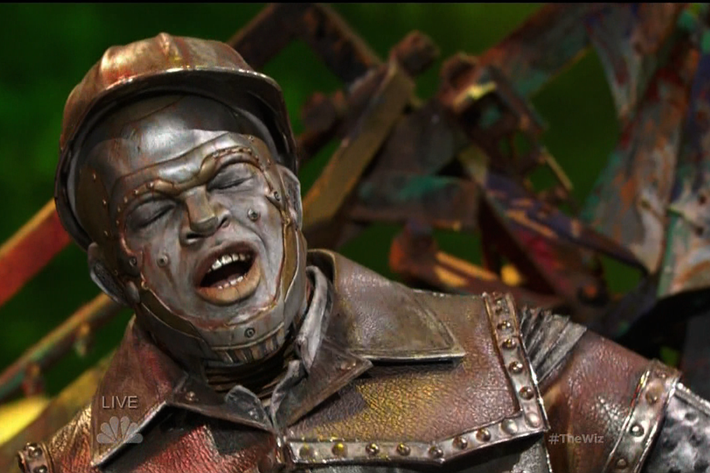 Incorporating Cirque du Soleil dancers.
Having Cirque du Soleil act as a co-producer was a masterful decision, and their influences could be felt throughout the production design, with their soaring sets and psychedelic, candy-colored costumes. You felt it especially during the dance numbers where the poppy flowers waxed creepy and sexy and the Emerald City crowd was channeling Andy Warhol’s Factory and Harlem ball culture.

Fatima Robinson’s choreography.
Fatima Robinson is already a legend. By the time she was 21, she had already choreographed Michael Jackson’s Egyptian-themed extravaganza “Remember the Time.” She went on to choreograph works for Aaliyah (“Rock the Boat”), Mary J. Blige (“Family Affair”), and the Black Eyed Peas ("Hey Mama” and “My Humps”). Last night she outdid herself on The Wiz. The Tin Man was dabbing. The Crows were doing the Nae Nae. Scarecrow did the stanky leg. It was a beautiful tribute to black dance culture that covered everything from the Electric Slide to the balls of the mid-’80s. Hats off.

Too many commercial breaks.
NBC scored some big advertisers here, from Rihanna’s latest Anti promo to Mary J. Blige dancing with a knife for Apple. But could they at least have planned their cuts in and out of scenes more gracefully? Next year, let’s bring this into the digital age and ease those transitions by Periscoping the cast during breaks.

Where’s the orchestra?
You know, for a production about hidden labor, there was a lot of hidden labor.

Bad special effects.
Ms. Amber P. Riley sang her heart out last night as Addaperle, the Good Witch of the North, but wasn’t she supposed to blast off at some point? It looked like the camera cut away from her abruptly. And was having Evillene slowly back into a cloud of smoke the only way to make her melt after being splashed with a bucket of water? A few corners must have been cut in the special-effects department.

No one did the Shmoney Dance.
The choreography was amazing, but it would have been more amazing if the Wizard snached off someone’s weave, threw it in the air, and proceeded to do the Shmoney Dance in honor of Bobby Shmurda’s rumored release.

How about an ending?
After Shanice Williams’s closing number, you would think that there would be some fanfare — some bit of affirmation that we had just collectively watched an incredible live production. Nope. Only when a promo for Nightly News With Lester Holt came on did your Vulture editors finally process that maybe the production was over. Where was the curtain call? Where were the bows? Part of this would have been solved by a live studio audience to give the production the standing ovation it deserved.

+Comments Leave a Comment
The Highs and Lows of The Wiz Live!

close read 27 mins ago
House of the Dragon’s Brutal Birth Obsession Isn’t Realism. It’s Cruelty. In three separate instances, the Game of Thrones prequel reduces a birthing woman to the limits of her body.
on the record 2:09 p.m.
A Timeline of Black Panther: Wakanda Forever Taking Forever Kevin Feige explains why Marvel didn’t recast T’Challa, while Lego appears to spoil the identity of the next Black Panther.
midnights era 1:52 p.m.
Wait, Is Taylor Swift Just Giving Us Straight Answers? Midnights track seven is called “Question…?”
gamer time 1:20 p.m.
The Last of Us Teaser Arrives on The Last of Us Day Bella Ramsey and Pedro Pascal star, along with Storm Reid as Riley.
vulture 10x10 1:13 p.m.
The Defiant Puzzle 9-Down, Four Letters: Haircut for Joan Jett or Miley Cyrus.
unpressed 12:28 p.m.
Kiki Layne Isn’t Worried About Being ‘Cut’ From Don’t Worry Darling She got her man and her check.
fine lines 12:14 p.m.
Kelsea Ballerini’s Country Favorites Five classic lyrics that inspired the singer to cut loose on her new album.
the festival circuit 12:06 p.m.
A$AP Rocky Takes ‘Full Responsibility’ for Short Rolling Loud Set At least he brought out GloRilla.
housewives institute bulletin 12:00 p.m.
What in the Lisa Rinna M&M? The celebrities are sounding off about the ‘wives, and the RHOA ladies are pretty in peach at the reunion.
freaky friday 11:49 a.m.
Elizabeth Banks Could Do The Martian, But Could Matt Damon Do Cocaine Bear? “Matt Damon, love him. He’s having to figure out how to survive. I want that role.”
chat room 11:20 a.m.
House of the Dragon’s Matthew Needham Is Playing Larys As a Hero “He might seem completely mad, but it’s very methodical.”
one perfect scene 10:00 a.m.
A Hell of an Introduction How director Romain Gavras and his cast and crew created the year’s wildest movie opening.
By Bilge Ebiri
explainers 9:48 a.m.
‘No One Has Been Ruled Out’ of Facing Charges in Rust Shooting The state of New Mexico received funds to prosecute up to four defendants in the shooting.
book review 9:42 a.m.
When Grief Returns Again, and Again, and Again … In her time-looping novel The Furrows, Namwali Serpell’s deft use of repetition makes the plot feel dynamic even as she retells the same story.
vulture picks 8:00 a.m.
25 Notable New Releases Over the Next Two Weeks Bella Hadid joins Ramy, Hasan Minhaj’s latest Netflix special, Pavement reunites, and more.
overnights Yesterday at 10:10 p.m.
House of the Dragon Recap: A Bad Egg Like it was for the Starks in early Game of Thrones episodes, the stakes for child’s play are high for these little Targaryens.
overnights Yesterday at 10:00 p.m.
American Gigolo Recap: Even Faster, Johnny This week, American Gigolo gets a little sleeker (if not sexier).
fire and blood Yesterday at 10:00 p.m.
Who’s Who in Westeros: A House of the Dragon Character Guide Keeping up with the Targaryens after episode six.
overnights Yesterday at 9:00 p.m.
The Serpent Queen Recap: The Melon and the Eggplant Catherine and Diane are now united, which makes for great television.
obits Yesterday at 8:35 p.m.
Dale McRaven, Mork & Mindy and Perfect Strangers Creator, Dies The star-making producer was 83.
More Stories