The sixth and final season of Downton Abbey debuts on PBS this Sunday, which means it’s time to try to recall what the hell happened during Downton Abbey season five. A lot of time has passed since we last enjoyed some quality Crawley time — at least it has for those of us who didn’t already watch the U.K. airings of the sixth season — and a lot of stuff happens on this show. Like, didn’t Edith finally acknowledge that she has a child? Wasn’t Bates in jail? (Answer to that is always yes.) Oh, and didn’t Mrs. Hughes and Carson finally decide to make their unspoken thing a thing and actually get married? I’m pretty sure that happened, and yet it feels like some hazy butler-proposal dream that, weirdly, involved the phrase, “You old booby.” So, let’s officially refresh our memories with this list of key details from Downton Abbey’s fifth season that will tee (tea?) you up perfectly for that final go-round with Lady Mary.

The setting
When we last left Downton, we were celebrating Christmas in 1924. That means the season-six action will resume in 1925, the same year that both F. Scott Fitzgerald’s The Great Gatsby and the first volume of Adolf Hitler’s Mein Kampf were published.

Anna Bates: murderer?
Hey, remember Mr. Green, Lord Gillingham’s valet and the man who raped Anna in season four, then got pushed into an oncoming bus by an unseen shove-murderer? Well, even though he’s dead, his presence continues to hover over Downton Abbey like the unwelcome CGI ghost of Hayden Christensen in the special edition of Return of the Jedi.

Last season, despite a stunning lack of anything remotely resembling evidence, Anna Bates was arrested and accused of killing Green. Mr. Bates — who seemed like he might be responsible for the shove-murdering — confessed to the crime, the only way that anyone confesses to anything on Downton Abbey: by writing a letter. In the finale/Christmas episode, Anna was released on bail because of that letter. But we know Mr. Bates didn’t do it, because Molesley and Mrs. Baxter found a pub owner who supports Bates’s alibi at the time the shove-murder occurred. Given Anna’s history of “violence” — she once knifed her abusive stepfather in self-defense, because there is no limit to the amount of garbage that woman has had to endure — it seems likely that in season six, she will face trial, or get rearrested, or just generally be punished in some fashion because Julian Fellowes is an Anna Bates sadist.

Lady Mary and Matthew Goode, sittin’ in a tree …
So many things happened to our Lady Mary Crawley in season five: She got a boss haircut, she made Anna Bates buy her a diaphragm, she had sex with Tony Gillingham in Liverpool, then decided she didn’t feel like marrying him after all. That last piece of information is probably important to remember. But so is this: that she met Henry Talbot (played by the dashing Matthew Goode) and there were major sparks between them, and that if all goes well, they will fall in love in season six and he will, at no point, get run over by a lorry.

Edith owned up to being Marigold’s mother
After learning that the love of her life, Michael Gregson, is really, most sincerely dead, Edith committed herself to raising the daughter they conceived out of (gasp!) wedlock. Lord Grantham and Cora are aware that Marigold is Edith’s child, and so is Tom. Mary, however, is totally in the dark, so prepare for an entire season of Mary making rude statements about how Edith doesn’t know what it’s like to be a mom while Edith exchanges knowing glances with Cora while sipping tea from fancy cups.

Tom planned to move to Boston
After spending a last Christmas at Downton, Tom announced his plans to leave the U.K. and move to Boston, Massachusetts, where he can finally live among outspoken Irish people. (Sybbie, of course, is going, too.) My hope is that the new season will feature a Boston-set bottle episode that takes place during one eventful night at Cheers for Tom Branson and his new best Beantown buddies, played by Mark Wahlberg, John Ratzenberger, and Steven Tyler of Aerosmith.

Lord Grantham was, and will forever be, super–Lord Granthamy
He lost his beloved dog (RIP Isis) and his departing son-in-law and granddaughter, but he gained an ulcer, another granddaughter in the form of Marigold and the nickname Donk. Forecast for Lord Grantham in season six: continued stomach pains and grousing about how times are changing too quickly, with occasional periods of having a stick up his butt.

The Dowager Countess kept on Dowager Countessing
Good ‘ol Maggie Smith spent much of season five embroiled in orchestrating the reunion of Prince and Princess Kuragin, and also playing referee in the ongoing battle for supremacy between her lady’s maid, Denker, and butler, Spratt. She also said stuff like this. Because saying stuff like that is the Dowager Countess’s job, and will continue to be until the very end.

Isobel rebuffed yet another man
The mother of Matthew had an opportunity to remarry, but ultimately turned down Lord Merton because his sons, Tim and Larry — the two people with the least upper-crusty names in Downton Abbey history — are cock-blocking jerks who don’t want Daddy to give them a Stepmommy. Presumably Lord Merton and Dr. Clarkson, whose affections Isobel rejected back in season four, will both be sulking for the entirety of season six, pining for another taste of this:

Mrs. Hughes and Carson really are getting married!
In last season’s finale, he proposed in a horribly stilted and formal fashion, and she said, “Of course I’ll marry you, you old booby,” as was tradition in 1920s England. It’s all happening! So in season six, when Carson’s hotline blings, you know that can only mean one thing.

That’s right … it’s time to decant some red wine through a cheesecloth, just the way Mrs. Hughes likes it. 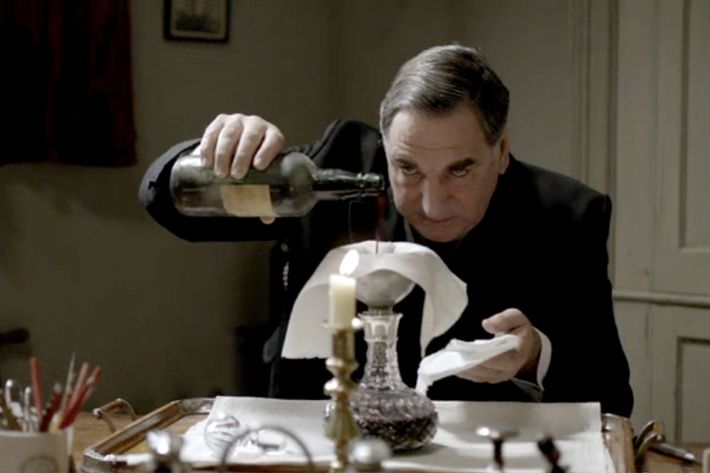