Vulture is speaking to the screenwriters behind 2015’s most acclaimed movies about the scenes they found most difficult to crack. Our first post of this season takes a look at Best Picture front-runner Spotlight. As screenwriter Josh Singer describes below, it was an early scene, featuring the introduction of a new character and the different perspective that he brings to the Boston Globe, that Singer and co-screenwriter/director Tom McCarthy found most challenging.

Before the real Marty Baron started at the Boston Globe in July 2001, he sat down with a number of the leaders at the paper. One of these sit-downs was with Walter “Robby” Robinson (Michael Keaton in the film), the head of the Spotlight team. According to Marty (Liev Schreiber), when he sat down with Robby, he had no idea what the Spotlight team was. And, having never spent much time in Boston, all he knew about the town was what he’d managed to read in books (and the Globe) in the three weeks prior. Robby, on the other hand, had gone to BC High and Northeastern, and worked for the Globe for over 20 years. Classic outsider versus insider, rife with tension and possibility. The scene should write itself, right? Wrong.

So, What the Hell Is Going on in Best Picture?
David Simon on Spotlight and the State of Media

This was the last scene we shot, and we were writing up until we handed it over to Liev. It’s not an overstatement to say that we worked on this scene for three years. We wrote it. And wrote it again. We put it down, picked it back up. Thought we were done. We weren’t. Introducing a character is always hard, especially when you’re trying to also get across a lot of exposition.

True, there’s a lot of information in the movie, but there were some very specific things we wanted to establish about the state of the newspaper industry. Context that’s hard to put into an actor’s mouth without making him or her sound like an expositional tool. We were struggling with Marty’s line involving the internet cutting into the classified business right up to the very last night of the very last day. It was a pretty wonky line, but one that was important to establish the looming seismic shift on the horizon of the news business: 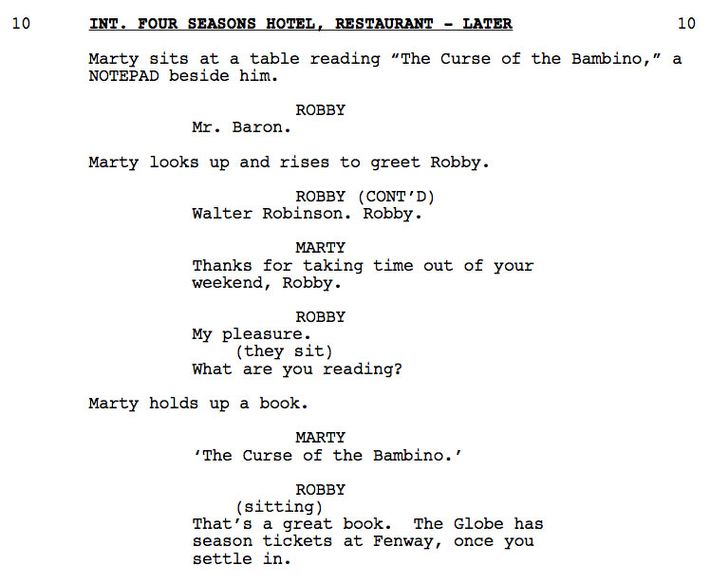 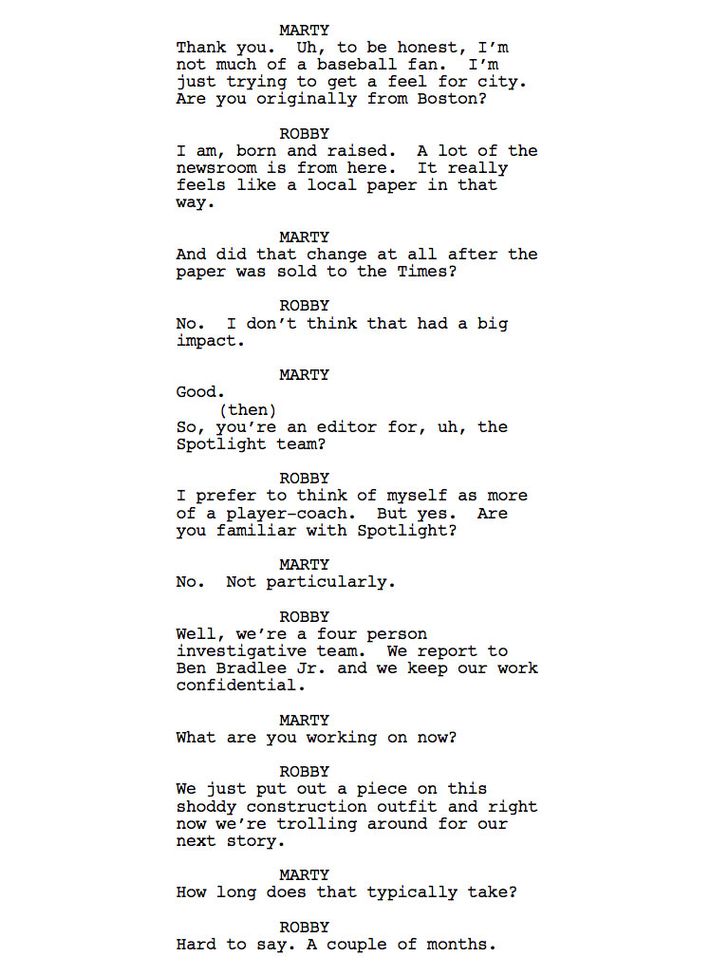 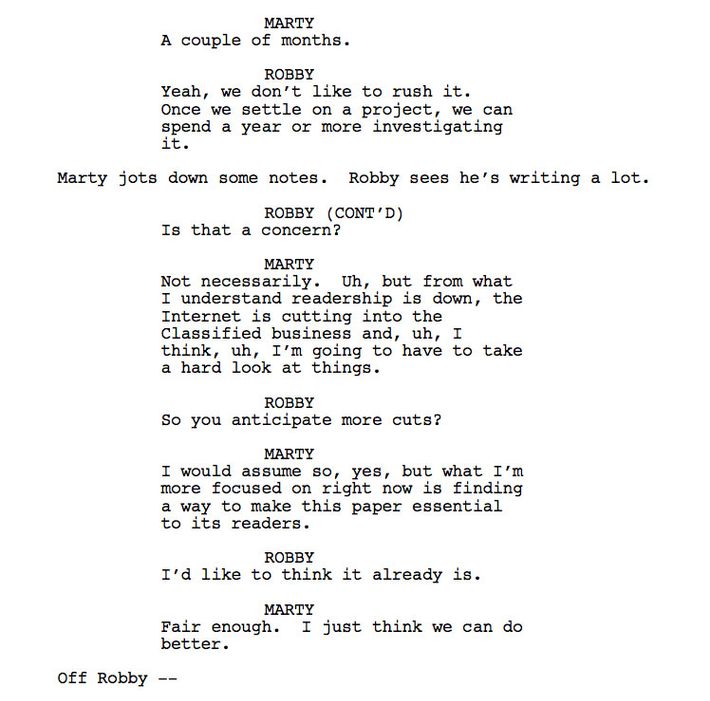 It’s funny — in a fit of pique, one of us said that working on the line made him want to beat his brains out. Suddenly, we heard Liev say behind us: “That’s how I feel every single day.” I guess the silver lining here is, well, maybe that’s how writing is supposed to feel.

+Comments Leave a Comment
The Toughest Scene I Wrote: Spotlight

chat room 15 mins ago
Raúl Castillo on The Inspection’s Unexpected Gallows Humor Even his brother thought the A24 military drama was “really, really funny.”
100 days of avatar 12:18 a.m.
All of the Avatar Sequel Announcements: A Timeline Avatar 2 has a name, it has a release date, and it has a way with water.
bye twitter Yesterday at 10:31 p.m.
All the Celebs Who Left Twitter “This place is a mess.”
fact check Yesterday at 9:50 p.m.
Sorry, But Tenoch Huerta Mejía Says Marvel Didn’t Touch His Bulge “I’m not going to lie to people.”
category is: categories! Yesterday at 8:04 p.m.
The 2023 Oscars Will Go Back to Celebrating All 23 Categories Live Apparently the Academy got tired of being dragged.
coming soon Yesterday at 5:40 p.m.
It’s a-Here, Mario! Chris Pratt, look how you massacred our boy.
on the record Yesterday at 3:37 p.m.
Will Smith, Oscars Hopeful, Is Very Sorry About the Slap “Hurt people hurt people,” Will Smith told Trevor Noah while promoting his upcoming film, Emancipation.
hosts with the mosts Yesterday at 3:33 p.m.
Steve Martin and Martin Short to Tag Team Saturday Night Live Austin Butler has the easy, no-pressure job of following them up as host.
trailer mix Yesterday at 3:00 p.m.
Let the South Side Season-Three Trailer Repossess Your Heart The Rent-T-Own crew returns to HBO Max on December 8.
vulture lists Yesterday at 3:00 p.m.
16 Great Christmas Movies That Aren’t Christmas Movies Including L.A. Confidential, Three Days of the Condor, and You’ve Got Mail.
the need for rewatches Yesterday at 2:35 p.m.
Top Gun: Maverick Is Circling Back to Theaters Before It Hits Paramount+ Throttle up!
vulture festival 2022 Yesterday at 2:23 p.m.
Zachary Knighton Finally Got the Happy Ending That Happy Endings Didn’t Magnum P.I. restored his faith that shows can in fact be saved!
vulture recommends Yesterday at 1:58 p.m.
Pentiment Is a Miracle A medieval murder mystery is one of the best video games of the year.
vulture festival 2022 Yesterday at 1:57 p.m.
StraightioLab Finally Explains to Us What a Podcast Even Is Comedians Sam Taggart and George Civeris generously educated us on the audio format.
vulture 10x10 Yesterday at 1:47 p.m.
The Blanc Puzzle 21-Down, Four Letters: Word used 49 times in Beyoncé’s “Formation.”
trailer mix Yesterday at 1:24 p.m.
Red and Kitty Forman Deal With More Teens in That ’90s Show Topher Grace, Laura Prepon, and most of the original cast will return.
trailer mix Yesterday at 1:09 p.m.
Julianne Moore Is a 21st-Century Woman in When You Finish Saving the World Jesse Eisenberg takes on an A24 mom movie, starring Finn Wolfhard as the disaffected son.
tbs needs content Yesterday at 12:45 p.m.
Adam Sandler, King of Awards-Show Acceptance Speeches, Is Back His teen daughters “wrote” him a hell of a speech for the Gotham Awards.
last night on late night Yesterday at 12:13 p.m.
James Austin Johnson Sings, Croons, Shouts Through a Bob Dylan History Lesson With some impeccable impressions of the songwriter’s eras.
chat room Yesterday at 11:39 a.m.
Andor’s Kathryn Hunter Saw Eedy Karn’s Comedic Potential Immediately “She’s probably a thwarted woman herself, and she’s overcompensating with her son.”
More Stories