In the late 1980s and early ’90s, Satan was a recurring character in comics writer Neil Gaiman’s fantasy opus Sandman. This interpretation of Lucifer was effortlessly suave, titillatingly charismatic, and just the right amount of sinister. So Gaiman had a very simple, entirely reasonable instruction for the artists who drew the character.

10 Thoughts on David Bowie
Grieving David Bowie, a True Rock Star in Life and in Death

Decades later, writer Kieron Gillen and artist Jamie McKelvie wanted to craft their own manifestation of Lucifer in their hit comic The Wicked + The Divine — in this case, she’d be an androgynous and pansexual woman who’s shockingly good at convincing you to make the most indulgently dangerous decisions. So, of course, they shamelessly stole her likeness from the Thin White Duke. In honor of Bowie’s untimely death yesterday, Gillen even wrote a little side story for their Lucifer in which she meets Bowie, declaring, “Everyone says ‘be reasonable.’ But then I look at you, and everything you’ve achieved, and know that ‘reasonable’ is defeatist.”

Lucifer’s words could stand in for the internal monologues of awkward nerds around the world today. Few mainstream figures have cast so long a shadow in the world of non-mainstream culture. To wit: The geek-news site Bleeding Cool just published a roundup of comics creators, insiders, and critics publicly mourning Bowie. It’s absolutely worth reading — but block off some time, as it’s a lot longer than you might expect.

Then again, of course you should expect that kind of grieving from dweebs who bury themselves in all things fantastical and high-concept. David Bowie was nerddom’s impeccably styled patron saint. In the coming days and weeks, he’ll be compared to other departed musical megaliths, from Lou Reed to Otis Redding to John Lennon. And, yes, he was as sonically influential as all of them. But would Reed have dressed up as an effete Goblin King in Labyrinth? Would Redding have ever starred in The Man Who Fell to Earth? Would Lennon, donned in drag, have played anthemic story-songs about being a gender-fluid extraterrestrial? Only Bowie was crazy enough.

And the visuals! No wonder writer Sean T. Collins had such an easy time getting nearly 100 cartoonists to draw Bowie a few years back. Here was a guy who looked like he stepped out of a Curt Swan story about the spacefaring Legion of Super-Heroes: facial features both humanoid and otherworldly, limbs jangly but athletic, uniforms so outlandish that you couldn’t help imagining what you’d look like in them. Here was a guy who was obsessed with sci-fi and spoke in the pithy riddles of an Arthur C. Clarke alien, an international megastar who once gave a quote to the creator of an abstract graphic novel in which he said, “I always had a repulsive need to be something more than human. I felt very puny as a human. I thought, ‘Fuck that. I want to be a superhuman.’”

Therein lies the key. What made him so important to geeks was his utter lack of shame. As has been noted countless times, sci-fi, fantasy, and superhero fiction are especially appealing to those who feel like they live and think in society’s margins. If you’ve felt powerless in your daily life, you can draw strength from tales of strange power — especially power that allows you to escape the prison of your mild-mannered identity and become something more. A caped crusader or messianic alien doesn’t try to fit into a box; he/she/it inspires people to be a little better by embracing their weirdness. That’s what Bowie did every time he crooned in character to a crowd. 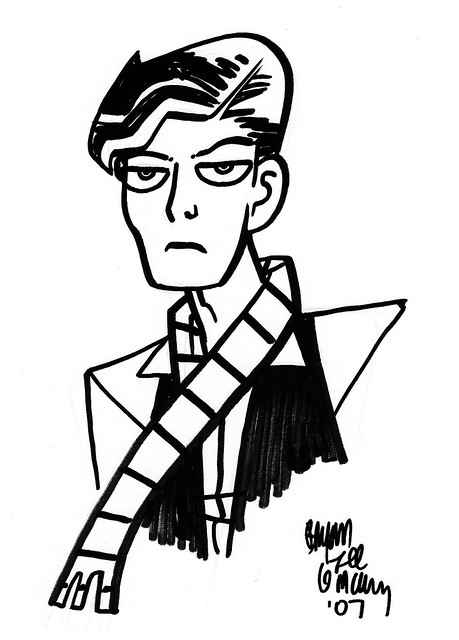 One last example of geeks drawing Bowie comes to mind. Adult Swim’s The Venture Bros. is a cartoon that aspires to mash up and celebrate every possible nerdy obsession, and when its creators revealed the identity of the Sovereign, a superpowered and benevolently megalomaniacal gentleman criminal, they chose to have him be David Bowie. Not just modeled after him; actually him.* At one point, when a character asks who he is, he replies, “Just some bloke who wanted to be anyone but himself.”

You can read that as a depressing statement. But for all of us weirdos who have dreamed of donning a Lycra jumpsuit and flying away from the painful existence that fate has dealt us, it’s a statement of hope. You can be something the naysayers will call ridiculous — and you can be beloved for it. Your strangeness can change the world. It’s wonderful to be different. Until people can shoot lasers from their eyes, David Bowie will have been the closest thing to a real-life superhero we ever got.

*An earlier version of this post incorrectly said the Venture Bros. character was not explicitly named David Bowie.

overnights 14 mins ago
The Righteous Gemstones Recap: The First Cut Is the Deepest What exactly is Eli capable of? The truth is horrifying.
cancellations 16 mins ago
FX Cancels Y: The Last Man Showrunner Eliza Clark has hope that the show will find a new home.
overnights 19 mins ago
The Real Housewives of Salt Lake City Recap: We’re Walking a Razor’s Edge The housewives “bond” as we head towards a “jaw-dropping bombshell.”
overnights 10:00 p.m.
Euphoria Recap: That Was Awkward Euphoria is juggling not one but two love triangles simultaneously.
overnights 10:00 p.m.
All Creatures Great and Small Recap: The Daffodil Ball A magnificent cow and a cantankerous pig!
overnights 9:03 p.m.
Power Book II: Ghost Recap: No Loose Ends Arguments and hard lessons galore.
blabbermouths 9:01 p.m.
Is Brian Cox Allowed to Be Saying All This? L-to-the-O-G off, Brian.
feuds 6:43 p.m.
Jonah Hill Ends Longstanding Feud With Baby Yoda Our long national nightmare is over.
family feuds 4:00 p.m.
Oops … Britney and Jamie Lynn Spears Are Fighting Again Britney brought their argument over Jamie Lynn’s memoir into day two.
🐝 buzz buzz 🐝 3:58 p.m.
‘You Can Write Those Kinds of Dynamics Forever’ Showtime’s president of entertainment on setting up the series for success, its multi-season plan, and when to expect the next installment.
overnights 2:19 p.m.
Saturday Night Live Recap: Ariana DeBose Gives the Season a Jolt Ariana DeBose has tremendous chemistry with the cast and gives one of the season’s best performances.
tv 2:03 p.m.
Gentefied Co-Creator Linda Yvette Chávez Reacts to Show’s Cancellation “Metrics and algorithms will never measure the true impact of what we did here.”
snl 1:35 a.m.
Will Forte to Host SNL Next Week With musical guests Måneskin.
totally bugging Yesterday at 6:30 p.m.
Melanie Lynskey’s Yellowjackets Co-stars Defended Her on Set Juliette Lewis wrote a letter to producers on Lynskey’s behalf.
extremely online Yesterday at 5:32 p.m.
YouTubers React to Netflix’s Hype House No one can analyze content creation better than those who make it.
deep dive Yesterday at 12:59 p.m.
Wait, Who Are the Eternals? The 2021 MCU entry is finally streaming on Disney+. Here’s what you need to know before hitting play.
movies Yesterday at 1:38 a.m.
Nicole Kidman Addresses Her AMC Theatres Commercial: ‘It’s So True’ She believes that somehow heartbreak does feel good in a place like this.
my single is dropping Yesterday at 12:26 a.m.
Ye Eases Us Into His New Song ‘Eazy’ Featuring the Game and a dig at Pete Davidson.
overnights Jan. 14, 2022
RuPaul’s Drag Race Recap: Jorgeous Jorgeous Girls Love Drag Another premiere, another talent show, another front-runner.
back on track Jan. 14, 2022
Black Panther: Wakanda Forever Resumes Production With Letitia Wright The actress has recovered from the on-set injury she suffered last year.
More Stories