30 Rock’s Kenneth Parcell is a weirdo, but there’s something more going on there. His encyclopedic knowledge of television history is just uncanny enough to make you wonder if he hasn’t lived it himself. The show hinted all along that Kenneth was immortal, and the final moment of the series finale confirmed it. I went ahead and compiled a list of every reference to Kenneth’s immortality, from his questionable age to the strange details of his personal life. Read up on NBC’s immortal page, but remember, “immortal characters” are on Kenneth’s TV No-No Words list. 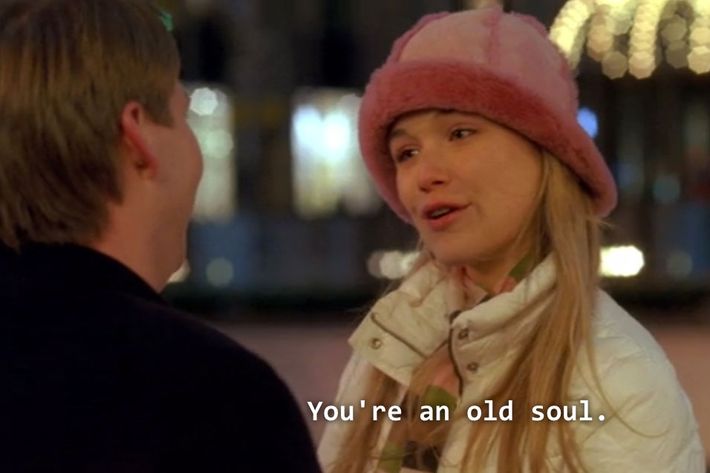 Cerie: That’s why I like you, Kenneth. You’re an old soul.

Kenneth: Thank you. My mamma thinks so too. In fact she’s pretty sure I’m the reincarnated soul of Adrian Twyfer. He was our town minister who died in an organ fire. 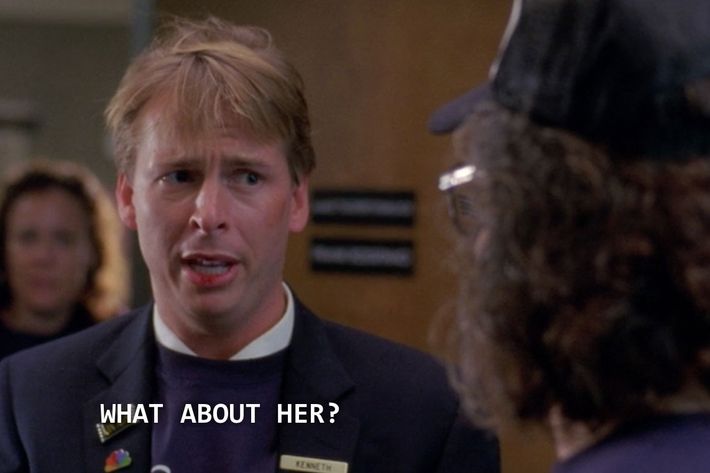 Frank: You know that old lady in accounting who thinks you’re her husband that died in the war?

Kenneth: What about her? 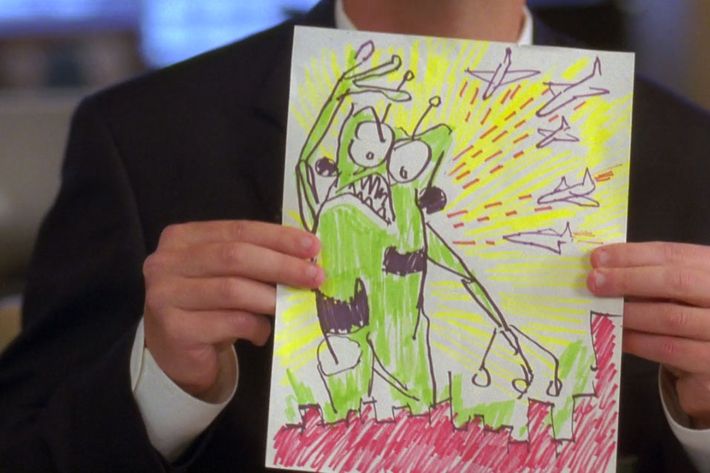 Jack: Kenneth, show him the drawing of the new field.

Kenneth holds up picture of Godzilla attacking a building. 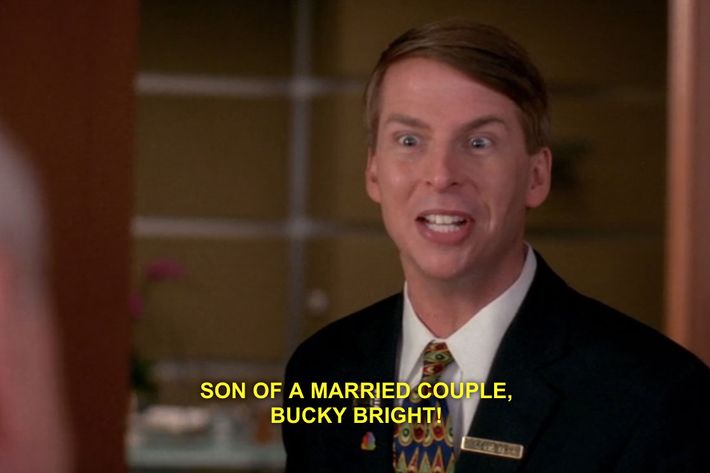 Jack: Jonathan. Who is this?

Kenneth: Mr. Donaghy, this was delivered to — son of a married couple, Bucky Bright!

Jack: You know who this is?

Season 3, Episode 3: “The One with the Cast of Night Court” 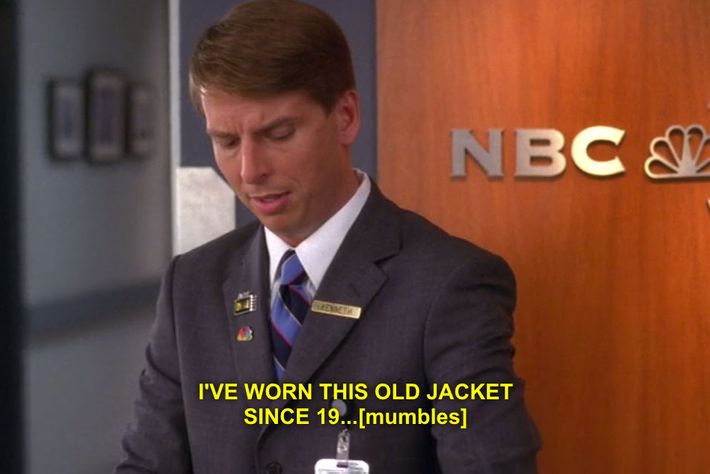 Kenneth: I’m just sad, sir. I’ve been wearing this old jacket since 19… *mumbles* and now they’re just throwing it away. 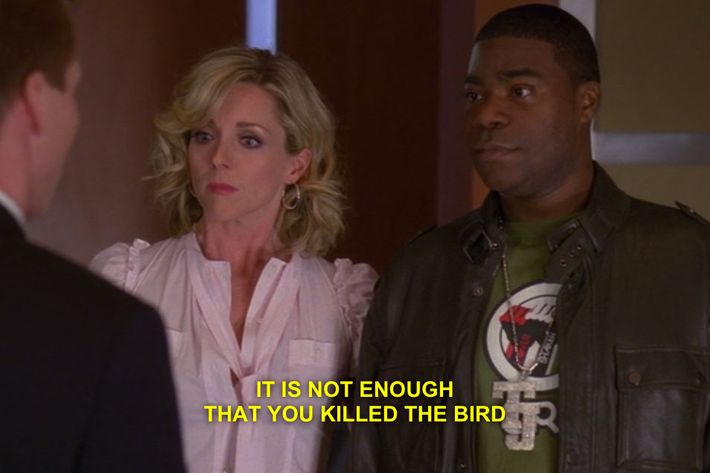 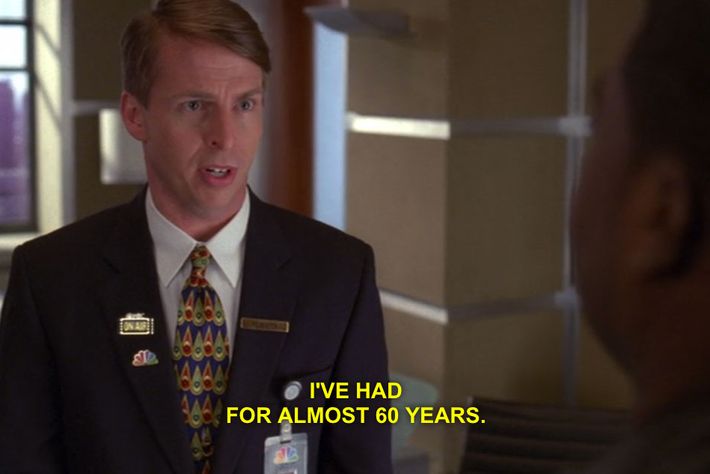 Kenneth: It is not enough that you killed the bird I’ve had for almost 60 years, but the fact that you didn’t trust me is unforgivable. 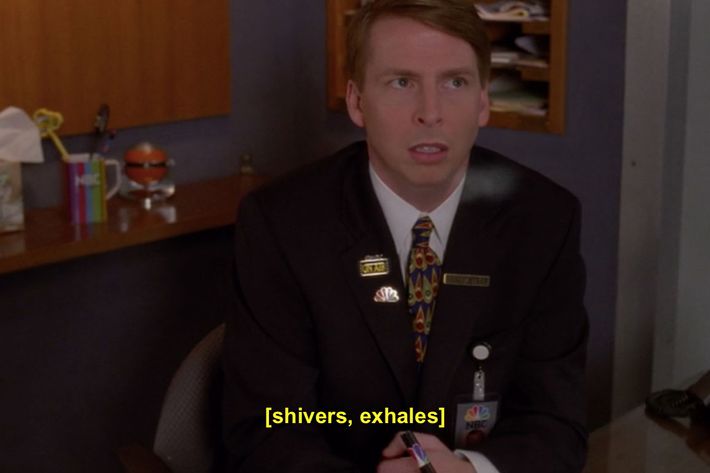 Kenneth: Sure, I was legally dead for five minutes…

Kenneth: Oh, I’m fine. But I think I brought something back with me.

Kenneth shivers and exhales a cloud of smoke. 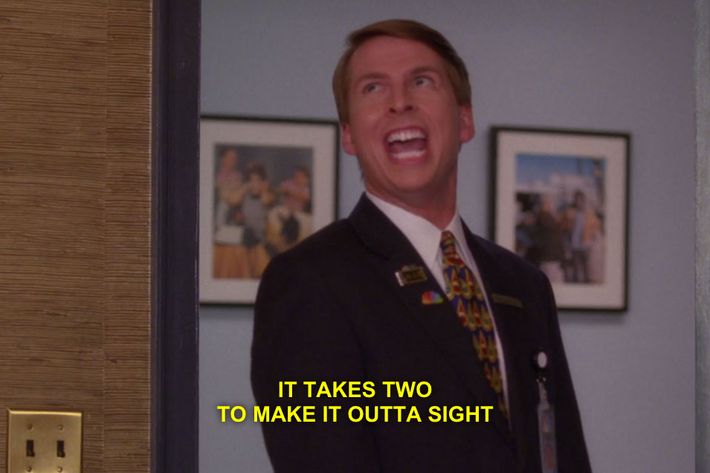 Liz and Pete are trying to figure out how old Tracy is.

Tracy: Of course. Why would I lie about my age? I’m in the entertainment industry.

Pete: Right. Well, you know, Liz and I were just talking about that old Rob Base song “It Takes Two.”

Liz: Yeah, everybody our age knows that song, right? (sings) Ladies love me, girls adore me. I mean, even the ones who never saw me. (Liz and Pete together) Like the way that I rhyme at a show. The reason why, man, I don’t know. So let’s go ‘cause.

Tracy: Not familiar. But what about this song? (sings) Gee it’s great, after being out late, walkin’ my baby back–

Liz: How old are you?

Tracy: Hey, remember this song? (sings) If e’re a fair maiden a knight chanced to see…

Kenneth (sings): Astride his fair steed to spy.

Season 4, Episode 2: “Into the Crevasse” 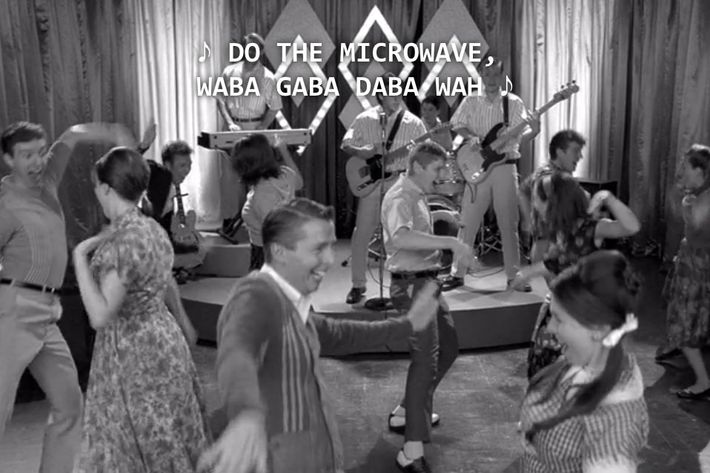 Kenneth is dancing in the “Do the Microwave” flashback from post-World War II. 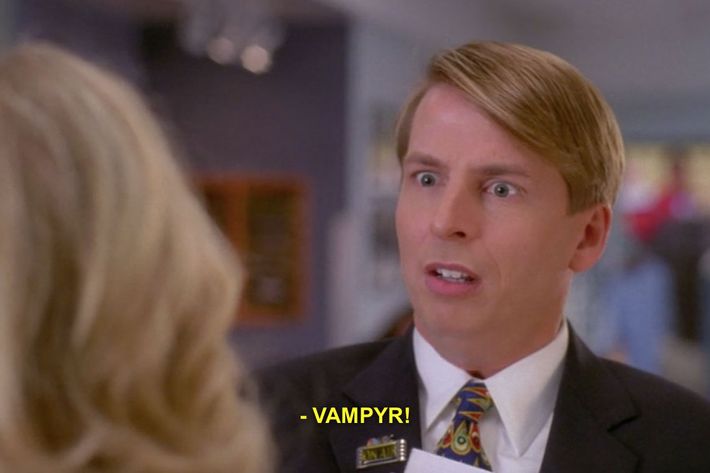 (An old pronunciation of vampire.)

Kenneth (in Latin): You speak Latin? Then you understand. The safety of the people is the highest law. 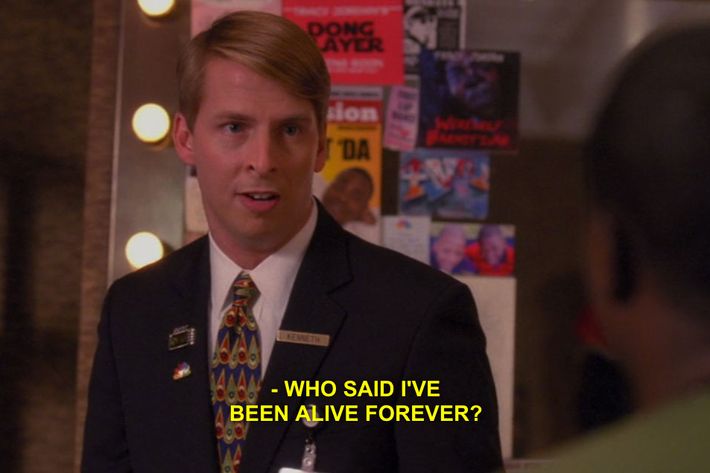 Tracy: Ken, you don’t want to be a page forever.

Tracy: What? No, I mean, what’s your dream job? Where do you see yourself in 10 years?

Kenneth: Well, you know how much I love television, sir. So I guess my dream would be to one day run the network. Just kidding: there won’t be a network. But whatever people are watching, I want to be in charge of it.

Tracy: So… someday, you could be my boss? 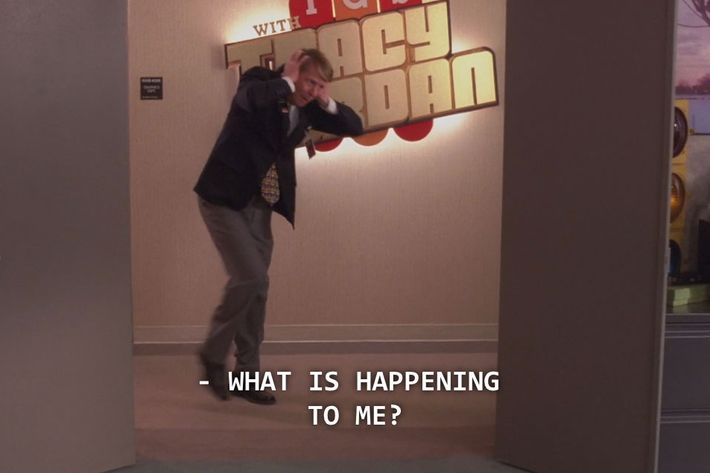 Frank: I also have this low-frequency tone that can only be heard by people over 40.

Jenna (loudly): Have you started playing it yet?

Jack (loudly): Lemon, can I speak to you for a moment?

Kenneth (loudly): What is happening to me? 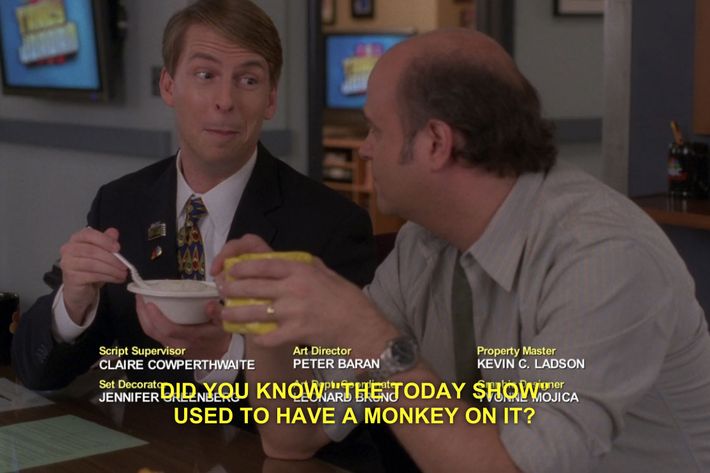 Kenneth: Did you know The Today Show used to have a monkey on it? Hasn’t been good since.

Kenneth refers to J. Fred Muggs, the chimpanzee mascot for The Today Show from 1953-1957. 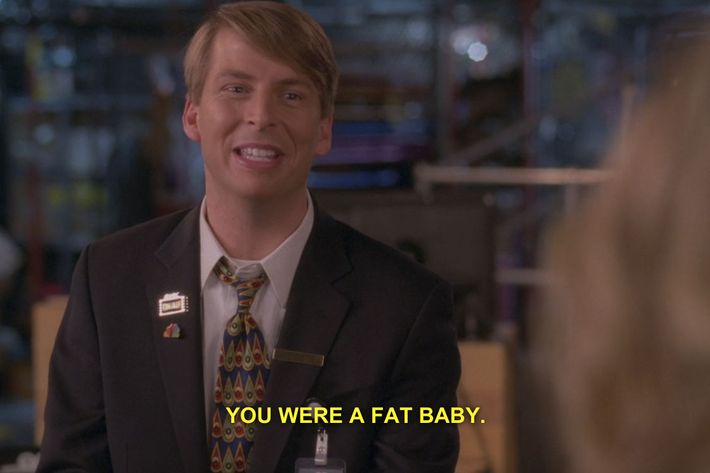 Jenna: These are the building blocks of the craft of acting, something I have dedicated my life to ever since my very first job as baby stuck in well in a commercial for Well Guards. Well Guards: guard your well well.

Kenneth: I remember that commercial. You were a fat baby. 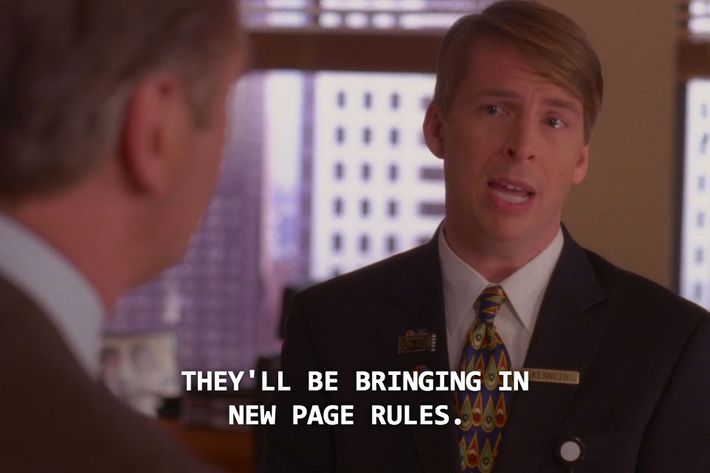 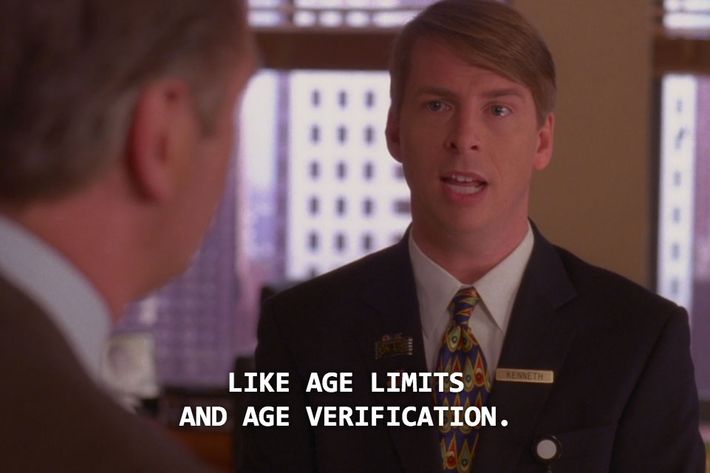 Kenneth (to Jack): A friend of mine has been worried that they’ll be bringing in new page rules like age limits and age verification. 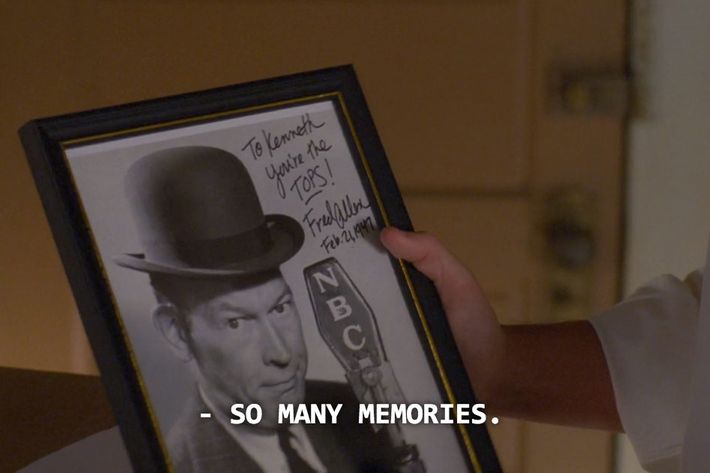 Kenneth: So many memories. 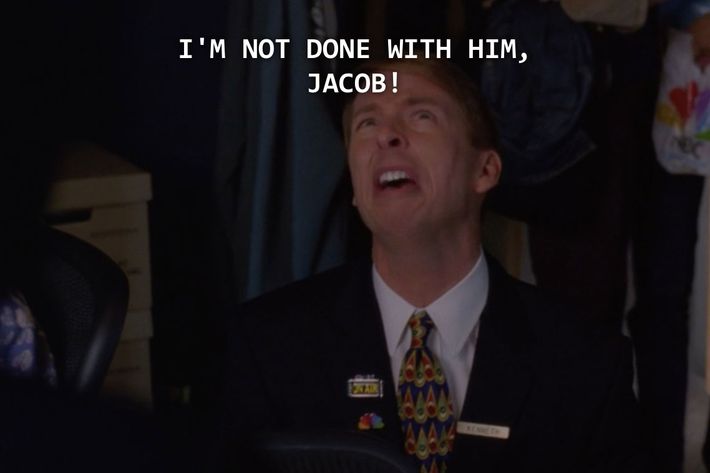 Kenneth (when he thinks Tracy is dead): No, no it can’t be! I’m not done with him, Jacob! He stays on this side! 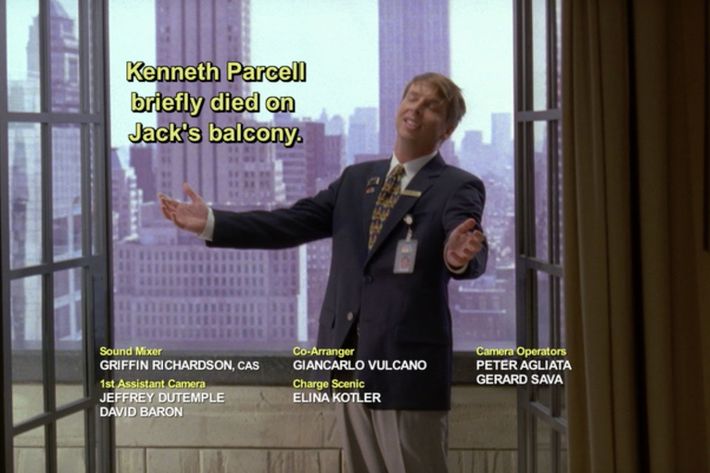 Subtitle: Kenneth Parcell briefly died on Jack’s balcony. He came back with a message form God that he has forgotten. 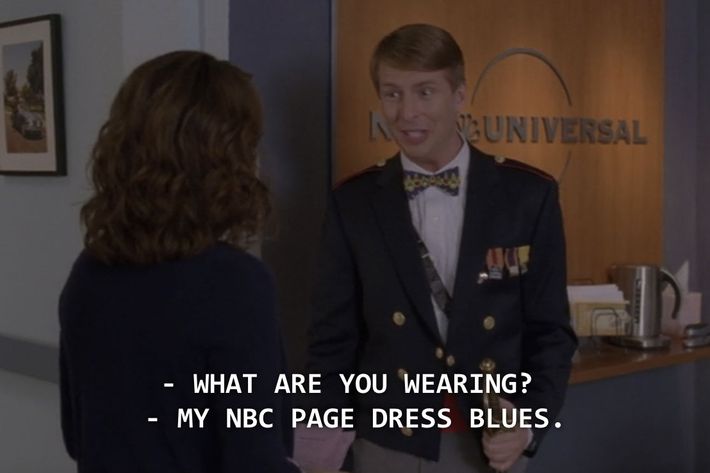 Liz: Kenneth, what are you wearing?

Kenneth is outfitted with a sword that looks like it’s from the 19th century.

Kenneth: I hope I photograph okay, because every time I look into a mirror, there’s just a white haze.

Kenneth: I can talk to animals. Well, not talk to them. I can take commands from them.

Kenneth: So much of television is really not fit for children, or Christians, or the elderly (gestures to himself), so what if there was a black bar on the lower half of your TV screen that kept you from seeing bad things like nudity or soccer.

Kenneth: When I first started working here, an 8-year-old Shirley Temple taught me how to roll a cigarette.

Kenneth: Today does make me wonder where we’ll all be five years from now.

Jack: I’ll just be alone in a house full of memories.

Kenneth: My house is full of white cockroaches (gestures to self).

Kenneth: You see all the good that is in them? How much capacity for love? Yes, I know. I just need more time with them, Jacob. Give me more time, Jacob, I beg of you!

Pete reads Kenneth’s dream chore list and one of the items is “fix that humming noise only I can hear.” This is a reference to the app that Frank used to play a signal only people over 40 can hear in season 4, episode 10.

Suze Orman: How old are you?

Kenneth: Don’t worry about it.

Jack: Now take off that bald cap, Kenneth, we have a lot of work to do.

Kenneth: Of course, take off my bald cap. Not put on my wig.

Liz: Do you have a second, Kenneth?

Kenneth: No, there’s only one of me. What? What are you asking?

Kenneth: My father wore this to his high school prom. The theme was “enchantment under the Jim Crow laws.”

After Tracy gets his sense of smell back.

Tracy: Funny, Kenneth, you don’t have any smell at all.

Kenneth: Don’t worry about it.

Jenna: Kenneth, be honest, am I the worst person you know?

Kenneth: Oh, Ms. Maroney, judging is for God and his angels, so yes, you are.

Kenneth: I listened to rock and roll music once, but I turned it off before I started worshipping the devil. The song went: “Mr. Sandma —” then I shut it off.

Kenneth appears in a flashback to NBC News.

Kenneth (to Hazel): You really don’t have a place to live? But where will you sit patiently in the dark while you wait for the next day to start… I mean, sleep?

Pearline: Oh, he’s always been a special boy. I remember the day he was born. He looked up at me and he said “Mama, I am not a person. My body’s just a flesh vessel for an immortal being whose name if you heard it would make you lose your mind.”

Kenneth: Why are you doing this to me, Jacob?

Liz’s great-granddaughter: Yes, sir. It’s based on stories my great-grandmother told me.

Kenneth: I know, and I love it.

There are flying cars in the background.

Madeline Raynor is a New York City-based writer. She writes for BUST Magazine and has written for Death and Taxes, Mashable, Indiewire, and Time Out New York. She loves all things Tina Fey. Word to the wise: her first name is pronounced with a long “i,” like the red-haired girl from France. Follow her on Twitter @madelineraynor_.

#metoo 22 mins ago
Chris Cuomo Accused of Sexual Harassment by His Former Boss A former executive producer says Cuomo groped her at a party in 2005 — and then apologized to her husband.
true crime podcasts 23 mins ago
This Week in True-Crime Podcasts: Revisiting 19th-Century Vampire Panics Plus, a closer look Houston, Texas, the armored truck robbery capital of the United States.
blast from the past 11:36 a.m.
Russell T. Davies Will Return to Doctor Who After 12 Years The showrunner, credited with reviving the BBC series in 2005, will succeed Chris Chibnall.
romantic simulations 11:18 a.m.
Elon Musk and Grimes Took the Red Pill and Broke Up “We are semi-separated but still love each other.”
respect the classics 10:42 a.m.
Johnny Marr Goes Full Mob Boss, Says He ‘Dealt With’ Rick Astley’s Smiths Covers “I didn’t ask for that.”
protest music 10:33 a.m.
Janelle Monáe Released a 17-Minute ‘Say Her Name (Hell You Talmbout)’ Featuring 16 other musicians and activists.
documentaries 10:25 a.m.
Hulu’s Framing Britney Spears Sequel, Controlling Britney Spears, Is Out Tonight With “new allegations” from inside the conservatorship.
encounter 10:00 a.m.
You Don’t Know Amalia Ulman The enigmatic artist cast herself and her mother in her new movie, El Planeta, set in her hometown. She swears it’s fiction anyway.
By Rachel Handler
my single is dropping 9:45 a.m.
Coldplay, BTS Are an Arena-Pop Supergroup on ‘My Universe’ The 11 musicians joined forces for the song off Coldplay’s upcoming Music of the Spheres.
overnights 8:00 a.m.
The Morning Show Recap: The Dinner Party Alex’s hero’s return is challenged by the little fact that everyone seems to hate her.
the grub street diet 6:00 a.m.
T-Pain’s Favorite Drinks Always Get Too Expensive “Clubs are like, ‘Well, we heard a rapper talk about it so now this is $1,200 more than last week …’”
By Chris Crowley
overnights 6:00 a.m.
Ted Lasso Recap: Never Can Say Good-bye Rebecca and Ted confront their parental baggage in a heartfelt episode that leaves a bunch of threads dangling.
mamma mia! Yesterday at 7:03 p.m.
Non-Italian Non-Plumber Chris Pratt Will Be the Voice of Mario Mamma mia, that’s a spicy cast list!
ridin' solo Yesterday at 6:06 p.m.
Jason Derulo Says He and Jena Frumes ‘Have Decided to Part Ways’ They just welcomed baby Jason Derulo in May.
tv review Yesterday at 5:55 p.m.
Midnight Mass Provokes More Thoughts Than Screams Hamish Linklater’s performance makes this Mike Flanagan’s best Netflix series to date, even if it’s a less frightening experience altogether.
the r. kelly trial Yesterday at 5:50 p.m.
Um, R. Kelly’s Lawyer Just Used Martin Luther King Jr. to Argue for Innocence For some reason, lead Kelly attorney Deveraux Cannick also invoked Mike Pence and Hugh Hefner in arguing that his client is not guilty.
cult followings Yesterday at 5:22 p.m.
HBO Max Throws Another Cult Doc to Its Devoted Followers With The Way Down The Way Down: God, Greed and the Cult of Gwen Shamblin is a mighty big name for a mighty big story.
💖💜💙 Yesterday at 4:33 p.m.
Happy Bi Visibility Day, Here’s Kelly Clarkson Covering ‘Make Me Feel’ It can’t possibly be a coincidence, right?
1.5x speed Yesterday at 4:00 p.m.
Going Deep on a Classic Fugees Album (and 7 More Podcasts Worth Trying) Including a series about gardening.
buffering Yesterday at 3:15 p.m.
Good Deal, Bad Strategy: Why the Paramount+ and Showtime Bundle Is a Mess Should they just be one service by now?
More Stories