At various points in human history, Herman Melville was a middling novelist, Shakespeare was a pretty good romance writer, and the sun was a big bright thing that revolved around the Earth. Which ideas that we take for granted today will be disproven in the years ahead? That’s the premise of Chuck Klosterman’s new book, What If We’re Wrong: Thinking About the Present As If It Were the Past, an attempt to imagine what the textbooks of 100, 300, or even 1,000 years from now will say about American culture at the start of the 21st century. We spoke to Klosterman about the book ahead of an exclusive reveal of its cover, which you can see below.

“We live in a period of extremely high certitude about what we believe, and we’re completely obsessed with the present tense, as if the present will always be this way,” Klosterman says. But any study of human history will tell you that’s never been the case, and the book is Klosterman’s effort to explore what our current standards of thought might be overlooking. He spoke to Richard Linklater about dreams, once considered the most important window into the human psyche. He spoke to Neil deGrasse Tyson and Brian Greene about the possibility of our basic understanding of gravity being overturned one day, as Aristotle’s was. And he looked at the changing reputations of various authors in an attempt to understand what makes literature get “remembered.” As Klosterman put it to us, “Could the most famous American novelist of this period be completely unknown, in the case of Kafka, or known but not respected, like Melville?” (Or even a blogger at a well-regarded pop-culture site? Hmmm.)

Heady topics, all, and that doesn’t even get into Klosterman’s musings on football (“The perception of its problems might end up being the thing that keeps it going”), politics (“What if we are incorrect about the value of democracy and freedom?”), and the future of thought itself (“Just because we’ve always been wrong in the past, does not mean it’s impossible that some day we will not“). He says he’s not trying to predict exactly what might happen in the future, but instead offer a broad reminder that the present is not the finished portrait it might appear to be. Besides, he says, “We can’t be wrong: Everybody who reads this book will be dead by the time it comes true.”

We’re pleased to unveil an exclusive look at the book’s cover. (Yes, it’s supposed to be upside-down.) What If We’re Wrong will be released June 7. 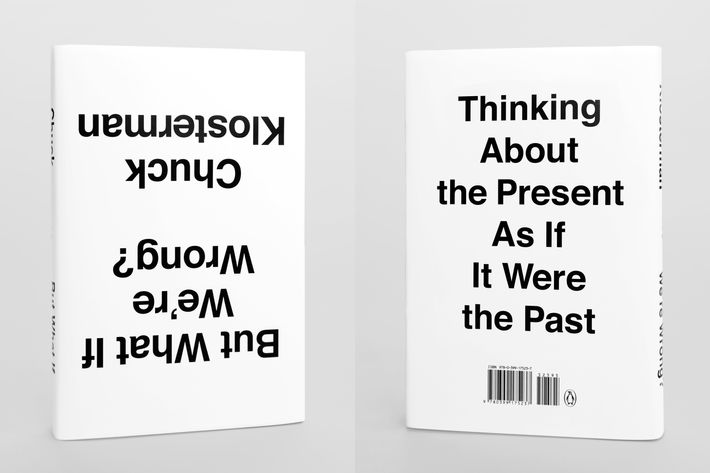