Will Smith as a man whose cognitive functions are far from impaired. Photo: Columbia Pictures

Vulture is speaking to the screenwriters behind 2015’s most acclaimed movies about the scenes they found most difficult to crack. In today’s post, Concussion screenwriter and director Peter Landesman explains the unexpected epiphany about a key courtroom scene, featuring Will Smith’s character Dr. Bennet Omalu, that dawned on him while editing.

Our brains have this habit of quilting dreams from the fabrics of our lives. As a filmmaker, I get to do it for a living. When it came to Concussion, I found myself with so many threads to weave. So integral to the whistle-blower’s tale were spirituality, the cost of hero-worshipping, what it means to be an American, and just how dangerous the truth can be.

How Concussion Skirted the NFL’s Trademarks
Will Smith on Fearing Concussion, Playing Obama

Will Smith’s character, Dr. Bennet Omalu, undergoes a journey that pulls apart the strands. His unraveling as a character leads us to the universal truths buried in the stitches of cultural backlash to his medical discovery, begging the question, “Who is this guy?” A question that, with so much ground to cover, I could only answer in one scene.

Originally, that moment started on page 17 of the screenplay, when Bennet, testifying as an expert witness at a capital-punishment appeal hearing, describes his Nigerian background, lists his various degrees (he has like 14 graduate diplomas), demonstrates a deeper connection with deceased victims in his coroner’s office than living people, and uses his brilliance to prove the defendant’s innocence. 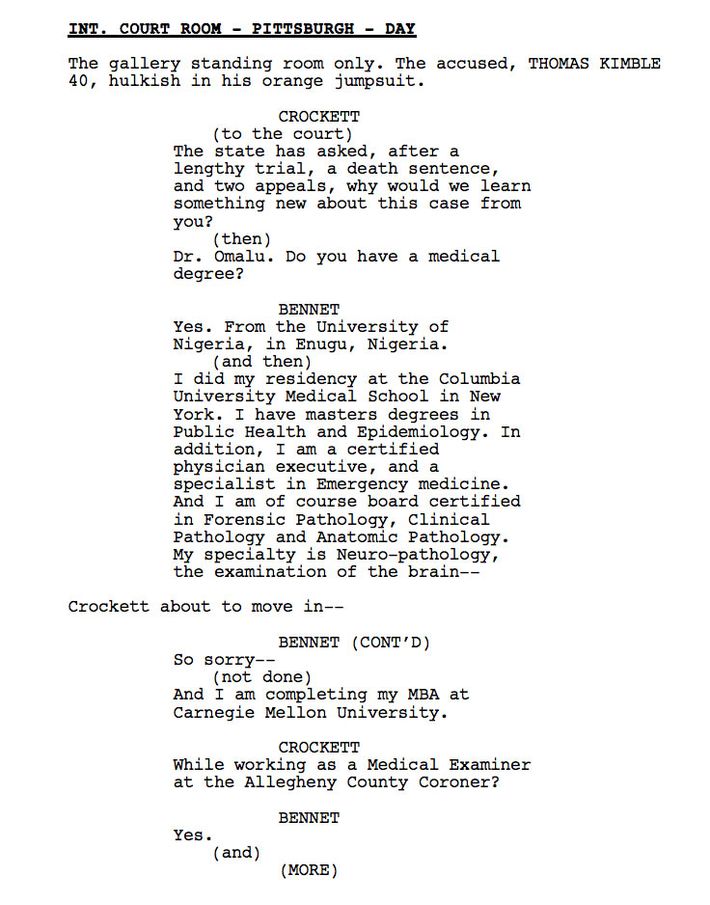 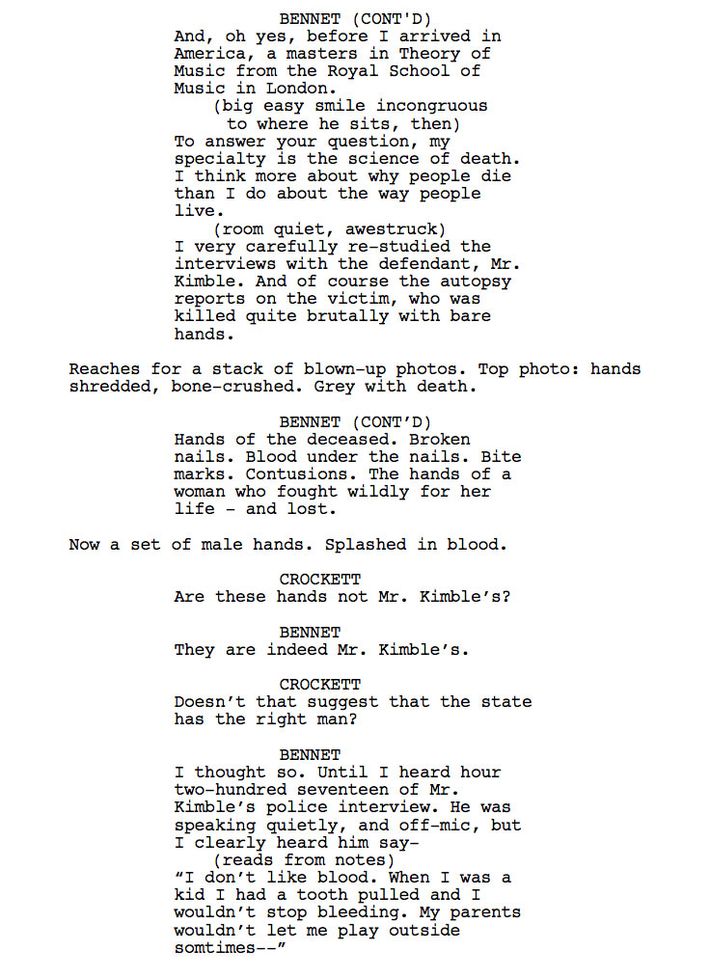 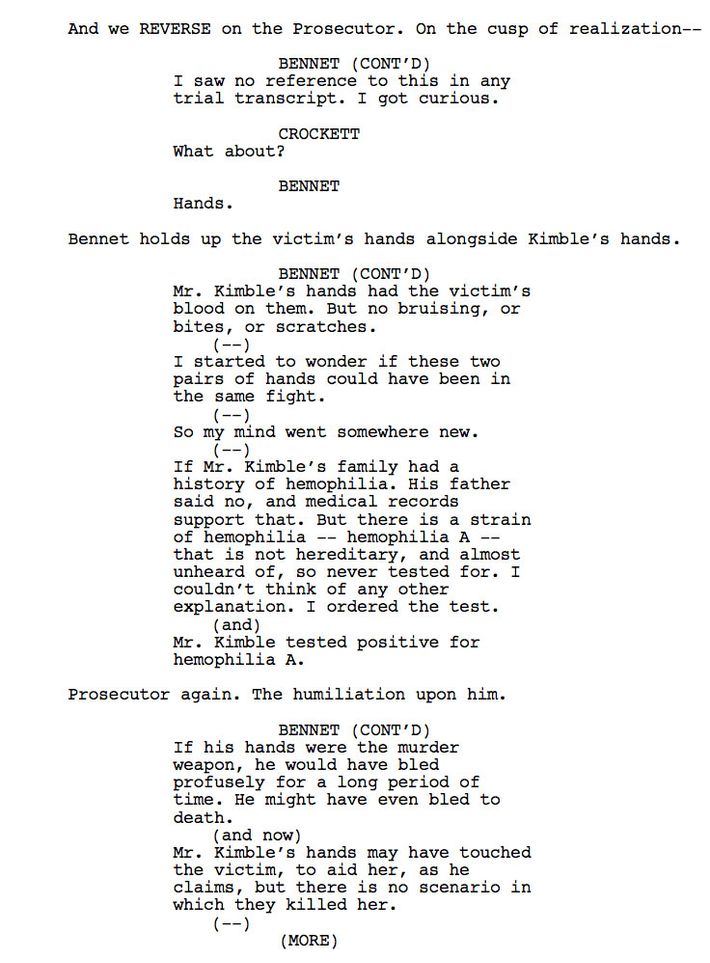 At the time, I thought Bennet’s testimony would introduce the character with just the right words — his own. But “writing” is the wrong way to describe what happens to words in a movie. First you put down words. Then you rehearse them with actors. Then you shoot the words. Then you edit them. You cut a lot of them, you fudge them, you make up new ones in voice-over. Then you cut it and throw it all away.

After I cut that scene together, I knew it was too long, in the wrong place, and focused attention on a death-row case that would never come up again. But then I woke up at 3 a.m. with an idea: a different home for the words. In a different form. In a different part of the movie.

I turned way-long writing that was too clever into a music video: I put an impressionistic version at the very front of the movie instead. And there it lives.

+Comments Leave a Comment
The Toughest Scene I Wrote: Concussion

bbmas 2022 5 mins ago
The Highs, Lows, and Whoas of the 2022 Billboard Music Awards Whoa: A fever dream of an opening.
since when Yesterday at 10:40 p.m.
Machine Gun Kelly Dedicates 2022 BBMA’s Performance to Wife and Unborn Child And on a Blood Moon, no less.
overnights Yesterday at 10:33 p.m.
Barry Recap: Justice Is Still Attainable If Barry does want to genuinely atone for what he’s done, what does that look like?
overnights Yesterday at 9:00 p.m.
The Real Housewives of Atlanta Recap: Let the Games Begin Playing games with the RHOA cast more often than not ends in orchestrated chaos.
overnights Yesterday at 8:57 p.m.
Gaslit Recap: Hot Tub Backroom-Deal Machine It’s pretty clear that Dean does not like himself right now. Nor should he!
another one Yesterday at 8:52 p.m.
Kourtney Kardashian and Travis Barker (Maybe) Got Married (Again) Maybe this time, we’ll be lucky.
timey wimey Yesterday at 7:20 p.m.
Oi Spaceman! David Tennant and Catherine Tate Are Coming Back to Doctor Who Are we bothered?
snl Yesterday at 7:02 p.m.
SNL Thinks Your Long-Term Boyfriend Is Old Enough to Run Errands All on his own!
2022 bbmas Yesterday at 6:52 p.m.
Here Are the Winners of the 2022 Billboard Music Awards A big night for Ye’s Christian/gospel rep.
snl Yesterday at 5:52 p.m.
Steve Martin Explains the History of the Whoopee Cushion on SNL Along with Selena Gomez!
overnights Yesterday at 3:06 p.m.
Saturday Night Live Recap: Selena Gomez Is Looking for Love Selena Gomez makes her SNL hosting debut in an episode that has more misses than hits.
overnights Yesterday at 2:00 p.m.
Conversations With Friends Recap: Kiss and Tell Bobbi is too self-absorbed to realize Frances has a crush of her own.
overnights Yesterday at 12:00 p.m.
Conversations With Friends Series-Premiere Recap: Just Being Polite We’re back to the Sally Rooney Cinematic Universe, this time investigating the inner lives of four friends/lovers.
yikes Yesterday at 9:00 a.m.
A Warning From the Future About The Time Traveler’s Wife A time-traveling TV critic considers Steven Moffat’s strangely chintzy, tonally odd adaptation of the 2003 novel.
theater review May 14, 2022
A Cherry Orchard That Chops Down Most of the Trees Chucking out the familiar in search of the truth.
celebrity May 14, 2022
Britney Spears Reveals She Lost Her ‘Miracle Baby’ “This is a devastating time for any parent.”
go nuts for donuts May 14, 2022
WATCH: Kendrick Lamar Floats on in ‘N95’ Music Video A follow-up to “The Heart Part Five.”
walk off May 14, 2022
Jesse Williams Is ‘Not Really Worrying’ About Leaked Take Me Out Video The Broadway show is upping security after nude footage of Jesse Williams went viral.
a doctor in the house May 14, 2022
Doctor From TV Surprises Girl From the North Country With Special Performances Anthony Edwards made his Broadway debut as Dr. Walker.
rip May 14, 2022
Fred Ward, The Right Stuff and Tremors Actor, Dead at 79 “When it came to battling underground worms, I couldn’t have asked for a better partner,” wrote Kevin Bacon.
More Stories