Vulture is speaking to the screenwriters behind the year’s most acclaimed movies about the scenes they found most difficult to crack. In today’s post, Room’s Oscar-nominated screenwriter, Emma Donoghue — who adapted her own novel of the same name — shares the struggle she faced in cutting an emotional scene while writing the movie.

Jacob Tremblay Gives Adorable Acceptance Speech
Touring the Room From Room, Rebuilt in a Los Angeles Mall
How Lenny Abrahamson Got a Child Actor for Room

There was one plot point I always assumed would be as crucial in the film as it was in the novel: Long after their escape, Ma (Brie Larson) tells Jack (Jacob Tremblay) that she had a baby girl before him, stillborn because she had no medical care during the birth.

In the novel I offset the drama by having it come up in a low-key way, when Jack asks Ma about something he overheard her say to her lawyer. But for the screenplay, I moved the revelation to a more dramatic, visually evocative point: When Ma and Jack return to Old Nick’s (Sean Bridgers) backyard where Room stands, and see the grave from which the police have excavated the baby’s body — which prompts her to finally share the truth with Jack.

Where that exchange would have gone (article continued below): 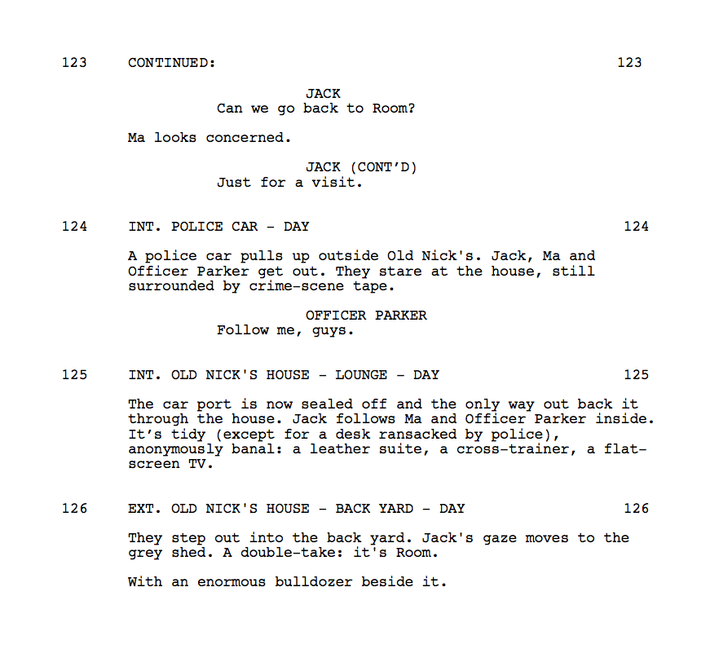 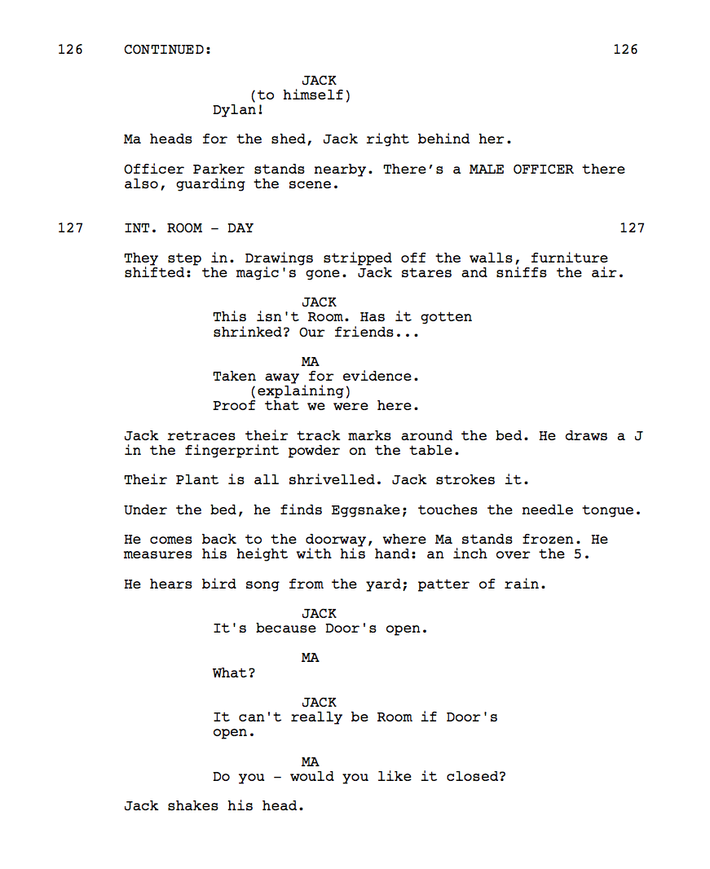 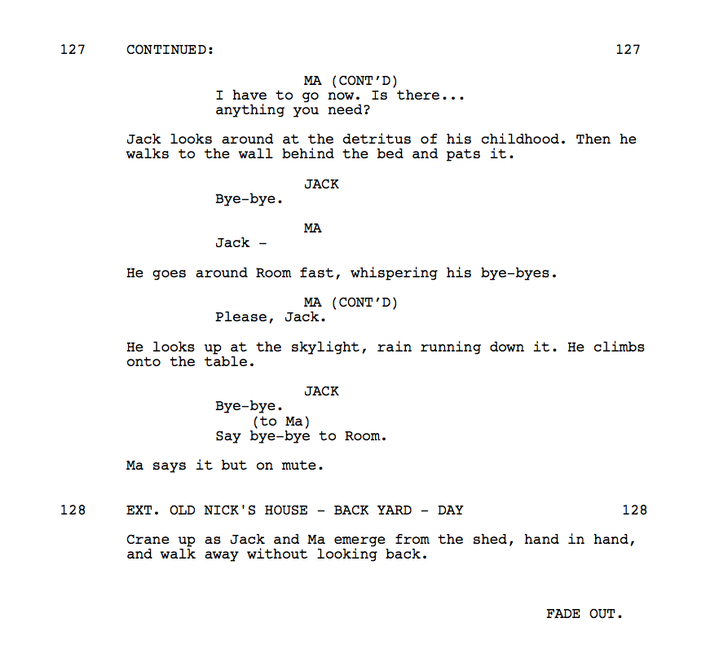 The problem was that when the confession happened at that moment — or anywhere else in the script I tried putting it — the scene became an utter downer. Worse: Whereas a book can meander toward its destination, a film has a forward momentum. The stillbirth story slammed the brakes and yanked us back toward the tragic past. So the scene I sweated over longest ended up cut, and I have to grudgingly admit that the film’s better without it.

+Comments Leave a Comment
The Toughest Scene I Wrote: Room

palme d’or 4:50 p.m.
Triangle of Sadness Takes Home Pepto and Palme d’Or at Cannes Film Festival Director Ruben Östlund’s second Golden Leaf award.
overnights 3:56 p.m.
Stranger Things Midseason-Finale Recap: Escape Plans The midseason finale provides big satisfying answers while also leaving us with several questions to mull over while we wait for Volume 2.
vulture investigates 10:00 a.m.
Where Is Manny Jacinto in Top Gun: Maverick? Does Tom Cruise hate Jake Jortles? An investigation.
movie review 9:00 a.m.
Vengeance Is Mine, a Blast from an Unknown Past, Arrives in Theaters Originally made in 1984, Michael Roemer’s riveting family drama is finally getting a theatrical release.
By Bilge Ebiri
cannes 2022 7:00 a.m.
The Best Movies at Cannes Broke Through the Bleakness The film festival was full of doomed protagonists, graphic murders, and children driven to crime. But a handful of movies were hopeful, too.
that was quick Yesterday at 11:52 p.m.
Matthew Morrison Is No Longer Judging So You Think You Can Dance Because he “did not follow competition production protocols,” whatever that means.
tragedy Yesterday at 9:53 p.m.
Obi-Wan Kenobi Adds Content Warning in Light of Texas School Shooting After Stranger Things recently put a similar message on the first episode of its fourth season.
gilead girl Yesterday at 8:22 p.m.
Alexis Bledel Won’t Appear in Season 5 of Hulu Reality Show Wait, no, The Handmaid’s Tale is supposed to be a dystopian drama.
overnights Yesterday at 7:36 p.m.
RuPaul’s Drag Race All Stars Recap: Fortune Favors the Queen Queens are scheming and plotting.
summer preview Yesterday at 6:56 p.m.
17 Books We Can’t Wait to Read This Summer With new releases from Akwaeke Emezi, Ottessa Moshfegh, Mecca Jamilah Sullivan, Mohsin Hamid, and more.
By
cinephile tea Yesterday at 6:17 p.m.
Viggo Mortensen Accuses Pedro Almodóvar of Being Bitter, Almodóvar Responds What is Cannes Film Festival without someone starting drama for no reason.
survey says Yesterday at 5:31 p.m.
What Do Comedians Think of (the Non-Joke Parts of) Stand-up Specials? Here are insights from 39 of them.
By Hershal Pandya
explainers Yesterday at 5:27 p.m.
The Bullying Allegations at the Center of HYBE’s Next Big K-Pop Group, Explained After Korean forums accused Kim Garam of bullying, the internet was aflame.
overnights Yesterday at 4:12 p.m.
Stranger Things Recap: The Shire Is on Fire We (mostly) love Steve getting his big hero moment in the penultimate episode of Volume 1.
follow friday Yesterday at 4:06 p.m.
Michael Bonfiglio Wants to Tell You a Story We chatted with the director about the art of the stand-up comedy special — and, naturally, hummingbirds.
now streaming Yesterday at 4:00 p.m.
What’s Leaving Netflix: June 2022 Lady Bird, Criminal Minds, My Fair Lady, and more.
overnights Yesterday at 2:47 p.m.
Obi-Wan Kenobi Recap: Second Chances What feels a bit like Taken in space pivots to “John Wick: Chapter 2 in space” territory — and it works!
still learning Yesterday at 1:58 p.m.
Isaiah Rashad Comes Out as ‘Sexually Fluid’ in First Interview About Sex Tape “I’m not in full control of, when I walk into a room, of who I’m attracted to,” he told Joe Budden.
overnights Yesterday at 1:31 p.m.
Stranger Things Recap: This Old House We get a little haunted-house movie in the middle of Stranger Things!
courthouse chaos Yesterday at 1:30 p.m.
Johnny Depp Fans Are Out in Full Force As Trial Nears End When the clock hit 12:50 a.m. Friday, bedlam unfolded outside the Fairfax, Virginia, court parking garage.
More Stories