Vulture is speaking to the screenwriters behind the year’s most acclaimed movies about the scenes they found most difficult to crack. In today’s post, The Danish Girl screenwriter Lucinda Coxon — who adapted David Ebershoff’s source novel of the same name — discusses the challenge of revealing married couple Gerda (Alicia Vikander) and Einar’s (Eddie Redmayne) backstory while also offering hints of Einar’s long-kept secret.

There’s a scene where Gerda Wegener describes first meeting her spouse. She talks about how shy ‘Einar’ was, blushing at her polite approach. And later, after she had invited the young painter for coffee, she had initiated a kiss, and discovered “the strangest thing … It was like kissing myself …” 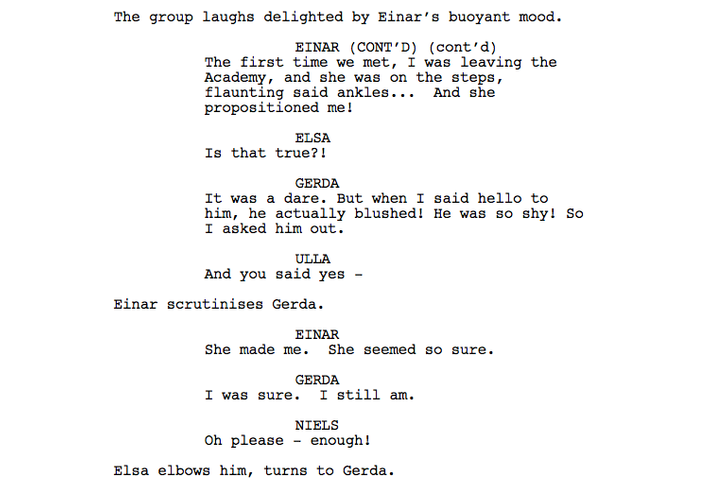 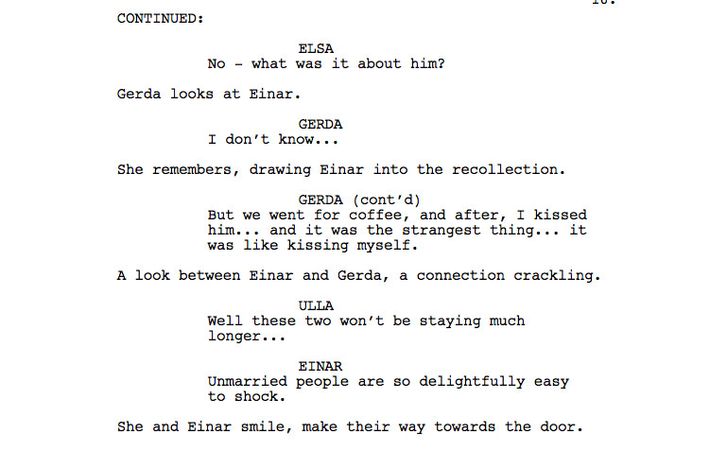 This line went in and out of the script countless times. It’s in David Ebershoff’s novel, so I always wanted to keep it, but I worried that it was too heavy a foreshadowing. I worked hard to keep it, feathering it in. We land on and leave it again very swiftly, so I hope it’s a moment that we — like Gerda — forget, but revisit with different eyes once we understand that Einar Wegener was, in fact, always Lili Elbe.

In the end, it remains in the script because I feel it catches the innocent complacency of young happiness. Also, because there is something fundamentally true about it. Gerda and Lili were indeed as one — conjoined in courage, defiance, and love.

+Comments Leave a Comment
The Toughest Scene I Wrote: The Danish Girl

summer preview 14 mins ago
17 Books We Can’t Wait to Read This Summer With new releases from Akwaeke Emezi, Ottessa Moshfegh, Mecca Jamilah Sullivan, Mohsin Hamid, and more.
By
cinephile tea 6:17 p.m.
Viggo Mortensen Accuses Pedro Almodóvar of Being Bitter, Almodóvar Responds What is Cannes Film Festival without someone starting drama for no reason.
survey says 5:31 p.m.
What Do Comedians Think of (the Non-Joke Parts of) Stand-up Specials? Here are insights from 39 of them.
By Hershal Pandya
explainers 5:27 p.m.
The Bullying Allegations at the Center of HYBE’s Next Big K-Pop Group, Explained After Korean forums accused Kim Garam of bullying, the internet was aflame.
overnights 4:12 p.m.
Stranger Things Recap: The Shire Is on Fire We (mostly) love Steve getting his big hero moment in the penultimate episode of Volume 1.
follow friday 4:06 p.m.
Michael Bonfiglio Wants to Tell You a Story We chatted with the director about the art of the stand-up comedy special — and, naturally, hummingbirds.
now streaming 4:00 p.m.
What’s Leaving Netflix: June 2022 Lady Bird, Criminal Minds, My Fair Lady, and more.
overnights 2:47 p.m.
Obi-Wan Kenobi Recap: Second Chances What feels a bit like Taken in space pivots to “John Wick: Chapter 2 in space” territory — and it works!
still learning 1:58 p.m.
Isaiah Rashad Comes Out as ‘Sexually Fluid’ in First Interview About Sex Tape “I’m not in full control of, when I walk into a room, of who I’m attracted to,” he told Joe Budden.
overnights 1:31 p.m.
Stranger Things Recap: This Old House We get a little haunted-house movie in the middle of Stranger Things!
courthouse chaos 1:30 p.m.
Johnny Depp Fans Are Out in Full Force As Trial Nears End When the clock hit 12:50 a.m. Friday, bedlam unfolded outside the Fairfax, Virginia, court parking garage.
summer preview 1:11 p.m.
What Will Be the Biggest Movie of the Summer? Vulture bets on five films that will break through the hottest months of 2022, in whatever ways they can.
By
summer preview 1:00 p.m.
10 Podcasts We Can’t Wait to Listen to This Summer From a new season of Slow Burn on Roe v. Wade to a “surf-rock audio drama” from a rising star.
in memoriam 12:57 p.m.
10 Essential Ray Liotta Performances From “mesmerizing newcomer” to legendary tough guy, Ray Liotta was magnetic onscreen.
hunter's line reading 12:53 p.m.
This One Ray Liotta Line Plays on a Loop in My Head The late actor’s performances operate on the edge of ravenous and resigned, but he’s almost pious in his line reading as a shark of a divorce lawyer.
By Hunter Harris
overnights 12:38 p.m.
Top Chef Recap: Tucson Time After studying the culture and traditions of Tucson, the chefs are focused and ready to push through the few remaining obstacles.
movie review 12:36 p.m.
The Comfortable Familiarity of The Bob’s Burgers Movie If you accept the narrative’s rigidity and safety, The Bob’s Burgers Movie is a jubilant bit of distraction.
overnights 12:22 p.m.
Grey’s Anatomy Season-Finale Recap: Hail to the Chief Grey’s makes the most of its 400-episode history with a finale that resets the game while paying homage to the past in some moving ways.
chat room 12:05 p.m.
Laura Haddock Was Gently Hazed While Filming Downton Abbey: A New Era Confirmed: A certain Crawley is a “cheeky monkey.”
vulture 10x10 12:00 p.m.
The Mustache Puzzle 1-Across, Four Letters: Song danced to with flailing arms.
More Stories