On last night’s episode of The Bachelor, Ben Higgins, a.k.a. Oatmeal, visited the hometowns of four remaining contestants, where he was eyed warily by each of the girls’ families. But none more so than JoJo’s  overprotective brothers, Matt and Ben Patton, who, as ABC has been hyping up for the past week, ganged up on Ben, accusing him of “brainwashing” the Bachelor women:

For Brother Ben, that may be ‘cause he knows a thing or two about how these things work. In 2013, he starred on NBC’s Eva Longoria–produced dating show Ready for Love, which featured 36 bachelorettes split among three bachelors. The show’s first two episodes aired on NBC, but due to low ratings, the remaining six installments were released on Hulu. JoJo and her family were featured on one episode where Brother Ben brings some of the women home to meet his family. 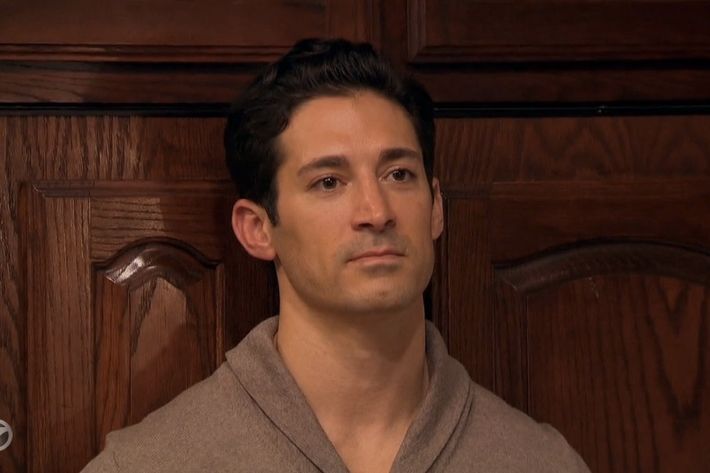 I know you, his eyes say, because I was you.

+Comments Leave a Comment
Bachelor: See JoJo’s Bro on His Own Dating Show

album review 9:00 a.m.
Doja Cat Refuses to Be Dragged Down to Earth Planet Her makes a case for Doja as our new ice-cool pop-queen supreme.
By Craig Jenkins
vulture picks 8:30 a.m.
25 Notable New Releases Over the Next Two Weeks Zola, Lana del Rey’s latest album, Central Park season two, and more.
the streaming wars 8:00 a.m.
The Hottest Streamer (Right Now) Who is winning the platform wars?
By Josef Adalian
first person 7:00 a.m.
Rachel Lindsay Has No Roses Left to Burn I thought I could change The Bachelor franchise from within. Until I realized I was their token.
By Rachel Lindsay
babies all the way down Yesterday at 11:10 p.m.
Nick Cannon One-ups Your Father’s Day With Fourth Baby in Less Than a Year Model Alyssa Scott posted a maternity photo of the pair to her Instagram Stories.
class of 2021 Yesterday at 9:22 p.m.
Age 1,000 Years Instantly As Olivia Rodrigo Celebrates High-School Graduation At least college life is way less emotionally fraught, right?
feeling good Yesterday at 8:01 p.m.
Nina Simone’s Granddaughter Defends Chloe Bailey’s Slinky ‘Feeling Good’ The singer performed as a part of ABC’s Together We Triumph Juneteenth special.
overnights Yesterday at 8:00 p.m.
Evil Season-Premiere Recap: The New Parishioner Two different possessions of dubious credibility shake up our core dynamics in a characteristically off-the-wall premiere.
overnights Yesterday at 8:00 p.m.
Kevin Can F**k Himself Recap: Mutually Assured Destruction With things out in the open between them, Allison and Patty can begin to move very slightly toward something like friendship.
media Yesterday at 7:00 p.m.
Inside the Petty, Vindictive, Career-Ruining Infighting at NY1 Onscreen, NY1 seems like a happy family, but a lawsuit exposed the tumult behind the scenes.
By Caitlin Moscatello
dads Yesterday at 4:06 p.m.
Sitcom Dad Jamie Foxx to Stop Dad Stop Embarrassing Me! Happy Father’s Day?
casting Yesterday at 1:15 p.m.
Nicholas Braun Won’t Be a Catboy in the Cat Person Movie Instead of anime Cousin Greg with ears and a tail, we’ll have insecure Cousin Greg dating a college student and being weird about it.
extremely online Yesterday at 1:50 a.m.
Megan Thee Stallion Calls Out DaBaby for Tory Lanez Retweet “These industry men are very strange.”
candyman June 19, 2021
Candyman’s Nia DaCosta Talks ‘Duality of the Black Experience’ on Juneteenth “Horror is a really effective tool when it comes to telling stories about things that impact us on a social level.”
two nights ago on late night June 19, 2021
Nathan Lane Is Ready to Be Bruce Springsteen’s Understudy “I’m just one bad seafood dinner away from becoming the Boss!”
streamliner June 19, 2021
10 Hacks to Get the Most Out of Roku How to make your smart TV a little more navigable.
respect June 19, 2021
Jennifer Hudson’s New Song Will Sound So Good Over the Aretha Biopic Credits Here is “Here I Am (Singing My Way Home),” co-written by Carole King.
trailer mix June 19, 2021
SpongeBob’s Patrick Star Is the Host With the Most on The Patrick Star Show Step aside, Jimmy Fallon.
dad things June 19, 2021
Clark Kent’s Most Super-Dad Moments on Superman & Lois Yes, he’s holding up bridges and stopping nuclear reactors from melting down, but he’s also going to football practices and packing school lunches.
overnights June 19, 2021
RuPaul’s Drag Race Down Under Season-Finale Recap: You’re a Winner, Baby This grand finale feels a little like a vision of what this sometimes-bumpy season could have been.
More Stories