The methods of communiqué on Downton Abbey slowly expanded over the period drama’s six seasons — throughout its run we’ve seen quintessentially aristocratic bells for summoning servants, telegrams, telephones, and even Robert-disapproved wireless radios. But what about the cardinal method: good ol’ fashioned notes? (Preferably presented on a silver platter by a tuxedo-ed Carson.) Downton’s upstairs and downstairs populace have equally faced the good, the bad, and the ugly via written messages, and to commemorate this, we’ve compiled the greatest and most significant moments of bad news for your perusal. Read ’em and weep.

The writer: George Murray
The recipient: Lord Grantham
The message: This is technically a telegram, but we’d be remiss not to include it. Within the first ten minutes of the premiere, arguably the most pivotal moment of the entire series occurs — Patrick Crawley, the heir presumptive of the estate and Mary’s fiancé, has died on the Titanic along with his father.

The writer: Edith
The recipient: The Turkish Embassy in London
The message: Edith spills what actually happened on that fateful night between Mary and Mr. Pamuk.

The writer: The war office
The recipient: Mrs. Patmore
The message: After some initial confusion, it’s later revealed that Mrs. Patmore’s nephew was shot and killed for cowardice while serving in World War I.

The writer: O’Brien
The recipient: Vera Bates
The message: O’Brien outlines where Vera’s estranged husband, Bates, is located and reveals that he has a new romantic relationship with Anna. The aftermath: Vera makes Bates’s life a living hell. 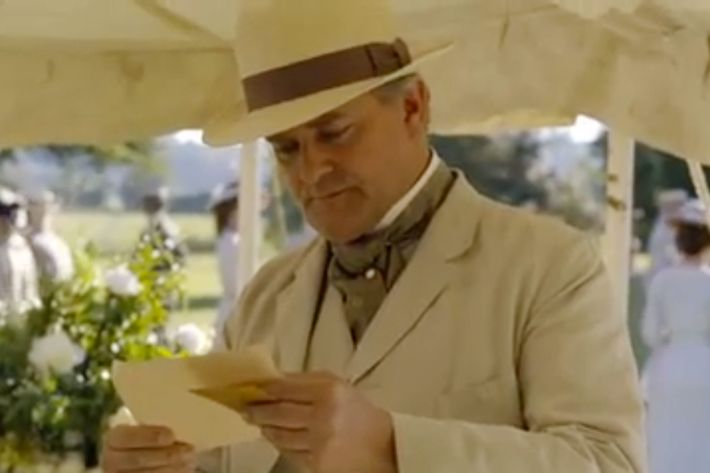 The writer: Unknown
The recipient: Lord Grantham
The message: England is officially at war with Germany. They all find out during a garden party, no less.

The writer: Mrs. Drake
The recipient: Edith
The message: Edith is told she’s no longer needed at the Drake’s farm (after Mrs. Drake sees Edith kissing Mr. Drake), as they’ve hired a farmhand. 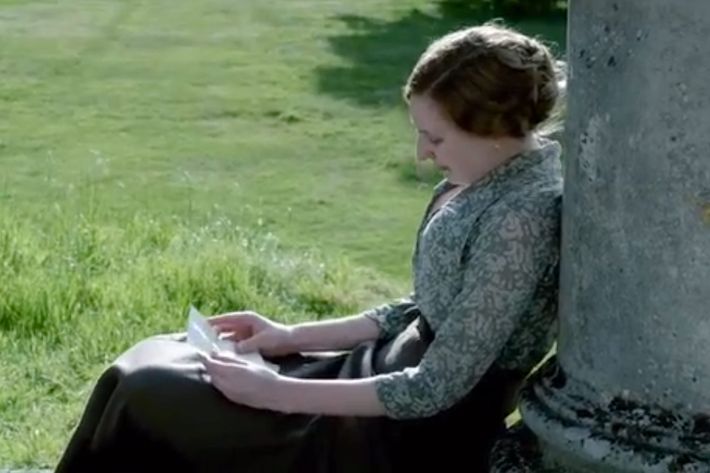 The writer: Patrick Gordon
The recipient: Edith
The message: This one was short: “It was too difficult. I’m sorry. P. Gordon.” It’s purposely ambiguous about Patrick’s true identity (is he really Patrick Crawley, original heir to the estate?) after his and Edith’s relationship blossoms.

The writer: The now-deceased Lavinia Swire’s also-deceased father, Reginald
The recipient: Matthew
The message: This should seemingly be a happy occasion — he was aware Matthew loved Mary and not his daughter all along, and is still cool leaving Matthew his money  — but Matthew’s indecisiveness about accepting it went on for way too long, and this was too easy of a fix to save the Crawleys from Lord Grantham’s dumb Canadian railway investment.

The writer: The now-deceased Matthew
The recipient: Mary
The message: Secretly written before his untimely automobile death, Matthew appoints Mary as sole heir to the estate. Great news for Mary, very bad news for Lord Grantham.

The writers: Anna and Bates
The recipients: Bates and Anna
The message: When Bates gets on his prison guards’ bad sides, letters between the two lovers go undelivered for a long amount of time. Lots of tension and confusion between him and Anna ensue before he wins back the guards’ favor — and the letters conveniently start pouring in again.

The writer: Charles Grigg
The recipient: Carson
The message: Grigg, Carson’s former co-stage performer and good friend (remember The Cheerful Charlies?), falls on hard times and now lives in a decrepit workhouse. He hopes Carson can help him out of his dire situation, but Carson isn’t eager to assist, especially since Grigg blackmailed him many years beforehand.

The writer: Harold Levinson
The recipient: Lord Grantham
The message: Cora’s brother is in serious debt and facing legal troubles. He’s even involved in the Teapot Dome scandal. Lord Grantham has to visit him in America to sort everything out.

The writer: Larry Grey
The recipient:  Isobel
The message: He’s never going to approve of a marriage between her and his father, Lord Merton.

The writer: Anonymous
The recipient: Sergeant Willis and Mr. Vyne from Scotland Yard
The message: Miss Baxter might have some new information about the death of Mr. Green, which prompts the dynamic duo to interrogate her and threaten to put her back in prison if she’s not helpful.

The writer: Bates
The recipient: Everyone
The message: That he did indeed attempt to kill Mr. Green, despite its being untrue. (He wants to protect Anna.) Bates then flees to Ireland.

The writer: Peter Coyle
The recipient: Baxter
The message: Coyle, the man who made Baxter steal from her previous employer, requests that she visit him in jail. After a bit of contemplation, she refuses.

The writer: Dr. Clarkson
The recipient: Violet
The message: Denker was inappropriate in a confrontation in the local village regarding Dr. Clarkson’s opposing stance on the local hospital. Violet proceeds to fire Denker, but she successfully blackmails Spratt into saving her job. 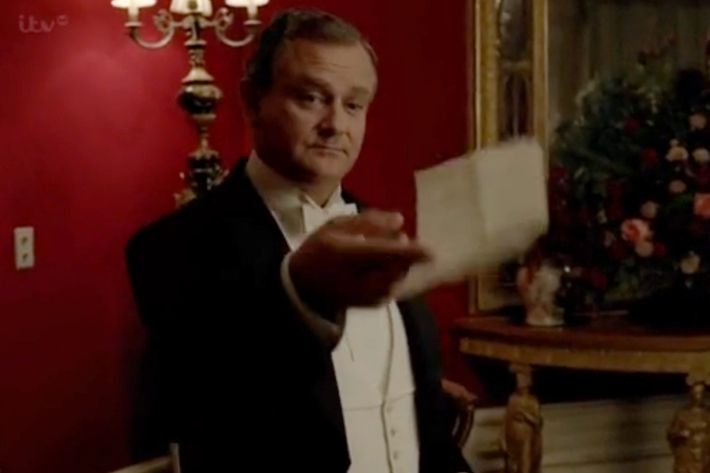 The writer: Bates
The recipient: The porter at Mr. Sampson’s flat
The message: Bates expertly forges a letter to get Mary, Rose, and Charles Blake into Mr. Sampson’s flat to search for another letter that was stolen for blackmailing purposes — a presumably sexy one from the Prince of Wales to his mistress Freda Dudley Ward. They don’t find it, but Bates manages to swipe it from Sampson’s jacket later in the evening, which brought this triumphantly smug look to Lord Grantham’s face.

+Comments Leave a Comment
Downton: A History of Getting Bad News in Notes

on comedy 4 mins ago
Netflix Fires Alleged Leaker As Dave Chappelle News Cycle Continues “The only person who gets fired is the Black person who was quiet the entire time,” the employee responded.
haunted pixels 14 mins ago
When Video Games Feel Haunted: Inside the Low-Res Horror Boom Indie designers are conjuring meta-scares with fuzzy pixelated graphics.
injuries 16 mins ago
America’s Got Talent: Extreme Stuntman Suffers Near-Death Accident on Set Jonathan Goodwin was airlifted to a trauma unit after a rehearsal went dangerously wrong.
overnights 3:20 p.m.
I Know What You Did Last Summer Series-Premiere Recap The teen-thriller classic gets an update with a new twist that makes it equal parts spooky and serious.
overnights 2:47 p.m.
You Recap: Coming Out of My Cage Sure, Joe and Love kill people, but they don’t want to be “the kind of people who kill people.” You know?
book review 2:08 p.m.
Fear and Loathing in ‘Asian America’ In The Loneliest Americans, Jay Caspian Kang tries but fails to restore meaning to an empty term.
overnights 2:00 p.m.
You Recap: Search Party Can we make it through even twenty minutes of this show without a parenting cliche?
vulture lists 2:00 p.m.
Every Ridley Scott Movie, Ranked Sizing up the director’s decades-long career.
accio 2:00 p.m.
Is Harry Potter on HBO Max or Peacock Right Now? Wingardium leviosa!
oscar futures 1:56 p.m.
Oscar Futures: Who’s in Front As the Race Kicks Off? Kenneth Branagh’s Belfast was the belle of Toronto, with King Richard and The Power of the Dog also drawing raves.
By Nate Jones
announcements 1:50 p.m.
We’re Really Doing It: Here’s Your First Look at Vulture Festival’s Lineup Insecure, Henry Winkler, Niecy Nash, The Great, Mira Sorvino, and, of course, Meredith and Brooks Marks are all joining us in person.
song review 1:46 p.m.
There Is Still Nothing Like New Adele Even if “Easy On Me” resembles, on its surface, something old and familiar.
By Craig Jenkins
vulture lists 1:32 p.m.
5 TV Comedies You Can Safely Recommend to Your Parents They’ll tell you how nice these shows are at your next FaceTime.
scary 1:23 p.m.
Adele’s ‘Easy On Me’ Is a Song About Her Poltergeist Many people, including Adele, are saying that her new song, “Easy On Me,” is about her divorce. Unfortunately, it is about a vengeful demon.
between friends 1:03 p.m.
All the Things That Went Unsaid During the Making of Bergman Island Mia Hansen-Løve and Vicky Krieps on motherhood, the bad-dad allure of Ingmar Bergman, and their unspoken connection.
vulture sports 1:01 p.m.
You’ll Love How Much the Red Sox Love ‘Dancing on My Own’ “Deep down, everybody thinks it’s a little catchy.”
movie review 1:00 p.m.
Halloween Kills Is Afraid of Itself It wants to be a gonzo send-up and a social-message movie at the same time. It winds up being neither.
my mixtape is dropping 12:39 p.m.
Add PinkPantheress’s Debut Mixtape to Your MySpace Profile Or just stream To Hell With It now.
my single is dropping 12:09 p.m.
Miranda Lambert Grows Up to Be a Cowboy in New Single “If I Was a Cowboy” is the latest in her busy 2021.
overnights 12:00 p.m.
You Recap: Can You Dig It? A lot is riding on Joe and Love’s couples therapy.
More Stories