Kurt Sutter, the man who created the lugubrious Bastard Executioner and then canceled the show, via full-page ads in Variety and The Hollywood Reporter, because “Nobody’s fucking watching,” has blood lust. Dude loves his entertainment bloody and brutal — even his boxing movie, Southpaw, is a debbie downer. Now the Sons of Anarchy writer/director/actor is creating a comic book for BOOM! Studios, Variety reports.

Lucas Stands concerns, in Sutter’s words, “a former military special-ops guy who has done, in the service of his country, some really heinous and violent things, and when he comes back, the integration into society becomes increasingly more difficult for him … he reaches a very low point in his life, and it’s at that point where he intends to take his own life and he’s approached by an entity that makes him a deal.” He becomes a “hitman from hell” who slays demons to clean his slate. So … he’s basically another violent anti-hero trying to redeem himself, which is exciting. The six-issue series, which Sutter is writing with Caitlin Kittredge (Coffin Hill), with art by Jesús Hervás (Clive Barker’s Hellraiser), will launch on June 6, in tangible and digital formats. You can see Lucas Stand, who looks a lot like John Constantine with his gun and whiskey and tan jacket and loose-dangling tie and all that ominous fire enveloping him, below. 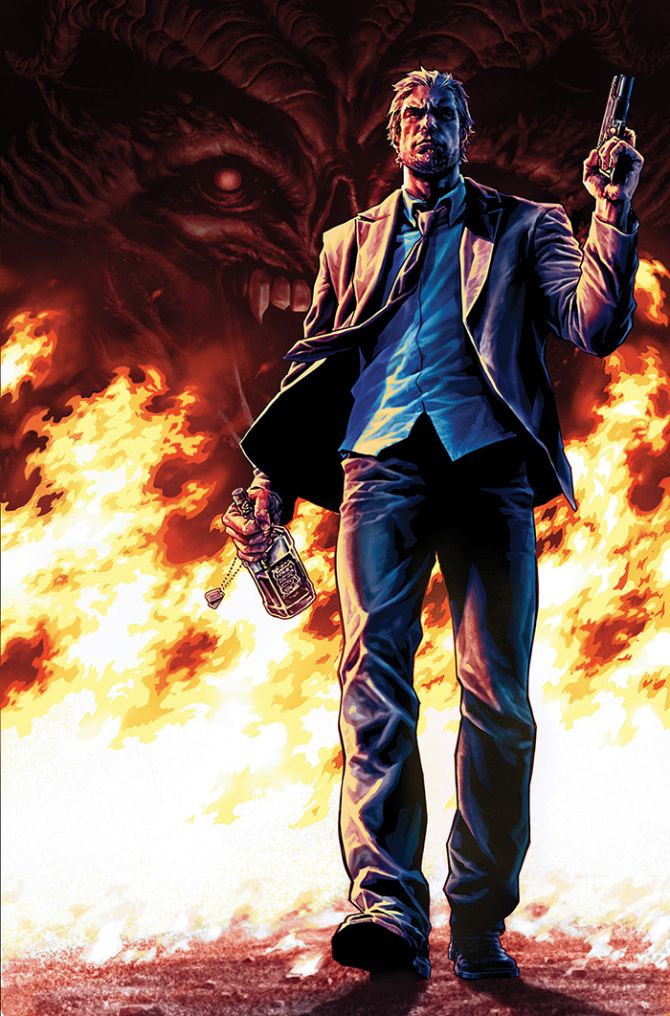 the industry 19 mins ago
What Will Happen to Movie Guns in Post-Rust Hollywood? Calls for bans on functional firearms have been made, but entertainment-industry consensus regarding the abolition of guns on set remains elusive.
By Chris Lee
tributes 3:06 p.m.
Steven Spielberg Pays Tribute to Stephen Sondheim at West Side Story Premiere “Thank you Steve, for the hat.”
superlatives 3:03 p.m.
The Most Endearing and Psychedelic of the Bangles, According to Susanna Hoffs “I’m grateful that we were born out of that time period, but it was bound to be fraught.”
By Devon Ivie
chat room 2:54 p.m.
Renée Rapp Got the Full College Experience Through Her Character The Sex Lives of College Girls star on roommate dynamics and figuring out her identity alongside Leighton.
overnights 2:23 p.m.
Power Book II: Ghost Recap: In the Power Universe, It’s Every Man for Himself There’s no such thing as a selfless act in the Power universe.
ex-besties 2:19 p.m.
Adam McKay Says Will Ferrell Won’t Speak to Him They haven’t spoken since they broke up Gary Sanchez.
ink 2:06 p.m.
Billie Eilish Is No Longer Keeping Her Tattoos Secret She opened up about all three of them in her 2021 Vanity Fair video interview.
podcasts 2:00 p.m.
This Podcast Asks: Is the Kevin Costner–Cal Ripken Jr. Urban Legend True? The Rumor investigates one of baseball’s most salacious conspiracies.
funny videos of the month 1:30 p.m.
The Best Comedy Shorts of November 2021 Rounding up our favorite funny videos of the month.
By Luke Kelly-Clyne and Graham Techler
the long and winding show 1:11 p.m.
The Beatles: Get Back Is Too Long, But It Has to Be What may at first seem like a major bug in Peter Jackson’s new docuseries is actually its greatest feature — and a gift.
a long shot 1:00 p.m.
‘You Just Have to Accept That Wes Is Right’ The French Dispatch crew explains how it pulled off the movie’s quietly impossible long shot.
By Matt Zoller Seitz
now streaming 1:00 p.m.
New on Hulu: December 2021 Pen15, The Nowhere Inn, the Ocean’s trilogy, and more.
only girl (in the republic) 12:30 p.m.
Barbados No Longer Has a Queen, But It Does Have a Rihanna That’s the Right Excellent Robyn Rihanna Fenty, National Hero of Barbados to you.
reality tv 12:17 p.m.
Netflix’s Selling Tampa Trailer: ‘Closing Deals in Heels’ Along the Suncoast “They got some problems. Watch.”
adele's palace 11:32 a.m.
Hold on, Adele Is Doing a Las Vegas Residency “Weekends With Adele” runs January through April at Caesars Palace.
essential episodes 11:07 a.m.
17 Essential Episodes of It’s Always Sunny in Philadelphia Featuring rum ham, Chardee MacDennis, and, of course, the Nightman.
awards season 10:58 a.m.
Squid Game Wins Its First Major Award at the Gothams And The Lost Daughter did anything but lose.
a long talk 10:21 a.m.
Squid Game Creator Hwang Dong-hyuk Answers All Our Lingering Questions On “Gganbu,” Ali, and how he lost six teeth during production.
rip 9:59 a.m.
Mandy Patinkin, Barbra Streisand, and More Pay Tribute to Stephen Sondheim “I got to be in the room with Shakespeare. Who gets that? How come I got to have that even for a minute? And it was a lot more than a minute.”
now streaming 9:00 a.m.
New on Netflix: December 2021 Don’t Look Up, Cobra Kai, The Lost Daughter, and more.
More Stories