The lineup has been announced for Panorama, which will rival Governors Ball as New York City’s major summer music fest. The headliners are Arcade Fire, Kendrick Lamar, and LCD Soundsystem. Other acts include Sufjan Stevens, Sia, Alabama Shakes, and A$AP Rocky. Panorama comes to us from Goldenvoice, the company behind Coachella. Finally, New Yorkers can sit back, relax, and let Coachella come to them. Will Panorama be the Coachella of the East Coast? Only time will tell. The company’s experience should give them a leg up on GovBall organization-wise (New York will not be quick to forget 2013’s Mudpocalypse and its aftermath). The festival will take place on Randall’s Island (the same location as GovBall) from July 22–24. 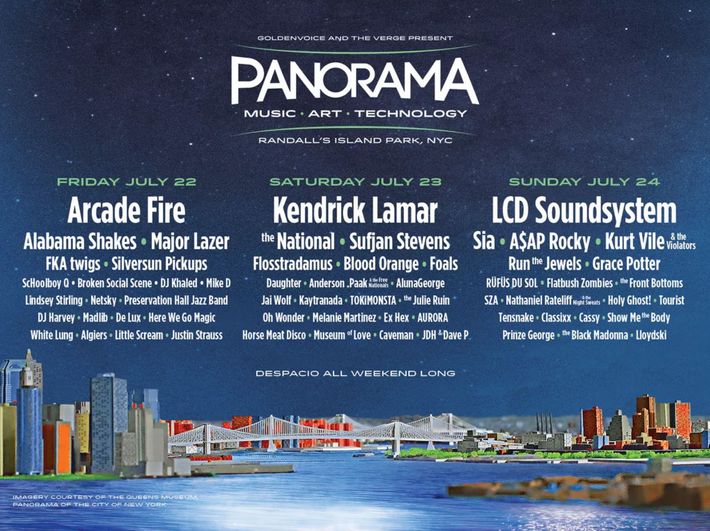 last night on late night 2:10 a.m.
Jimmy Kimmel Reflects on Virtual Emmys: ‘We Set a Record. Let’s Just Say That.’ The record was for lowest ratings ever, but still.
halftime anytime 12:47 a.m.
The Killers Welcome Raiders to Vegas With Rooftop ‘Mr. Brightside’ What is this, 2003? You wish. You wish it was 2003.
overnights Yesterday at 10:55 p.m.
We Are Who We Are Recap: When I’m With You, I Feel So Unreal We circle back to last week’s episode, this time alongside Caitlin, who is clearly ready for a change both within and outside herself.
reruns Yesterday at 10:38 p.m.
Comedy Central Will Also Air Schitt’s Creek, So Now You Truly Have No Excuse Five episodes every Friday, which is almost as many as you would have binge-watched on your own.
overnights Yesterday at 10:30 p.m.
Below Deck: Mediterranean Recap: Good Golly, This Galley! Malia’s in a tough spot as both Tom’s girlfriend and Captain Sandy’s most devout follower.
overnights Yesterday at 10:30 p.m.
Canada’s Drag Race Season Finale Recap: What’s Her Name? Love Priyanka’s branding paying off from the get-go!
overnights Yesterday at 10:01 p.m.
The Third Day Recap: Have a Nice Trip Most people would think twice before dropping acid on a day they also flirted with death and madness, but Sam is not most people.
the zoom where it happens Yesterday at 9:02 p.m.
The One Where Gabrielle Union Hosts an All-Black Table Read of Friends With Sterling K. Brown and Ryan Bathe taking on the roles of Ross and Rachel.
cancellations Yesterday at 7:28 p.m.
Netflix Brings The Dark Crystal: Age of Resistance to An End After One Season This has Skeksis written all over it.
the law Yesterday at 5:28 p.m.
Bobby Shmurda Was Denied Parole He might be locked up until December 2021.
chat room Yesterday at 4:47 p.m.
The Love Fraud Creators Have Some Post-Finale Rick Scott Smith Updates for You Rachel Grady and Heidi Ewing discuss their docuseries’s finale and the con artist who tried to mansplain success while wearing a prison jumpsuit.
endings Yesterday at 4:20 p.m.
Let’s Talk About the Antebellum Twist This movie cares little for its characters, who are brutalized in the filmmakers’ pursuit of one thing: tricking the audience.
By Robert Daniels
trailer mix Yesterday at 3:29 p.m.
Coronavirus Won’t Stop Roulades in This New Great British Baking Show Trailer And a new presenter joins the team.
interview Yesterday at 3:18 p.m.
The Deftones Have (Almost) Found Balance Chino Moreno opens up about the band’s process, its diverse influences, and the legacy of nu metal.
overnights Yesterday at 2:18 p.m.
The Real Housewives of Potomac Recap: Not Buying It Ashley tells the ladies what’s going on with her marriage and Everyone. Has. Questions.
the industry Yesterday at 2:17 p.m.
The 2020 Emmy Awards Were the Least-Watched Ever And here’s why that’s not a surprise.
tiff 2020 Yesterday at 2:09 p.m.
Netflix Spent a Lot of Money at the Toronto International Film Festival Halle Berry’s new movie, a Shia LaBeouf–Vanessa Kirby drama, and the Zendaya-starring Malcolm & Marie are all headed to the streaming platform.
By Chris Lee
tv review Yesterday at 1:21 p.m.
The 2020 Emmys Paradox Normalcy was invited to this year’s Emmys, but its plus-one was a pervasive sense of abnormality.
musicians on their own music Yesterday at 1:00 p.m.
7 Key Elements of the A.G. Cook Sound, According to A.G. Cook The PC Music leader and creative director for Charli XCX steps out with two debut albums.
By Justin Curto
traditions Yesterday at 12:21 p.m.
It’s September 21, So Here’s a Demi Adejuyigbe Interview “It kind of feels like a prison I’ve built myself.”
By Bethy Squires
More Stories