The latest trailer for the new season of Game of Thrones is here, which means it’s time to look it over with the reverent diligence of a Talmudic scholar. Ready? Put on your spoiler goggles, turn up the brightness of your screen (it’s a very dark trailer) and let’s go! 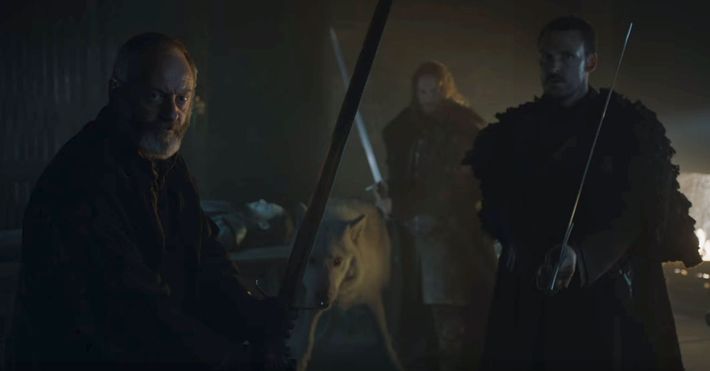 We begin with a shot from the first trailer, of Davos standing guard over Jon Snow’s body, preventing somebody (likely the Night’s Watch mutineers) from getting in. Do they want to burn the body so it doesn’t become a wight? Note that Davos has got Ghost in tow, which could be interesting if you read up on the theories of where Jon’s soul went after his death. 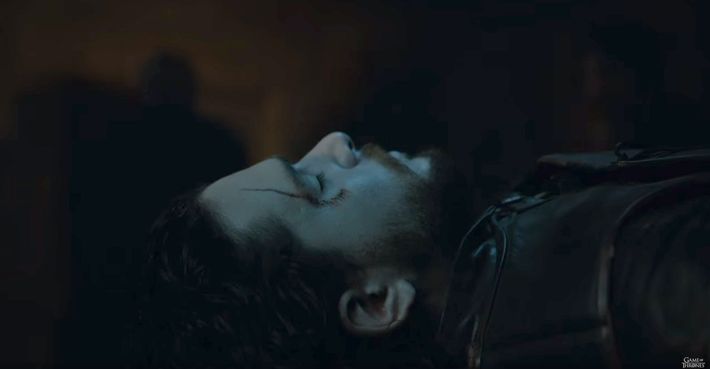 And here’s the man of the hour himself. Yup, still dead. 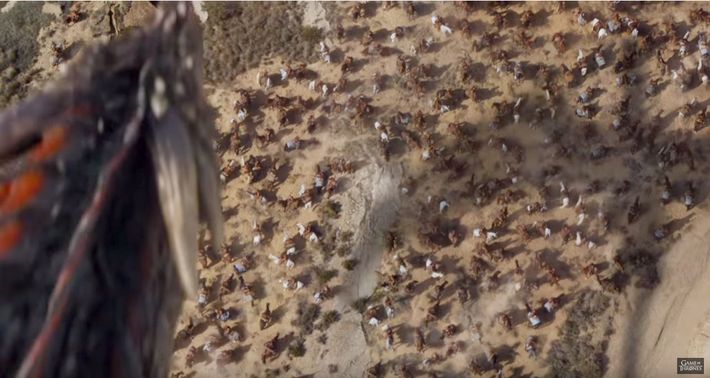 What’s happening with the Dothraki this season? If this shot is any indication, a bunch of them are about to get eaten by a dragon. 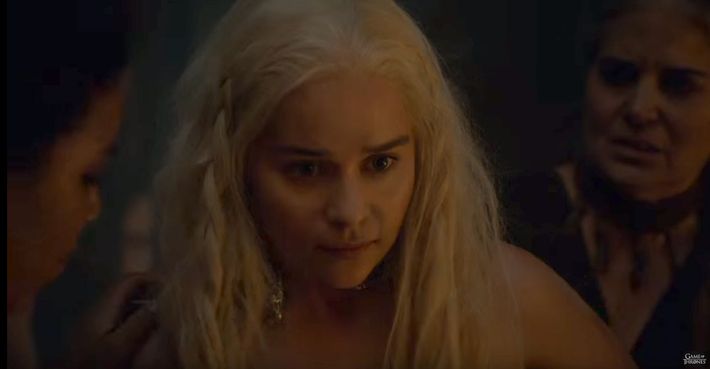 The shot directly preceding this one was the Dothraki ripping Daenerys’ clothes off. Tits and dragons, indeed. 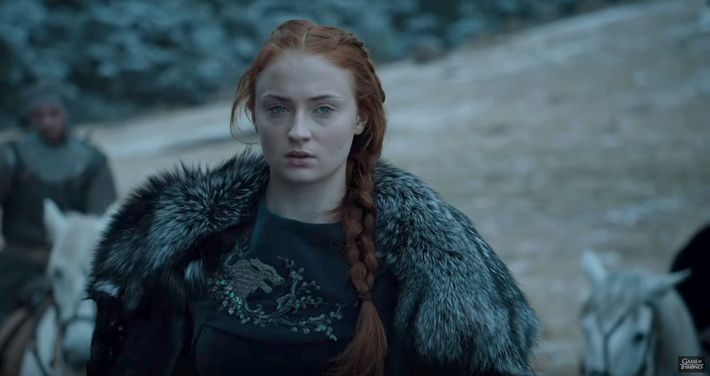 Here’s Sansa aboard a war horse, talking about how badly she wants revenge against the Boltons. She looks ready to take it. 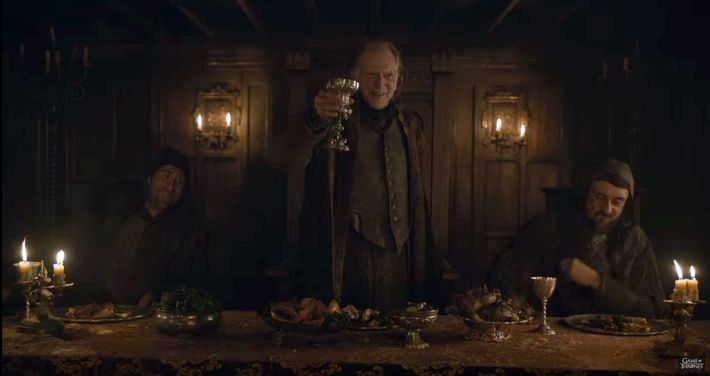 A shot of the Freys. Is this a flashback to the Red Wedding, or are these guys still partying it up? Three years later, you’d think they’d get better hats. 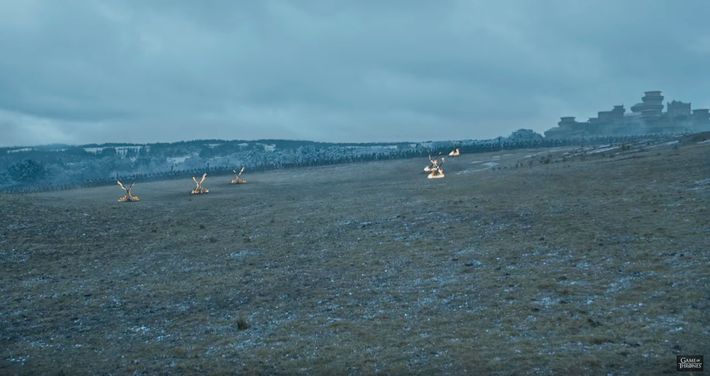 We’ve heard rumblings about a massive battle outside Winterfell this season, and this would appear to be the battlefield. In case you still weren’t aware that the Boltons were evil, they’re literally burning crosses here. 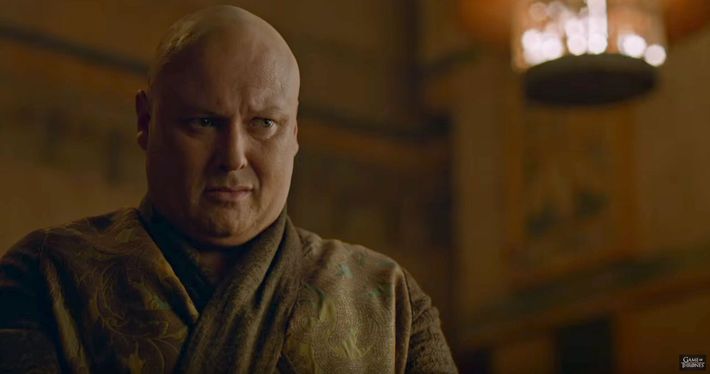 TFW she keeps suckin’ but you’re a eunuch. 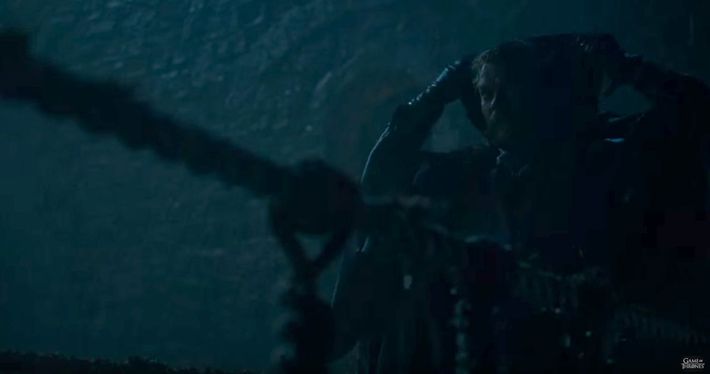 Let’s play Game of Throne Clue! Euron Greyjoy, on a bridge, with the … Faceless Man? 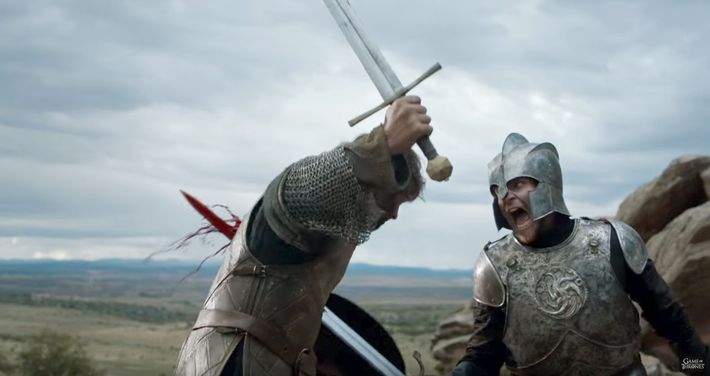 For book fans, here’s our look at the Tower of Joy flashback, featuing one unlucky Northman getting run through by a particularly rabid Targaryen soldier. Personally I would have preferred Kingsguard armor but I am aware that complaining about it would make me among the worst people in the world. 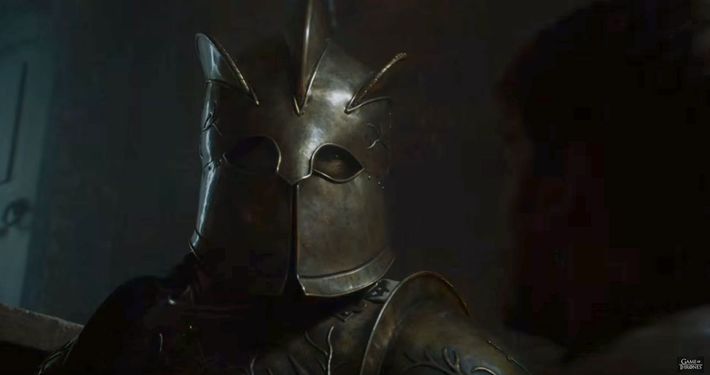 Speaking of the Kingsguard, Ser Robert Strong is ready for his close-up. 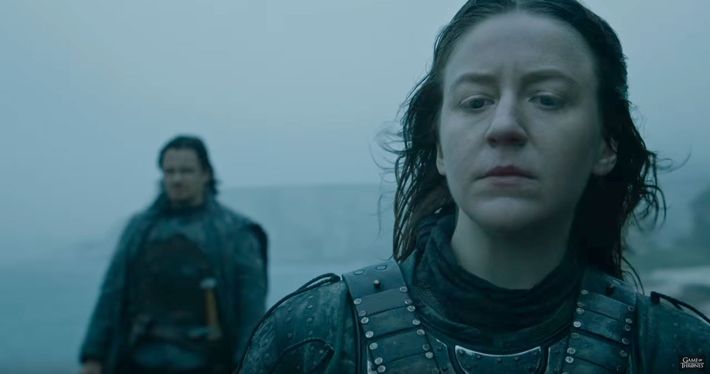 Yara Greyjoy is back, which fits with other indications that we’re getting some version of the Kingsmoot storyline this year. The good news — there don’t appear to be any dogs around. 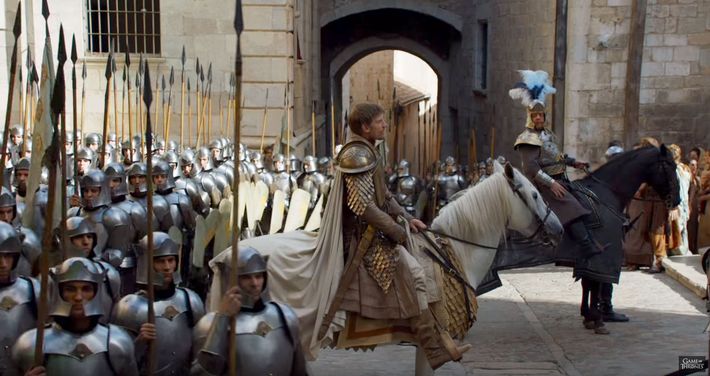 There’s a lot going on in this shot of Jamie and the Tyrell soldiers confronting the Faith Militant, but our absolute favorite bit is Mace Tyrell’s helmet. Such magnificent plumage! 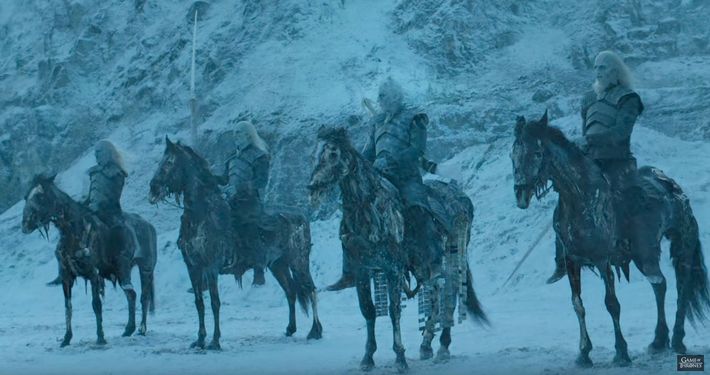 None of these guys are wearing extravagant feathers on their heads. Swipe left. 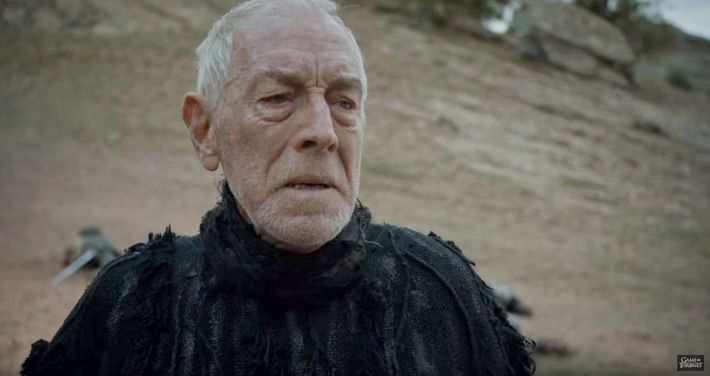 Our new Three-Eyed Raven, getting the full Lubezki treatment. 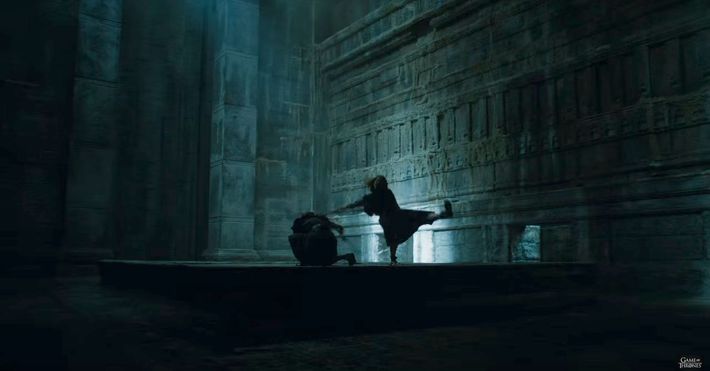 This is Arya Stark, going all Crouching Tiger in the House of Black and White. 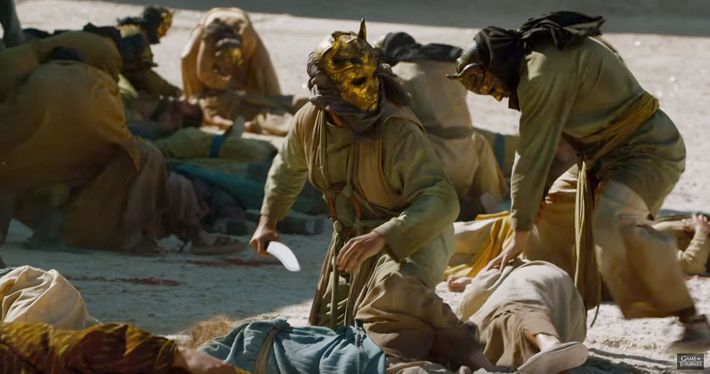 Hooray, these guys are back. Can’t wait for all the nuanced, interesting action they bring to the scene. 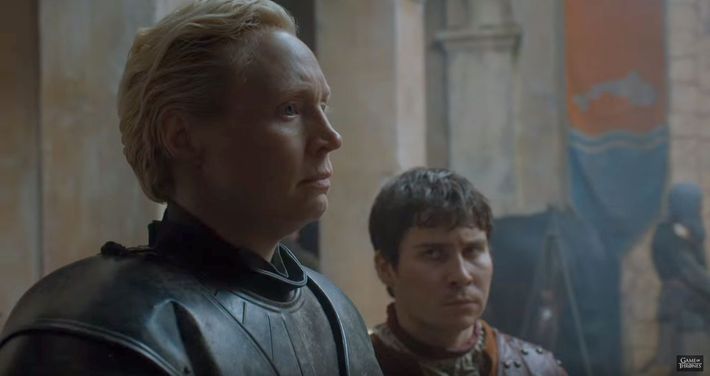 Brienne and Pod have stopped waiting for that candle to be lit, and now they’ve headed south. From the looks of that Tully banner, they’re in Riverrun. But on whose side? 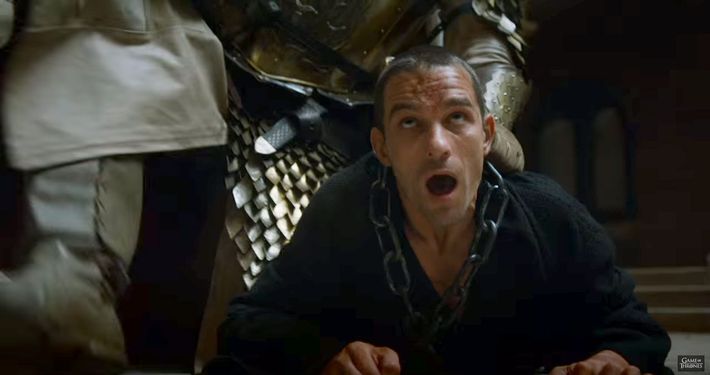 The Faith Militant are almost as boring as the Sons of the Harpy, but as long as they’re being smashed by FrankenGregor, I’ll watch. 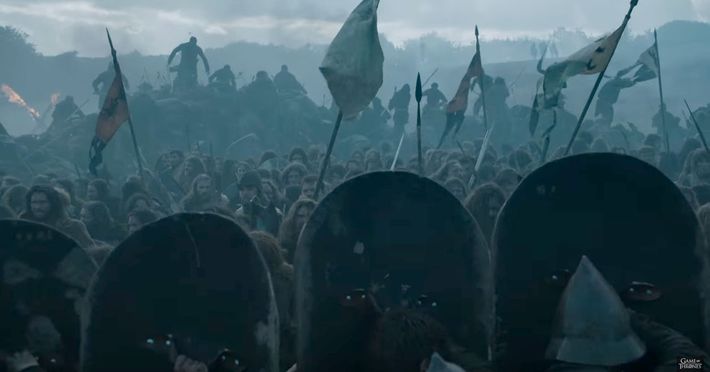 More from the Winterfell battle. From what we saw in the first trailer, this appears to be Bolton soldiers forming a shield wall against an army of Wildlings. Or, judging from the sigils on the flags, could they just be a particularly rabblesome group of Northmen? Either way, check the background — are those giants? 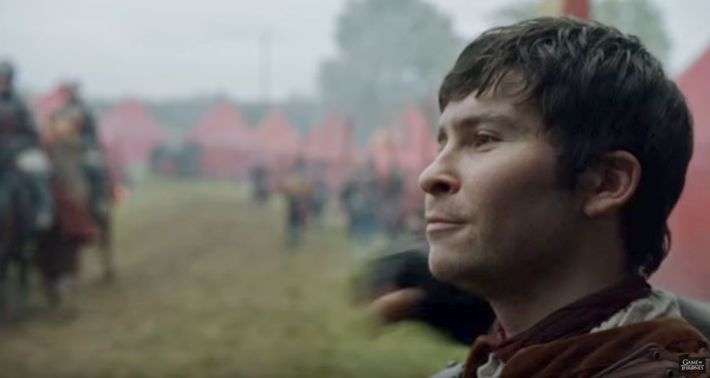 Podrick relaxes at a Lannister camp site, unaware that he’s about to be snatched up from behind. This shot was in among a bunch of very dramatic ones in the trailer, but on its own, it’s almost a comedy shot, like something out of Newsradio. Hopefully our hunch is correct and this is just comical hijinx, which means that he’s all right! (He probably is not all right.) 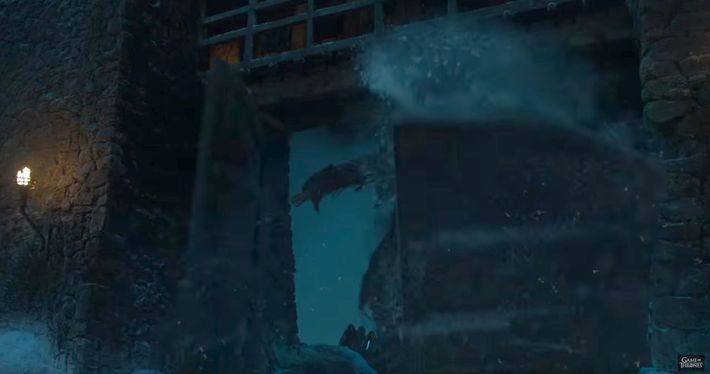 Speaking of giants, here’s one breaking down a gate. Maybe at Winterfell? 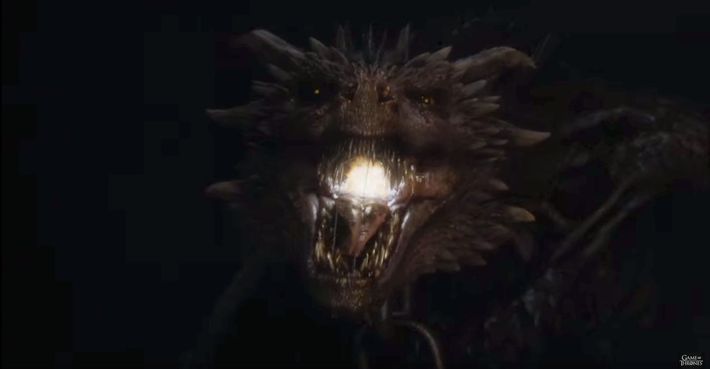 Finally, we’ll close with this shot of a dragon shooting flames in Meereen’s catacombs. From context, it seems likely he’s aiming for Tyrion, but why? Is he attempting to re-enact part of [character redacted]’s book plot? If so, let’s hope it ends differently for him.

trailer mix 5:01 p.m.
Watch the Very Cute Love, Victor Trailer That Was Somehow Too Much for Disney+ The Love, Simon follow-up is out June 19.
'ello! 2:10 p.m.
Dance, Magic, Dance Because Labyrinth Is Getting a Sequel Doctor Strange’s Scott Derrickson is attached to direct.
backstories 2:07 p.m.
How Mythic Quest Wrote, Filmed, and Edited Its Quarantine Episode in 3 Weeks “We didn’t want to do 30 minutes of Zoom jokes.”
By Jackson McHenry
watch me sweep up these m's 1:04 p.m.
Megan Thee Stallion Finally Gets a No. 1 Thanks to TikTok, Videos, and Beyoncé “Savage” finally completed its journey to the top.
pepe silvia approves 12:47 p.m.
The Gang Makes TV History With It’s Always Sunny’s Season 15 Renewal It will be the longest-running live-action comedy series ever.
comedy review 12:30 p.m.
In Douglas, Hannah Gadsby Strives to Manage Your Expectations Nanette is the “Why I’m Leaving New York” essay of comedy specials, and Douglas is the “Actually I’m Still Here” next chapter.
By Kathryn VanArendonk
mute all 11:42 a.m.
The Best Moments From The Real Housewives of Atlanta’s First-Ever ‘Zoomunion’ There’s an argument to be made that virtual reunions are actually better than normal reunions.
legacies 11:00 a.m.
On Watching Mad Men in the Middle of a Pandemic You can see our world’s present-day crisis peeking through the negative spaces in Matthew Weiner’s 1960s saga.
By Matt Zoller Seitz
show guides 11:00 a.m.
Mad Men Is a Show That’s Built to Last Your complete guide to watching (or rewatching) the Matthew Weiner series.
By Jessica Pressler and Chris Rovzar
bachelor nation 10:43 a.m.
Rachel Lindsay Calls Hannah Brown’s Actions ‘Insincere’ After N-Word Controversy “Hannah said that. ‘It felt icky to give a statement.’ And I believed her when she said it.”
good one podcast 10:33 a.m.
Inside Quarantine With Oh, Hello’s George St. Geegland and Gil Faizon  The podcast trailblazers join Good One while self-isolating together on the Upper West Side.
By Jesse David Fox
trailer mix 10:30 a.m.
I May Destroy You Trailer: Michaela Coel’s New Show Warns Us Right in the Title Her Chewing Gum follow-up tackles sexual assault head-on.
vulture guides 10:20 a.m.
The Class of 2020’s Guide to All the Virtual Celebrity Commencement Speeches Including Barack Obama, Barack Obama, and Barack Obama.
movie theaters 10:00 a.m.
What Will Make Us Feel Comfortable Going to the Movies Again? And what will a post-pandemic theater look like?
By Bilge Ebiri
excerpt 9:00 a.m.
‘Would You Be My Kiss‑in Partner?’ During a protest at Harvard, Josh Oppenheimer’s kiss shook me into the awareness that I was not quite a man.
By Meredith Talusan
coronavirus 8:21 a.m.
Here Are All the Movies Delayed Because of Coronavirus With updated release dates where available.
controversies 8:00 a.m.
Doja Cat Issues Statement Addressing Allegations of Racism “I shouldn’t have been on some of those chat room sites, but I personally have never been involved in any racist conversations.”
vulture picks 7:30 a.m.
25 Notable New Releases Over the Next Two Weeks Lady Gaga’s new album, Anna Kendrick in Love Life, Ramy season two, and more.
the longest lives 7:05 a.m.
Our Fragile Gerontocracy Old people have never been so powerful — or, now, so vulnerable.
By Mark Harris
congratulations class of 2020! Yesterday at 11:57 p.m.
Jennifer Coolidge’s Spooky Advice for Emerson Grads Is Going to Be Tough to Beat Which she delivers to a candlelit table of haunted dolls in formal wear.
More Stories