James Franco’s remake of Mother, May I Sleep with Danger? is shaping up to a complete reimagining of the 1996 Tori Spelling TV-movie classic — and his take promises to have some real bite. Back in December, we told you Franco was spearheading a revival of the NBC movie for Lifetime, with Spelling onboard to star as the titular mother (rather than the danger-seeking daughter she played in the original).

Now, Vulture can exclusively report that Franco is also one of the stars of the movie and that original cast member Ivan Sergei (he was the murderer) will return for the new film. In addition, we’ve learned that Leila George (daughter of actors Vincent D’Onofrio and Greta Scacchi) will assume the daughter-in-distress role filled by Spelling two decades ago, and that the movie will make its Lifetime premiere on June 18. But the biggest news about Mother is that Franco has also come up with a very radical twist for his remake: It’s now a same-sex vampire love story. 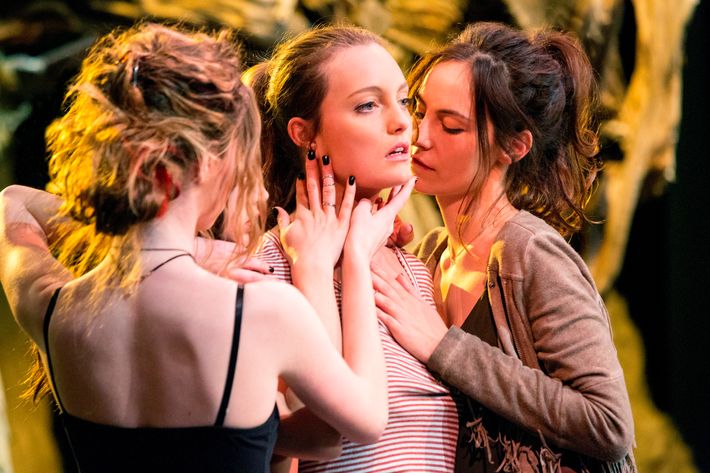 Per Lifetime’s description of the 2016 Mother, the film now has college-age theater major Leah (George) surprising her mom Julie (Spelling) with a new love interest— a woman named Pearl (played by The Leftovers alum Emily Meade, who also stars in Franco’s upcoming HBO series The Deuce.) “Julie tries to embrace the idea of Leah’s new love interest, but she can’t shake the feeling that something is very wrong,” Lifetime’s  official log line for the movie reads. “Julie’s suspicions lead to a startling discovery about Pearl that puts Leah in serious danger. Will Julie be able to save her daughter from an eternity of heartache before it’s too late?” While Lifetime isn’t getting any more specific about the plot, it is calling the movie a “vampire love story that brings a whole new meaning to ‘sleeping with danger,’” so it’s probably a safe bet to assume Meade’s Pearl is a vampire out to pull a Twilight on young Leah. The network isn’t yet saying anything about Franco’s onscreen character or whether Sergei will play the same bad man he did in the original. 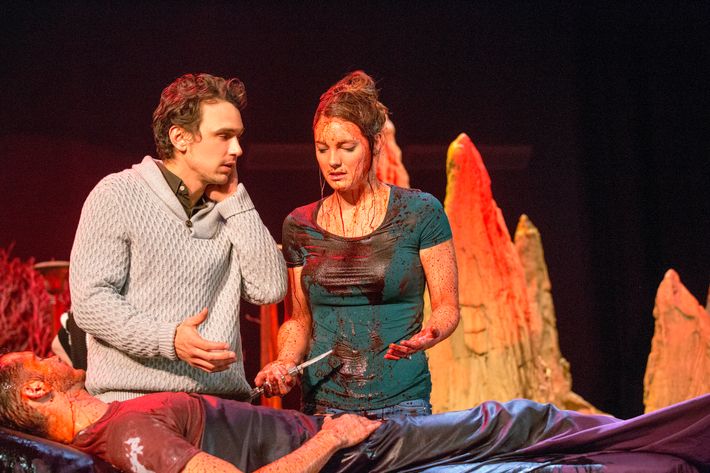 Production on the new Mother has already wrapped, and to get audiences ready for the remake, the original film will be added to the network’s subscription-based streaming service, Lifetime Movie Club, on April 29. Franco, meanwhile, told TV critics in January that his involvement with the remake “came out of Will Ferrell having done A Deadly Adoption. Will told me that he was actually inspired by my going on General Hospital when he did that. Then Lifetime came to me and [asked if I would] like to recreate one of their movies like Will did. I said yes, as long as I could change it a bit. It has some similar elements of the original but it’s completely revamped …. You’ll have a very non-Lifetime movie on Lifetime.” The 2016 Mother is being produced by Sony Pictures Television in association with  Franco’s Rabbit Bandini Productions. Franco is also an executive producer on the movie, along with with Vince Jolivette, Diane Sokolow, and Rachel Verno. Amber Coney (Class) wrote the film from a story by Franco, and Melanie Aitkenhead (Shang) directed.

+Comments Leave a Comment
Franco’s MMISWD? Will Be a Lesbian Vampire Movie

gods and monsters 11 mins ago
Chapter 1: Everything We Know About the Future of the DC Universe Congrats to Viola Davis, who remains the most unscathed DC Universe actor.
2 king 2 hill 3:48 p.m.
Travel Back to Arlen in a New King of the Hill Reboot Hulu announced a revival of the beloved series on January 31.
timelines 3:10 p.m.
The Complete History of Ezra Miller’s Controversial Career From kidnapping allegations to a plea deal for unlawful trespassing to the DCEU’s master plan.
chat room 2:48 p.m.
Nelson Franklin Is Thankful He’s Not the ‘Uglier George Santos” Comedy’s go-to That Guy discusses appearing in — or auditioning for — most of your favorite sitcoms.
celebrity memoirs 2:14 p.m.
Pamela Anderson Knows Even a Memoir Can’t Tell All Though there are not many new revelations, ten stories stuck out.
essential episodes 2:02 p.m.
Columbo Is the Ultimate ‘Rich People Are Weird’ Show Peter Falk’s rumpled detective takes down lots of wealthy loonies.
sad gay representation 1:18 p.m.
The Last of Us Fans Are Screaming, Crying, Streaming Linda Ronstadt “Long Long Time” is running (back) up that chart.
sundance 2023 1:04 p.m.
Sundance’s Year of Existential Crisis Yielded Back-to-Back Megadeals Insiders call this year’s Sundance a return to form, with several all-night bidding wars and multiple eight-figure deals.
By Chris Lee
backstories 12:35 p.m.
‘There Couldn’t Be Any Normal Scenes in This Movie’ Damien Chazelle and his collaborators explain Babylon in three key scenes.
By Bilge Ebiri
hive mentality 12:11 p.m.
Dominique Fishback Isn’t Doing Much to Rehabilitate Stan Culture’s Image As an obsessed fan in Donald Glover’s new series, Swarm.
hbo axe’d 12:04 p.m.
HBO Max’s Abandoned TV Shows Adopted by Tubi and Roku More than 200 titles from Warner Bros. Discovery are moving.
album review 12:00 p.m.
Lil Yachty’s Great Gig in the Sky The rapper’s surprising new psych-rock album delights in sensory overload.
vulture 10x10 12:00 p.m.
The Scooby Puzzle 7-Down, Ten Letters: Batman’s Home
reading is what? 12:00 p.m.
And Don’t F&%K It Up Chronicles Drag Race From Vaseline Lens to Emmy Gold “Come for the tea, stay for the shade.”
yelling 11:52 a.m.
It’s Time for a Departure From ‘Bottle Episode’ Another format-breaking episode, another widespread misapplication of a specific TV term. This must end.
listings 10:31 a.m.
Joan Didion’s Apartment Is for Sale Missed out on the estate auction? Seven and a half million dollars will get you the whole house.
obits 10:13 a.m.
Cindy Williams of Laverne & Shirley Dead at 75 “Knowing and loving her has been our joy and privilege,” said her children in a statement.
crime 10:10 a.m.
Chicago Prosecutors to Drop Sex-Abuse Charges Against R. Kelly Two prior convictions guarantee Kelly will be behind bars for decades.
grammys 2023 10:00 a.m.
Who Will (and Should) Win at the 2023 Grammys? And will Beyoncé finally earn an Album of the Year trophy?
oscars 2023 8:00 a.m.
Lydia Tár Is Not an Art Monster The quiet redemption of awards season’s most divisive character.
More Stories