When Outlander premiered in the summer of 2014, its opening credits became an instant favorite among TV viewers, even prompting one Vulture editor to claim she wanted them played at her funeral (okay, that was me). The ethereal visuals, haunting score, and breathtaking singing left a powerful impression. “They’re constructed simply but artfully, I like to think,” co-producer and editor Michael O’Halloran told Vulture. “I had Terrence Malick in the back of my head while I was doing them.” Now, Outlander is back for season two with a slightly edited titles sequence to reflect the show’s new tone as it moves the drama from Scotland to France. But what do these new credits tell us about our beloved time-traveling couple, Claire and Jamie? Let’s stand beside the stone circle and see what the future has in store for us.

To our great relief, “The Skye Boat Song” remains the musical backdrop for the title sequence. Scored by composer Bear McCreary and sung by his talented wife, Raya Yarbrough, the lyrics stay true to season one’s adaptation of the classic Robert Louis Stevenson folk song, with one addition: a verse sung in French. “The tone of the show changes so radically,” said McCreary at a recent Television Academy event. “We don’t want to completely and arbitrarily reinvent the show, but we also have to change and acknowledge our new location, our new tone.” The delicate string music you hear comes from a Baroque instrument called a viola da gamba. McCreary hoped to evoke the music performed in the operas, the streets, and the courts during the time period represented on the show. “Our starting point was creating something authentic. When you’re in Versailles, you’re hearing music that was written by composers of that time time period,” he explained. “Ultimately, I took all that stuff and tried to make something that was true to the emotional journey. Because if it’s historically accurate that’s great, but if it doesn’t feel like Claire and Jamie, our heroes from season one in this new environment, then it doesn’t work.”

Medicine will also continue to play a large role in Claire’s life. “We’re trying to maintain that Claire’s a healer, that’s her primary occupation,” said O’Halloran. We see in the premiere how Claire’s advanced medical knowledge can get her into trouble in her new location, but shots of broken limbs and brass instruments in the credits suggest that Claire could still have a few things to learn. Perhaps a new medical practice or group of savvy companions are in store for our heroine.

And while the Frasers may be out of the rough terrain of the Scottish Highlands, they are not out of harm’s way. “It’s still dangerous, but a different kind of danger,” said O’Halloran of their new surroundings in Paris. Claire already made a new enemy — the devious Comte St. Germain — in the season two premiere. Could more adversaries be nearby? The shots of slithering snakes and whispering lips hint that the courts of France could be just as treacherous as the moors of Scotland. 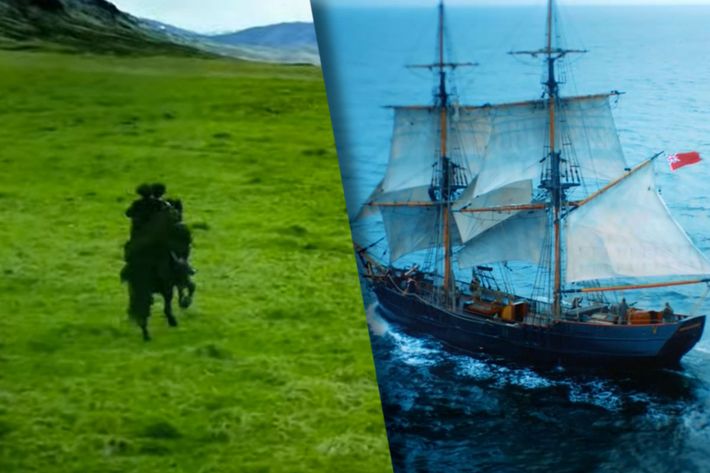 Perhaps the strongest visual cue in the new credits comes at the very end. The sequence from last season ended on a shot of Jamie and Claire riding a horse into the Highland sunset, while the season-two titles end on a shot of the boat taking the couple to France. “The continuation of that journey was Ron’s big idea,” says O’Halloran, of showrunner Ron D. Moore’s vision. They may have traveled through time and space to be together, but our lovers have an entire season, and seven more books of material, to get through, reminding us that we’re only at the beginning of this adventure.

the industry 8:00 a.m.
The Future of Agenting Isn’t in Hollywood Jeremy Zimmer has been leading United Talent Agency for 30 years. He sees a complex road ahead for the 10-percenter business.
overnights 8:00 a.m.
And Just Like That … Recap: The Hobbes Rom-Com The Miranda stuff has been a mess from the beginning, and it looks like it’s about to get a lot messier.
advice 8:00 a.m.
How to Overcome Accent Anxiety in 4 Simple Steps Few things scare an actor more than mangling an accent — so say their dialect coaches. Here, the pros offer a few words of advice.
By Chris Lee
last night on late night 12:47 a.m.
Watch Jimmy Fallon Play Every Streaming-Service Soundmark You got your ta-dum in my bwaaah!
streamliner 12:24 a.m.
Winter Olympics: NBC to Stream ‘Every Minute of Every Live Event’ on Peacock Including the opening and closing ceremonies.
overnights Yesterday at 10:30 p.m.
The Real Housewives of Orange County Recap: Passport Control The Cabo trip is about to be ruined by Hurricane Noella.
only in new york Yesterday at 9:04 p.m.
Watch Bill Murray Give a Surprise Concert in Washington Square Park Featuring a rendition of “I Feel Pretty.”
obits Yesterday at 7:42 p.m.
Marty Roberts, of Legendary Lounge Act Marty & Elayne, Has Died The married duo played L.A. club the Dresden six nights a week for more than 40 years.
the law Yesterday at 7:12 p.m.
Jay-Z and Others Urge New York to Stop Using Rap Lyrics As Evidence Hova and other rap luminaries came together to end what they see as a prejudicial practice.
rhoslc Yesterday at 6:30 p.m.
Mary Cosby Broke Her Silence on Skipping RHOSLC Reunion On Twitter Spaces, of all places.
sitcoms Yesterday at 5:54 p.m.
It’s the Perfect Time for Abbott Elementary Teachers need to feel seen right now, and this very funny workplace comedy has its eyes wide open.
awards Yesterday at 5:17 p.m.
Jon Stewart Recognized With Mark Twain Prize for American Humor He’ll be presented with the award on April 24.
vulture quiz Yesterday at 3:45 p.m.
Quiz: Which Cult Are You In? Do you worship Search Party’s Dory, Yellowjackets’ haunted forest, or the almighty dollar over all else?
blabbermouths Yesterday at 3:12 p.m.
Is Brian Cox Allowed to Be Saying All This? L-to-the-O-G off, Brian.
switched on pop Yesterday at 2:57 p.m.
Behold the Indie K-pop Star  With his new album There and Back Again, Eric Nam searches for footing outside the industry machine.
1.5x speed Yesterday at 2:35 p.m.
Magic, New Girl, and Julia Fox: 5 Podcasts Worth Trying This Week Plus: tennis drama!
"acting" Yesterday at 2:32 p.m.
Sebastian Stan’s Nipples Did Not Go Method for Pam & Tommy In this economy?
close reads Yesterday at 2:21 p.m.
Trinity Valley Deserved Better From Cheer The scrappy team with the gigantic chip on their shoulders and a simmering dislike of Navarro should have been season two’s central focus.
overnights Yesterday at 1:24 p.m.
The Book of Boba Fett Recap: Back to the Sarlacc When Fett met Shand.
r.i.p. Yesterday at 12:59 p.m.
Gaspard Ulliel, César Winner and Moon Knight Actor, Dead at 37 The French actor plays Midnight Man in the upcoming Marvel series.
More Stories