Vulture has the exclusive reveal of the movie poster for Woody Allen’s latest film, Café Society, and this one-sheet inspires us to think of both the past and the future. That we’d be reminded of a bygone era is a given once you see the chic poster, since it channels the old-fashioned style that suffuses Allen’s latest, a love triangle set in the 1930s where Jesse Eisenberg is torn between a charming girl in Hollywood (Kristen Stewart) and another who glides through New York’s high life (Blake Lively). But the poster reveal has also got us thinking ahead, since Café Society will bow in just a few weeks’ time as the opening-night film of the Cannes Film Festival. General audiences will have to wait until a little later to see it — the film is being released by Amazon Studios and Lionsgate this summer — so consider this image an aperitif for now. 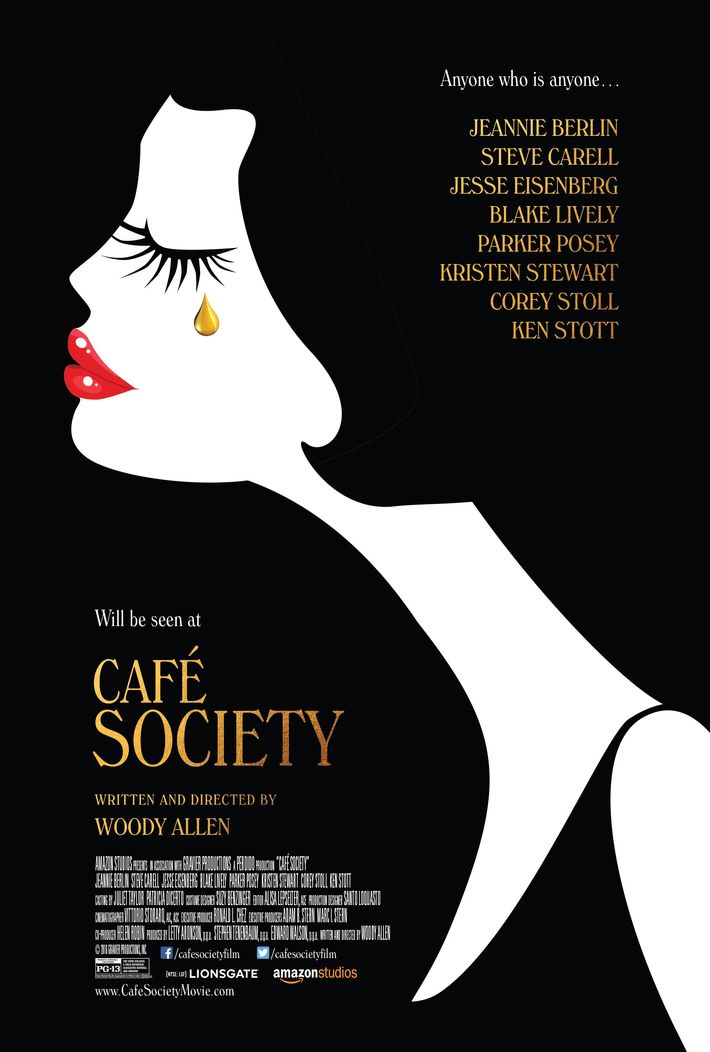 spooky scary 24 mins ago
Disney Welcomes Danny DeVito Into the Haunted Mansion Cast He’ll be playing a smug professor.
overnights 7:47 p.m.
Y: The Last Man Recap: Not Like Other Cops Wow, was I wrong when it came to Roxanne.
swoon 7:37 p.m.
We’re Getting a To All the Boys Spin-off Show About Kitty Song Covey Anna Cathcart will star as Lara Jean’s little sister.
overnights 6:52 p.m.
90 Day Fiancé: The Other Way Recap: Alina’s Mom Is My Hero Finally, Steven is destroyed.
holy moses! 5:27 p.m.
40 Years Later, Mel Brooks Is Making History of the World, Part II “I can’t wait to once more tell the real truth about all the phony baloney stories the world has been conned into believing are History!” Brooks said.
what's in a name? 4:12 p.m.
Write Kanye West Off — He Legally Goes by Ye Now The request has been approved by a Los Angeles judge.
faq 2:50 p.m.
Everything We Know (and Don’t) About the 2021 IATSE Strike Employees could still reject the tentative deal with AMPTP.
new depths 2:19 p.m.
How The Rescue Re-enacted the 2018 Thai Cave Rescue With the Divers Who Lived It Directors and husband-and-wife duo E. Chai Vasarhelyi and Jimmy Chin talk re-creating the rescue with some of its real-life heroes.
the law 2:17 p.m.
Cuba Gooding Jr.’s Groping Trial Will Start February 1 “This case has been on my calendar for two years.”
trailer mix 1:03 p.m.
The Lost Daughter Trailer: A Beach That Makes You Sad Olivia Colman, Dakota Johnson, and Jessie Buckley star in the debut film from writer-director Maggie Gyllenhaal.
chemical castration 12:52 p.m.
What Can We Glean From Succession’s Season-3 Credits Sequence? ATN News has some new hate to promote.
respect the classics 12:21 p.m.
Paul McCartney and Taylor Swift Roll Forward As Rock Hall of Fame Presenters For Foo Fighters and Carole King, respectively.
chat room 12:13 p.m.
What Judy Greer Thinks of That Halloween Kills Ending Judy Greer on her big moment in the Halloween Kills finale, the curse of the Christmas sweater, and having lunch with Kyle Richards.
endings 12:00 p.m.
Where Does James Bond Go From Here? No Time to Die’s ending is a cathartic rebuke to the nauseating interconnectedness of just about every other franchise blockbuster. But what’s next?
By Bilge Ebiri
drama in the air tonight 11:10 a.m.
Remember the Phil Collins Alamo Artifacts Battle Years after his massive donation, plans for the Texas museum are imploding.
quar amor 10:41 a.m.
Succession’s Sarah Snook Had a Secret Wedding Earlier This Year She married Australian comedian Dave Lawson — with co-star Ash Zukerman as witness.
superlatives 9:00 a.m.
The Best and Unforgettable of the Fugees, According to Pras “We’re Caribbean, Haitian, Brooklyn. That rice and beans, plantains, machetes. We’re coming with that vibe.”
By Craig Jenkins
one night only 8:54 a.m.
CBS Nabs Adele Concert Special Featuring an Interview With Oprah Adele One Night Only airs Sunday, November 14.
double consciousnesses 8:00 a.m.
The Fiction of the Color Line From Nella Larsen to Mariah Carey, Black women writers have long used passing stories to crack our façades of race, class, and gender.
By Brittany Luse
last night on late night 1:15 a.m.
Watch Desus & Mero’s Triumphant Return From Hiatus Drake goss, free food across NYC, and whether J.Lo lets Ben smoke indoors.
More Stories