Has there ever been a more exhausting No. 1 single in the country than “Panda” by Desiigner? And not “exhausting” in the figurative “I’m over it” sense, but in the literal, physical definition of the word. Tiring. Fatiguing. By the end of “Panda,” I feel like I always imagined I would after an exercise class.

And that’s just listening to it. Watch Desiigner perform it and it goes from Darren’s Dance Grooves to Barry’s Bootcamp. He raps the song like it’s his last, spitting allegedly English lyrics into the microphone while triple-axel dabbing sporadically through his free-skate of a performance.

Last night, all of this was on display as he made his network television debut on The Late Show With Stephen Colbert.

Before you watch the video, turn on closed captioning. Trust me, you won’t regret it. And have fun with it. Start with English captions so you can learn that he’s saying “Black X6” and not “Blanket Sits.” But then, 30 seconds in, switch it up a bit. My personal favorite: Icelandic. 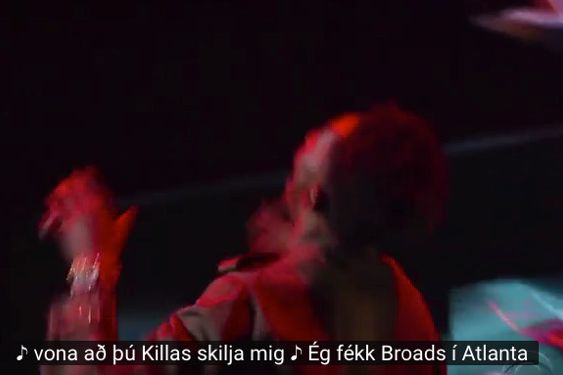 Watching the performance, I was certain that nothing could distract from Desiigner’s liturgical sashay. But then, after a minute and a half, the camera makes an extremely questionable decision: flashing to the studio audience.

Yes, there was applause when the performance began, and yes, you knew there was an audience out there because it’s late-night television — but it’s easy to forget they’re there when Desiigner starts rapping in tongues while stomping on ants.

You could run a picture of the crowd in the encyclopedia next to the entry for “confusion.” It’s a mixture of “I think this is fun” and “help” and “should someone be calling 911?” and “New York, concrete jungle where dreams are made of.”

This is magic. It’s like an out-of-town church group accidentally booking an event at La Marina in July. The clapping is so off beat that it accidentally gets back on beat 20 seconds later.

Not to get into conspiracies, but there are some out there who believe that the shots of the stage and the shots of the audience in this video are not just from two different nights, but actually from two completely different points in history. I don’t have proof, but there’s a 75 percent chance they green-screened a Lee Greenwood crowd into a Desiigner performance.

But while this scandal is important, it’s not even the most important part of the video. Let’s just say this was the real audience. Despite the off-beat claps and overall confusion, everyone seems to be having a fun time.

Everyone, except this one guy. 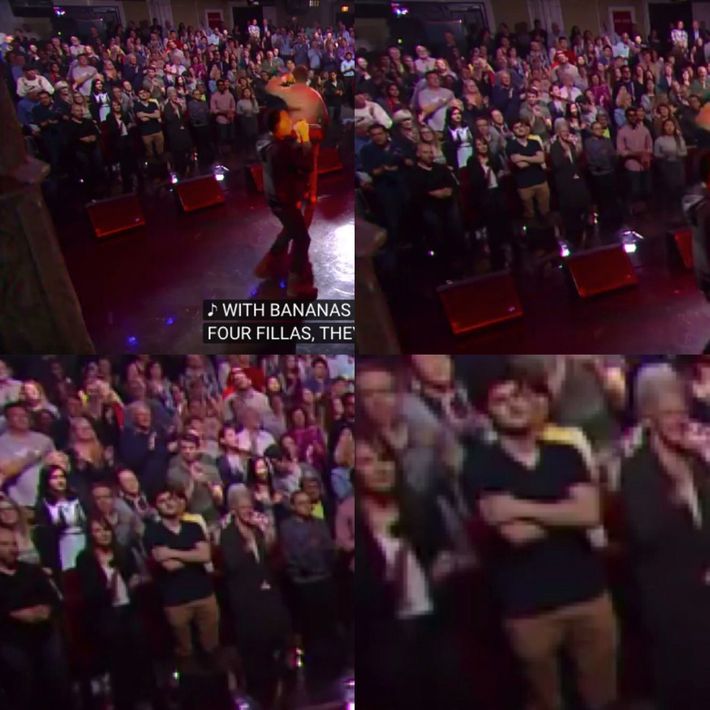 What the F, arms-folded-front-row-blurry man? What’s with the mean mug. He’s posted up like Desiigner stole his whole schtick or something.

Seriously, imagine reacting to this? 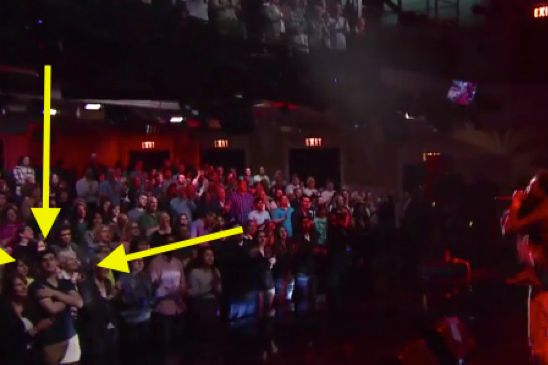 I don’t know what the beef is between Desiigner and arms-folded-front-row-blurry man. They both seem like great guys, so you just hate to see this.

I think I speak on behalf of all of us when I say, I hope they work it out. Panda.

+Comments Leave a Comment
Breaking Down Desiigner’s Performance of ‘Panda’

hole-some content 28 mins ago
Outer Range’s 15 Hole-iest Moments, Ranked Life is short, let’s talk about a hole.
going to hollywood 1:07 p.m.
X Factor Alum Replacing American Idol Winner on The Voice Camila Cabello takes over for Kelly Clarkson this fall.
vulture 10x10 12:00 p.m.
The Hot Puzzle 3-Down, Four Letters: MacGuffin in a heist movie, maybe.
overnights 10:55 a.m.
90 Day Fiancé Recap: Bringing Up Baby Kudos to Emily’s parents for staying out of this fight.
bbmas 2022 9:02 a.m.
The Highs, Lows, and Whoas of the 2022 Billboard Music Awards Whoa: A fever dream of an opening.
since when Yesterday at 10:40 p.m.
Machine Gun Kelly Dedicates 2022 BBMA’s Performance to Wife and Unborn Child And on a Blood Moon, no less.
overnights Yesterday at 10:33 p.m.
Barry Recap: Justice Is Still Attainable If Barry does want to genuinely atone for what he’s done, what does that look like?
overnights Yesterday at 9:00 p.m.
The Real Housewives of Atlanta Recap: Let the Games Begin Playing games with the RHOA cast more often than not ends in orchestrated chaos.
overnights Yesterday at 8:57 p.m.
Gaslit Recap: Hot Tub Backroom-Deal Machine It’s pretty clear that Dean does not like himself right now. Nor should he!
another one Yesterday at 8:52 p.m.
Kourtney Kardashian and Travis Barker (Maybe) Got Married (Again) Maybe this time, we’ll be lucky.
timey wimey Yesterday at 7:20 p.m.
Oi Spaceman! David Tennant and Catherine Tate Are Coming Back to Doctor Who Are we bothered?
snl Yesterday at 7:02 p.m.
SNL Thinks Your Long-Term Boyfriend Is Old Enough to Run Errands All on his own!
2022 bbmas Yesterday at 6:52 p.m.
Here Are the Winners of the 2022 Billboard Music Awards A big night for Ye’s Christian/gospel rep.
snl Yesterday at 5:52 p.m.
Steve Martin Explains the History of the Whoopee Cushion on SNL Along with Selena Gomez!
overnights Yesterday at 3:06 p.m.
Saturday Night Live Recap: Selena Gomez Is Looking for Love Selena Gomez makes her SNL hosting debut in an episode that has more misses than hits.
overnights Yesterday at 2:00 p.m.
Conversations With Friends Recap: Kiss and Tell Bobbi is too self-absorbed to realize Frances has a crush of her own.
overnights Yesterday at 12:00 p.m.
Conversations With Friends Series-Premiere Recap: Just Being Polite We’re back to the Sally Rooney Cinematic Universe, this time investigating the inner lives of four friends/lovers.
yikes Yesterday at 9:00 a.m.
A Warning From the Future About The Time Traveler’s Wife A time-traveling TV critic considers Steven Moffat’s strangely chintzy, tonally odd adaptation of the 2003 novel.
theater review May 14, 2022
A Cherry Orchard That Chops Down Most of the Trees Chucking out the familiar in search of the truth.
celebrity May 14, 2022
Britney Spears Reveals She Lost Her ‘Miracle Baby’ “This is a devastating time for any parent.”
More Stories