On Sunday night’s episode of Game of Thrones, “Blood of My Blood,” the Tyrells finally broke out the army of theirs that we’ve heard so much about, sending hundreds of spearmen to the Sept of Baelor to free Margaery from the clutches of the High Sparrow. It didn’t work, of course — Margaery freed herself by arranging an alliance between King Tommen and the High Sparrow — but we’re not here to talk about that right now. What we’re here to talk about is the Tyrells’ armor, because, if you haven’t been paying attention, its appearance means that we’ve now seen all of the different styles worn by the soldiers of each principal House in Westeros. And so it’s only logical that we should now take the time to rank them all, from least coolest to coolest. (We’ve also included some minor houses and various other factions that have their own dress code.) Who comes out on top?

17. The Sparrows
Say what you will about religious movements here on Earth; none of them that I am currently aware of require anyone to carve a seven-pointed star smack-dab in the middle of their forehead. I’ve heard of “the bleeding edge of fashion,” but this is ridiculous!

16. The Sons of the Harpy
What is this, Greek theater? The only tragedy I see is that these guys are showing up to a sword fight wearing silk pajamas.

14. House Tyrell
Sigil-wise, the Tyrells get the short end of the stick. The Starks get a direwolf, the Lannisters get a lion, the Greyjoys get a freakin’ kraken, while the Tyrells get … a flower. (As an NYU alum, I can sympathize.) Their armor attempts to make lemonade from this fact, turning delicate petals into manly, manly helmets. At least Mace Tyrell leans into the ridiculousness. Look at that magnificent plumage!

13. House Bolton
The Bolton soldiers have different armor than the Starks’, which should have been the first indication that something was up with them. (Maybe the second — the fact that their sigil is a flayed man was the first.) The styling is fine here — solid, functional — but the fit is terrible. I haven’t seen this many oversize hats since the 1993 mockumentary Fear of a Black Hat.

12. House Baratheon
Also a bit generic, but the fit’s better here, and so is the styling. Dig those brims!

11. The Wildlings
Finally, something that’s not just a bunch of metal! This much fur is always a fashion risk — lucky for them, there’s no PETA in Westeros — and, while we applaud the effort, it doesn’t quite pay off: Not only do the snowsuits make the wildlings look a little bit like the kids in A Christmas Story, but in keeping with the relative egalitarianism of wildling society they’re also equally unflattering on every body type.

9. House Martell
Dorne is one of the only locations where Game of Thrones actually lets itself get away from its gray-and-brown color palette, and when Game of Thrones does something, it does it up to 11. You want color? Here are some bright oranges and yellows! You want warm-weather outfits? Here are some turbans! You want strong female characters? We’ll give you the Sand Snakes! 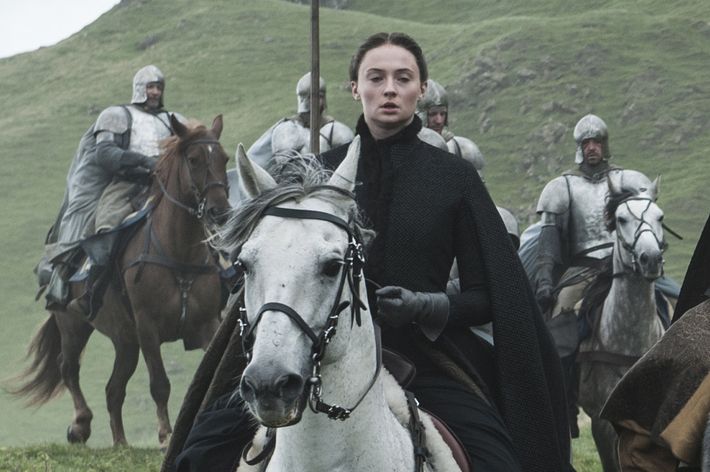 8. House Arryn
In keeping with the Vale’s reputation as the home of chivalry, this armor is glitzier than most. Unfortunately, it also perpetuates harmful stereotypes about plate armor being heavy and unwieldy. Historians have their eyes on you, Ser Vardis.

7. House Tully
The Tully uniform features a heavy use of scale armor, because their sigil is a fish. I hope I’m not alone in finding that hilarious.

6. House Targaryen
Yes, technically the fighters at the Tower of Joy should have been wearing their Kingsguard getups. But then we’d miss out on seeing this Targaryen armor, and it’s a treat: The sigil looks great, and the helmets are just dragon-y enough for the reference to work without getting into silly territory.

5. The Unsullied
Unsullied training calls for a radical psychological elimination of the self, and this armor works accordingly. No spicing the look up with some cute accessories here. This is fashion at its most functional — except for that little antennae thing on their helmets, which has always looked a little ridiculous.

4. House Greyjoy
The Ironborn might be terrible, but their armor is low-key brilliant. It’s practical — no cumbersome plate if you fall overboard — and stylish to boot. In a cool and wet climate, layering is always the way to go.

3. House Lannister
The Lannisters are one of the richest houses in Westeros, and their armor is appropriately gaudy. Look at all that gold — this stuff costs serious money. The helmets are slightly impractical, but who needs to see when you look this good? Points docked for the articulated eye-guards, though, which are a bit too peekaboo for my tastes.

2. The Dothraki
A minimalist classic: The blue accents really pop among the dusty landscapes of Essos, and the smokey eye works wonders at softening up the look. But be warned: This is not fashion for the people — you’ve got to have a very specific body type to pull this one off.

1. The Night’s Watch
The Night’s Watch are sworn to take no wives, hold no lands, and father no children, but no one said anything about rocking no sweet threads. As Karl Lagerfeld once said, “One is never over-dressed or under-dressed in a little black cape.”

+Comments Leave a Comment
Who’s Got the Coolest Armor on Game of Thrones?

overnights 5:00 p.m.
You Recap: Where the Wild Things Are Joe’s weekend camping trip with the boys is a shirtless romp, and it’s insane that none of them end up kissing.
movie review 4:46 p.m.
The Last Duel Is a Bro-Down Epic With a Metal Heart It’s not so much a history lesson as it is a savage, beautiful catharsis.
on comedy 4:10 p.m.
Netflix Fires Alleged Leaker As Dave Chappelle News Cycle Continues “The only person who gets fired is the Black person who was quiet the entire time,” the employee responded.
haunted pixels 4:00 p.m.
When Video Games Feel Haunted: Inside the Low-Res Horror Boom Indie designers are conjuring meta-scares with fuzzy pixelated graphics.
injuries 3:58 p.m.
America’s Got Talent: Extreme Stuntman Suffers Near-Death Accident on Set Jonathan Goodwin was airlifted to a trauma unit after a rehearsal went dangerously wrong.
overnights 3:20 p.m.
I Know What You Did Last Summer Series-Premiere Recap The teen-thriller classic gets an update with a new twist that makes it equal parts spooky and serious.
overnights 2:47 p.m.
You Recap: Coming Out of My Cage Sure, Joe and Love kill people, but they don’t want to be “the kind of people who kill people.” You know?
book review 2:08 p.m.
Fear and Loathing in ‘Asian America’ In The Loneliest Americans, Jay Caspian Kang tries but fails to restore meaning to an empty term.
overnights 2:00 p.m.
You Recap: Search Party Can we make it through even twenty minutes of this show without a parenting cliche?
vulture lists 2:00 p.m.
Every Ridley Scott Movie, Ranked Sizing up the director’s decades-long career.
accio 2:00 p.m.
Is Harry Potter on HBO Max or Peacock Right Now? Wingardium leviosa!
oscar futures 1:56 p.m.
Oscar Futures: Who’s in Front As the Race Kicks Off? Kenneth Branagh’s Belfast was the belle of Toronto, with King Richard and The Power of the Dog also drawing raves.
By Nate Jones
announcements 1:50 p.m.
We’re Really Doing It: Here’s Your First Look at Vulture Festival’s Lineup Insecure, Henry Winkler, Niecy Nash, The Great, Mira Sorvino, and, of course, Meredith and Brooks Marks are all joining us in person.
song review 1:46 p.m.
There Is Still Nothing Like New Adele Even if “Easy On Me” resembles, on its surface, something old and familiar.
By Craig Jenkins
vulture lists 1:32 p.m.
5 TV Comedies You Can Safely Recommend to Your Parents They’ll tell you how nice these shows are at your next FaceTime.
scary 1:23 p.m.
Adele’s ‘Easy On Me’ Is a Song About Her Poltergeist Many people, including Adele, are saying that her new song, “Easy On Me,” is about her divorce. Unfortunately, it is about a vengeful demon.
between friends 1:03 p.m.
All the Things That Went Unsaid During the Making of Bergman Island Mia Hansen-Løve and Vicky Krieps on motherhood, the bad-dad allure of Ingmar Bergman, and their unspoken connection.
vulture sports 1:01 p.m.
You’ll Love How Much the Red Sox Love ‘Dancing on My Own’ “Deep down, everybody thinks it’s a little catchy.”
movie review 1:00 p.m.
Halloween Kills Is Afraid of Itself It wants to be a gonzo send-up and a social-message movie at the same time. It winds up being neither.
my mixtape is dropping 12:39 p.m.
Add PinkPantheress’s Debut Mixtape to Your MySpace Profile Or just stream To Hell With It now.
More Stories