When The Good Wife wraps up its run on May 8, we faithful viewers will miss many things: Julianna Margulies’ parade of increasingly iffy wigs; rare Zach Florrick spottings; catching Alan Cumming’s real accent; Matt Czuchry. As a fan since the first episode, what I’ll miss most — besides, of course, the high-quality television that manages to be both soapy and feminist — is looking forward to what Diane Lockhart (the great Christine Baranski) is wearing, a stunning parade of power suits, chunky necklaces, and animal prints. Let’s look back at her style, season by season, and praise costume designer Daniel Lawson’s killer instincts. 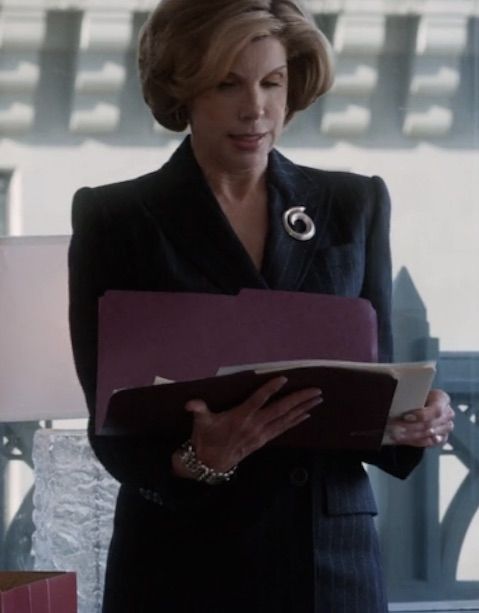 This is the first time we meet Diane and it is … not great. I mean, sure, she looked fine, like the manager of a Poughkeepsie Citibank who bought one nice suit in the early 1990s and stuck with it. But she’s Diane Lockhart, partner of one of the best law firms in Chicago. She can do better. 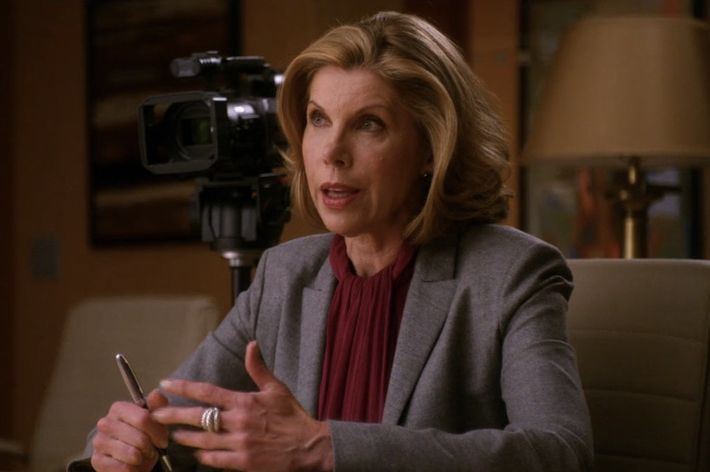 Thank goodness, by the end of the season, she does. She’s still in a gray suit, but with a stunning red blouse (that collar!) that’s soft, drapey, and fetching. 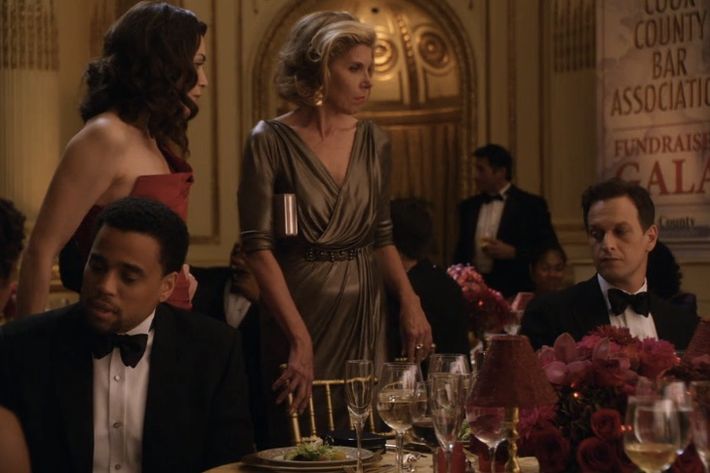 Diane kind of disappears in season two. Of course, she’s there (Baranski is in every episode) but mostly to look askance at Will and Alicia’s shenanigans when she’s not holding a meeting in the conference room. But we Diane-watchers do get this stunning dress, worn at a fund-raiser for Peter’s campaign for governor. 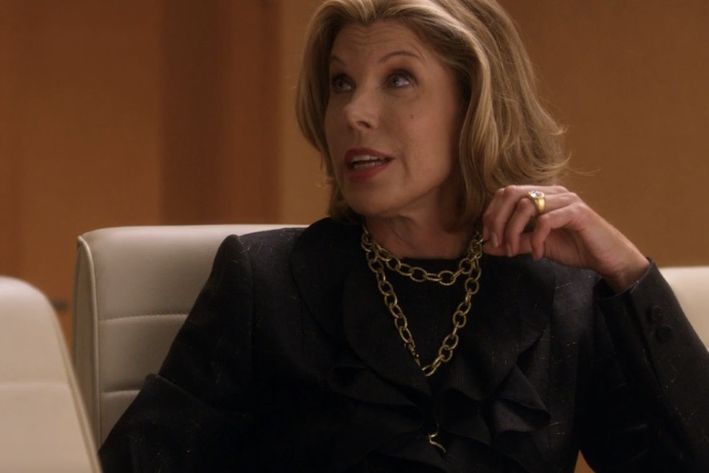 Diane’s neckwear has always been a particular joy, especially her decorative chains, which range from chunky to tastefully delicate. I like to think that the larger the chain, the freer she flies. 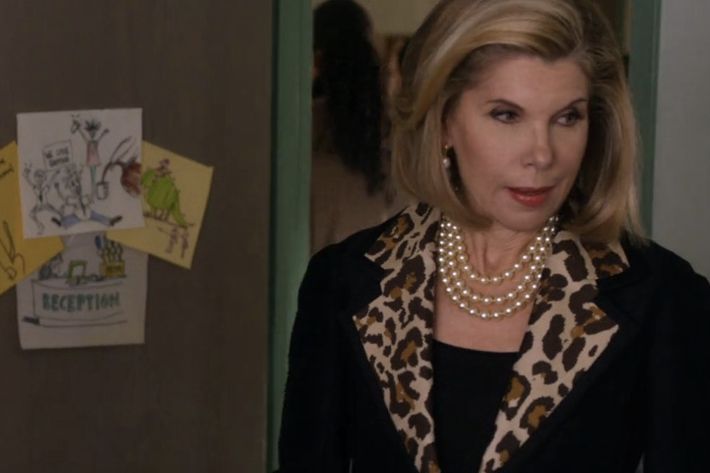 This ain’t great, unless she’s working on getting financing for a musical. 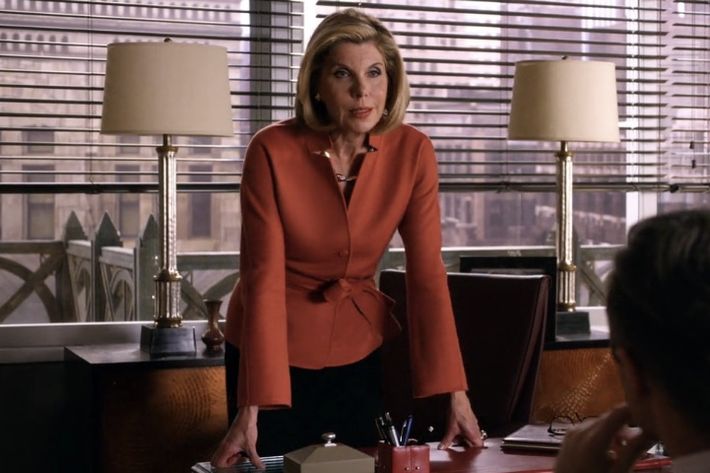 Now here is my favorite Diane Lockhart look: classic, a little offbeat, with a tie-belt, and dead elegant. 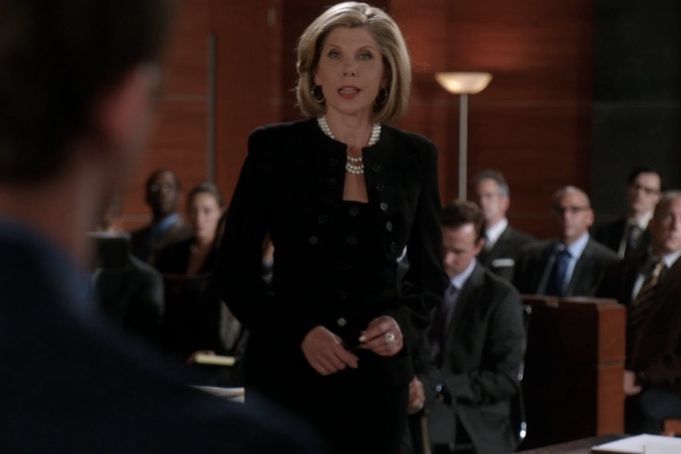 Season four features one of Diane Lockhart’s snazziest outfits: a little black suit that’s got buttons as trim on the bolero jacket as well as on the dress. I am very pro an outfit that goes from the courtroom to an amateur, all-female production of The Pirates of Penzance. 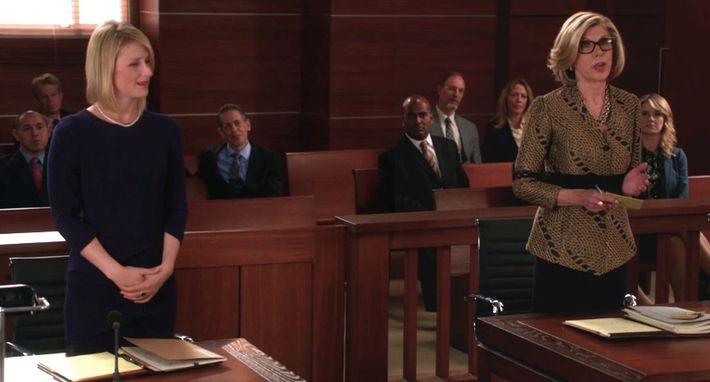 Trademark glasses, a perfectly tailored blazer in an unusual print, and chains — this is Ur-Diane. 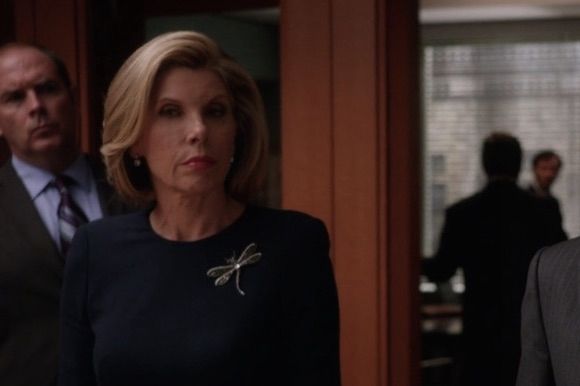 Lawson has said that Diane owns over 30 brooches — this dragonfly is the closest to my heart. 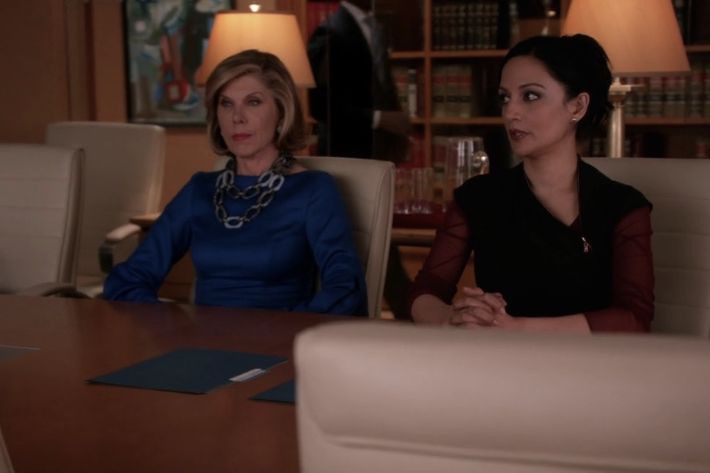 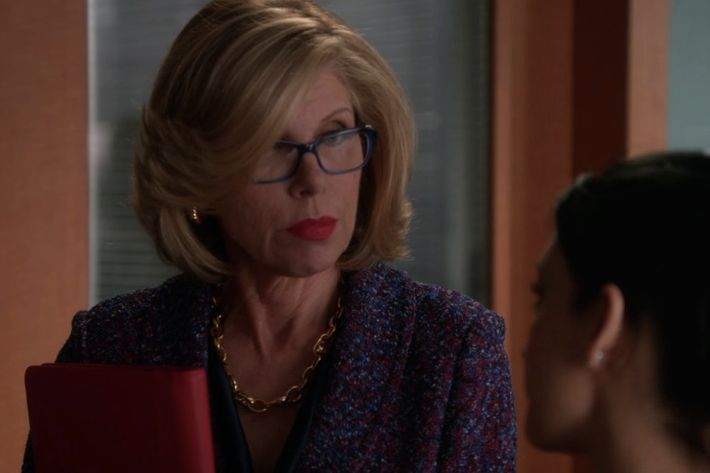 The chains are off the charts in season six, which makes sense if you recall that Diane’s plot lines essentially consisted of kicking ass, over and over. 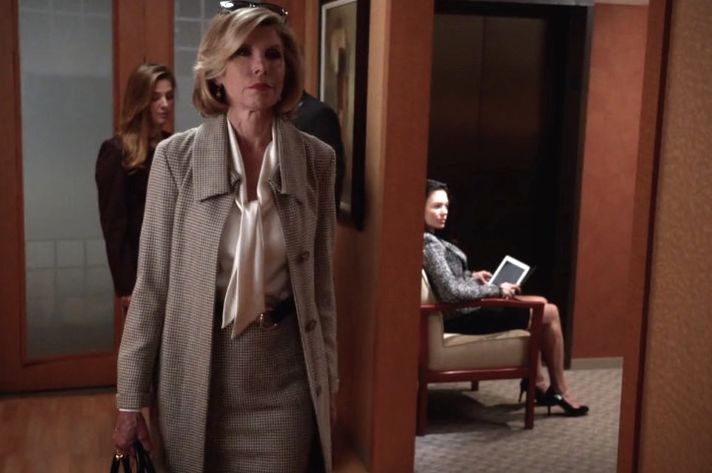 This is one of Lawson’s top-five outfits for Diane, worn when she returns to the law firm to ask David Lee a favor. It’s an exquisite, effortlessly chic look, and Baranski wears it so well. 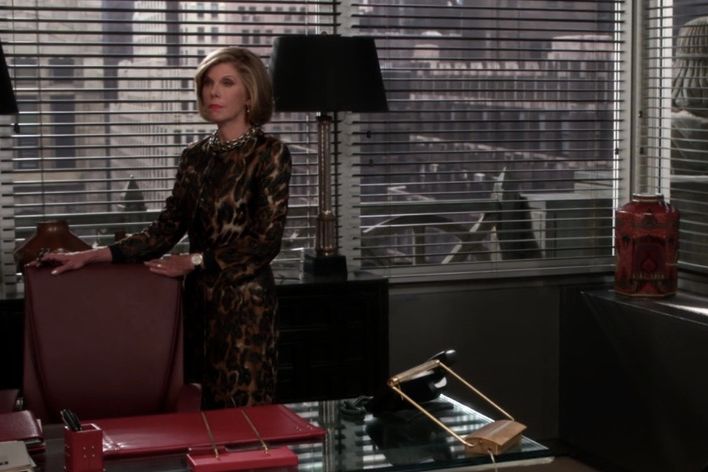 And, on that note, only Lockhart/Baranski could wear this ridiculous coat dress — which would better fit in at the the Soap Opera Awards Nominee Luncheon — with so much poise and grace.

And so we come to the end of the road, Diane Lockhart, you beautiful creature. Somebody give this woman a spinoff. 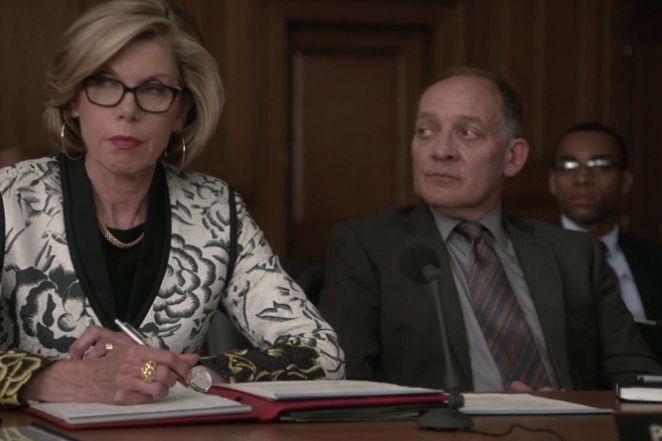 vulture 10x10 12:31 p.m.
The K-Horror Puzzle 12-Across, Three Letters: Chihuahua who could use some therapy.
late night 12:30 p.m.
The Daily Show Will Feature Guest Hosts Until Fall 2023 Including Leslie Jones, Al Franken, Chelsea Handler, Sarah Silverman, and Hasan Minhaj.
herbie fully loaded 12:17 p.m.
Fred Armisen Wants to Host the Oscars for Cars Bip bip.
vulture lists 12:00 p.m.
The Best Books of 2022 Yes, this list features more than one book set in a postapocalyptic world, but have you looked around lately?
respect the classics 11:37 a.m.
Neil Diamond Gives Us One Last Performance and It’s So Good, So Good The singer-songwriter, who’s living with Parkinson’s disease, had a surprise for his musical’s opening night.
collaboration 11:02 a.m.
Henry Koperski Waves Good-bye to Musical Comedy “If someone wants to write a big check for me to write more musical comedy I will, but it’s no longer something that comes from my heart.”
best of 2022 11:00 a.m.
The Best Podcasts of 2022 Forget the celebrity brand extensions. The art of podcasting is still as vibrant as ever.
karma's a relaxing thought 10:42 a.m.
Everything We Know About the Swiftie-Ticketmaster Lawsuit An attorney said more than 200 other potential plaintiffs have reached out since Friday.
best of 2022 10:29 a.m.
In 2022, Good TV Was a Gut Feeling Our critics break down what goes into naming the best of the year.
By Jen Chaney, Roxana Hadadi, and Kathryn VanArendonk
trailer mix 9:00 a.m.
Billie Piper Attempts a Comeback in the Trailer for I Hate Suzie Too The “anti-Christmas special” premieres on HBO Max December 22.
season's beatings 9:00 a.m.
Violent Night Was an Idea ‘Just Stupid Enough’ to Exist The guys behind the R-rated holiday shoot-’em-up still sound incredulous — not only that it overperformed but that it reached the screen at all.
By Chris Lee
gift guide 8:00 a.m.
Vulture’s 2022 Holiday Gift Guide Gifts for cinephiles, Industry stans, and Swifties who already have all the official merch.
overnights 8:00 a.m.
Welcome to Chippendales Recap: The Godfather IV The Chippendales’ expansion and Steve’s antagonism splinter the group further.
overnights 12:12 a.m.
His Dark Materials Season-Premiere Recap: Death Is Going to Die After a two-year wait, Asriel’s megalomaniacal campaign kinda … hits different.
last night on late night Yesterday at 11:53 p.m.
Teresa Giudice Says She Got Super-Close With Shangela (But Can’t Say Her Name) Or Shen Angela, as she kept saying.
overnights Yesterday at 11:01 p.m.
His Dark Materials Recap: Your Strength, My Guile Coulter loses at chess, Asriel does an enhanced interrogation, and Mary Malone plays an adventure RPG.
overnights Yesterday at 9:00 p.m.
Below Deck Recap: Seasick Is Camille the laziest worker to ever walk the deck?
obits Yesterday at 8:47 p.m.
Kirstie Alley, Cheers and Drop Dead Gorgeous Star, Dead at 71 She led two hit sitcoms, Cheers and Veronica’s Closet.
cancellations Yesterday at 8:27 p.m.
HBO Max Ghosts FBoy Island After two seasons of the Nikki Glaser–hosted show.
timelines Yesterday at 7:31 p.m.
The Complete History of Ezra Miller’s Controversial Career From kidnapping allegations to pleading not guilty to felony charges to the DCEU’s master plan.
More Stories