Spoilers for the most recent episode of Outlander and the book series ahead.

Outlander production designer Jon Gary Steele doesn’t usually have time to hang around the shoots on the sets he designs, but he made an exception this season for King Louis XV’s Star Chamber. “I wanted to be there when everyone first walked in,” he told Vulture. “It’s fun to see the joy they got out of it, because they were all like, ‘Oh my God! This is awesome! This is so cool!’”

“The floor looked like the most beautiful polished marble,” marveled actress Caitriona Balfe. “You feel like it should be echoing for hours.”

As soon as the king takes Claire to the hidden passageway and walks her through the double doors, you get the sense that this is no ordinary room in the palace, but one of mystery and wonder. While it’s a known fact of history that King Louis XV was fascinated by witchcraft and dabbled in the occult, there’s no historical record of him having a Star Chamber. It was up to Steele and his colleague, set decorator Gina Cromwell, to imagine what such a room might look like, starting with the brief description in Gabaldon’s novel, Dragonfly in Amber. There, she writes that the room was “quite dark, lit only by numerous tiny oil-lamps, set in groups of five in alcoves in the wall of the chamber.” The room is round, the ceiling is gilded, and two pentagrams are drawn on the flowered carpet. From that, and the research he did, Steele decided he wanted the Star Chamber to be a dome, with shafts of light piercing through it “so the light is on Claire.” He made sketches and then a model of it for showrunner Ron D. Moore. “He was like, ‘You want to do what? How  does it work?’” Steele recalled. “And finally he said, ‘I love it. Build it.’” 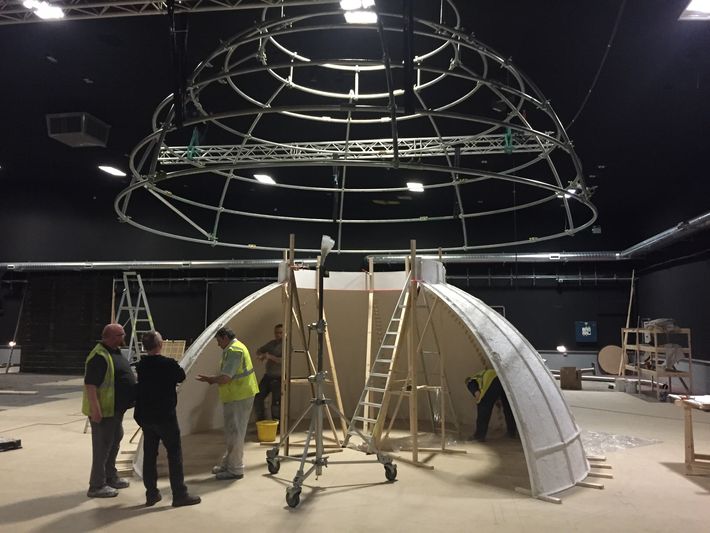 They formed the dome with plaster and divided it into 12 sections so they could assemble it one chunk at a time, “like a slice of cake,” Steele said. Each piece was rigged to a wire frame and hoisted up to a grid on the ceiling, attaching it “like an umbrella in reverse.” A camera was put above the circle at the top, where it’s supposed to seem as if it opens to the sky, and the ceiling was painted blue. To make the starlight shine through, Steele climbed up on a ladder and put Post-it notes everywhere he wanted the carpenters to drill a hole. “At one point, Ron asked if we were going to make the stars in the form of constellations, like the Big Dipper,” Steele said. “If we had a lot more money and time, it would be!” 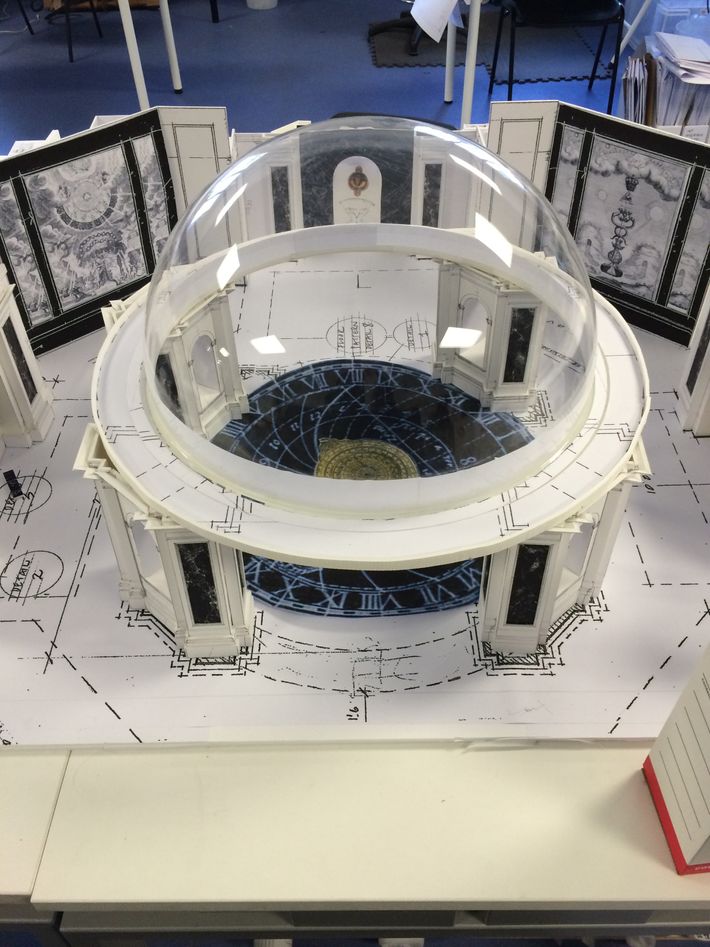 The floor was trickier. Steele wanted it to look like marble, so they printed it on canvas. The bronze-looking inlays are meant to mimic an astronomical astrolabe tool, “with dials that spin.” This one doesn’t spin, but the cut-out layers give it enough depth so it appears as if it could. “Everything’s fake,” Steele laughed. “Nothing is real!” Around the astrolabe are both Roman numerals and astrological symbols.

During the 18th century, Freemason ceremonies often featured giant candlesticks sitting on the floor, so Steele wanted a variation on that. “I told Ron, ‘I want to build torches and place them around the premises,’” he said. The torches became bowls of fire, scattered around on tripods. To represent another elements — water — Steele wanted water fountains, and he based the design in the Star Chamber on ones that actually existed at Versailles, “in either the Grand Trianon or the Petit Trianon.” “It’s an exact copy,” he said. “We saw those and went, ‘Oh my God, that’s awesome.’” The fountainhead is a ram’s head coming out of the wall, the basin is a shell, and two sculpted dolphins hold up the basin, even if you can’t see it clearly on camera.

In each of the four alcoves, a black-and-white wood etching from the 16th century has been blown up, each representing something mystical or magical. The most clear of these is on the double doors, which feature symbols from alchemy and sacred geometry. How to decipher the double doors? You might mistake one symbol to be something we often see representing the medical profession — sometimes represented as one snake or two. Steele clarified that the image is actually of two dragons, with their necks intertwined, sitting on an eyeball. The dragons’ heads are each pointed towards a sun and moon symbol, with a less-obvious symbol in between — a triangle with a cross beneath it — that stands for the soul. What the combination means, and why the king would have that on his door, is up for interpretation. “It’s all very pagan,” Steele said. “It’s probably one of the more out-there things we’ve done.”

actors on actors 19 mins ago
Bradley Cooper ‘Didn’t Give Up On Acting’ Thanks to Paul Thomas Anderson Even hot, talented people have doubts!
theater review Yesterday at 10:52 p.m.
A Speed Date With Long Day’s Journey Into Night Cut from three and a half hours to two, and TB traded for COVID.
overnights Yesterday at 10:01 p.m.
This Is Us Recap: Jack’s Mom In what may be the last stand-alone Jack episode, Milo Ventimiglia has never been better.
lightning strikes Yesterday at 9:52 p.m.
Percy Jackson’s Author Blesses Disney+ Adaption: ‘We’re in Great Hands’ Percy Jackson and the Olympians has been picked up to series.
lawrence hive Yesterday at 7:35 p.m.
Who Slapped Jay Ellis in an Airport? Drop your location, we just wanna talk.
drew's news Yesterday at 6:17 p.m.
Drew Barrymore Refuses to Kink-Shame Megan Fox and MGK Barrymore likes that he got Fox an engagement ring with thorns that hurt if she takes it off.
remakes Yesterday at 5:00 p.m.
Disney’s Live-Action Snow White ‘Makes No Sense’ to Peter Dinklage “You’re progressive in one way, but you’re still making that fucking backwards story of seven dwarfs living in a cave together.”
switched on pop Yesterday at 4:20 p.m.
Elvis Costello’s Aim Remains True, 32 Albums In  Plus, riffs on everything from Olivia Rodrigo’s songs being “how rock and roll works” to passing on a chance to write for Adele.
comedy review Yesterday at 4:16 p.m.
Aziz Ansari’s Empty Authenticity If at any point his material reached for the same goals as the look of the special, Nightclub Comedian might be a different experience.
the videodome Yesterday at 3:35 p.m.
Are You ‘Curious’ About Franz Ferdinand’s New Track? They even do an avant-garde hoedown.
food glorious food Yesterday at 3:17 p.m.
How The Gilded Age Prepares Its Sumptuous Feasts Yes, those are all real lobsters.
overnights Yesterday at 3:10 p.m.
The Bachelor Recap: Let Clayton Himbo Not even Shrimpgate can slow down Shanae.
academia Yesterday at 2:29 p.m.
4 Hours, 12 Panelists, One Baby: Inside the Inaugural Boss Baby Symposium The virtual event went surprisingly deep on the film it called “thematically richer than the Bible and more confusing than Ulysses.”
By Chloe Lizotte
this! is! a fun quiz! Yesterday at 2:15 p.m.
Can You Answer the Jeopardy! Clues Amy Schneider Couldn’t? Probably not! Well, maybe. Why don’t you try and see?
By Devon Ivie
hype house Yesterday at 2:12 p.m.
The Hype House Allegations That Didn’t Make It Onto Netflix The story is, of course, unfolding across social media.
racism Yesterday at 1:41 p.m.
Bravo Fires Jennie Nguyen from The Real Housewives of Salt Lake City “We recognize we failed to take appropriate action once her offensive social media posts were brought to our attention.”
last night on late night Yesterday at 12:18 p.m.
Lady Gaga ‘Never Met’ Jared Leto While Filming House of Gucci “I was always with Paolo; he was always with Patrizia.”
role call Yesterday at 12:00 p.m.
Julie Delpy Answers Every Question We Have About 2 Days in Paris On tricking studio executives into making movies, dodging the word “crazy” throughout her career, and why she thinks she might be Larry David.
By Rachel Handler
vulture 10x10 Yesterday at 12:00 p.m.
The EGOT Puzzle 12-Across: The Peter ___ (because “Spidey sense” is so 2002).
last night on late night Yesterday at 11:43 a.m.
Paris Hilton and Jimmy Fallon Go Ape for Print Outs of NFTs A physical copy of a jpeg that Hilton owns (a link to).
More Stories