When Ryan North — the writer behind Marvel’s The Unbeatable Squirrel Girl and the Adventure Time books — was in ninth grade, he read his first Shakespeare play: Romeo and Juliet. He wasn’t impressed. His problem was with the ending: “I found it really frustrating,” North says. “I always thought that if Romeo just waited for five minutes, if he stopped to pick up some flowers or something, he’d show up, Juliet would be awake, and you’d get a happy ending. You just want to shake Romeo and be like, Clearly she’s not dead! Just wait five minutes and it’ll be fine, I promise.”

In his new book Romeo and/or Juliet, readers can do just that. The sequel to North’s first Kickstarter-funded choose-your-own-path Shakespeare book To Be or Not to Be, Romeo and/or Juliet honors the heart of the Bard’s tale of star-crossed lovers while providing hundreds of alternate endings. North recently spoke to Vulture about writing a 1,100-page choose-your-own-path book, how Shakespeare is like a video game, and why he made Juliet a bodybuilder.

This book has hundreds of endings and even more plot lines. How do you even begin to write something like this?
You know in movies where you find out someone’s crazy, and the way you know is because they have a wall covered with pieces of paper and string? That’s basically how they were written: insane walls of story elements attached by pieces of string. But I use a computer, and it’s way easier. I create boxes that are story points in the book, and I can draw lines between those boxes. It gives you the kind of free movement you get in video games, but you’re doing it in a book.

The way you describe it sounds a lot like a video game.
I have this theory of video games versus books, and the difference is that in a video game you can make a lot of small choices, but usually your story line is kind of set. And in a book like this you’re choosing what happens and you don’t get to make any of the small choices, but you get to make big choices, and that’s how all the crazy stuff happens. I was a kid who grew up playing more video games than reading books, so I try to capture that sense of fun, the sense of exploration, the sense of being in control of a character’s destiny and deciding what happens next. I always want the choices to make sense and to be consequential.

What do you mean by that?
I remember reading a book as a kid where you had the choice to sit in a chair or not sit in a chair. And if you sit in the chair, the Earth exploded! And if you didn’t sit in the chair, aliens invaded! But your choice had nothing to do with the outcome. In this book you’ll have a conversation with Juliet, and then you can decide whether you want to destroy the planet — which is always an option.

You commissioned more than 100 artists for this book. What was it like to work with so many talented and awesome people?
I wanted each artist to do what they wanted with the material I’d given them, and it was a thrill to see the pictures come back. The secret is that writing comics is easy and drawing is the hard part — one of the greatest parts of doing comics is seeing something you wrote come back better than you had imagined when you wrote it.

Considering how much time this took, how do you come to terms with the fact that not everyone is going to read every plot line?
I feel like it makes it easier because when you’re writing a straight book you’re thinking, ‘This is my one shot, so I need to make this one story work.’ But when you’re writing a book that has a hundred endings to it, you have the chance to take risks and put stuff in that you might not otherwise.

Of course, hardly anyone writes a book with a hundred possible endings.
I think culturally it’s seen as a more juvenile way of telling a story. Not many people use second person — they use the much more proper and adult first and third person — and a story in which the reader makes the choices feels less authentic to a lot of people. But just because you give the reader a choice doesn’t mean it’s an easier book. 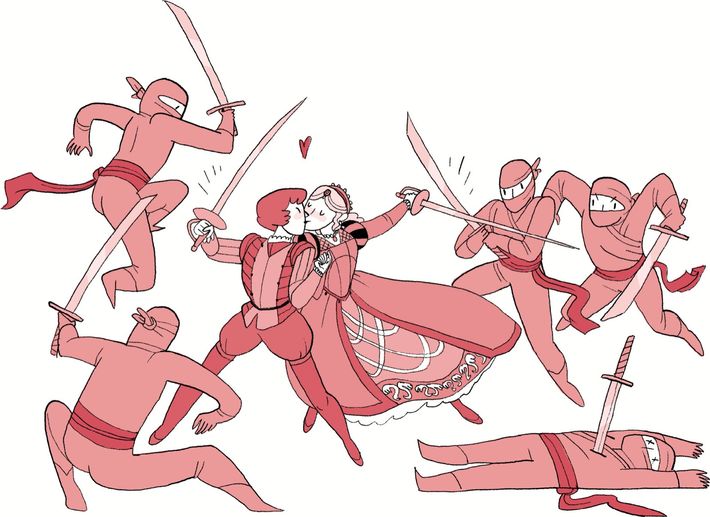 I like that you made Juliet a little more sympathetic — and a teenage bodybuilder who guzzles protein shakes.
I spent a lot of time thinking: What’s it like to be a teenage girl? She’s been controlled by her parents her whole life, and Romeo isn’t just the first guy she likes — she also sees him as her gateway to everything the world has to offer. And I’d never seen a Juliet who was ripped before, so I thought it’d be fun.

Yes, it’s a bit of a departure from canon. Speaking of which, did you have to become a Shakespeare scholar to write this?
A little bit. I read all I could about the play and about the critical theory of the play and about how it’s evolved over the past 400 years, and I put in a couple jokes that I’d hope someone who’s a true Shakespeare scholar would appreciate. You need to make sure you know the text and you know what the person is doing and what motivates them. That way you don’t make mistakes. You do not want to make mistakes with Shakespeare.

album review 6 mins ago
Megan Thee Stallion Takes Control of Her News Cycle Traumazine is a reminder there’s a human on the other side of the headlines.
vulture 10x10 12 mins ago
The True Love Puzzle 15-Down, Five Letters: Housing type for Frasier Crane.
coming soon 21 mins ago
Succumb to The Lord of the Rings: The Rings of Power Daddy Bezos wants your sweet, sweet attention come September 2.
search for a superstar 11:20 a.m.
The Kelly Clarkson Show Is Doing American Idol for Kellyoke There’s no golden ticket to Hollywood on the line, but you could get featured on the new season.
the need for rewatches 11:08 a.m.
Top Gun: Maverick Finally Flies Onto Digital in a Week But you’ll have to wait a bit for a physical release.
overnights 10:33 a.m.
The Bachelorette Recap: Finally, Man Tears The men have discovered therapy, and they’re not afraid to use it.
last night on late night 10:03 a.m.
Desus Nice Talks About Being Fired by Showtime While Subbing for Kimmel Yerrr, you know what it is, a completely different show on late night.
best of 2022 9:44 a.m.
The Best Horror Novels of 2022 (So Far) In the mood for some transgressive splatterpunk?
superlatives 8:00 a.m.
The Most Seductive and Poetic of Roxy Music, According to Bryan Ferry “We didn’t want to be a one-trick pony.”
By Devon Ivie
overnights 1:07 a.m.
Better Call Saul Series-Finale Recap: The Time Machine Jimmy McGill returns to square up to what he’s done and earn redemption from the person who matters most.
timelines 1:00 a.m.
The Complete History of Ezra Miller’s Controversial Career From kidnapping allegations to felony charges to a new film premiering at TIFF.
dce-who? 12:39 a.m.
Ezra Miller Is Being Treated for ‘Complex Mental Health Issues’ “I want to apologize to everyone that I have alarmed and upset with my past behavior,” The Flash star said in a new statement.
shootings Yesterday at 11:55 p.m.
A$AP Rocky Charged With Felony Assault with a Firearm In connection to a Hollywood shooting in November of last year.
spoilers Yesterday at 11:17 p.m.
Let’s Talk About the End of Better Call Saul As it turns out, the Breaking Bad prequel turned sequel is also TV’s best time-travel show.
oz-ish Yesterday at 11:04 p.m.
Kenya Barris Is Off to See the (Reimagined) Wizard of Oz The Black-ish creator will write and direct a new take on the 1939 musical movie.
overnights Yesterday at 10:00 p.m.
Industry Recap: Execute This week, Harper and Jesse star in a high-stakes comedy of errors in Wales.
overnights Yesterday at 9:30 p.m.
Below Deck Mediterranean Recap: Courtney’s Ready to Twerk After the drama from last week, Natasha goes AWOL and gets on Kyle and Natalya’s nerves.
birthday presents Yesterday at 8:34 p.m.
Nipsey Hussle Has Been Posthumously Honored With a Hollywood Walk of Fame Star The ceremony took place on what would’ve been his 37th birthday.
tweet tweet Yesterday at 6:42 p.m.
Viola Davis Will Be the Head Honcho of the Hunger Games Prequel She’ll star in The Ballad of Songbirds and Snakes as Dr. Volumnia Gaul.
breakups Yesterday at 6:27 p.m.
Michelle Branch Files to Divorce the Black Keys’ Patrick Carney She took the step a day after announcing their split online.
More Stories