You won’t have to run around NYC to see him this time. Photo: Dave Kotinsky/Getty Images

If your festival’s Kanye Day gets rained out, it’s cool, just create a whole new festival to make up for it. That is exactly what the organizers behind Governors Ball have done, announcing today the inaugural Meadows Music and Arts Festival to be headlined by Kanye West and the Weeknd in October. It becomes the latest addition to the New York City festival family, after the people behind Coachella encroached on Gov Ball’s territory with the creation of Panorama Fest. Instead of the overused Randalls Island, Meadows Fest will be held in Queens at Citi Field and Flushing Meadows Corona Park. It will also be the city’s newest fall music festival, held on October 1 and 2 (the same weekend as the Roots’ inaugural New York City festival at Bryant Park). But don’t worry, Mets fans with big October dreams — they’re in Philly that weekend.

“The booking of Kanye West was born out of his weather-related cancelled appearance at Governors Ball 2016,” the organizers said. “Founders Entertainment saw a booking for West at the new the Meadows Music and Arts Festival as a way to follow through on bringing him to New York City for his only North American festival appearance in 2016.” Chance the Rapper, Kygo, the 1975, Grimes, Bryson Tiller, Pusha T, Empire of the Sun, and dozens more are also set to play. (See the full lineup below.)

Update, September 22: After a slight scheduling conflict, the Weeknd is back on the Meadows Fest lineup! The festival had previously announced that he had to drop out — to perform on the SNL premiere, as we later learned — but it turns out, he’ll just be there at an earlier time. J. Cole is the replacement Saturday headliner; as of now, Kanye West is still your Sunday headliner. Got it? Phew. 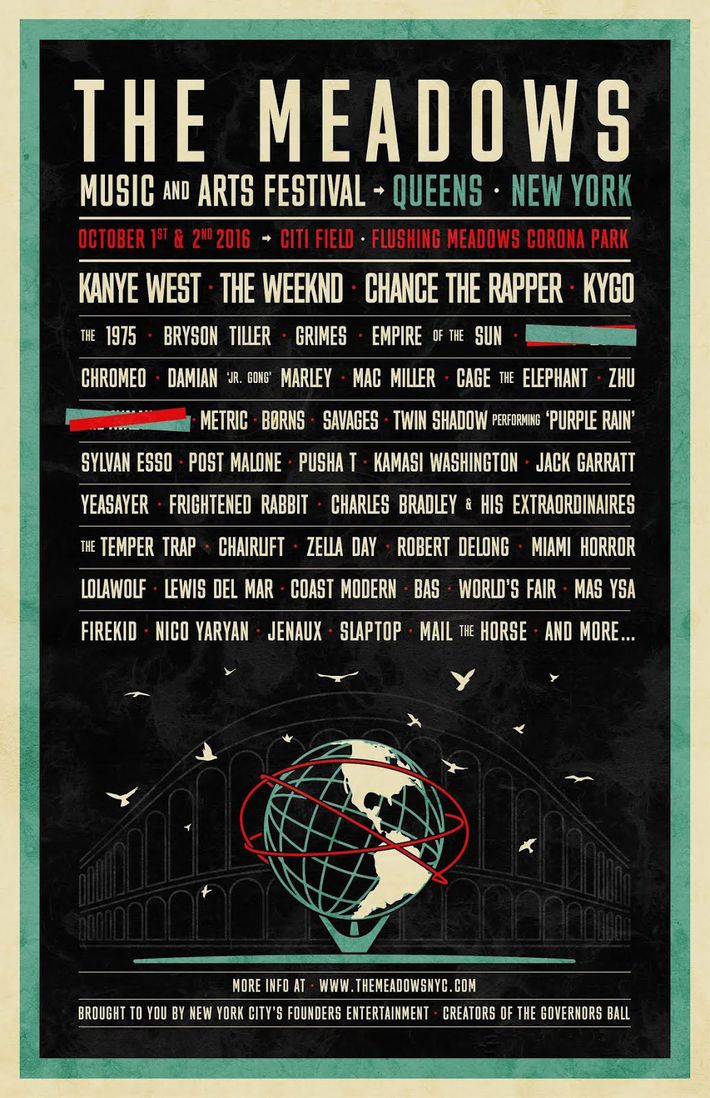 don't get your pooh on shein 1:19 p.m.
Public-Domain Winnie the Pooh Stars in New Slasher Film It’s a rather murder-y day.
summer preview 1:00 p.m.
36 Albums We Can’t Wait to Hear This Summer From Lizzo to Maggie Rogers.
By Michelle Hyun Kim
summer preview 1:00 p.m.
44 TV Shows We Can’t Wait to See This Summer It’s blockbuster season in TV Land.
By Vulture Editors
obits 12:52 p.m.
Ray Liotta, Crime-Drama Boss, Dead at 67 The Goodfellas star reportedly died in his sleep.
crime 12:37 p.m.
Kevin Spacey Charged With 4 Sexual Assault Counts in U.K. The charges came down while he was in a New York courtroom for a separate sex-abuse case.
vulture 10x10 12:00 p.m.
The Solo Puzzle 15-Across, Five Letters: Much-admired celebrities.
vulture recommends 11:03 a.m.
Jack Reacher Was the Beginning of a Beautiful Blockbuster Friendship Tom Cruise broke Christopher McQuarrie out of “director jail” and found a kindred creative spirit.
overnights 11:00 a.m.
Under the Banner of Heaven Recap: Heavenly Father Resides in Them Allen Lafferty’s story is one of tragic failure.
cannes 2022 10:44 a.m.
In Elvis, There’s No Business Like Baz-ness Why have only one montage when you can edit another montage inside that montage?
By Nate Jones
overnights 10:30 a.m.
Hacks Recap: Sexual Awakening Hacks’ Rocky training montage episode is here, and she’s perfect.
overnights 10:00 a.m.
The Kardashians Recap: Cover Girls The glamorous life leaves the Kardashians wanting more.
'and it's all true...' 10:00 a.m.
Where Does the Abortion Thriller Go From Here? Movies like Happening turn the terrible consequences of restricted access into the stuff of dramatic tension. Are they trying to do the impossible?
By Alison Willmore
theater 9:51 a.m.
Encores!’s Into the Woods Will Have an Encore on Broadway Sara Bareilles’s Baker’s Wife will return, alongside some newcomers.
overnights 9:30 a.m.
Hacks Recap: Girlbosses Go to the Fair A warmer, fuzzier episode explores Deborah’s regrets about choosing her career over everything (and everyone) else.
appreciations 9:30 a.m.
The Standard-Setting Beauty of Live in Crenshaw Lil Rel Howery’s 2019 stand-up special shows that when a special looks distinctive, the comedy feels that way too.
By Kathryn VanArendonk
overnights 9:00 a.m.
The Flight Attendant Season-Finale Recap: Suspicious Minds Despite the chaotic pace and occasionally incomprehensible narrative, Cassie’s journey had an emotional core that kept us coming back for more.
summer preview 9:00 a.m.
20 Movies We Can’t Wait to See This Summer From a new Cronenberg body horror to a stealth Predator sequel to Marcel the Shell With Shoes On.
By Vulture Editors
overnights 12:44 a.m.
Survivor Season-Finale Recap: A Weird, Wonderful Ending The finale provides a feel-good ending to a stellar season of Survivor.
last night on late night 12:37 a.m.
The Tonight Show: Jon Hamm Always Commits to the Bit From “Hamm & Bublé” to this Tonight Show clip.
overnights Yesterday at 10:45 p.m.
The Real Housewives of Beverly Hills Recap: The Dark Crystal Crystal is at her breaking point.
More Stories