The problem: “We wrote this stream-of-consciousness song,” says Bloom, “where my character’s enemy, Valencia, talks about how women have to compete to get the best sperm. It was too obvious.”

The fix: The spirit of Valencia’s musical number was changed from negative to positive. “She doesn’t tell herself ‘I hate other women.’ She tells herself ‘I love other women’ — because a villain does not think they’re a villain.”

The final version: “Women Gotta Stick Together,” a goofily sincere ballad. “It’s this hippie-dippie female-empowerment song, but the joke is that everything she says is disempowering. She’s singing with a big smile on her face, but what she’s saying is terrible: ‘It’s my duty to tell this girl that she’s fat.’ The contrast made it work.” 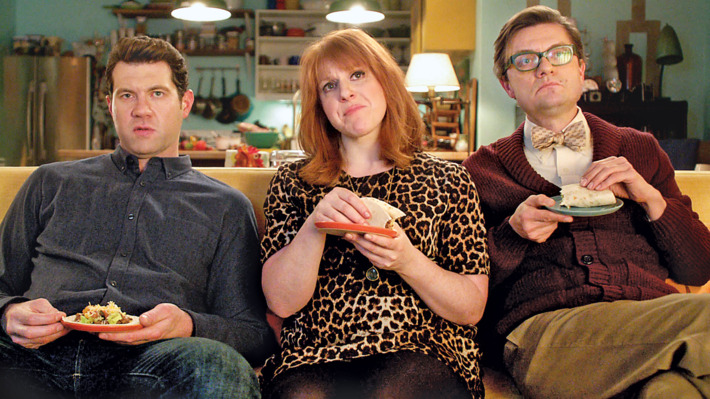 The problem: “Originally,” says Klausner, “my character told [co-star] Billy Eichner’s character, ‘Do impressions of all of Lorne Michaels’s best friends.’ Just be like, ‘Oh, I’m Steve Martin,’ and pretend to shit in your own hand and eat it.” But the joke just wasn’t working.

The fix: The audition was relegated to an offscreen aside. “We kept running into a problem with Billy sabotaging himself, and we figured out he doesn’t have to. Billy and Julie live in a world that gets in their way. The characters are not crazy — it’s the world around them that’s garbage.”

The final version: Billy tells Julie the unseen audition went well but that he didn’t get the job because he’s “pretty green.” It’s later revealed that the show’s cast is entirely made up of children. “If Difficult People takes place in a world where SNL casts 5-year-olds, then it’s a really unfair world. It’s so funny.”

The bit: A parody of “The Most Dangerous Game.”

The problem: “We don’t do specific genre parody that often,” says Cross about the initial humans-hunting-humans effort. “We’d normally find some way to spin it. But it didn’t grow.”

The fix: “The sketch clicked,” Cross explains, “when the hunter wasn’t just giving an advantage to his prey but also debasing himself in the process.”

The final version: The hunter’s method for leveling the playing field becomes increasingly absurd: from drinking cough syrup to putting scorpions on his face. “It played so well,” says Odenkirk. “You could imagine it having been done in vaudeville.”

my single is dropping 13 mins ago
The Weeknd Gets Spooky and Sad on New Single ‘After Hours’ The title track off his new album.
engagements Yesterday at 11:58 p.m.
Jenna Dewan and Steve Kazee are Engaged With a Baby on the Way He flirty danced his way into her heart.
overnights Yesterday at 10:01 p.m.
This Is Us Recap: Big Three, One Cabin There’s no way for Randall, Kevin, and Kate to escape each other at the family cabin, and that is a very, very good thing.
overnights Yesterday at 10:00 p.m.
Vanderpump Rules Recap: The Princess Bride I can’t even keep track of the number of sashes, headpieces, and white dresses Brittany’s worn at this point, and her wedding’s still two weeks away.
overnights Yesterday at 9:31 p.m.
Schitt’s Creek Recap: Perfect Pairing Wine tasting, fitness cults, tearful heart-to-hearts — please stay hydrated out there, Roses!
rip Yesterday at 9:21 p.m.
Zoe Caldwell, Four-Time Tony Winner, Dead at 86 The veteran actress suffered from Parkinson’s disease.
the law Yesterday at 6:40 p.m.
Weinstein Jury Needed Written Explanation of Charges The jury sent its first note less than an hour into deliberations.
pilots Yesterday at 6:28 p.m.
Nathan Fielder + the Safdie Brothers = Your New Favorite TV Show This pilot has everything: Fielder, the Safdies, HGTV, and a curse.
britposting Yesterday at 6:08 p.m.
Billie Eilish Performs Bond Theme at the BRIT Awards With Hans Zimmer She also won the Best International Female Solo Artist award.
britposting Yesterday at 5:55 p.m.
Harry Styles Floods the Stage During Emotional Performance at the BRIT Awards Watch Harry Styles perform “Falling” from Fine Line.
britposting Yesterday at 5:50 p.m.
Lizzo’s BRIT Awards Medley Has Us Dreaming of a Lizzo Pop Opera A Lizzopera?
respect the classics Yesterday at 5:42 p.m.
Joni Mitchell Is Making New Music Again, According to James Taylor Should we believe him?
fact check Yesterday at 5:00 p.m.
Bong Joon Ho’s Translator, Sharon Choi, Isn’t Writing a Film About Awards Season But she did get to eat Taco Bell at 4 a.m. with Céline Sciamma.
art du jour Yesterday at 4:48 p.m.
Ben Affleck Breaks His Silence on Lying About His Back Tattoo “It felt invasive.”
painless shopping Yesterday at 4:35 p.m.
24 Spring-Cleaning Products From Shark Tank Everything from a 50-foot broom to a portable shower.
By Lauren Schwartzberg and Jenna Milliner-Waddell
mustache news Yesterday at 4:16 p.m.
Farewell to Justin Bieber’s Dreaded Mustache And congrats to Hailey Bieber.
teasers Yesterday at 3:49 p.m.
Ryan Murphy Presents a Very ’70s Ewan McGregor in Halston Teaser With Rory Culkin as Joel Schumacher and Krysta Rodriguez as Liza Minnelli.
yum Yesterday at 3:37 p.m.
Lizzo Arrived at the 2020 Brits Lookin’ Like a Snack Come get a taste of this chocolate.
close reads Yesterday at 3:27 p.m.
Thank God High Fidelity Fixed Rob By casting Zoë Kravitz as its music-savvy lead, the new Hulu adaptation upends the novel’s and the film’s most infuriating gender bias.
trailer mix Yesterday at 3:06 p.m.
Plot Against America Trailer: The Fascism Call Is Coming From Inside the House Based on the book by Philip Roth.
More Stories