As the fifth installment of O.J.: Made in America — airing Saturday night on ESPN — reminds us, O.J. Simpson filmed a reality television show back in 2006, called Juiced. (You may remember a This American Life episode about it, and an essay in Vice written by the “Kato” of the show, Harmon Leon.) Ostensibly it’s a hidden-camera prank show in the style of Punk’d with O.J. Simpson as the prankmaster general. It was supposed to be his big comeback vehicle made during a time when reality television was the Wild West. In it O.J. plays himself, sometimes he plays a version of himself, and more rarely, he plays a character. The pranks are often so ill-conceived that when O.J. utters the show’s tag line, “You’ve been juiced!” it’s unclear, what, in fact, has just happened.

Juiced is closer to an anthropological artifact than it is a coherent TV show — a sizzle reel turned fever dream. And it’s disturbing because it is, without any qualification, a gross, sexist, and racist show made all the more surreal because O.J. Simpson is a willing participant. Take a music video at the end (pictured above) where O.J. Simpson raps “Get Juiced” dressed up as a pimp surrounded by half-naked women. The interstitial clips are sequences of near-naked or topless women caressing themselves to a soft-core soundtrack. Sometimes O.J. is with them, sometimes he’s not. Sometimes he’s accompanied by a little person. This is just one of the bizarre, disorienting moments from a show that is sophomoric in its sensibility and half-baked in its execution. Here are ten other instances:

A homeless O.J. sells bags of oranges for $2. 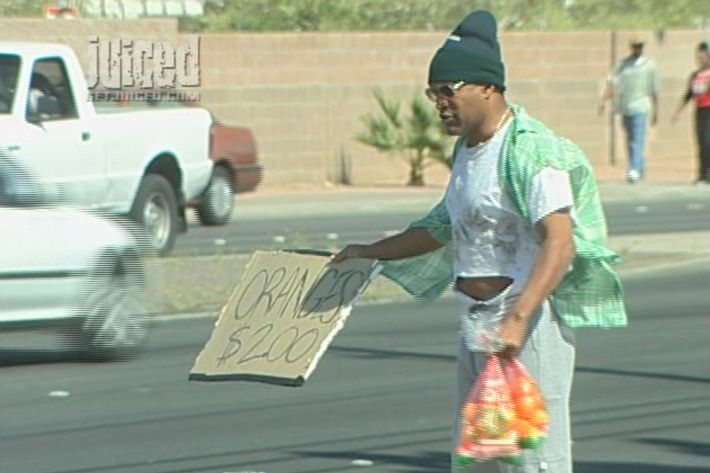 Something you have to understand about these bits is that they can last a minute long at best, with no punch line. In this one, you just see O.J., apparently homeless, selling oranges. He doesn’t even get to utter his tag line, “You’ve been juiced!” because people are trying to get away from him. Perhaps one of the bewildering effects of this image is that there is something inexorably pitiful about it, as though it were a harbinger of what’s to come. 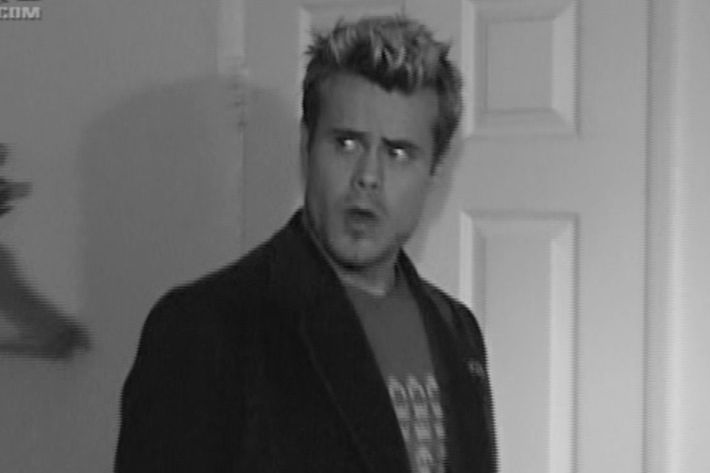 This clip is called “Scandalous” and the set-up is that there is a reality show where an investigator helps this man catch his girlfriend in flagrante. In this case, his girlfriend is supposedly cheating on him with O.J. Simpson. But during the clip, the man doesn’t pay attention to this fact (and mostly demands his girlfriend come out of the motel bathroom where she’s locked herself in). This is the moment he understands what’s happening. 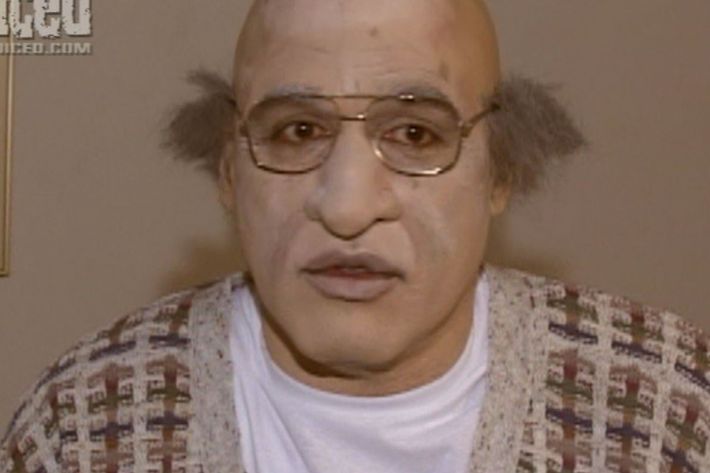 This is O.J. Simpson made up to look like an old white man. He actually gets into character for this bit, playing a fumbling but well-meaning senior who is excited to call bingo numbers for the first time. The joke, apparently, is that he’s bad at it, which pisses off the players at the senior center. As with most of the other pranks, there is no follow-through.

A topless woman jumps on a trampoline. 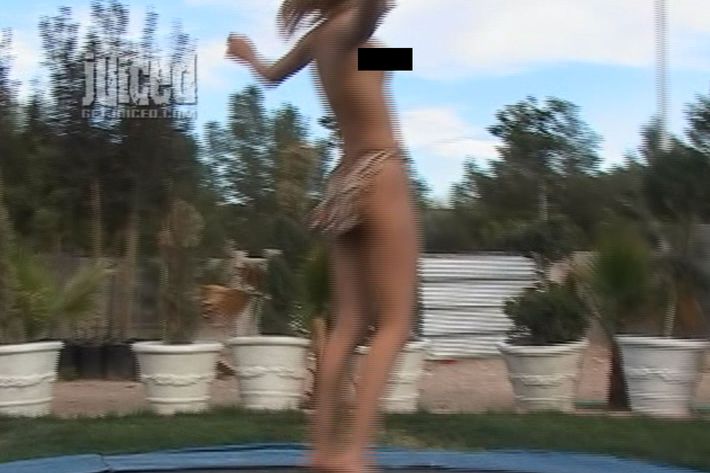 It’s unclear what the premise of this prank is. There’s a real-estate agent showing a house to unsuspecting buyers. She “pranks” them by breaking things and blaming them. Then another person, supposedly the owner, but not O.J. Simpson, gets mad at the buyers. It’s unclear why O.J. is there: Is he one of the owners? A real-estate mogul? A prospective buyer? And amid all of these questions, there is a topless woman bouncing on a trampoline outside. 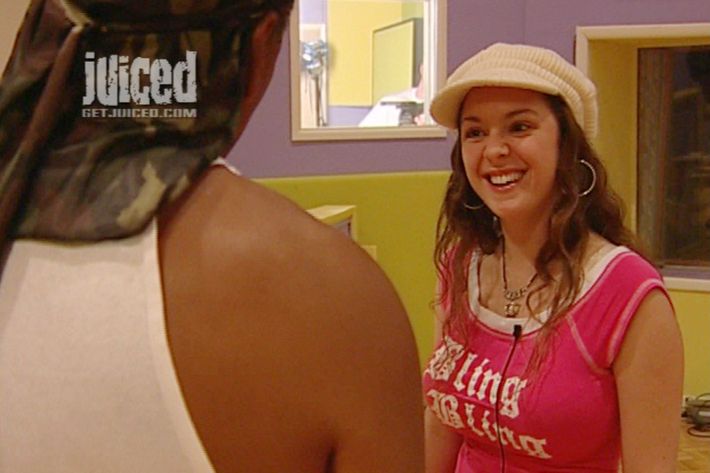 O.J.’s interactions with women throughout Juiced are the most uncomfortable moments, and this exchange is the worst. O.J. — who’s dressed like a rapper with bad teeth — clearly enjoys flirting with women, and this woman, bless her, was leery of him. She was there to audition to sing backup for a song that O.J. was apparently recording, only to have O.J. ask her out to a concert. Here’s the full exchange: 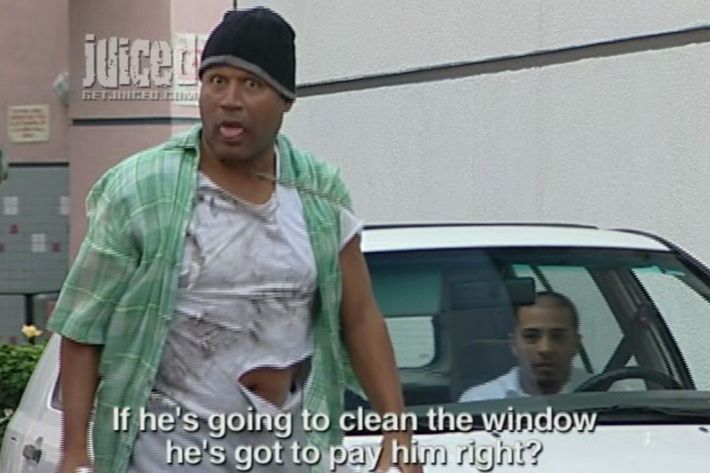 This is perhaps one of the few conceits that “works” in any conceivable way, in part because people don’t realize that it’s O.J. Simpson washing their car. Once they realize they’ve been “juiced,” they lighten up.

O.J. is dressed as Elvis surrounded by strippers. 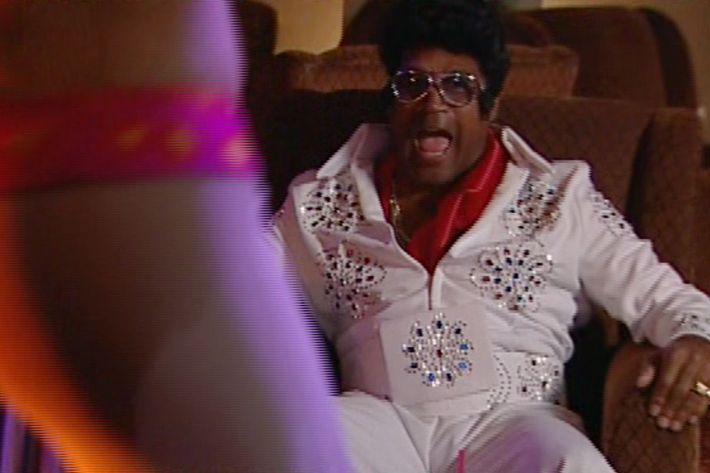 Do you feel drunk yet?

O.J. signs a white Bronco with a bullet hole in it. 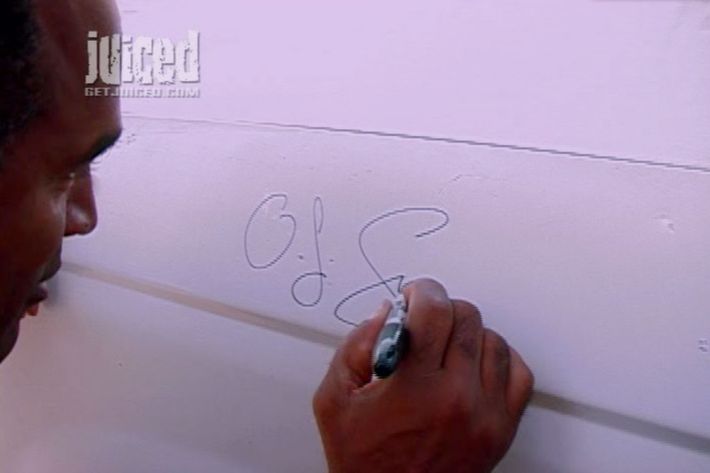 In this bit, O.J. plays a car dealer trying to sell a used white Bronco that he signed, with a bullet hole in it. Rather than get upset about the fact that the producers are bringing up his past, O.J. is in his element trying to get people to consider the Bronco. One of his big selling points: “It has escapability, that’s the main thing. I know it,” he tells one prospective buyer. “My boy Al Collins was driving this thing, and if we wanted to get away, it was easy to get away.”

The only context I can give you for this is that O.J. Simpson starts singing “They’re homosexuals” over and over again to these two men.

This guy’s anguish is all of us. 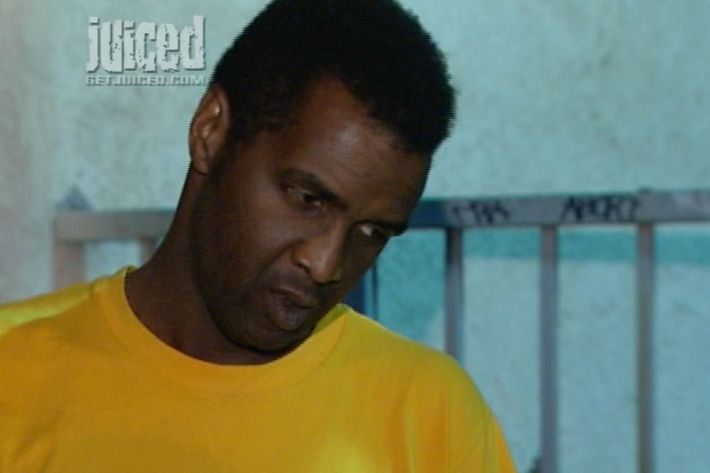 This man is one of the prank victims. In the setup, O.J. is a pizza delivery man, and he gives the man, who is the bartender, the wrong order. The man has clearly had a long night and is trying very hard to be reasonable. He asks for his money back because another delivery person has arrived with the right order. O.J. tells him that he needs the pizza back. The man returns it to him, only to have O.J. drop it on the ground and blame him. This man is tired. He has been working all night, or possibly watching this DVD, and he has had it. I feel you, man.

netflix house style 5:33 p.m.
The Duffer Brothers’ MasterClass Kills All Hope for a Steve and Dustin Spinoff But it just might tease a conspiracy-theory-filled Stranger Things 5.
tearing you asunder 5:29 p.m.
Stranger Things 4’s Most and Least Devastating Deaths Ranked by tears shed and byes waved.
rip 4:47 p.m.
Technoblade, Late Minecraft YouTuber, Honored by Gaming World “He will be missed dearly,” the official Minecraft account tweeted.
dinner party 4:34 p.m.
Where Are You Sitting This Week? Does the joy of Usher outweigh the burden of the DNC?
now streaming 4:00 p.m.
New on Paramount+: July 2022 Honor Society, South Park: The Streaming Wars Part 2, Peppa Pig, and more.
movie review 3:34 p.m.
Minions: The Rise of Gru Isn’t Smart Enough to Be Truly Stupid Inspired idiocy requires wit and invention, but the latest entry in the Despicable Me franchise doesn’t quite get there.
will byers gay watch 3:26 p.m.
Did Will Byers Come Out in the Stranger Things Finale? An Investigation. It’s the subtext that just won’t quit.
overnights 3:23 p.m.
RuPaul’s Drag Race All Stars Recap: I Know What You Did Last Christmas With only a few challenges left, our one-star girls better step it up.
movie review 2:59 p.m.
The Forgiven’s Toothless Indictment of White Cruelty The satire, starring Jessica Chastain and Ralph Fiennes, grasps for profundity but lands on insincerity.
[ranks wetly] 2:51 p.m.
Stranger Things 4’s Best Descriptive Captions, Ranked What more truthful statement about life’s eternal pain could there possibly be than [distant screaming, struggling]?
fmawn 2:32 p.m.
Sigourney Weaver Will Be De-aged and Na’vi’d for Avatar 2 What in the Polar Express …
overnights 2:15 p.m.
For All Mankind Recap: The Amazing Race For Space Nothing wrong with a little friendly competition in the race for Mars — except when friendly competition leads to everything going wrong.
doing the work 1:06 p.m.
Busy Philipps Arrested at Supreme Court Protesting for Reproductive Rights “For equality!”
power 12:35 p.m.
Everything to Know About the WNBA Star in Russian Custody Legal experts say Brittney Griner’s trial is likely to end in conviction.
vulture 10x10 12:09 p.m.
The Demogorgon Puzzle Don’t worry, these clues aren’t upside down.
life after roe 11:55 a.m.
Celebrities Respond to the Supreme Court’s Overturning of Roe v. Wade Including Viola Davis, Taylor Swift, and Ariana DeBose.
beyond bollywood 11:45 a.m.
India’s Zee5 Isn’t Perfect, But It Speaks the Languages The streamer may be a little messy, but it’s the best option to watch the subcontinent’s rich film output.
now streaming 11:44 a.m.
The 7 Best Movies and TV Shows to Watch and Stream July 4 Weekend There’s another murder in the building!
crop top no bra 11:36 a.m.
City Girls and Usher Invite Us to Cascade and the Cookout In the music video for their new summer bop, “Good Love.”
get well soon 10:55 a.m.
Bret Michaels Hospitalized, Cancels Poison Show in Nashville “I’m working on being back 100% very soon & hope you rocked hard with my friends Motley Leppard/Joan and Classless Act!!!”
More Stories