“Emilia got so cold, her jaw started shaking uncontrollably.”

Go-to Game of Thrones director Miguel Sapochnik — who’s behind episodes like “Hardhome,” “The Battle of the Bastards,” and “The Winds of Winter” — brings a cinematic touch whenever he helms an episode. “The Battle of the Bastards,” for instance, drew upon such varied films as The Lord of the Rings, Saving Private Ryan, Braveheart, and Kurosawa’s Ran, while a Godfather influence runs through the opening sequence of “Winter.” Sapochnik, who is still recovering from the finale, took a moment to answer a few questions for Vulture via email.

How did you go about conceptualizing the opening sequence? We can detect The Godfather, but what were some of your other influences? What were your goals?
The Godfather definitely had a hand in the conception of this sequence, but I also looked at various James Bond sequences for the explosions of the villain’s lairs. We wanted to make sure that it didn’t feel like a cheap trick to blow up the Sept of Baelor, and at the same time embrace the fact that it was something that people probably saw coming. How could we make it still feel like a shock?

I imagined a lot of it would be in the cutting, so I set about trying to break each scene I had into small beats, so that I could essentially cut up a scene into satisfying chunks that would go one after the other. That said, with all the planning in the world, when there are that many scenes, it’s a bit like the end of The Return of the Jedi — eventually you’re going to make it up in the edit room. And once we’d shot everything we thought we might need, that’s what we did. Slowly whittling it down until it felt like it was all one scene and of a piece. Then it was all about find a fitting piece of music that could convey the building tension and inevitable sense of something reaching a conclusion.

What did it take to do the wildfire explosion — visual effects and practical effects both?
A majority of the wildfire shots in the explosion are real explosions filmed at high speed on half-scale sets. These explosions are then digitally integrated into plates shot of the full-scale sets, and CG exploding barrels are added by VFX. The actual Sept of Baelor exploding is a CG digital concept from the ground up. The most fiddly shot was getting the candles in the green goo to go out and the wildfire itself to light up at the same time as Lancel performs, and the camera pulls away from us. That took a very lengthy number of tries before everything lined up and we got the shot. 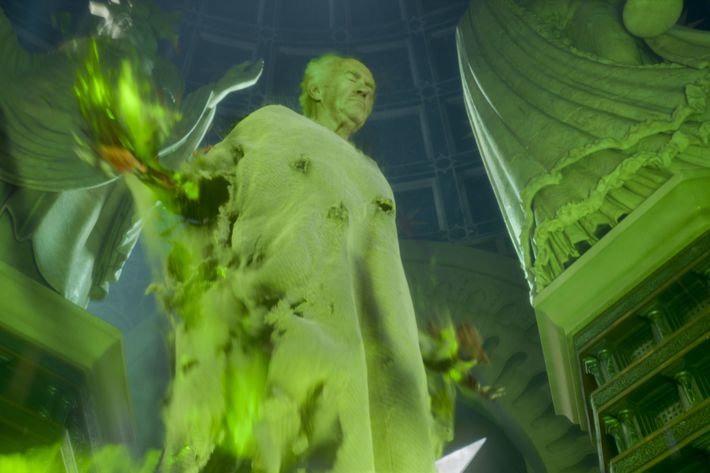 What was the most difficult or complicated shot to get in this episode?
The final sequence of seeing the armada on its way to Westeros was complicated because it involved so many different ships, and we only had one that we had to redress and shoot again and again. It was also raining and freezing when we shot it, and it was meant to be a Mediterranean climate. Emilia [Clarke] got so cold, her jaw started shaking uncontrollably and she totally lost her thread as far as what she was meant to be thinking in that moment (the cold will do that). She asked me to help, so I suggested that she just hum the theme to Game of Thrones in her head while we were rolling the cameras, and apparently that worked because it’s the take we used in the final cut!

brit awards 2021 12 mins ago
Little Mix Is the First Girl Group to Win the Brit Award for British Group “This award isn’t just for us. It’s for the Spice Girls, Sugababes, All Saints, Girls Aloud.”
casting call 15 mins ago
Ed Norton Joins the Killer Cast of Knives Out 2  The list of potential suspects is growing.
90s kids 2:04 p.m.
Retreat Into Nostalgia with the Legends of the Hidden Temple Reboot, You Baby And adults are allowed to play.
alexa play chasing cars 1:57 p.m.
Sandra Oh on Whether She’d Return to Grey’s Anatomy: ‘No’ “While I understand and I love it, I have moved on.”
the law 1:35 p.m.
The Biggest Revelations From the Pop Smoke Murder Case Hearings His alleged killer was only 15.
true believers only 1:08 p.m.
Huge Nerd Demi Lovato Will Investigate UFOs in a New Peacock Series [Meme voice.] Aliens.
superlatives 12:48 p.m.
The Most Virtuosic of St. Vincent, According to Annie Clark “With my guitar, I did what I always do, which is just kind of humbly make shit that I think is cool.”
By Brady Gerber
trailer mix 12:33 p.m.
Julianne Moore Is Spooky on Main(e) in Lisey’s Story Trailer “Was it real or was it my imagination?”
fruit ninja 12:04 p.m.
A Celebration of Jean Smart’s Sad-Funny Work on Mare of Easttown Helen Fahey just wants to play Fruit Ninja in peace.
quar goss 11:59 a.m.
Jennifer Lopez and Ben Affleck Went to Montana Alone for a Week, As Exes Do TMZ reported Affleck first reached out in February — and E! News says A-Rod is still reaching out too.
hot pod 11:40 a.m.
How NPR’s Invisibilia Reinvented Itself Plus, Clubhouse finally comes to Android.
reality tv 11:23 a.m.
Below Deck Sailing Yacht’s Boat Crash Was Worse Than All Those Clips Looked Both crashes, that is.
degrassi: where are they now? 11:02 a.m.
Drake to Receive Billboard’s Artist of the Decade Award at the 2021 BBMAs He beat out Taylor Swift, Rihanna, and more.
golden years 11:00 a.m.
An Ode to A Knight’s Tale and Its Perfect David Bowie Dance Scene Twenty years ago, A Knight’s Tale became a cultural phenomenon, thanks to the magical combination of Heath Ledger and a medieval disco.
By Ashley Spencer
trailer mix 10:33 a.m.
Matt Damon Brings Bass Pro Shop Energy to France in the Stillwater Trailer He needs to get his daughter out of jail.
trailer mix 10:05 a.m.
Dev Patel Is Axe Daddy in The Green Knight Trailer This one’s for the horny nerds.
movie review 10:00 a.m.
Army of the Dead Is a Tale of Two Zack Snyders His Netflix Vegas-heist movie set during a zombie apocalypse, starring Dave Bautista, starts off great, but the fun doesn’t last.
my single is dropping 9:52 a.m.
Sleater-Kinney Is Back As a Duo With a New Album Carrie Brownstein and Corin Tucker released lead single “Worry With You” off their self-produced album.
broadway 8:37 a.m.
Hamilton, The Lion King, and Wicked Will Return to Broadway September 14 It’s the circle of, wait for it, aaaaAAAaah.
movie magic 8:00 a.m.
How to Un-Cast an Actor When an Army of the Dead star got called out, director Zack Snyder decided to scrub him from every scene — and swap in Tig Notaro.
More Stories