For basically the entire history of television, if a show was explicitly set in Los Angeles, you knew what that signified: beaches, Hollywood, blondes of both sexes, cool cars, and money, money, money. Law, for example, would just be a generic show about lawyers, but L.A. Law is about lawyers steeped in sunshine and SoCal glamour. Even caustic comedies like Curb Your Enthusiasm and The Larry Sanders Show were set against the backdrop of vacuous Hollywood. “Previously, L.A. bought into the image imposed on it by other cities that it was the beautiful dumb one,” says L.A. Times TV critic Mary McNamara. “It was La-La Land.”

A new breed of L.A.-based comedies has arrived — and the L.A. they’re based in, and which they comedically exploit, may not be the one that reflexively springs to mind. It has its origin with Jill Soloway: Back when she was writing her debut film, Afternoon Delight, which came out in 2013, she considered several possible cities as settings, but she settled on the neighborhood she lives in: Silver Lake. If that place sounds familiar, it’s likely because (a) you live in L.A., (b) you’ve read something recently-ish about the ascendance of the city’s hipper eastern neighborhoods, or (c) you currently watch comedies on TV. Soloway set not only her film in Silver Lake but also much of her subsequent Amazon series, Transparent. Another comedy, on FXX, You’re the Worst, is set in Silver Lake and the surrounding neighborhoods. Last year, when Casual premiered on Hulu, the comedy set in or around Silver Lake was already becoming a recognizable trope. HBO’s recently canceled Togetherness, about 30-somethings navigating modern marriage, took place in Eagle Rock, and this year Netflix debuted the comedy Love, which takes place in and around its creators’ neighborhood of Los Feliz.

How Comedy Usurped Drama As the TV Genre of Our Time

The Silver Lake show (and here, no doubt to the irritation of L.A. residents, I’ll use “Silver Lake” as shorthand for Silver Lake, Los Feliz, Echo Park, and Eagle Rock) is an entirely new genre of comedy. These shows are different from L.A. comedies like Entourage or The Fresh Prince of Bel-Air because they’re not at all about the glamour and wealth of L.A. The characters may hold minimally satisfying jobs at the fringes of the entertainment industry — writers, music producers, publicists, tutors to child stars — but they aren’t fantastically successful or even reliably employable. And while these shows are definitely related to the larger genre of comedies about restless urban singletons, such as Girls and Broad City, the Silver Lake shows have a distinct flavor from their cross-country cousins in New York. If Seinfeld was patient zero for shows about nothing, it also pioneered a distinctly New York–y juxtaposition between trivial matters and characters who fret about those matters in a near-constant state of comic exasperation. In the Silver Lake shows, there’s a sun-baked equanimity to their brazen aimlessness. The neurotic sputtering of George and Elaine, or Hannah Horvath, or even Abbi and Ilana, would be entirely out of place here, as characters hotbox or gather at night to write fake theme songs to existing movies. The representative episode of the genre might be You’re the Worst’s “Sunday Funday,” in which the four leads — Gretchen, her sort-of, not-really boyfriend, Jimmy, and their sidekicks Lindsay and Edgar  plan a free-form day of drunken brunching and pointless cool-kid high jinks, such as visiting a petting zoo and racing shopping carts. As Edgar says, “I’m from L.A. — fun hipster shit is just poor Latino shit from ten years ago.” 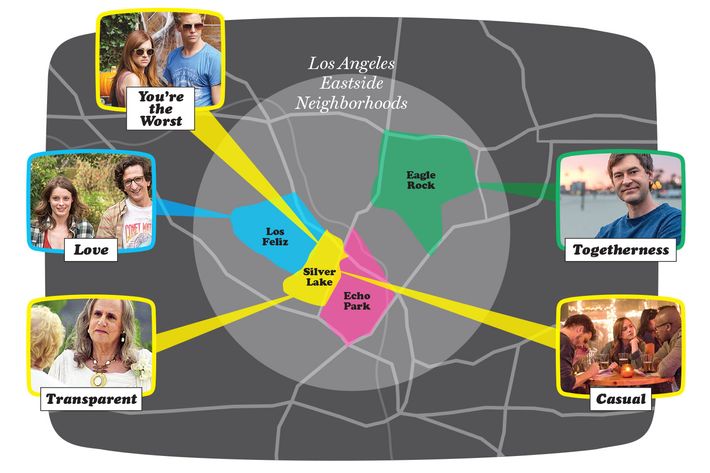 It’s tricky and, frankly, perilous, to try and pinpoint the beginning of Silver Lake as a trendy enclave, but the Silver Lake comedies date back approximately to 2014, when both Transparent and You’re the Worst debuted. There are a few reasons for their rise. The advent of ­single-camera streaming shows—what we might call the indie-­film-ification of TV comedy — means more shows are shot on location, rather than on sets, so they can take place in L.A. instead of on a soundstage in L.A. that’s dressed to look like New York. The economics of Peak TV also mean that more comedy creators are living in — and setting their shows in — these neighborhoods. “Back in the go-go ’90s, when you were on your second year of a hit show and you’re immediately getting a $2 million studio deal, there was a large component of TV writers who lived on the West­side,” says Stephen Falk, a resident of Los Feliz and the creator of You’re the Worst. “Now there’s been a slow migration east. People want to be in the cool place, and the West­side has lost that — it’s a little akin to Manhattan versus Brooklyn.” Nearly all the Silver Lake shows gently (or not so gently) satirize people more or less exactly like the people who make them. “We knew we were going to focus on the East­side,” says Paul Rust, who co-created Love with his wife, Lesley Arfin, and stars in the show. “We figured we’re already doing a lot of navel-gazing, so let’s focus on the neighborhood we live in.”

L.A. has long been a city of distinct neighborhoods, but in the national imagination, the whole city’s been lumped under the general classification of Hollywood. “So much TV is made here,” says McNamara, “but it took so long for you to see a Los Angeles that was not either a very grim depiction of South Central or Beverly Hills — the palm trees and the swimming pools and the movie stars and the beach.” Falk grew up watching Cheers, set in Boston, and Seinfeld, set in New York — both of which, of course, were filmed in L.A. “Los Angeles in television spent so long pretending to be something else,” he says. “Now maybe there’s a younger generation of writers who are from L.A., who live here, and who don’t have any problems with representing the city in which they live.”

There’s also a lot that the Silver Lake comedies leave out — for starters, given that they take place in such a diverse city, they’re notably white. And they tend toward a granular focus on the particular foibles of a subset of a demographic. “I’m a firm believer that specificity leads to universality, rather than the other way around,” says Falk. “So rather than set a show in a city I’ve been to and like, like Seattle or Austin or Chicago, I figured I would have a little more authenticity writing about the neighborhood in which I live.” Of course, this works well when there’s one or two shows set around your neighborhood, but it becomes a problem when there’s, say, half a dozen and counting. “To be honest, I’m not particularly excited about the crop of new shows that mostly came out on our heels,” says Falk. “It all feels a little watered-down to me. Love came along and shot in the exact same diner and the exact same booth we’d used for one of our sets. To me, that doesn’t help my show at all.”

But really, other than an overbooking of shooting locations, what’s to stop Silver Lake from becoming the new locus of TV comedy? If the whole country can laugh at Archie Bunker in Queens, or Sam and Diane in Boston, why not Mickey and Gus, or Jimmy and Gretchen, in Echo Park or Silver Lake? Rust thinks these lives, too, can be made to feel universal. “A lot of times, we talk about keeping the focus of the show on these two people falling for each other,” he says, “because there’s no more universal experience than ‘I like this person and I hope she likes me back.’ Then that allows you to add in the more specific observations.” Though, he adds, “we’re very proud we’ve never used that word in the show: the H-word.”

I initially assume, given the show’s L.A. setting, that he means “Hollywood.”

“Hipster,” he continues — citing the word that’s most often affixed to Silver Lake. “To me, it seems unnecessary. Why would we make a joke about a coffee shop being a hipster hangout? It’s like, I’m pretty sure that by now everyone likes ­coffee.”

How Comedy Usurped Drama As the TV Genre of Our Time

#metoo 18 mins ago
Chris Cuomo Accused of Sexual Harassment by His Former Boss A former executive producer says Cuomo groped her at a party in 2005 — and then apologized to her husband.
true crime podcasts 19 mins ago
This Week in True-Crime Podcasts: Revisiting 19th-Century Vampire Panics Plus, a closer look Houston, Texas, the armored truck robbery capital of the United States.
blast from the past 11:36 a.m.
Russell T. Davies Will Return to Doctor Who After 12 Years The showrunner, credited with reviving the BBC series in 2005, will succeed Chris Chibnall.
romantic simulations 11:18 a.m.
Elon Musk and Grimes Took the Red Pill and Broke Up “We are semi-separated but still love each other.”
respect the classics 10:42 a.m.
Johnny Marr Goes Full Mob Boss, Says He ‘Dealt With’ Rick Astley’s Smiths Covers “I didn’t ask for that.”
protest music 10:33 a.m.
Janelle Monáe Released a 17-Minute ‘Say Her Name (Hell You Talmbout)’ Featuring 16 other musicians and activists.
documentaries 10:25 a.m.
Hulu’s Framing Britney Spears Sequel, Controlling Britney Spears, Is Out Tonight With “new allegations” from inside the conservatorship.
encounter 10:00 a.m.
You Don’t Know Amalia Ulman The enigmatic artist cast herself and her mother in her new movie, El Planeta, set in her hometown. She swears it’s fiction anyway.
By Rachel Handler
my single is dropping 9:45 a.m.
Coldplay, BTS Are an Arena-Pop Supergroup on ‘My Universe’ The 11 musicians joined forces for the song off Coldplay’s upcoming Music of the Spheres.
overnights 8:00 a.m.
The Morning Show Recap: The Dinner Party Alex’s hero’s return is challenged by the little fact that everyone seems to hate her.
the grub street diet 6:00 a.m.
T-Pain’s Favorite Drinks Always Get Too Expensive “Clubs are like, ‘Well, we heard a rapper talk about it so now this is $1,200 more than last week …’”
By Chris Crowley
overnights 6:00 a.m.
Ted Lasso Recap: Never Can Say Good-bye Rebecca and Ted confront their parental baggage in a heartfelt episode that leaves a bunch of threads dangling.
mamma mia! Yesterday at 7:03 p.m.
Non-Italian Non-Plumber Chris Pratt Will Be the Voice of Mario Mamma mia, that’s a spicy cast list!
ridin' solo Yesterday at 6:06 p.m.
Jason Derulo Says He and Jena Frumes ‘Have Decided to Part Ways’ They just welcomed baby Jason Derulo in May.
tv review Yesterday at 5:55 p.m.
Midnight Mass Provokes More Thoughts Than Screams Hamish Linklater’s performance makes this Mike Flanagan’s best Netflix series to date, even if it’s a less frightening experience altogether.
the r. kelly trial Yesterday at 5:50 p.m.
Um, R. Kelly’s Lawyer Just Used Martin Luther King Jr. to Argue for Innocence For some reason, lead Kelly attorney Deveraux Cannick also invoked Mike Pence and Hugh Hefner in arguing that his client is not guilty.
cult followings Yesterday at 5:22 p.m.
HBO Max Throws Another Cult Doc to Its Devoted Followers With The Way Down The Way Down: God, Greed and the Cult of Gwen Shamblin is a mighty big name for a mighty big story.
💖💜💙 Yesterday at 4:33 p.m.
Happy Bi Visibility Day, Here’s Kelly Clarkson Covering ‘Make Me Feel’ It can’t possibly be a coincidence, right?
1.5x speed Yesterday at 4:00 p.m.
Going Deep on a Classic Fugees Album (and 7 More Podcasts Worth Trying) Including a series about gardening.
buffering Yesterday at 3:15 p.m.
Good Deal, Bad Strategy: Why the Paramount+ and Showtime Bundle Is a Mess Should they just be one service by now?
More Stories