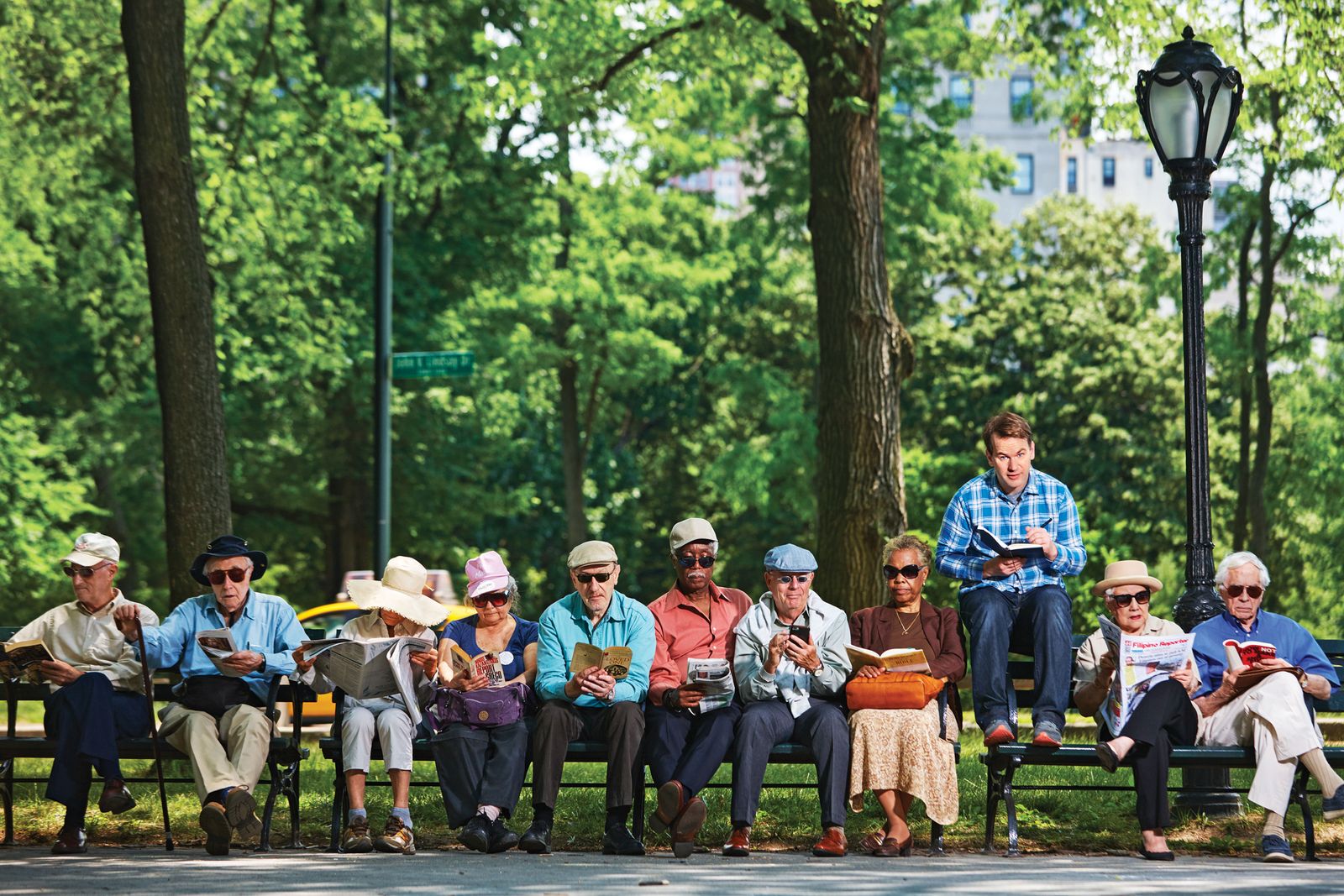 Mike Birbiglia Is Such a Nice Young Man

The comedian and filmmaker’s quest to create comedy of communion

On an afternoon in late May, Mike Birbiglia sits in his dressing room at Manhattan’s Lynn Redgrave Theater, where he’s about to perform his one-man show Thank God for Jokes for the 109th and final time of its run. A plush doll of Animal, the id-driven Muppet, sits in a chair across from the bright-eyed comedian, who himself looks a bit like a Muppet version of a brownstone-Brooklyn dad — a little wry and a little soft in his baggy blue plaid shirt. A nearly identical version of the same shirt hangs on a clothing rack, and Birbiglia will soon swap one for the other, transforming from the film director, stand-up, and evangelist for the redemptive communal power of comedy into “Mike Birbiglia,” the nap-loving, slightly befuddled zhlub he usually portrays himself as onstage and screen.

“I’ve played this show for 26,000 people over four months,” the 38-year-old Birbiglia says proudly. When I jokingly point out that there are arenas in the city where another comedian could’ve knocked out those numbers in a night, he says, “I know, right? If only I was Aziz [Ansari].” A sour look flashes across his face. “I would never play Madison Square Garden.” He calls that place “the worst comedy venue in the world.” “It’s fulfilling to perform for 250 people,” he continues. “To see everybody in the room, to feel like we’re neighbors, is pretty significant.”

That hunger for intimate connection is central to Birbiglia’s comedy. In all his work (including his new film, Don’t Think Twice, set in the insular, jealousy-ridden world of improv, and which he wrote and directed), he mines, again and again, the idea that comedy is a form of communion. “Jokes bond people like nothing else can,” as he puts it to me later. Which reminds me of a story he delivered at the Redgrave about the bad inside jokes shared between spouses.

That story is too pleasurably meandering to retell in full here, but the gist involves Birbiglia and his wife, the writer Jen Stein, calling Massachusetts “Cats-achusetts” in honor of the pet the two brought on a trip to his home state. Onstage, he acknowledged that the pun isn’t all that funny, but it was, he said, the couple’s “joke of the year!” He went on: The Cats-achusetts property was inhabited by a mouse unafraid of humans — so unafraid that it would sit next to Stein while she was watching TV. Birbiglia described the scene as being out of “Real Mousewives of Cats-achusetts,” then ambled into a story ending that had him and Stein redubbing the state “Mouse-achusetts,” which got a pretty big laugh. “I’ll point out something special that happened there,” Birbiglia said to the audience. “I prefaced the story with a Massachusetts-based pun, and we all agreed as a group: not funny.” He noted how the audience still laughed at the subsequent state-name puns. “Which means, in a way,” he said of his relationship to the crowd, “we’re married.” And when he said that, it felt as if he’d reached a goal, in the classic theatrical sense that all true comedies end with matrimony (of some form or another).

A couple of weeks after the Thank God for Jokes finale, Birbiglia is sitting at a table at Moo Burger, a restaurant near the Cobble Hill apartment he shares with Stein and their toddler daughter, Oona. He’s scribbling in notebooks, free-associating ideas for a This American Life taping at the Upright Citizens Brigade Theatre later tonight, at which he and a few friends will improvise scenes based on each other’s summer stories. The episode will come out in early August to help promote the tartly anthropological Don’t Think Twice, in which he co-stars with Key and Peele’s Keegan-Michael Key and Gillian Jacobs of Love and Community. The germ of the movie came from two observations of Stein’s: that Birbiglia’s improv friends were much nicer to each other than his stand-up friends, and that there are few emotional gulfs comparable to the one that can appear when improvisers — who rely so deeply on each other to be funny — experience vastly different degrees of professional success. Thus the film’s narrative, which involves the resentments that arise after one member of a close-knit improv troupe gets cast on a Saturday Night Live–style show. “We’re living in a culture that only admires success in relation to its visibility,” Birbiglia says when I ask about the ideas he wanted to explore with the film, “and not how people are helping each other.”

“You watch this movie,” says comedian John Mulaney, a friend of Birbiglia’s, “and you’re like, Ambition is unattractive, but inaction is insufferable. Seeing it almost made me want to both quit comedy and work twice as hard at it.”

Birbiglia hasn’t experienced either of those particular crises of confidence. He’s known he wanted to be a comedian since he was 16, when his older brother took him to see the absurdist one-liner Steven Wright. He began performing stand-up as a student at Georgetown University, starting with a set during his sophomore year at the “Funniest Person on Campus” contest. “I was pretending to piss my pants onstage,” remembers The Kroll Show’s Nick Kroll, who was in the same contest, “and Mike actually had funny jokes. We were playing at being a comedian, and he already was a comedian.”

From there it was a few short years to an hour-long Comedy Central special and then a CBS sitcom pilot, which never aired. “The fact that my show wasn’t picked up was the luckiest thing that ever happened to me,” Birbiglia says at the restaurant, reaching for a cob of corn — we’re sharing a plate of elote. “Everything predating that sitcom was me auditioning for the industry, and everything after was me trying to create something lasting and real.”

This desire to, in some nearly indefinable and deeply emotional way, make comedy that unites beyond mere shared laughter is apparent in all of Birbiglia’s post-failed-sitcom work. Take, for example, his breakthrough 2008 one-man show, Sleepwalk With Me, which he adapted from a story he told during one of his many guest appearances on This American Life about his own struggles with a rare sleepwalking disorder. There are, among other specifics, shaggy-dog tales that touch on the logistical problem of somnambulism and sleeping in other people’s beds, and that also explain his need to book ground-floor hotel rooms, but it all eventually coheres into a parable about changing your life. (On the subject of change, Birbiglia now sleeps in a sleeping bag.) “Mike doesn’t just do stand-up,” says comedian and You Made It Weird podcast host Pete Holmes. “He’s shown that with a little zooming out, a little structure, comics are so close to something profound and beautiful.” Birbiglia followed that show with a second extended-length monologue, this one about relationships, 2011’s My Girlfriend’s Boyfriend, and then, in 2012, his first directorial effort, a feature-film version of Sleepwalk With Me.(He also still tours as a stand-up and takes the occasional acting gig — he played the brother-in-law of Amy Schumer’s character in Trainwreck.)

Whether Birbiglia’s comedy can be lucrative as well as galvanizing is another matter, one with which he says he’s unconcerned. He turned down a development proposal from ABC that was engineered by Jimmy Kimmel, a longtime fan of his work. “The only way I could do something on a network,” Birbiglia says, “is if they just said, ‘Here’s the airtime, deliver us a show.’ ” He also currently operates without a manager. He does, though, have an agent, whom he’s told, “I may not be your biggest client, but I am still going to be around when the [current comedy] boom ends.”

Yet for all his idealistic talk about connection, Birbiglia is a man who just made a movie about professional envy. So when I ask how he’s felt over the years seeing friends and colleagues like Kroll, Holmes, and Mulaney get TV shows with their names in the title, he grins. “When you mention them,” he says, “I do remember varying degrees of bitterness.” We’ve all been there. It’s a classic Birbiglia move: bitterness as a bonding experience.

*This article appears in the July 11, 2016 issue of New York Magazine.

Movie Review: Don’t Think Twice
+Comments Leave a Comment
Mike Birbiglia’s Comedy of Communion
goodbyes 2:49 a.m.
Aidy Bryant Says Goodbye to SNL With a Final Trend Forecast Alongside Bowen Yang.
goodbyes 1:32 a.m.
Kate McKinnon Bids Farewell to SNL, Ascends to Space “I always kind of felt like an alien on this planet anyway.”
second wedding Yesterday at 6:51 p.m.
Let Drew Barrymore and Paul Feig Make Bridesmaids 2, You Cowards Free puppies for everyone!
beloved Yesterday at 5:36 p.m.
Quinta Brunson’s Mom Didn’t Understand Her Job Until Abbott Elementary “I showed [my mom] a BuzzFeed video and she was like, ‘What is this?’”
fridge fixer Yesterday at 3:26 p.m.
Jeremy Strong Practiced His Dad Jokes on Anne Hathaway The two star as fictional versions of James Gray’s parents in Armageddon Time.
overnights Yesterday at 11:08 a.m.
RuPaul’s Drag Race All Stars Recap: Monsoon Season Jinkx has reached the apex of what it means to compete in Snatch Game.
cannes 2022 Yesterday at 11:01 a.m.
George Miller Returns to Cannes With a Freaky, Maximalist Fairy Tale Three Thousand Years of Longing is a fairy tale within a fairy tale (about telling fairy tales) that feels like Miller’s answer to The Princess Bride.
By Rachel Handler
box office Yesterday at 2:01 a.m.
Everything Everywhere All at Once to Beat Uncut Gems As A24’s Biggest Hit At the domestic box office in this universe, at least.
hiatuses Yesterday at 12:05 a.m.
Doja Cat’s Tonsils Have Canceled Her Summer Performances, Including Lollapalooza She’ll be taking time off to recover from surgery.
timelines May 20, 2022
A Timeline of Travis Scott’s Post-Astroworld Public Return His previously postponed collaboration with Nike is back on.
farewells May 20, 2022
Kate McKinnon, Aidy Bryant, and Kyle Mooney Are Reportedly Leaving SNL Joining Pete Davidson in calling this season their last.
thank u next May 20, 2022
Pete Davidson Leaving SNL, Ending Longest Public Relationship Sources say the season-47 finale will be his last appearance.
protests May 20, 2022
Cannes Film Festival Removed Activist Protesting Sexual Violence in Ukraine The naked protester interrupted the red-carpet premiere of George Miller’s Three Thousand Years of Longing.
that's gossip May 20, 2022
This Newsletter Just Revealed DeuxMoi’s Probable Identity Who gossips the gossip girls?
chat room May 20, 2022
Judd Apatow on Documenting the Legacy (and Fart Jokes) of George Carlin Talking with the filmmaker about his HBO docuseries on the legendary stand-up.
cannes 2022 May 20, 2022
Chie Hayakawa’s Plan 75 Quietly Devastates Cannes The heart-wrenching dystopian film, about a government program for euthanizing senior citizens, marks the arrival of an exciting new writer-director.
overnights May 20, 2022
RuPaul’s Drag Race All Stars Season-Premiere Recap: A Winning Twist This season is already one of the best we’ve seen from the franchise, and it shows no sign of slowing down.
influences May 20, 2022
Alex Garland on Attack on Titan, Notting Hill, and More of the Influences on Men “I just think life is strange, and I’m trying to reflect how strange life feels to me.”
By Katie Rife
rip May 20, 2022
Bob Neuwirth, Folk-Music Fixture and Bob Dylan Confidant, Dead at 82 He played with Bob Dylan and co-wrote Janis Joplin’s “Mercedes Benz.”
overnights May 20, 2022
For All Mankind Recap: The Unbearable Lightness of Being (on the Moon) The tensions between dreams and reality are woven into nearly every moment as the upcoming missions loom.
More Stories