Nickelodeon dropped a first look at the art from their upcoming Hey Arnold!: The Jungle Movie film at Comic-Con and it looks like pretty much nothing has changed in the 12 years since we’ve visited Hillwood. The passage of time is only visible in the haunted, weary eyes of Abner the pig. While Nick could have tried to update the gang for 2016 (Pokémon Go would be huge!), it seems they’ve opted instead for classic kid nostalgia. The two-hour movie, which focuses on Arnold’s quest to discover the fate of his late parents, will air sometime in 2017. 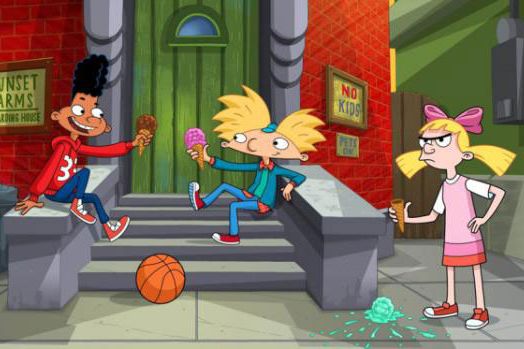 behind the music 20 mins ago
The Making of Girls5eva’s Catchy, Laugh-Out-Loud Fake Pop Songs Creator Meredith Scardino and composer Jeff Richmond break down what went into making Peacock’s new hit-making, best-selling fictional pop group.
movie review 21 mins ago
Chris Rock and a Game Cast Can’t Quite Save Spiral: From the Book of Saw It’s more a tired cops-chase-a-serial-killer movie than a tired Saw sequel.
lavender gooms 22 mins ago
We’re Getting a Third Psych Movie, You Know That’s Right!!! Gus goes rogue before his shotgun wedding.
reality tv 22 mins ago
Bravo Thawing Out Southern Charm, Summer House, Below Deck Spinoffs Cool confirmations for previously teased Summer House Winter Charm and Norway-set Below Deck Adventure.
buffering 2:35 p.m.
When a Quibi Becomes a Roku Plus: People are watching Pan Am again?
they're still there for you 1:49 p.m.
Could This Friends Reunion Trailer Be Any More Sappy? Coming on May 27.
top gun 1:30 p.m.
Top Gun’s Rick Rossovich on That Iconic Beach Volleyball Scene, 35 Years Later “I was always angling to use my physique as one of my assets in characterization.”
By Bilge Ebiri
reality tv 1:27 p.m.
Peacock Will Serve Up Spinoffs of Below Deck, Top Chef, Making It With Meghan Trainor involved, too!
throwback 1:18 p.m.
Paramount+ Restarts The Game With Wendy Raquel Robinson and Hosea Chanchez The Mara Brock Akil classic is making a comeback.
movies 1:00 p.m.
The 2022 Sundance Film Festival Will Be In-Person and Online Taking place from January 20 to 30.
emergency discussion 12:59 p.m.
What’s Going on With Cruel Summer? Halfway through the season, it’s time to discuss the Freeform ratings juggernaut.
this week in comedy podcasts 12:31 p.m.
This Week in Comedy Podcasts: JB Smoove Elaborates Rounding up our favorite comedy podcast episodes of the week.
By
keeping up with the ex-royals 12:12 p.m.
Meghan Markle and Prince Harry Did Supermarket Foreplay They pretended that “we didn’t know each other.”
sexual assault awareness 12:09 p.m.
Charlyne Yi Responds to Seth Rogen’s James Franco Statement She also suggests names of seven actresses for Rogen to apologize to.
podcast review 12:00 p.m.
The Improvement Association Tries to Dismantle ‘The Big Lie’ The New York Times podcast zooms in on one county’s response to election-fraud mania.
the streaming wars 11:15 a.m.
The Real Story Behind Netflix’s Top 10 Lists  And what the company is doing to them next.
moulin rouge! 11:00 a.m.
Ranking the Top Ten Moulin Rouge! Songs, 20 Years Later The Oscar-winning Baz Luhrmann spectacle holds up — for the most part. To investigate, Vulture dives back into its over-the-top musical numbers.
By Stephanie Bencin
mask off 10:32 a.m.
3 Hansons + 1 Russian Doll = Our New Masked Singer Nightmare Twist it off! Twist it off!
cancellations 10:23 a.m.
Oh No, Ellen Is Talking About Cancel Culture Now “It felt like somebody really did not want this show to come back.”
chat room 9:39 a.m.
If You Hate Laura Benanti’s Younger Character, ‘I’m Doing My Job’ And yes, she’s “surprised” Charles fell for Quinn.
More Stories