My Week in New York: A Saturday newsletter from the Editors.
Sign Up
|
Photo: Frederick M. Brown/Getty Images

“When I pointed out the Peak TV phenomenon at the summer TCA last year, I wrongly predicted that we’d hit the peak in 2015 or 2016,” he said in his opening remarks. “It now seems clear that, at a minimum, the peak will be in calendar 2017 — and there is enough inertial momentum here that we could well see the growth trend carrying over into the 2018 calendar year … I don’t think I understood at this point last year that Netflix was going to try and compete with the entire MVPD system and all of its channels on a global basis rather than just, say, match the output of HBO.”

He went on to say that he isn’t predicting full end times. “I’m not saying that I believe we are in a bubble which is going to pop, causing us to go from 500-plus scripted series to half that number,” Landgraf explained. “Rather, I think we are ballooning into a condition of oversupply which will at some point slowly deflate, perhaps from 500-plus shows to 400 or a little less than that.”

He went on to praise Peak TV for allowing for more diversity hires in front of and behind the camera, even though this isn’t something FX has always excelled at. Landgraf said he was so dismayed to see how poorly his shows performed in this department after an investigation by Variety critic Maureen Ryan that he “wrote a letter to all of the FX networks’ showrunners — those who actually make the hiring decisions for episodic directors —asking for their help.” He pulled out a graph to prove that “we have booked 149 episodic directors. Seventy-three of those 149 — or 49 percent —are white males. Seventy-six of those 149 — or 51 percent — are female and/or diverse. Seventeen of these female or diverse directors — 11 percent of the total hires — have been first-time episodic television directors.” 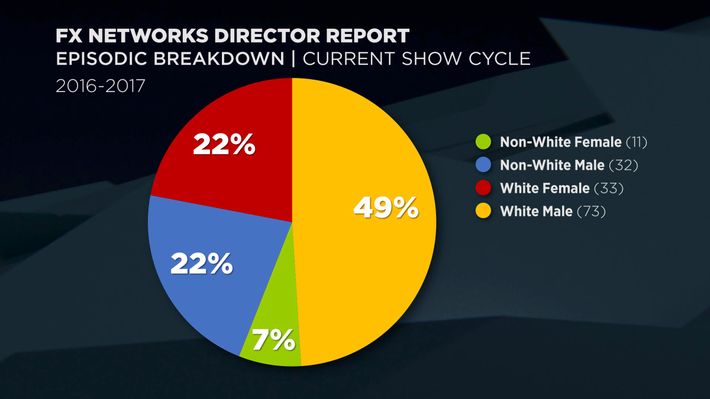 Landgraf said he’s always thinking about “where television is going next,” and one of his strategies to stay ahead of the game is to push the comedy-focused FXX network aggressively into animation in the “near-short” future.

tv review 28 mins ago
Shadow and Bone Almost Gets Lost in the Dark Netflix’s adaptation of the Grishaverse novels pulls it together in the end, but only after traversing a vast, foggy muddle of exposition.
this! is! jeopardy! 4:00 p.m.
LeVar Burton Will Fly Twice As High As Jeopardy!’s Next Guest Host He had been campaigning for the gig.
tv 3:46 p.m.
Master of None Season 3 Will Premiere on Netflix in May After a four-year-long hiatus.
anime 3:35 p.m.
The Demon Slayer Movie Is Breaking the Mold and Shattering Records Japan’s highest-grossing film ever, Mugen Train, is pulling into the station in North America. Here’s what you need to know.
the streaming wars 3:30 p.m.
Shudder Knows What You’ll Stream This Summer How the horror streamer built a service even the snobbiest superfans would approve of.
broadway 2:35 p.m.
Hugh Jackman Belts Out a Statement About Scott Rudin in All Caps Must get rid of toxic in community.
bethenny hiring a vp 2:23 p.m.
Bethenny Frankel Needs Someone to Run Her Goddamn Circus The Big Shot With Bethenny heads to HBO Max next week.
i would like to see it 2:17 p.m.
Whoopi Goldberg Is Writing a Superhero Movie About an Older Black Woman “Do you know who’s really going to save the earth?”
a total knockout 2:00 p.m.
The Mortal Kombat Theme-Song Creators Didn’t Know They’d Created a Knockout Olivier Adams and Maurice “Praga Khan” Engelen created a winner in 1994, one still ringing in our ears to this day.
meet cutes 1:30 p.m.
Hilary Duff Will Recount How I Met Your Father for Hulu Sequel Series Self explanatory.
hair and makeup 1:27 p.m.
How Ma Rainey’s Oscar-Nominated Hair and Makeup Team Transformed Viola Davis The Oscar-nominated creatives behind the star’s wigs and glam take us through what it took to make over one of Hollywood’s most recognizable women.
By Emma Fraser
rankings 1:23 p.m.
Okay, Let’s Talk About ARTPOP Talented! Brilliant! Incredible! Amazing! Showstopping! Spectacular! Never the same! Totally unique!
By Wolfgang Ruth
adaptations 1:11 p.m.
Antoine Fuqua Will Direct an All-Black Cat on a Hot Tin Roof Movie Inspired by the 2008 Broadway revival of the Tennessee Williams classic.
the gold rush 12:33 p.m.
All 56 Movies Nominated for an Oscar This Year, Ranked Some might suggest our ranking of every nominated film is subjective, but we might suggest you let the truth just sink in.
By Joe Reid
going independent 12:18 p.m.
Tim Heidecker Takes On Cinema Straight to the People “You can build a Netflix if you have an audience that wants to watch your shit.”
By Chris Kopcow
vulture lists 12:00 p.m.
8 Great Audiobooks to Listen to This Month Caroline Kepnes, Brandi Carlile, Jonathan Ames, and more.
verzuz 11:51 a.m.
Method Man and Redman Ruined Our High by Calling Russell Simmons During Verzuz The disgraced Def Jam founder has been accused of sexual assault and misconduct by 20 women.
tv review 11:17 a.m.
Romeo and Juliet, Horny on Main The TV film starring Josh O’Connor and Jessie Buckley is the lust-dazed, modern-dress version of the Shakespeare tragedy you didn’t know you needed.
By Helen Shaw
quibi 10:16 a.m.
Quibi Is ‘Roku Originals’ Now, But Don’t Try Rotating Your TV From a phone app you never opened to “the biggest screen in the home.”
friday night movie club 10:11 a.m.
Twilight Is Forever Camp-Cringe Royalty Give Bella Swan a Nobel Prize now.
More Stories