There’s a cohort of television shows that are way too dark. Not necessarily in terms of thematics or subject matter (although they often go hand in hand) — just, visually, so dark that it’s hard to even see the image. These are the kinds of shows that you try to watch on your fair-to-middling laptop screen in the middle of the day and find yourself straining to see what’s going on; shows where even on your giant flat-screen, you find yourself making sure all of your lights are off so that you can distinguish people’s bodies from one another. And it is probably not a coincidence that the sorts of shows that suffer from this problem are almost never comedies. 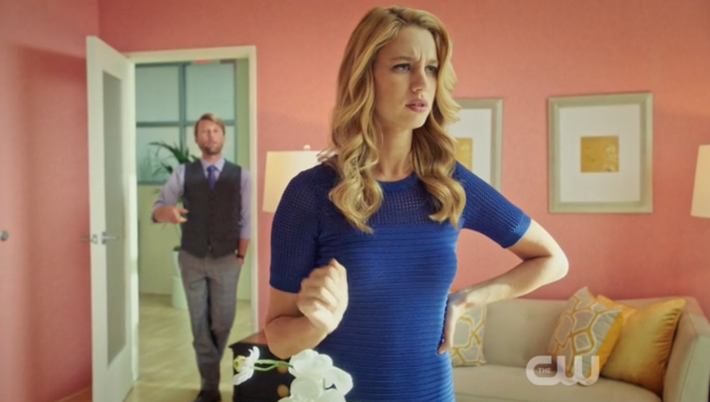 The underlying implication built into those two poles, though, is that Mr. Robot is “serious” (and all of the accompanying prestige-y, artistically important things that label implies), while Jane is not. Which is absurd, of course. There’s no inherent reason why Jane’s content should be considered less “serious,” and indeed, Jane is one of the most sneakily political, passionately argued shows around. But Jane is also funny. And so it’s also sunnily splashed all over with high-contrast, saturated colors, like a gloriously technicolor Rogers and Hammerstein musical. Mr. Robot, meanwhile, looks like someone has perpetually forgotten to turn on a lamp somewhere. 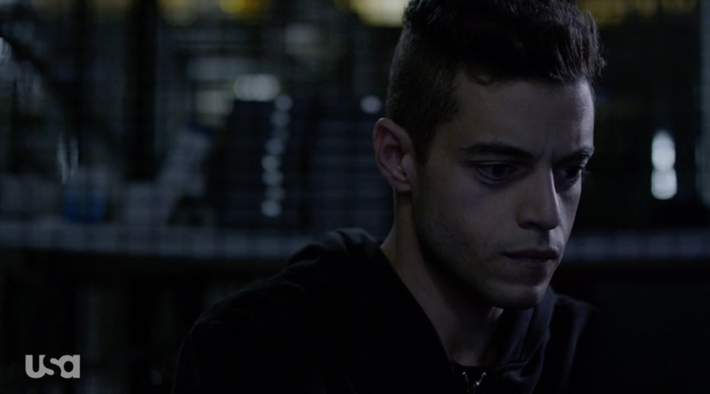 Still, there are lots of complicating variables in those two examples. The setting alone is reason enough why the colors might be so radically different. So let’s try to compare something more apples to apples. Take Halt and Catch Fire, a show that’s recently shifted its setting from Texas to Silicon Valley. Two episodes into its third season, Halt and Catch Fire’s Bay Area is the darkest, gloomiest California imaginable. Mutiny, Donna and Cameron’s internet start-up company, seems to hold all of its working hours at night, or in a large, industrial office space that inexplicably has no windows. Donna and Gordon’s home is marginally brighter, but even their morning breakfast scene looks weirdly gloomy. 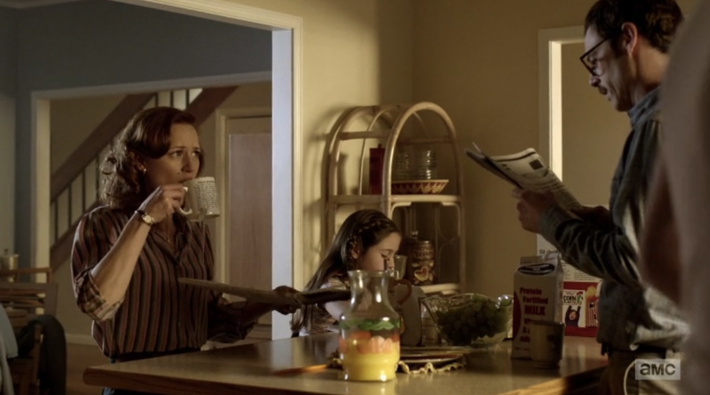 Compare that image with HBO’s Silicon Valley, a series that takes place in the same geographical place, with people who do the same jobs, in the same competitive start-up culture. The difference is remarkable. Silicon Valley’s California is full of saturated colors and bright sun. Even nighttime conference rooms feel warm and well-lit.

Here, the difference is clearly tonal. Silicon Valley is a comedy, Halt and Catch Fire is a drama. And HACF signals its seriousness with literal darkness, even though the subject matter is nothing like the apocalyptic murk of Mr. Robot. But because it’s about “serious” innovation, Donna and Gordon have sex in near blackness, and Mutiny looks like its offices are in a cave.

(Even when it escapes the computer world, HACF is still relentlessly dim. A scene at an elementary school in the middle of the day looks like it could be taking place during a blackout.)

It’s hard to say whether TV drama has always been this way. TVs used to be 20-inch cathode-ray tubes that had all the crystal clarity of a bad glasses prescription, and color was something you could adjust with a knob on the side. Homicide: Life on the Streets is a pretty dark series, visually and otherwise, but it feels unfair to compare that series’ visual style with a show made to display on retina displays and massive flat-screens. And certainly, this concept of “prestige” TV, and its accompanying shadowy solemnity, is an invention of the past 20 years. The color possibilities for TV dramas are now endless. Why does it too often feel like we’re Dorothy and we’ve woken up in Oz, only to find that the yellow brick road looks beige at best?

It doesn’t have to be this way. Mad Men, a show synonymous with prestige and seriousness, was awash in brilliant color. While Breaking Bad certainly had its dark scenes, it also used color to gorgeous, useful storytelling effect. Stranger Things, a series with every genre-related reason in the world to be creepily dark, often is. But it’s much better at telling stories easily distinguishable by color, so that the monster-plagued Byers house is constantly shadowy… 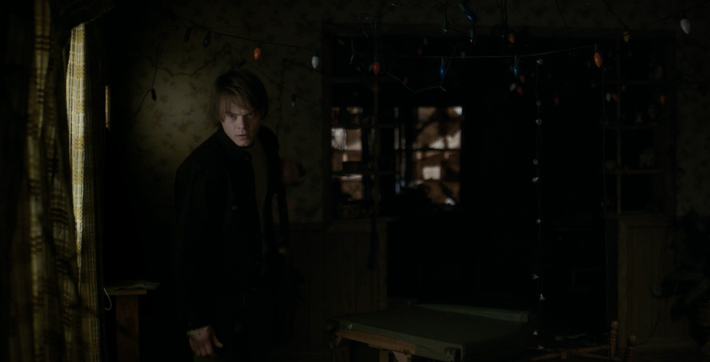 …and Mike’s home, a bastion of safety, is far brighter. 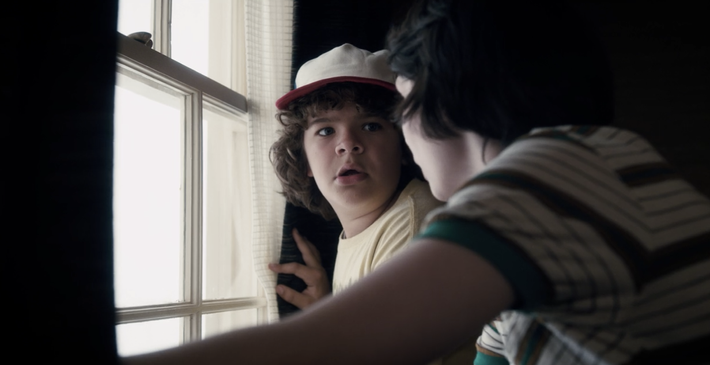 Or there are series like Narcos, which follows the Difficult Criminal Man arc that’s become so familiar to us from the last decade and a half. It could easily fall into that same dim color palette to signal how serious and important it is, but it’s often stunningly bright, lit by yellows and oranges that deepen and reinforce the show’s insouciant, distantly wry tone. Compared with that saturated goldenrod palette, any given episode of the otherwise genius The Americans is bound to look murky.

Not all TV needs to be bright all the time. Periods of darkness are vital visual tools, which do so much to create mood and delineate space and time. When an entire episode of Jessica Jones is filmed in unrelenting noir shadows, though, and when Ray Donovan’s perpetual sepia gets too boring, and every non-Daenerys scene of GOT looks like it’s been stained with coffee, the effect is lost.

So-called “serious” TV has so many tools to communicate complexity and bleakness — there are characters who are tough to understand, opaque stories that are hard to predict, endless layers of complication and obliqueness available to TV storytellers. There’s also a seemingly boundless permission for depictions of violence. If the goal is to make a series hard to watch, there are lots of ways to do it. It does not also need to be hard to see.

+Comments Leave a Comment
TV Dramas Are (Literally) Too Dark

solidarity forever 6 mins ago
Employees at Activision Blizzard Win Vote to Form Company’s First Union On the same day that federal labor officials alleged that the gaming company illegally threatened staff.
no thank you Yesterday at 11:00 p.m.
Riley Keough Says She Didn’t Want to Star in Baz Luhrmann’s Elvis You know, the biopic about her grandpa.
overnights Yesterday at 10:11 p.m.
Better Call Saul Mid-Season Finale Recap: The Beginning of the End Better Call Saul conned us just as brilliantly as Kim and Jimmy conned Howard.
overnights Yesterday at 10:00 p.m.
We Own This City Recap: No Honor Among Thieves These guys cannot turn on each other fast enough.
overnights Yesterday at 9:30 p.m.
Below Deck Sailing Yacht Recap: Sequins and Wigs Gary’s need to flirt continues to cause chaos on the Parsifal III.
work wife Yesterday at 9:05 p.m.
Jason Momoa Apparently Pushed for Amber Heard to Keep Her Aquaman 2 Role According to expert testimony in Johnny Depp’s defamation trial.
overnights Yesterday at 9:00 p.m.
For All Mankind Recap: A Fine Romance Trope For All Mankind gets jam-packed with tropes from romance novels. Who knows if it was intentional, but it works.
extremely online Yesterday at 6:26 p.m.
Halsey Goes Viral in an Attempt to Avoid Going ‘Fake’ Viral on TikTok Claiming their label won’t let them release a new song yet.
exes Yesterday at 5:46 p.m.
Kate Moss Will Testify Wednesday in Johnny Depp’s Trial Depp’s team is also planning on calling him back to the stand later this week as a rebuttal witness.
the law Yesterday at 5:19 p.m.
Gunna Denied Bond for Gang Charge, Trial Set for January The rapper’s attorneys denied he would be a risk for witness intimidation.
endings Yesterday at 3:00 p.m.
The Empty Symbolism of Men’s Ending Alex Garland’s Men is laden with symbolism, much of it provocative and highly gendered. But what does it all add up to?
By Katie Rife
manchester's finest Yesterday at 2:13 p.m.
Liam Gallagher Hops Aboard His Own ‘Magic Bus’ His maraca-infused track, “World’s in Need,” was inspired by the Who.
cannes 2022 Yesterday at 1:01 p.m.
The ‘Eat the Rich’ Comedy Making Cannes Say ‘Blech!’ In Triangle of Sadness, Ruben Östlund rubs audiences’ noses in shit. They love him for it.
By Nate Jones
decisions decisions Yesterday at 12:15 p.m.
Everything to Consider When Making a Comedy Special Special Aside from what jokes to tell.
By Kathryn VanArendonk
vulture 10x10 Yesterday at 12:00 p.m.
The Hazza Puzzle 33-Across, Five Letters: Hitchcock role in a Hitchcock film, e.g.
beginning times fun Yesterday at 12:00 p.m.
The Special Special Stand-up isn’t just getting prettier onscreen. It’s growing up as a distinct art form.
By Jesse David Fox
vulture lists Yesterday at 12:00 p.m.
Every Lady Gaga Song, Ranked Here’s where Love For Sale and “Holy My Hand” land on the all-time list.
By R.S. He
vulture lists Yesterday at 11:00 a.m.
The Cast of Downton Abbey’s Most Un-Downton TV and Movie Roles Michelle Dockery as a prosecutor, Lily James as Pamela Anderson, and much more.
brilliant! Yesterday at 11:00 a.m.
Peaky Streamers: A Guide to the Best Services for British Movies and TV Acorn, BritBox, and plenty of other places for Anglophiles to get their fill.
trailer mix Yesterday at 10:36 a.m.
Freak Out! Over New Bowie Footage in Moonage Daydream The first estate-approved David Bowie film featuring his music.
More Stories