This is some performance art.

Frank Ocean is a man of many talents, but up until the early hours of Monday morning, who knew carpentry was among them? In preparation for (or maybe even in lieu of) his way-past-due new album, Boys Don’t Cry, Ocean has been livestreaming (or has been on an evolving loop) for a few hours. So far, we’ve seen him – or a shadowy figure that vaguely resembles him – table-saw countless slabs of wood, ponder the meaning of life atop his workbench, do some pacing in circles, then get back to it, all soundtracked by various instrumentals. Just prior to time of publication, he’d been taking frequent breaks, but has since been on a consistent roll doing more woodwork in the back that’s not quite visible. So, what, exactly, is up here? Naturally, Twitter has unearthed a theory from March that may have some answers:

Thanks for breaking your contract to try to impress me, it didn't work but it's some nice Twitter material dude

@SullivanBobby building. He builds a staircase (of the spiral variety I believe) in the video.

The source of the theory has since responded with the same shock as everyone else that, damn, that guy might’ve been telling the truth:

Now, of course, this is all hearsay. But according to Vulture’s editorial director and resident architectural expert, Neil Janowitz, there’s at least some validity to it. By his eye, “the stock” Ocean has cut could make a staircase, possibly even a “rudimentary” spiral based on a hole Ocean recently drilled. 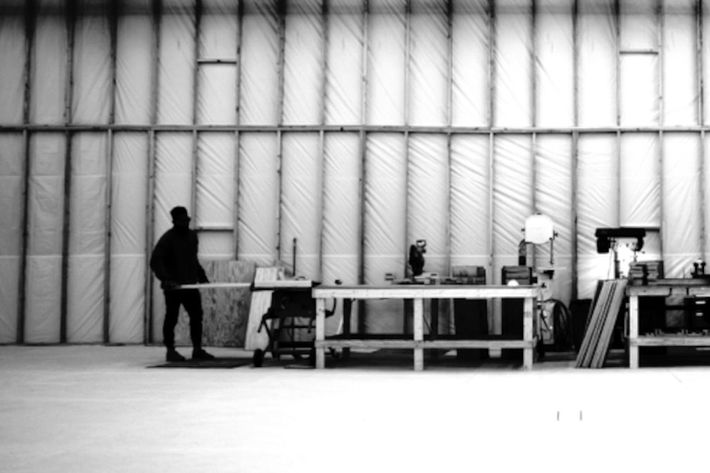 At the very least, Ocean took Wood Shop 101 because he’s since incorporated what appear to be gloves, a mask, and protective glasses. Stay tuned!

+Comments Leave a Comment
Is Frank Ocean Building a Staircase?