Is this an add for Trolls? Photo: Christian Petersen/2016 Getty Images

Brazil had a lot to prove with its budget-friendly Olympics opening ceremonies, as it launched one of the world’s biggest sporting events amid concerns about … well, pretty much every aspect of the nation’s preparation. To that end, the ceremony — directed by filmmakers Fernando Meirelles, Daniela Thomas, and Andrucha Waddington — leaned into the country’s complicated story, portraying everything from its colonial history to the modern challenges of urbanization. Of course, there was also a big dance number and a showstopping catwalk from Gisele Bündchen. Brazil knows how to throw a party. Below, some of the ceremony’s biggest moments.

An opening that seemed less Brazil and more Brazil.

The ceremonies began in the primordial seas, with performers piloting robotic crab creatures in some strange, semi-futuristic performance art.

A dive into the country’s colonial history, and NBC’s fumbling attempts to describe it.

As dancers reenacted the legacy of the slave trade, NBC’s anchors struggled to come up with ways to describe Brazil’s past.

The cities have risen, and the people have learned to dance within them.

The supermodel walked down the catwalk to “The Girl From Ipanema” for a full 90 seconds. Look at that confidence.

The grim take on global warming that, yes, was narrated by Judi Dench 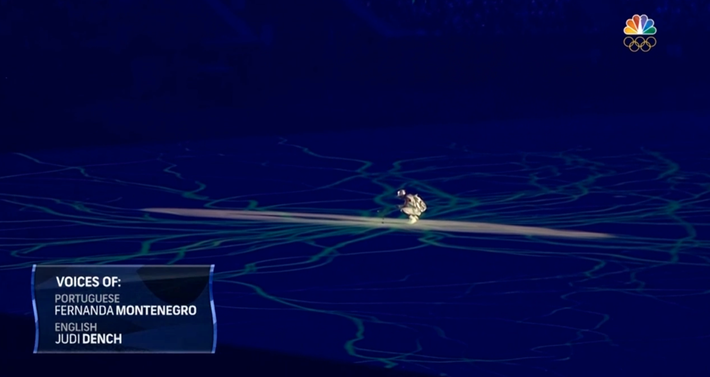 There was more discussion of climate change during the opening ceremony than you would ever hear in American politics.

Dance like the world is ending, because [checks above] it really is.

And, of course, the great Parade of Nations uniforms.

Now, we couldn’t pull out every look from the crowd, but here are some of Vulture’s favorites.

And Tonga, a glistening meme in the making.

The home team took the field in some of the night’s best hats.

Blazers are often a crucial part of the Parade of Nations ensembles, and Canada took the literal route this year.

While the delegation from Thailand went the jazzy route in gold.

But Indonesia won the unofficial jacket competition in these extra-festive numbers.

Then NBC made it geopolitically weird again when China came out.

Finally, Brazil organized the parade with some great whimsical bicycles.

The Olympics: Brought to you by Willy Wonka.

And with the Parade complete and the Olympic cauldron lit, the 2016 Games in Rio are officially underway.

ho ho ho 2 mins ago
Sexy Santas, Ranked There’s something about that twinkle in his eye …
awards szn 16 mins ago
New York Film Critics Circle Gets the TÁR Love STÁRted Along with wins for RRR, Aftersun, and Marcel the Shell With Shoes On.
workaholics 1:47 p.m.
So You Thought BTS Was Going on Break? LOL A guide to their solo projects and upcoming group activities (so far).
overnights 1:33 p.m.
Slow Horses Recap: Walk Into It After the combustible season-two premiere, “From Upshott With Love” taps the brakes a bit too hard.
the industry 1:13 p.m.
What the Holiday 100 Reveals About Our Love of Christmas Music It’s Mariah’s world (obviously) — but Ariana and Kelly are settling into it.
going analog 12:42 p.m.
Patti Smith’s Worldview Finds a New Format in the Beautiful A Book of Days The punk icon’s visual artistry is on full display in her new photography collection.
vulture 10x10 12:11 p.m.
The Monopoly Puzzle 15-Across, Six Letters: Setting of Bella and Edward’s first kiss.
rip 11:27 a.m.
Julia Reichert, Acclaimed Documentary Filmmaker, Dead at 76 Known for the Academy Award–winning doc American Factory.
video games 11:13 a.m.
The Callisto Protocol Ups the Ick The spiritual successor to the survival-horror classic Dead Space doesn’t let the dread build.
vulture lists 11:00 a.m.
The 13 Best Christmas Action Movies, Ranked For when you want fiery explosions with a side of holiday cheer.
last night on late night 10:44 a.m.
Greta Gerwig Thought We Paid Enough Attention to Her to Notice She’s Pregnant Rumors I’m pregnant? Yeah, I’m pregnant with #GG3.
profile 10:00 a.m.
Brace Yourself for Jordan E. Cooper’s Ain’t No Mo’ In his bawdy Broadway debut, no one is safe.
By Tirhakah Love
this week in late night 9:33 a.m.
Kate Berlant’s Broth Grift Won Late Night This Week Plus James Corden yelling (in a good way) and James Austin Johnson’s perfect Bob Dylan impersonation.
overnights 7:01 a.m.
Slow Horses Season-Premiere Recap: Cicada New season, new book (Mick Herron’s 2013 novel Dead Lions, the second in his Slough House series), clean-ish slate.
overnights 6:01 a.m.
Mythic Quest Recap: Failing Up Poppy Li is rightfully taking her place as the true series protagonist, but that leaves Ian feeling a little lost.
the grub street diet 6:00 a.m.
Andy Baraghani Likes Some Lumps in His Potatoes “This recipe has three kinds of dairy — labneh, cream, and butter — which I don’t think is overkill.”
By Alan Sytsma
songbird 1:19 a.m.
Stevie Nicks Memorializes Christine McVie, Her ‘Best Friend in the Whole World’ Mick Fleetwood and Lindsey Buckingham have also shared statements mourning their late bandmate.
army assemble 12:08 a.m.
Let’s Go, Indigo: RM Has Dropped His First Solo Album Also blooming into his new era with a “Wild Flower” music video.
trailer mix Yesterday at 9:52 p.m.
The Guardians of the Galaxy Vol. 3 Trailer Gets You Ready to Say Good-bye Director James Gunn got the gang back together for one last movie.
overnights Yesterday at 9:00 p.m.
Winter House Recap: Getting in Touch All this drama over an alleged attempt to touch Austen’s crotch? Sure. Okay.
More Stories