Boogie on down to the Hawkins National Laboratory for a celebration. (Or, more realistically, dust off your old Audio-Technica.) The soundtrack for Netflix’s summer smash Stranger Things — which was created by Kyle Dixon and Michael Stein, members of the Austin-based synth quartet S U R V I V E — is set to be released on vinyl on October 18 via Lakeshore Records. The double LP will house the soundtrack’s first volume only, and will come with a gatefold sleeve containing album credits and additional art. It now joins volumes one and two of the soundtrack that have already been released on streaming services. (No word yet on when the second volume will get the vinyl treatment.) Things is hot off the trail of two other special vinyl releases this summer, the equally-eerie Twin Peaks and the supercharged Drive. Toast up some Eggos, listen away, and check out the cover art below. 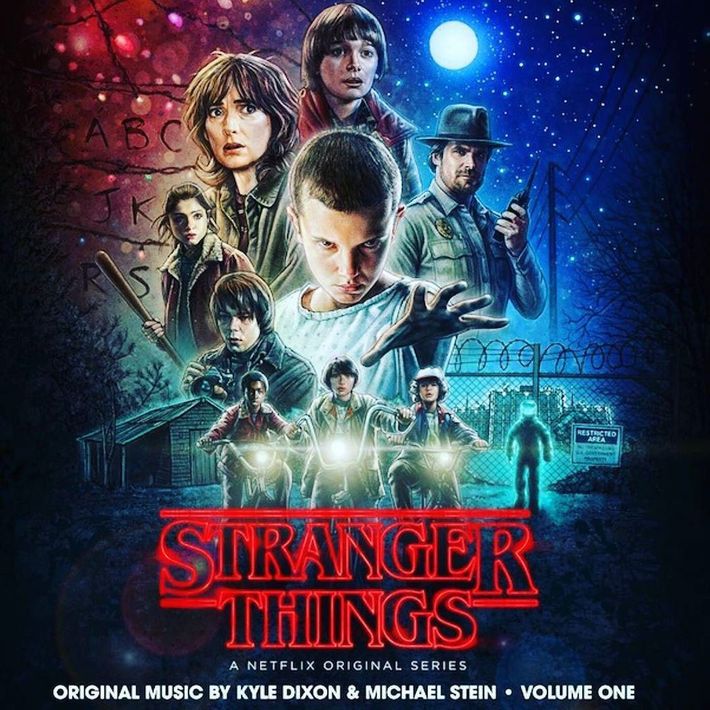 is this hell? 11 mins ago
Event Horizon Gets Better With Age Paul W.S. Anderson made a gruesome sci-fi film with mostly practical effects. 25 years later, he knows it looks terrific.
By Bilge Ebiri
shine bright like a diamond 2:04 a.m.
Ramy Steps Up To The Plate For Season Three Model Bella Hadid will make her acting debut in the new season.
2 fast 2 feud-ious 12:40 a.m.
Ryan Murphy’s Feud: Capote’s Women Adds Tom Hollander and Diane Lane The anthology series will take on Truman Capote and his “swans.”
wonderstruck Yesterday at 10:18 p.m.
Taylor Swift Wanted To Be in Twilight: New Moon This night is sparkling. Don’t you let it go, Edward!
overnights Yesterday at 10:01 p.m.
The Real Housewives of Dubai Recap: The Wicked Witch of the West This might be Caroline at her worst all season.
overnights Yesterday at 9:00 p.m.
The Real Housewives of Beverly Hills Recap: Disco Brawl Imagine a big conflict wheel spinning faster and faster, imaginary conflicts flying everywhere.
hush-hush Yesterday at 8:20 p.m.
HBO Max Has Been Taking Stuff Down Without Warning for Weeks Update: Another 37 titles will be cut.
mental health Yesterday at 7:49 p.m.
Jonah Hill Takes a Break From Press Tours Due to Anxiety He directed and starred in an upcoming documentary “Stutz.”
release your job Yesterday at 6:20 p.m.
Christine Quinn Is No Longer Selling Sunsets Seasons six and seven of the Netflix show will reportedly go on without her.
r. kelly Yesterday at 6:18 p.m.
R. Kelly Chicago-Trial Opening Statements Began With Harrowing Abuse Allegations Prosecution warned the jury that the videos in evidence will be “difficult to watch.”
coming soon Yesterday at 4:17 p.m.
Abbott Elementary Is Back in Session on September 21 And running through the whole school year with a full 22-episode season.
buzz! buzz! Yesterday at 3:37 p.m.
Who Manifested Simone Kessell As Adult Lottie in Yellowjackets? Looks like Courtney Eaton is now a series regular.
sweet! Yesterday at 3:04 p.m.
Ellie Kemper and Zach Cherry to Co-host The Great American Baking Show The Bake Off spinoff premieres in 2023.
overnights Yesterday at 3:02 p.m.
Love Island Season-Finale Recap: Ti Amo Somehow Luca and his ability to generate indignant fury out of thin air made it to the finale.
merrily we cast along Yesterday at 2:08 p.m.
Jonathan Groff and Lindsay Mendez Join Daniel Radcliffe in Merrily We Roll Along We hope the priest from Lady Bird will be happier with this production.
Yesterday at 1:30 p.m.
‘Foo’ or ‘Fool’? A Chat With the Cast of This Fool  A generational divide, explained.
christmas in august Yesterday at 1:27 p.m.
Darlene Love and Mariah Carey Are Battling for the Christmas Throne And so is Christmas-exclusive singer Elizabeth Chan.
overnights Yesterday at 12:53 p.m.
Reservation Dogs Recap: Hard Times Being physically present is not the same as “being there” for someone.
trailer mix Yesterday at 12:36 p.m.
Wednesday Teaser: The Addams Family Has Scholastic Problems and Spooky Solutions Jenna Ortega stars as the titular piranha-wielding teen.
read on Yesterday at 12:30 p.m.
Salman Rushdie Book Sales Soar Following Attack The Satanic Verses author has reentered best-seller lists while recovering.
More Stories