Ben & Lauren: Happily Ever After?

Somewhere in a well-appointed office in Burbank, a harried PR intern is scouring the internet. His brow is furrowed, sweat drips into his eyes as his gaze darts back and forth from the clock on the wall to his computer screen. The clock is like the sword of Damocles hanging over his head. He knows if he doesn’t find three positive quotes for a Ben & Lauren commercial by five o’clock, he needn’t bother coming in the next day. He needs this internship. His dad’s best friend got him this internship and he can’t let Mr. Anders down.

The intern feels himself sweat through his shirt and into his Express Skinny Innovator wool navy suit. He’s got to find a third quote. He’s got to fin — wait, there it is. A recap of the season premiere on Vulture. There must be something he can use. “What do those completely average, Kohl’s-wearing white people talk about at home?” No, not that. “Their foremost charisma-less Bachelor needed several more hours of exposure.” No. Not that. “Lauren also reveals that she didn’t know street sweepers were real. How did that happen? What system failed her?” Dammit. “Lauren replying, ‘Because I didn’t know you were allergic to coconut!’ This is gonna be one hell of ride.” Hold on … this might work. Just a little clip here and a cut-and-paste there.

“This is gonna be one hell of a ride.” Perfect, he thinks. 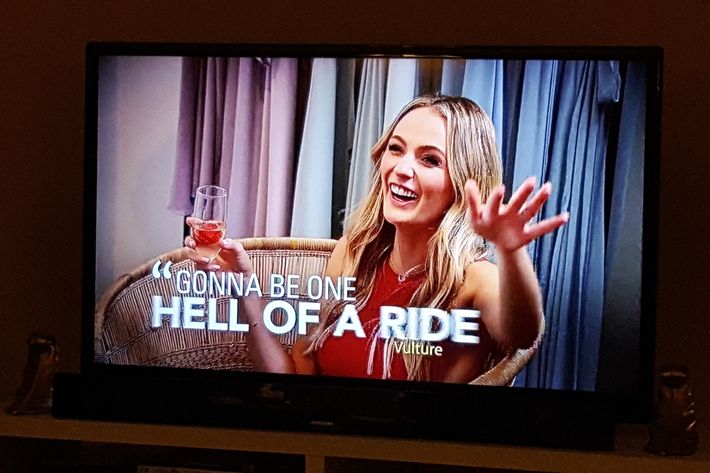 This episode also happened, which means we must continue to track a relationship between two human Pottery Barn catalogues as it deteriorates. Tonight, Oatmeal and Nickname TBD are trying to figure out big questions about the future: Where will we live? What will our careers be? How many times a week will we make ice cream? Here’s the answer to that last one. You’ll make it twice and never use the ice-cream machine again. Also, Nickname TBD reveals what she thinks the recipe for ice cream is. Ice and cream.

Nickname TBD wants lots of useless things on their wedding registry, which offends Oatmeal to his core. Why do they need a new bar cart? He painted a pile of trash and put a bottle of Smirnoff Ruby Red Grapefruit on top and called it a bar cart. Nickname TBD also decides that if they’re going to get a waffle-maker and an ice-cream machine, they’ll need a bigger house. So they pick Lace up on the side of the street in a baffling skirt-suit to go look at some houses. Thank goodness she was standing on that completely empty stretch of road nowhere near a producer or camera crew.

Suddenly, we’re in the middle of an episode of House Hunters. This would normally delight me, but Oatmeal and Nickname TBD are even more boring and vanilla than the usual House Hunters couples. Lace takes them to a three-bedroom, two-bath flophouse. Puddles of animal urine and fly carcasses litter the floor and Oatmeal calls it a real fixer-upper. Lace then takes them to a house that is weirdly decorated with all of their favorite colors and pictures of Nickname TBD when she was child. Nickname TBD falls in love with the house and gets out her checkbook to make a down payment. Oatmeal reminds her that she doesn’t have a job because she quit being a flight attendant because she was being recognized so much it got in the way of her job. Nickname TBD is the Sully of flight attendants. Oatmeal has a minor emotional breakdown and calms himself down by making Nickname TBD call him “Daddy” and listen to a lecture about financial responsibility.

Nickname TBD decides it’s time to get a job because she should contribute money to her marriage. Our charming couple go out for a hibachi lunch to talk about her job options. I have a theory that they’re always sending Oatmeal and Nickname TBD to “entertaining” ethnic restaurants to counteract how boring and white their conversations are. Try to make that into a pull quote, ya monsters.

Nickname TBD likes to cuddle with animals, so her first job option is to open a shelter. That ol’ money-spinner: animal shelters. She decides to try a day at the zoo as a zookeeper. Not to be left out, Oatmeal tries his hand at being a hibachi chef because, fuck it, why not? Neither goes well. I’ve never seen a TV show censor animal poop with a poop emoji before. More forced whimsy from Ben & Lauren.

Nickname TBD decides she wants to be a lifestyle blogger because she’s thin and blonde, I guess? She already owns all those Danish leather flats and rose-gold succulent planters. Oatmeal offers to take pictures of her in their backyard and — surprise, surprise! — they’re terrible. Nickname TBD burns the midnight oil writing post after post about her minimalist tote bags and brow gel.

Can we just pause and think about how launching a lifestyle blog by someone with little to no writing or beauty-industry experience is seen as a surefire way to earn enough money to buy a house?

The day has come to launch Nickname TBD’s blog. It is called Wearing Pastels in Fields, and she’s flying to Los Angeles to host a party for other women in Madewell day-to-night eyelet dresses in the blogging industry. The blowout bar nearest the restaurant was slammed. Oatmeal offers to do Nickname TBD’s makeup to help her. This literally could not be a less helpful thing for a partner to offer. He stands behind her when putting on her mascara. I’m horrified.

Thankfully, Nickname TBD has her Glam Squad coming. You know, because every unemployed flight attendant has a Glam Squad. The party is a success, but Nickname TBD is riddled with anxiety that her blog won’t be a hit. ABC will not let that blog fail. If necessary, ABC will hire a gang of Russian trolls to populate the comment section asking if a center or side part is sultrier. Oatmeal is absent from the festivities and Nickname TBD is shit-talking him when he rolls in with her mom and brother, two people who speak zero words on camera.

After the party, the blog is … an overnight success. What a surprise! Now that Nickname TBD has a job for like six days, it’s time to focus on the wedding again. The couple goes to a vineyard to take pre-wedding photos. Oatmeal has another mini-meltdown because he doesn’t know what they’re going to do with these photos. They go to some cake tastings and Nickname TBD suggests they try some coconut cake and she doesn’t know that coconut will kill Oatmeal. He’s ALLERGIC, Nickname TBD. Maybe they should just, like, call this whole thing off. He can’t eat coconut, so what’s the point? He lets off some steam by going to the batting cages with his friend Matthias (who I don’t think plays for any major sports team, so he must be a second-tier friend). Oatmeal admits that he’s not connected to the wedding planning and Nickname TBD is asking for so many things, like a place to live and a wedding. He doesn’t even know what a wedding registry is. He might be getting cold feet. And on that note, Ben & Lauren: Happily Ever After? will be back in two weeks with a two-hour special event.