Internet fame can strike where you least expect it — for example, off the coast of Miami. One harrowing night, DJ Khaled got lost at sea on a Jet Ski on his way home from visiting fellow Miamian Rick Ross and decided, like a true social-media guru, to Snapchat his way through the anxiety. Vlogging the crisis came to be the first of Khaled’s many major keys to success, each humorously laid out in his debut memoir, The Keys, out tomorrow. You know the Jet Ski story because, if you were one of the millions following his snaps that night, you saw it happen live. Now, in the first excerpt from his book, Khaled reveals the surreal days that followed the Jet Ski saga.

I call my fans Fan Luv because that’s the feeling I get when they’re around — love. For real. Fan Luv is a definite blessing, and loving Fan Luv is a major key. For me, it’s an easy key, because that’s just my personality. I love meeting new people. When Fan Luv happens, I’m just grateful. It doesn’t matter if I’m in a meeting or I’m in a restaurant eating; if you try to meet me, I will try to meet you. Everybody needs inspiration, and my inspiration is life, but it’s really my fans and my family who inspire me to go hard. Every time I see Fan Luv it’s a reminder to go in. And I want them to do the same. Fan Luv is everything to me, for real. That’s always been the case, but these past few years I’ve come to understand how powerful Fan Luv can really be.

The thing about me is that I’m usually on the road every year from February until November. That’s the life of a DJ and an artist and it’s been my working life for about as long as I can remember. When we’re just on the road — hustling, touring, being in the studio, making albums, dropping records—the months take on a certain rhythm and the cities and states blur by. Every year we do it again, just bigger, but I make it a point to be home for the holidays. My birthday’s during Thanksgiving time (shout-out to Sagittariuses!) and usually the buildings, meaning the executives and the music labels, shut down from around Thanksgiving to Christmas. So I come home and chill.

This is when I just do me — working in the studio, spending as much time as possible in my musical garden, lounging in the hammock, and for the first time last year I was Snapchatting. Snapchat is a major key and a game-changer, but what I like about it most is that it’s not about the angle or editing or lighting or how good you look, it’s just you for ten seconds being real with your fans. 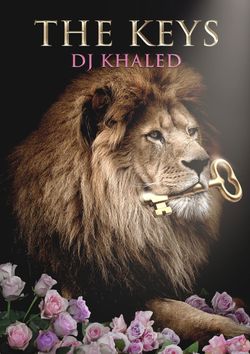 So I’m Snapchatting, vibing, and people are hitting me up with feedback like, “Yo, Khaled, I love your Snapchat!” I even get a call from Ed Sheeran. He’s like, “Lion!” Just saying lion into my phone, and I’m like, “Oh, Ed, word. You know about that lion.” And he’s telling me he loves my energy, and I’m like, “Thank you, I appreciate it.”

One day I’m out there Jet Skiing because I love the ocean. Since Rick Ross lives nearby on the water I go over there on my Jet Ski for lunch. We’re having a good time, but when I start heading back to my house I realize it’s getting dark. Before long it’s pitch-black and I get lost. I’m just out there by myself, using the light on my phone to see. Meanwhile, I’m keeping my sense of humor and Snapchatting because I’ve got to stay focused and because I won’t lie to you, I was getting a little scared.

Major key for real: Don’t drive your Jet Ski in the dark.

Finally I make it home, God bless, and my phone’s acting crazy. Of course it broke because of all that salt water getting into it. So the next day I go to the Apple Store in my swim trunks and my flip-flops and since I’m DJ Khaled, I get love. People ask for pictures and autographs, and I’m blessed to have that in my career, but while I’m at the Apple Store getting my phone fixed I turn around to take a snap and realize that the whole mall is crammed inside the store with me. This was my first time coming out of the house because I was on some hibernation vibes, so I thought this was strange. I’m wondering what’s going on and looking around thinking Justin Bieber is in the store or something. But then a few kids start talking to me and then a few more and I figure out that it’s Fan Luv, but just with a new kind of energy. There were just so many of them, and they had all been watching my Snapchat. Come to find out some of them even hit up the coast guard to call a search party for me. All these people were saying my name and calling themselves “Fan Luv” and they’re talking about my flowers and my Jet Skis and I’m just blown away.

Still, that was home, and I’m used to a certain amount of attention in Miami, so it wasn’t until I went to Vegas to DJ at Tao for New Year’s Eve that I knew things had really changed. I don’t fly, so I get there on my tour bus and I get up to the hotel and I walk into the lobby and a few people are like, “Yo, Khaled! Yo, Khaled! Yo, Khaled!” and I’m like, “Love. Love. Love,” just giving pounds and walking through because I’m exhausted. I go to my room to sleep and don’t really think anything of it.

When I wake up, I’m like, “Let’s go test this vibe; I’m in Vegas.” So I come downstairs and there’s a huge crowd of people by the elevator; I just walk through and the owner of the club is like, “Yo, you can’t come out here.” And I don’t get it. It was my second year doing this event so I just look at him like he’s confused and keep it moving. That’s when — boom — I see it. It’s just a wall of Fan Luv. Just a whole sea of people wanting to meet me and I’m just humbled by the intensity of their love.

I tell people all the time that Snapchat changed my life. I’ve been on the covers of business magazines and on talk shows about it. Tech people ask me how it is that I became such a huge force on the app but what I need everyone to overstand is that social media is nothing without people. It’s not that Snapchat changed my life, Fan Luv changed my life. That’s why no matter what I’m doing, where I go, or how big I get, I will never take Fan Luv for granted. My team gets on me all the time because I take so long getting from place to place because I’m shaking as many hands as possible and taking as many selfies as possible, but I can’t stop. Some of my closest friends think I’m crazy for letting Fan Luv into my life but I just remember that Fan Luv helps me. When I was lost — literally lost — they gave me strength and guidance. How can I ever forget or be ungrateful about everything they’ve done for me? So I love Fan Luv and will always love Fan Luv. There’s no other way. So don’t ride your Jet Ski in the dark, but if you do, make sure you have your phone because that flashlight is a key. But the real major key? Make sure you’ve got good people looking out for you.

Reprinted from THE KEYS by DJ Khaled. Copyright © 2016 by Serious Promotions, Inc. Published by Crown Archetype, an imprint of Penguin Random House LLC.