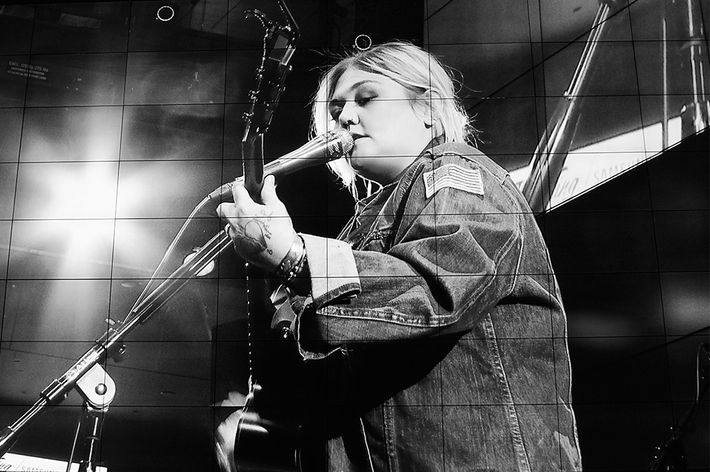 On December 2, bluesy rocker Elle King screened her new virtual reality film, Up Close and Personal, to an intimate crowd at meatpacking district “tech playground” Samsung 837. The short film, shot using the Samsung Gear 360 Camera, is true to its name: King opens up, sharing her struggles with body image and her path to self-acceptance. (“I learned to find beauty in the differences of the world. I don’t look like most people. I don’t sing, walk, talk, or act like anybody else,” she says in the video.) The 27-year-old musician also tackles lighter, but still ultra-personal topics, like her 40-something tattoos, and her relationship with her fiancé.

After the screening, the audience removed their Samsung Gear VR headsets and King took the stage IRL. The eight-song set capped off with her breakout hit, “Ex’s & Oh’s.”

Just before the event, we chatted with King about what it was like to get truly “up close and personal” – and via VR, nonetheless. 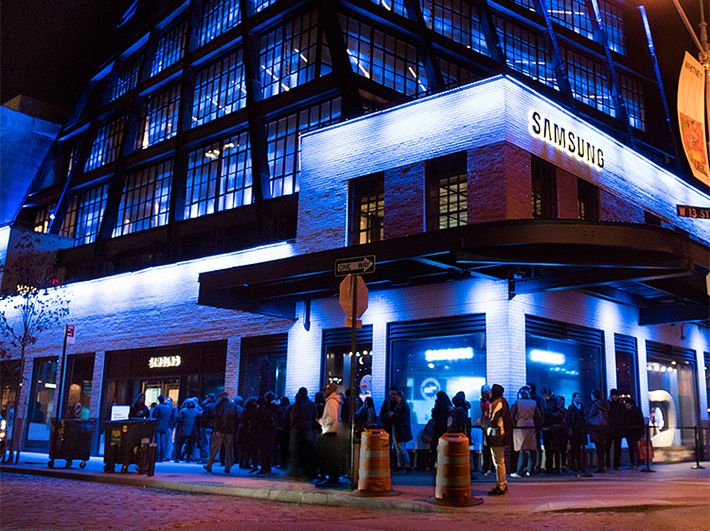 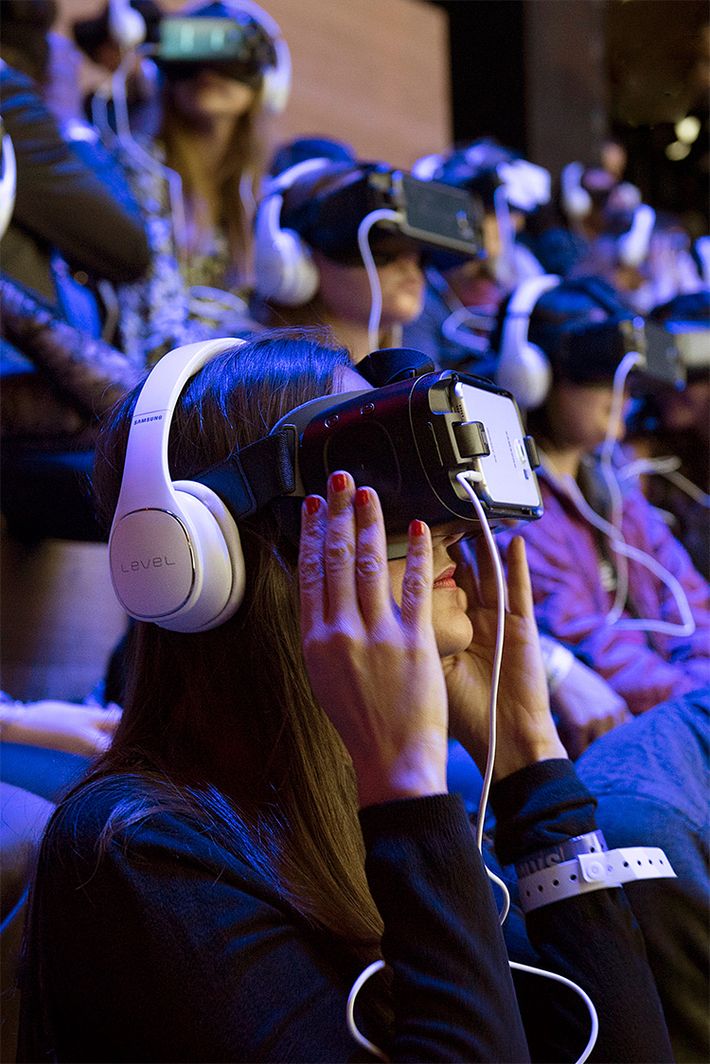 Tell us about the process of filming Up Close and Personal.

It was definitely a new experience for me. They used a camera that I’d never seen before; it looked like a disco ball. No one could be in the room because there were like 12 cameras going, and they would capture everything. I was totally out of my element, but it was cool because in a weird way, that’s what they were trying to do. Not that they were trying to take me out of my element, but I don’t usually talk about things like this … it was new to me all around. 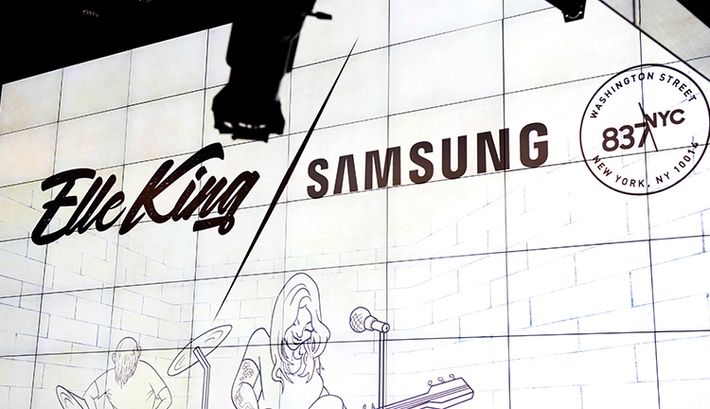 What was it like for you to experience the finished product via VR?

It’s weird, and it’s especially weird because it’s me, but it’s such a cool thing. You literally look all around … you follow it with your eyes. I’m just so amazed by what technology can do. It’s so beyond me as a person; I don’t even have a computer. It’s mind-blowing. 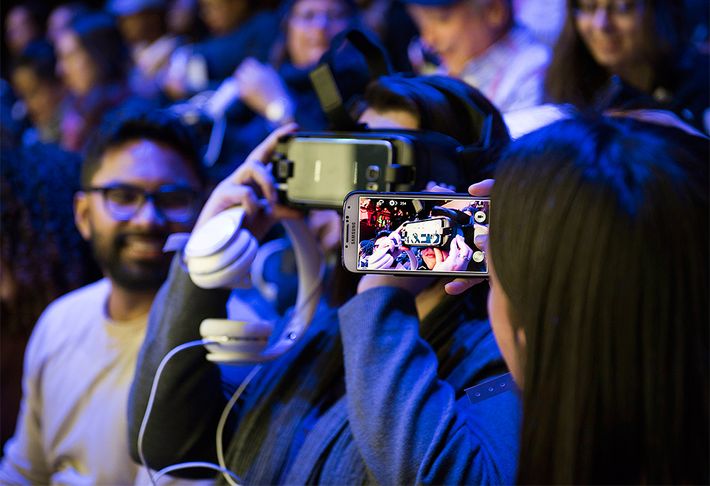 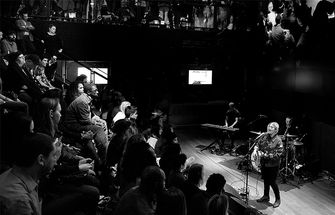 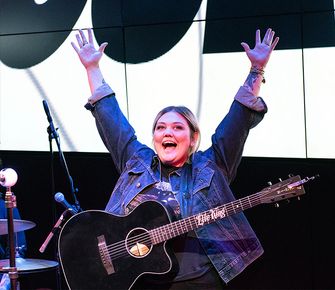 You opened up quite a bit in the film. Was it difficult for you to be so open with your fans, or is that something you’ve become used to in your career?

I’ve always been more comfortable sharing the bad, funny stories, and I’ve always been really open about that, probably to a fault. When it comes to sharing things like this about image – things that are more intimate – it’s a little uncomfortable, but I think it’s very important. It’s important for people to see, and it’s important to be vulnerable and to be open and to be honest. That’s how people make connections … I feel like a lot of times, people in music or movies or in this industry in general can be put up on a pedestal, so it’s important for people to feel relatable.

What are you looking forward to most about tonight?

I want my band to see the film, and I want to see them with the headsets on. It’s really funny, and I hope to film them doing it. Earlier, I had one on and my band came in and they were tapping me, and I was like, “Who’s in here?!” I hope to get them back in a very weird way.

hospitalization Yesterday at 10:41 p.m.
Travis Barker Has Been Hospitalized His new wife, Kourtney Kardashian, is by his side.
pilot pick ups Yesterday at 9:15 p.m.
Freeform’s AZNBBGRL Finds Its Baby Girls From The Flight Attendant’s Natalie Chaidez & Wu-Tang: An American Saga’s Dinh Thai.
overnights Yesterday at 8:27 p.m.
Money Heist: Korea Midseason-Finale Recap: Hostage Check Part 1 arbitrarily ends with plenty of questions and the standard Money Heist cliffhanger.
overnights Yesterday at 8:00 p.m.
The Bear Season-Finale Recap: Let It Rip The crew starts a new chapter as they reconcile with the pain from the past.
overnights Yesterday at 6:53 p.m.
Money Heist: Korea Recap: Inside Man The Professor is on the run from Woo-jin.
tv's nicole kidman Yesterday at 6:27 p.m.
Nicole Kidman to Make Heartbreak Feel Good in a Place Like Your Home Baz Luhrmann is reworking his 2008 movie, Australia, into a miniseries.
shady Yesterday at 6:12 p.m.
Dakota Johnson Calls Fifty Shades ‘Psychotic’ ‘Big Naked Movies’ “I haven’t been able to talk about this truthfully ever.”
overnights Yesterday at 6:04 p.m.
The Bear Recap: Are We Good? This episode lasted just long enough for the Beef to completely implode.
switched on pop Yesterday at 6:00 p.m.
The House Music That Beyoncé Built  Her new single, “Break My Soul,” taps into the genre’s long, vibrant history.
reset point Yesterday at 5:48 p.m.
7 Big Questions About That Umbrella Academy Ending The Hargreeves siblings may be cool with simply accepting this new reality, but the rest of us have some follow-ups.
crisp rat Yesterday at 4:38 p.m.
Chris Pratt Is Not a Chris(tian) Update your Hollywood Chris rankings, folks.
stand-up Yesterday at 4:31 p.m.
This Weed Joke Is As Potent As Today’s Weed Comedian Ralph Barbosa’s Don’t Tell Comedy set sneaks material about guns and taxes into clever jokes about weed.
coming soon Yesterday at 4:16 p.m.
HBO Orders True Detective: Night Country to Series True Detective will be back on your TV, because time? She’s a flat circle.
overnights Yesterday at 4:03 p.m.
The Bear Recap: A Delicate Ecosystem Because what Chicagoan hasn’t been at a bar at 6:45 a.m.?
oscar alert! Yesterday at 3:00 p.m.
Billie Eilish Can Vote at the Oscars If She So Chooses But would she have voted for Judy Garland over Grace Kelly in 1955?
vulture lists Yesterday at 3:00 p.m.
7 TV Comedies You Can Safely Recommend to Your Parents They’ll tell you how nice these shows are at your next FaceTime.
dancing through life Yesterday at 1:14 p.m.
Britney Spears Remembers Conservatorship ‘Restrictions’ During Vegas Residency She once had to ask for a doctor’s permission to take Tylenol.
delicious bits Yesterday at 1:10 p.m.
A Deep, Sticky Dive Into John Early and Kate Berlant’s Hot-Caramel Joke Caramel is the new crypto in their special, Would It Kill You to Laugh?
By Rebecca Alter
the baz of it all Yesterday at 1:09 p.m.
Counting the Baz-isms in Baz Luhrmann’s Elvis Baz Luhrmann can do many things, but he cannot do less — especially not in Elvis.
overnights Yesterday at 1:08 p.m.
Money Heist: Korea Recap: Running Scared Money Heist: Korea brings its K-drama bona fides in the most romance-forward episode yet.
More Stories