After Amazon announced last year that it acquired a new motoring show from former Top Gear hosts Jeremy Clarkson, Richard Hammond, and James May, the requisite questions immediately emerged: How exactly would The Grand Tour be structured? What would they be allowed to keep from the BBC? And would it still, you know, mostly be a car show?

“We couldn’t obviously take the name Top Gear. We couldn’t have the Stig, the Cool Wall, Star in the Reasonably Priced Car, we couldn’t use our old track,” James May told Vulture last month. “But we didn’t want to use any of those things. Even if we’d been able to, we would’ve still said, ‘No, we’ve done this thing before, let’s think differently.’” With The Grand Tour five episodes deep and comfortably settling into the swing of things, Vulture decided to take a closer look at the key differences between these two competing motoring shows. Rather than wax poetic about the cars — nothing has changed with the reviews and adventurous road trips, don’t worry — this list specifically focuses on the formatting, personnel, and aesthetic deviations that The Grand Tour has to offer.

The Grand Tour trades in the long-used theme music of “Jessica” by the Allman Brothers Band for an original, twangy score cue composed by Paul Leonard-Morgan called “Grand Tour Theme.” The opening title sequence itself is simple — it showcases various modes of transportation — but it changes every episode to also include short video clips of the traveling tent’s location that week. Additionally, the general color scheme of the titles has changed from Top Gear’s common blue, black, and white to orange, white, and black.

The special traveling tent is the crux of The Grand Tour — as you might guess from the name — since the show eschews an industrial Top Gear hangar in favor of filming in a new international location every week. (A handful of this season’s locations include Nashville, Dubai, Johannesburg, and Loch Ness.) The large tent is certainly more akin to “glamping” than roughing it in the wilderness, as it easily fits hundreds of people and is filled with luxurious furnishings. Arguably the most unique part of the tent is the window behind the hosts’ desk area, which showcases a distinctive view of each city they visit.

It’s not a race circuit. It’s not an airfield. It’s not a road. It’s …. the Eboladome. The Grand Tour notably deviates from Top Gear’s airfield track at the Dunsfold Aerodrome in Surrey by using the Ebola-virus-shaped former RAF Wroughton in Wiltshire, England. (Interestingly enough, the large complex currently houses a science museum.) Although RAF Wroughton has an airfield that could easily double as a track, the show’s test track was created to go through unfamiliar and extremely dangerous sheep-grazing terrain instead. In the first Grand Tour episode, Clarkson guided us through the track’s peculiar shape, which was purposely designed to bring out the faults in cars:

First up it’s the Isn’t Straight, so called because it isn’t straight. There’s a super-fast left followed by a super-fast right, and if you make a mistake there’s no run-off area or Armco. It’s just woods. Woods that are full of wildlife, which likes to run out in front of you. After the second right on the Isn’t Straight, we’re into Your Name Here Corner … towards Old Lady’s House. We’ve called this section Old Lady’s House, because it’s right next to a house where an old lady lives … next up, there’s a narrow and bumpy sprint to Sub Station. You need to get this 90-left right, or you’ll crash into a cage full of electricity. And you’ll need to get the final 90-left right as well, or you’ll run into a field of sheep. So, trees, animals, a house, electricity, and because it’s in England, usually quite a lot of moisture in the air. It really is the most dangerous track anywhere in the world.

The car currently on top of the lap board is the Aston Martin Vulcan with a time of one minute and 15.5 seconds.

Give a warm hello to NASCAR driver Mike Skinner, a.k.a. “The American,” who’s serving as the show’s communist-hating, fully transparent test-track driver. (No more full-faced helmets!) In the first episode, Clarkson explained that Amazon insisted that the show’s racing driver be from America, so they acquiesced to the request. Skinner will be timing all cars this season at the Eboladome.

Will a celebrity ever survive the trek to The Grand Tour’s tents? A few well-known guests — including Jeremy Renner and Simon Pegg — have briefly appeared on the show with the intent of partaking in a silly new game called “Celebrity Brain Crash,” except they never actually make it to the tent due to, well, “dying” en route. (In the third episode, for example, a short clip shows Pegg meeting his maker by falling off a drawbridge into a harbor in Whitby while eating a Cornetto.) Only time will tell if a celebrity ever gets a proper sit-down interview, but in the meantime, these goofs serve as comic relief and a subtle jab to Top Gear that celebrity interview segments aren’t needed to sustain the show’s buzz.

Check your mirrors and make a smooth left into Conversation Street. Talking about timely car news can’t be altered much, so The Grand Tour decided to create a proper segment with a cheesy, jazzy opening. If it sounds inherently goofy, of course is it — Clarkson could barely suppress his laughter when he saw the graphics in the first episode.

The lap board has gone electronic! Instead of Clarkson’s customary practice of writing lap times on a white magnetic slip and sticking them on the Power Board, the new and improved board is now fully electronic — and automatic — with complementary shades of black and orange to boot. 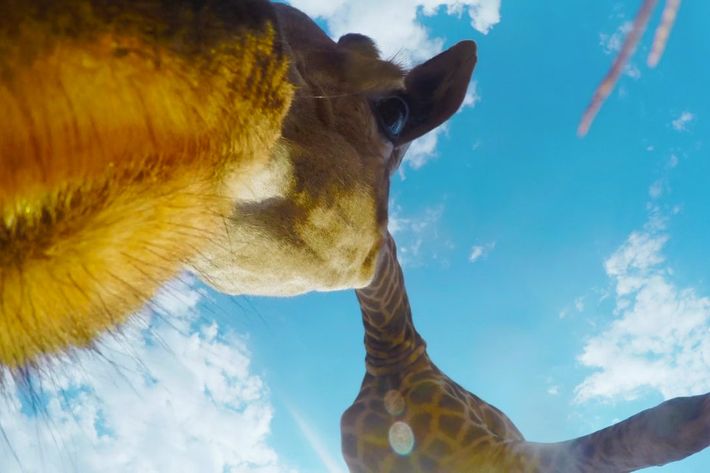 Okay, so Top Gear never exactly devoted itself to drones, but the running gag of the official Grand Tour drone being accidentally shot down in every episode is pretty amusing.