My Week in New York: A Saturday newsletter from the Editors.
Sign Up
|
We’re having déjà vu. Photo: Jeff Kravitz/Getty Images for The Meadows

Here we go again: It appears J. Cole might close out yet another year with a surprise album. A new album, 4 Your Eyez Only, has popped up for pre-order on iTunes with an expected release date of December 9, two years to the day that J. Cole last surprise-dropped an album. It’ll reportedly have ten tracks, but that’s the only detail we know so far; a representative for J. Cole could neither confirm nor deny the album’s existence to Vulture. 2014’s 2014 Forest Hills Drive famously went platinum with no features (you know the meme) and became the biggest-selling rap album of that year in just under a month. In the ultimate troll, this album will have ten songs all featuring Kendrick Lamar and will go diamond. You heard it here first. 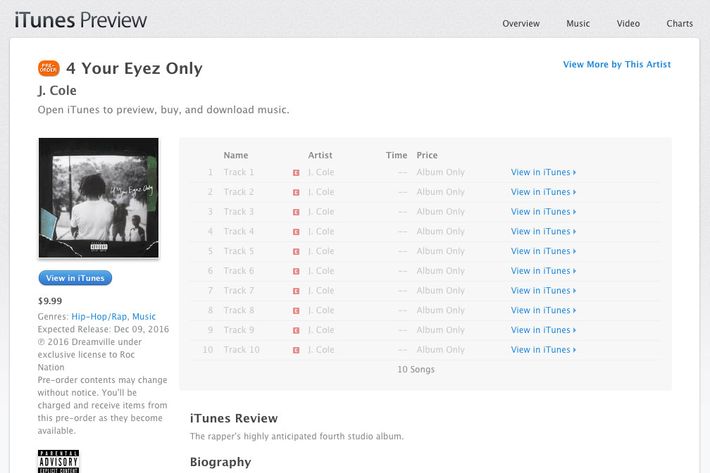 late night 3:27 p.m.
A Little Late With Lilly Singh Is Coming to a Little End Singh will move on to develop other projects at NBC.
tv review 1:55 p.m.
Welcome to Ziwe’s House. Make Yourself Uncomfortable. Ziwe Fumudoh’s interview show makes the jump from Instagram to cable in characteristically iconic fashion.
bad vacations 1:39 p.m.
The Story of a Three-Day Pass Is Also the Story of a Failed Black Escape Melvin Van Peebles’s New Wave debut still carries its sting of racial melancholy and calls for us to rethink institutional validation.
behind the seams 12:30 p.m.
The Making of a Legendary Look Designer Johnny Wujek breaks down what goes into creating the dozens of jaw-dropping looks that parade down the runway each week.
renewals 11:53 a.m.
Sanditon Renewed for Two More Seasons, Proving That Love Can Win After All Now wipe that ending from your memory.
best of 2021 11:46 a.m.
The Best Books of the Year (So Far) The slate for 2021 — of fiction and nonfiction alike — is bursting with vibrancy and verve.
By Hillary Kelly
oral histories 11:00 a.m.
The Oral History of Madonna’s Truth or Dare Madonna’s seminal 1991 documentary had few precedents. That’s why it can’t be replicated today.
By Matthew Jacobs
nfts 10:38 a.m.
Unreleased XXXTentacion Songs to Drop As NFTs They’ll mark the first music to be posthumously released in the format.
quelle surprise! 10:23 a.m.
Jack Davenport, Jim Broadbent Will Get Their 10 Percent in Call My Agent! Remake With several A-listers set to make cameos.
good one podcast 9:45 a.m.
Vir Das Knows He’ll Be Arrested for a Joke Eventually  The Indian comedian joins this week’s Good One to offer a fresh perspective on “freedom of speech.”
By Jesse David Fox
overnights 9:00 a.m.
Younger Recap: An Affair to Remember Can Charles just stop being a ding-dong for, like, five seconds?
tv review 9:00 a.m.
Girls5Eva Is 2 Funny 2 Ignore The Peacock series about a girl group reuniting in middle age cranks out joke after joke about the ridiculous exercise that is show business.
broadway 8:00 a.m.
The Pop Queens of Six Will Start Belting on Broadway Again This September The pop musical was originally supposed to open the night Broadway shut down.
last night on late night 12:55 a.m.
Watch Joyelle Nicole Johnson Make Her Tonight Show Debut “I don’t want to see a meme, I want to see you stop drinking shower beers.”
last night on late night Yesterday at 11:17 p.m.
BTS’s J-Hope Does Not Know Who Conan O’Brien Is The tall late-night comedian is not named “Curtain.”
last night on late night Yesterday at 10:57 p.m.
Seth Meyers Uncovers the Real Problematic Ride at Disneyland We don’t even have time to get into the Tiki Room.
overnights Yesterday at 10:30 p.m.
The Real Housewives of New Jersey Recap: Undercover Lover The non-reveal of Teresa’s new boyfriend is the greatest disappointment in an episode full of them.
kung fu Yesterday at 9:05 p.m.
Kung Fu’s Showrunners on Crafting the Shared Tragedy of ‘Sanctuary’ “It was always very important to us that this not be an episode where Nicky Shen solves racism.”
overnights Yesterday at 9:00 p.m.
Kung Fu Recap: Solidarity A powerful hour centered on two concurrent social movements pulls no punches when it comes to heavy topics.
trailer mix Yesterday at 8:03 p.m.
The Rugrats Are Back and More CGI Than Ever in New Trailer The new series drops May 27.
More Stories