Pablo Larraín’s Jackie is one of the best films of the year, a bracingly visceral portrait of Jacquelyn Kennedy in the immediate aftermath of her husband’s assassination. But while much of the acclaim for the film so far has been rightly going to Natalie Portman’s searing portrayal of Jackie, the script, by first-time screenwriter Noah Oppenheim — who has a pretty good day job running NBC’s Today — is a pitch-perfect avalanche of one-liners and showdowns that paints a picture of Jackie so convincing it seems ripped straight out of history. And, in some ways, it was: Oppenheim based his writing on extensive research, archival material, and documents of how Jackie actually responded to the murder of John F. Kennedy. Vulture asked Oppenheim to walk us through five of the movie’s best scenes, explaining how he went about creating the version of Jackie that Portman then brought to life onscreen. 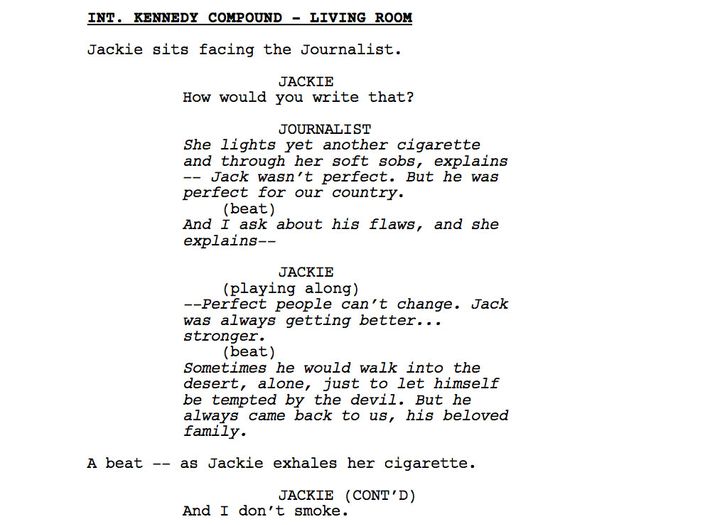 Jackie is talking to a journalist, played by Billy Crudup, for a story about how she handled herself in the wake of the assassination. The conversation is as much about them having the conversation as it is her experience of her husband’s death.

“One of the most extraordinary things about Jackie Kennedy is that she is the person who coined the Camelot mythology, a week after her husband’s assassination. That always struck me as an interesting cornerstone to build the story around: During that incredibly intense period where she’s grieving the loss of her husband, she’s dealing with the trauma of having been sitting right next to him when he was murdered, she’s shepherding two young kids through the loss of their father, she’s planning a funeral that the entire world is going to watch, she still had the presence of mind then to realize, I have to cement my husband’s legacy somehow. She comes up with this cultural reference in Camelot that ends up being more powerful than any list of policy accomplishments ever could be. I thought that was a stroke of genius, given the circumstances.

“In terms of what that interaction would look like throughout the film, it’s based on what we know of how she controlled her image and interacted with the press. We know that she was a smoker during her husband’s presidency, and yet she was never photographed with a cigarette — the public didn’t know that. We know that she actively edited her conversations with journalists, reporters, historians, that she would heavily redact things that she said and was very conscious of what ended up in the hands of the public. I tried to build a back and forth between her and this journalist based on that.” 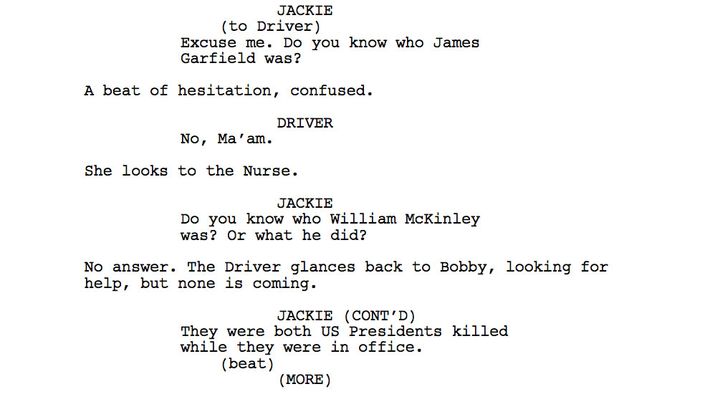 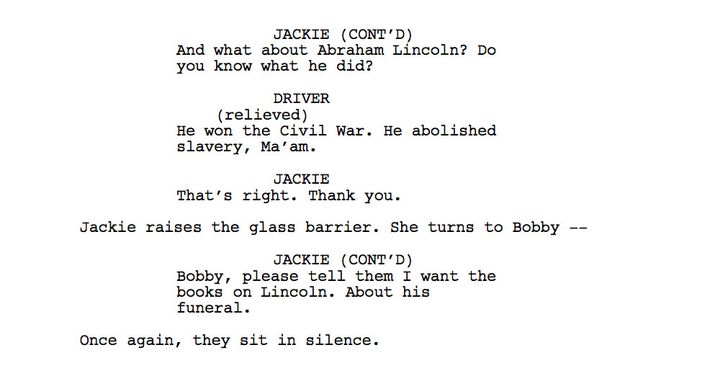 Jackie and Bobby Kennedy, played by Peter Sarsgaard, are riding with Jack’s casket. Despite her grief, Jackie begins questioning the driver and the nurse.

“The night of the assassination, Jackie asked that the books about Lincoln’s funeral be pulled from the Library of Congress. In fact, I believe it was closed, so there were literally people with flashlights sent to the Library of Congress to pull the relevant research material for her. She was aware very early that the way the funeral would be conducted would have an enormous impact on how people remembered her husband. In looking for a way to dramatize that impulse, you’re saying, Well, why was it so important to her to model it after Lincoln? And you realize that this country has lost presidents to assassination before, and not all of them are lionized and remembered in the way that Kennedy is today. Lincoln is. One could argue it’s because of Lincoln’s accomplishments in winning the Civil War and keeping the Union together and abolishing slavery, but I think in her mind, if she could link her husband to Lincoln in death, then hopefully that would elevate his legacy in the minds of the people. When she’s asking the driver and the nurse if they remember the other assassinated presidents, they say no. But of course, everyone remembers Lincoln, I was trying to dramatize her thought process in the moment to illuminate why it was so important to her that they model the funeral after Lincoln.” 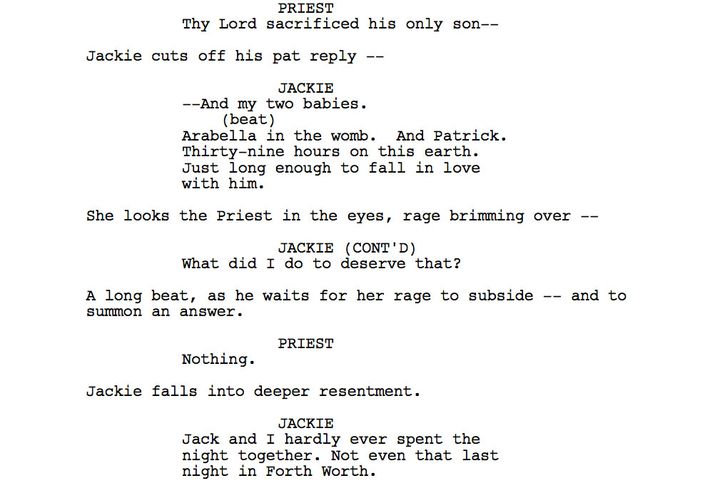 Jackie meets with a priest, played by John Hurt. She asks him about why God would allow the terrible things that have happened to her.

“The movie tried to show many difference facets of Jackie’s character and personality and the different faces that she presented to the world. In this conversation with the priest, I was trying to depict a more raw, unfiltered version of her. We know from research and from letters that have recently been uncovered that she wrote to various members of the clergy in the year after the assassination. She did descend into a pretty dark place; she was really grappling with her faith, her will to live, her sense of justice in the world. But when you’re depicting someone who’s going through a trauma, having a crisis of faith, and talking to a priest, there’s a high degree of danger that that can descend into cliché: the classic everything happens for a reason, it’s God’s will — those sort of pat consolations. I wanted to avoid that at all costs. I think in the interaction with the priest, you see a dynamic that’s different than you might expect from a priest who someone has come to for comfort. Part of that’s in the script, and part of that’s in John Hurt’s performance, which is really unique and interesting.” 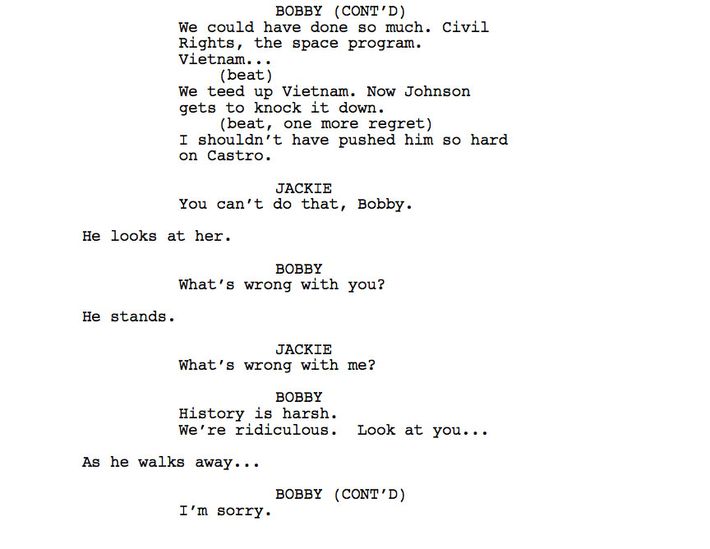 Jackie’s in the Lincoln Bedroom, and Bobby enters to tell her that it’s been decided, in the wake of Lee Harvey Oswald’s murder, that the funeral procession will ride in cars rather than walk with Kennedy’s body. They begin discussing the administration’s legacy.

“The relationship between Jackie and Bobby throughout the film is one of the most complicated relationships we were trying to depict. In some sense, the two of them are the only two people in the world who can understand what each other is going through. I think the loss to Bobby was almost as great, if not greater, than the loss for Jackie. On some level, they’re going through this very similar emotional crucible, and yet they have a very different set of concerns. Obviously, Jackie as the wife and a mom of her two kids is driven by a certain set of considerations; Bobby as a brother and as a political operative is driven by another. They’re the only two people who can really support each other , but they’re also not necessarily completely aligned at all times. In the Lincoln bedroom, the point I’m trying to drive home there is they’re both having this moment of mini-crisis in that they’re not sure if it’s worth the risk to her and her children to go through with an elaborate funeral procession, and she’s called it off. And Bobby is realizing that his dreams for his brother and their administration is slipping through his fingers — a lot of their work was left incomplete, and now he’s watching Lyndon Johnson, whom he hated, take over. He’s losing his place in the universe and wondering whether it was worth it, and what, in the end, they’ll have to show for it all.” 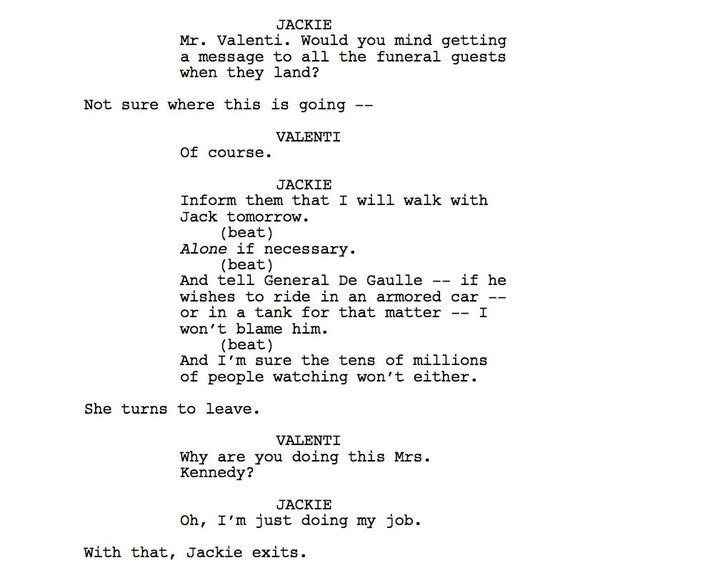 Jackie walks into the office of Jack Valenti, Lyndon Johnson’s close aide, and tells him she’s changed her mind about wanting to make the funeral more modest. When Valenti tells her that won’t be possible, she pulls out her trump card.

“There’s a number of things at work in that scene. One is the tension between Jackie and the incoming Johnson administration, which is rapidly supplanting her, through no fault of their own. It’s important to me that people not perceive Valenti or Johnson in any way as villains. The country had to move forward, and they had to assume power and take over the functioning of the government. They are just doing their jobs, and yet obviously, from Jackie’s perspective, she’s being pushed offstage and is resisting that. As a practical matter, holding this massive outdoor procession is insanity — at that time, they had no idea whether Oswald was acting alone or as part of some larger coup. The idea of this elaborate outdoor funeral seemed to many like a completely unnecessary risk. You’re seeing Jackie in that moment decide to assume that risk and take it on, and as much as Valenti’s job is to take over the functioning of the government and look out for President Johnson, Jackie saw her job as taking this last opportunity to celebrate her husband and protect his legacy.”