One of the many joys of Gilmore Girls is the endless stream of enjoyable cameos: The Bangles, Barbara Boxer, Norman Mailer. But perhaps the most beloved appearance is by rocker Sebastian Bach as hoagie-shop owner and Lane’s bandmate Gil. In the following excerpt from his new memoir, 18 and Life on Skid Row, out yesterday, Bach describes partying with Sally Struthers, getting recognized around the world, and how the show gave him a chance to meet one of his idols.

After Broadway, I got yet another surprising telephone call. From [agent] Barbara Skydel, again.

Telling me about a TV show called Gilmore Girls. My first response was, “What is that?”

She explained to me the premise of the show. A mother (played by Lauren Graham) and daughter (played by Alexis Bledel) struggle to make it on their own, in their hometown of Stars Hollow. Alexis puts together a band with her friend (played by Keiko Agena). I was to play the “hunky guitar player” of Lane’s band. Thus “Gil,” on guitar, was born.

Gilmore Girls is a big TV show that continues to play around the world to this day. It’s funny how I get recognized in different areas of the public. In certain parts of town, rock ’n’ roll bars, music stores, et cetera, I will get recognized for Skid Row. In Canada, I will get recognized for Trailer Park Boys. But in shopping malls across America? Museums in Italy, walking the streets of Europe or South America? If it’s a little girl, with her mom, I will invariably hear the following words: “Oh my God, it’s that guy from Gilmore Girls.” I was on the show for seven seasons, and very much enjoyed my time interacting with such a fun and talented cast and crew.

One of the actresses on the show was none other than Sally Struthers, who played Gloria on one of my all-time favorite TV programs, All in the Family. We had a wild night at her house, with me and my stand-in on the show, Kerry. Stoned out of my mind, I was staring at all the Emmy awards from her decades in the business. I remember Sally was laughing the whole time and it was really fun to party with Gloria. I almost felt like a Meathead myself that night. 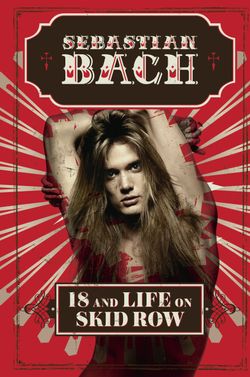 One of my favorite memories of the show was the day when Geddy Lee of Rush came to visit on set, with his daughter, who was a very big fan of the show. Kerry called me in my hotel room at the Sheraton Universal.

“Hey dude! You’re not going to believe who’s here to watch us today!”

Gives you an idea as to the scope of the show. I went down to the set, and there he was. The Voice of the Holy Triumvirate Himself. A Canadian Deity. He told us all that he and his daughter enjoyed Gilmore Girls very much, and he complimented me on my transition from rock ’n’ roll to television. “Seamless,” he told me. I beamed with pride. We had such a great time that day. Around dinnertime, I said to Geddy, “Hey man!!! Why don’t you and your daughter be in the show?” He started laughing, and said, “Oh, I don’t know, Sebastian. Let me think about it.” I ran over to Helen Pai, producer (whose name was an anagram for our band, Hep Alien). I said, “Oh my God, we have to have Geddy Lee on the show!!” I knew that Daniel Palladino, and Amy Sherman-Palladino, series creators and writers, would love it. (I had spent a booze-fueled night at the Rainbow with Daniel, talking about the day he first saw Rush, on their first-ever tour playing in the Los Angeles area, back in the ’70s.) She said, “Okay,” and we filmed a scene in which Geddy and I sang and played guitar. Sadly, when it came time to watch the episode, Geddy was barely noticeable in the scene. Which was a real shame. But it was so much fun hanging out with them that day and working together for an hour or two. It felt amazing to be on a television set with Gloria from All in the Family and the lead singer of Rush, all at the same time. Was this a dream I was living? Or what?