Though word was already out that U2 would be headlining Bonnaroo this summer in honor of the 30th anniversary of their album The Joshua Tree, today the festival revealed the rest of its 2017 lineup. And like always, it’s a doozy. This summer the Weeknd, Chance the Rapper, the Red Hot Chili Peppers, Major Lazer, the XX, and Lorde are just a few of the acts heading to Manchester, Tennessee. Check out the full list below. 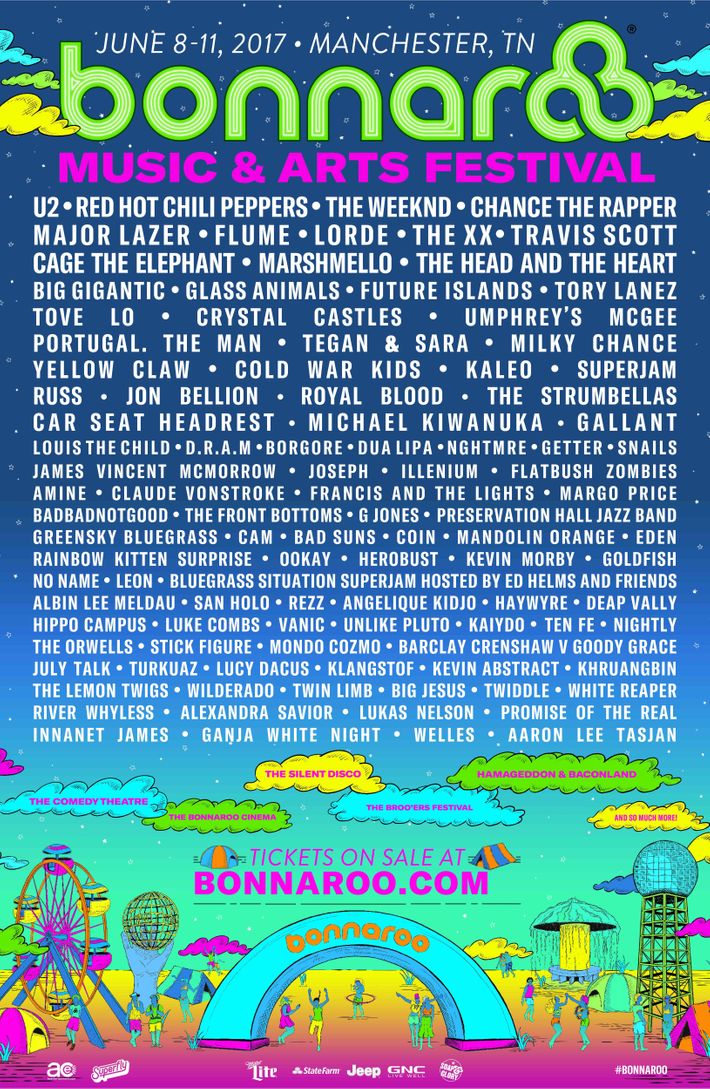 follow friday 9:51 a.m.
Yamini Nambimadom Wants a Monogamous Marriage With Her Bed We caught up with the comedian on Instagram Live.
video games 3:06 a.m.
Okay Villagers, Get Ready For the Animal Crossing: New Horizons Update A lot of new features are coming on November 5.
trailer mix 12:31 a.m.
The Doctor Who: Flux Trailer Serves Jodie Whittaker a Buffet of Baddies Including the Ood, Sontarans, Weeping Angels, and Cybermen!
#freebritney Yesterday at 9:11 p.m.
Britney Spears Says She’s Afraid of Making a Mistake Now That She’s Free She wrote on Instagram that the paparazzi seem to want to scare her into doing “something crazy.”
guess who's back Yesterday at 7:08 p.m.
Jennifer Coolidge Says Hi to Season Two of The White Lotus She’ll reprise her role as Tanya in the HBO series.
overnights Yesterday at 6:56 p.m.
Canada’s Drag Race Season-Premiere Recap: Coat Cheque After a controversy-filled offseason, Canada’s Drag Race is back with a new group of queens with incredible looks.
machine learned Yesterday at 6:24 p.m.
Should You Buy the New Roku Things? Answering the essential questions about the brand’s latest 4K Streaming Sticks.
comedy review Yesterday at 6:00 p.m.
Dave Chappelle’s Endless Feedback Loop The Closer proves the comedian is right about one thing: It’s time for a break.
By Craig Jenkins
industry drama Yesterday at 5:50 p.m.
The 2022 Golden Globes Are Happening Whether NBC Likes It Or Not The HFPA is going forward with … something on January 9.
tiny desk/big band Yesterday at 5:43 p.m.
Camila Cabello Performed a New Song With a Mariachi Band for Her Tiny Desk For her unreleased song “La Buena Vida.”
overnights Yesterday at 5:00 p.m.
You Recap: Where the Wild Things Are Joe’s weekend camping trip with the boys is a shirtless romp, and it’s insane that none of them end up kissing.
movie review Yesterday at 4:46 p.m.
The Last Duel Is a Bro-Down Epic With a Metal Heart It’s not so much a history lesson as it is a savage, beautiful catharsis.
on comedy Yesterday at 4:10 p.m.
Netflix Fires Alleged Leaker As Dave Chappelle News Cycle Continues “The only person who gets fired is the Black person who was quiet the entire time,” the employee responded.
haunted pixels Yesterday at 4:00 p.m.
When Video Games Feel Haunted: Inside the Low-Res Horror Boom Indie designers are conjuring meta-scares with fuzzy pixelated graphics.
injuries Yesterday at 3:58 p.m.
America’s Got Talent: Extreme Stuntman Suffers Near-Death Accident on Set Jonathan Goodwin was airlifted to a trauma unit after a rehearsal went dangerously wrong.
overnights Yesterday at 3:20 p.m.
I Know What You Did Last Summer Series-Premiere Recap The teen-thriller classic gets an update with a new twist that makes it equal parts spooky and serious.
overnights Yesterday at 2:47 p.m.
You Recap: Coming Out of My Cage Sure, Joe and Love kill people, but they don’t want to be “the kind of people who kill people.” You know?
book review Yesterday at 2:08 p.m.
Fear and Loathing in ‘Asian America’ In The Loneliest Americans, Jay Caspian Kang tries but fails to restore meaning to an empty term.
overnights Yesterday at 2:00 p.m.
You Recap: Search Party Can we make it through even twenty minutes of this show without a parenting cliche?
vulture lists Yesterday at 2:00 p.m.
Every Ridley Scott Movie, Ranked Sizing up the director’s decades-long career.
More Stories