For some reason, a conversation cartwheeled into my Twitter feed today with some people arguing that Drake is bigger than Nelly in his prime, and others saying the opposite, that peak Nelly was supreme to peak Drake. So who’s right?

A reminder: This argument does not matter. There’s not a single thing about it that matters. But there is an answer, and that answer is Nelly, and it’s not even close.

You should not waste much time thinking about this, so let me just quickly outline 697 reasons why Nelly reached heights that Drake can only dream of.

There’s the first album, Country Grammar, one of only eight rap albums to have sold more than 10 million copies. There’s the fact that I still remember the name of the guy in the St. Lunatics that wore half of a mask (Slo’Down) but am still not sure whether alleged OVO member “Roy Woods” is just Drake’s Chris Gaines. The band-aid on Nelly’s face was dumb, but not dumb enough for me not to put a band-aid on my face a few times even though my cheek was woundless.

Do you know how next-level you have to be to utter the phrase “Is that your ass or your mama half-reindeer?” and for us as a community to just let it happen?

Remind me, what was Drake’s double album called? Oh yeah, he never made one. And even if he does, I bet the title won’t be a compound word that shows he has an active side (Sweat) and a late-night sexy side (Suit).

There was “Grillz,” which was an underrated classic. There was “#1,” which I listened to before taking the PSAT. Remember when Drake tried to make “woes” a thing? That was kind of like a B-side version of Nelly saying “E.I.” and trying to make that a thing.

Question: How many Drake songs does your grandma know? I bet the answer is zero — “Charged Up” never really registered with the octogenarians. “Hot in Herre,” however? I swear I’ve heard that song at a baptism.

DO YOU REMEMBER THAT IGUANA ON THAT MAN’S SHOULDER?

HAS DRAKE EVER HAD A VIDEO WITH A MAN WITH AN IGUANA ON HIS SHOULDER?

Yes, because if there’s one thing Drake could never pull off, it’s talking about Shaun Haynes, Lashando, and JD. There’s D Quick, Boo Gees, and Fatty. Can’t forget about Lil’ Erv, Gino, Poochie, and all those great pals from Euclid and Labade.

Do you really think Drake would ever thank Young Big Touch, Pooh, and/or Baby? Rio, J.T., and Big Money?

In no universe does Aubrey Drake Graham even know anyone named Herky Jerk, and the same could be said for Wezz and Pea. The only Cody he knows is probably Agent Cody Banks.

I’m not even sure if JE, K-Ug, or Odie are humans, but Nelly still thanks them.

There’s more — including Yellow Mack, Cooter, and Coach — but the point is, Nelly shouted out every person he’s ever met on an album that went DIAMOND.

I could stop here, but there’s more. Like this photo:

There’s also the controversy that only comes with true fame. Yes, Drake and Meek Mill’s meme-fueled beef was huge news, but do you remember Tip Drill Gate? I do, and let me tell you — Nelly maybe should not have made that inappropriate-yet-fire song.

Yes, that’d be a video of Nelly working out with Mike Vick in the gym.

Have I cleared this up yet? Almost? Okay, here are seven more reasons and then I have to get back to work.

There was “Air Force Ones,” which in no way made the shoe popular, but came at a moment when everyone I knew was wearing white-on-whites, so the song felt like our autobiography. There’s the reality that Vokal was a very important brand at Marshalls and much more affordable than OVO. There’s the video for “Country Grammar,” which is a Top 5 bring-the-entire-hood-out-for-the-music-video moment. Also in that song, there’s the feat of saying “nigga” 14 times in seven lines, most notably in the transcendent phrase “O.K. Corral niggas.” There’s also the fact that Nellyville, his second album, was a slight disappointment, because it only sold like 7 million records.

Nelly was so big he named a song “Dilemma” and that word wasn’t even in the song.

And finally, Nelly was such a gigantic star that Kelly Rowland texted him on Microsoft Excel. 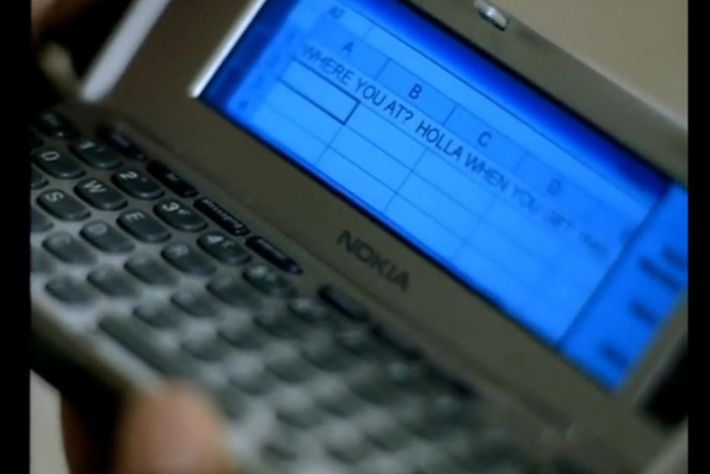 Great, that was fun. Everyone go back to whatever it was you were doing.

+Comments Leave a Comment
Discussion Over: Nelly Was Bigger Than Drake