Regardless of how you feel about HBO’s religious drama The Young Pope, the series is an undeniably sumptuous visual feast. Between the lush gardens, vibrant frescoes, and strikingly ornate Renaissance architecture, it seemingly appears that showrunner Paolo Sorrentino convinced Pope Francis himself to grant exclusive access to the highly guarded epicenter of the Roman Catholic Church. In fact, however, The Young Pope is a feat of incredible production trickery — despite the meticulous attention to detail, not one scene was actually filmed in or around Vatican City.

“Not shooting in the Vatican was a wonderful experience, something that turned a refusal into an opportunity,” production designer Ludovica Ferrario told Vulture by email. “The challenge, already at the reading stage, was staggering. Every scene required a remarkable visual commitment.”

According to Ferrario, requests for The Young Pope to shoot within the confines of Vatican City and at the pope’s sprawling summer residence in Castel Gandolfo were both denied. Instead, the prominent interiors — including the Sistine Chapel, the façades of St. Peter’s Basilica and St. Mark’s Basilica, the Sala Regia, and the Vatican Library — had to be reconstructed as faithfully as possible at the famed Cinecittà Studios in Rome, sometimes with the help of a visual-effects studio in London.

Exterior shots were a little easier to construct, and were filmed in several villas and public gardens around Rome. (For example, Rome’s Villa Pamphili provided an able stand-in for Castel Gandolfo.) “We tried to represent not only the monumentality of the Italian garden, but also the more natural portions of Vatican territory to convey its vastness, as these make up the largest portion of the papal state,” Ferrario said. “We had to carry out some remarkable gardening work to simulate the meticulous maintenance characteristic of the Vatican gardens and to be able to convey the various seasons.” In total, Ferrario used around 50 locations in Rome, Venice, and the region of Latium for the show’s ten episodes. 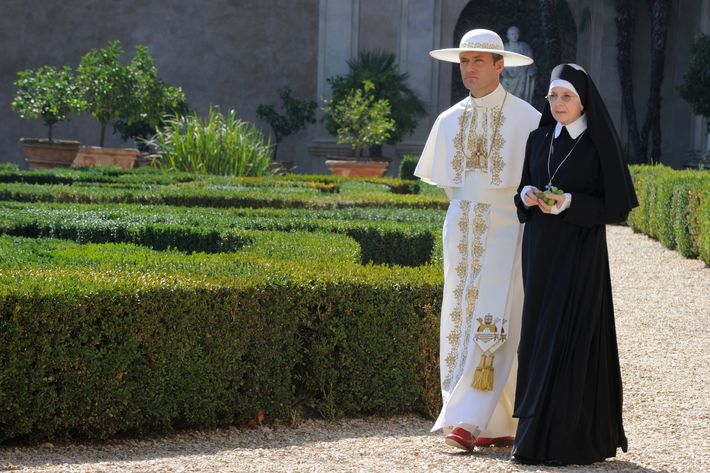 Reconstructing these locations was an arduous process, which took almost a year of research and intensive planning. (A religious consultant was also on staff to assist with the appropriate use of props.) The way Ferrario and her team approached designing the Sistine Chapel and the Sala Regia served as a starting point for how they chose to tackle the rest of the sets. “It was extremely interesting in terms of deciding the dimensions, the mode of construction, the materials to use, the work of the decorators and painters, and matching it all to the furnishings,” she explained. “I opted for a full-scale approach. This was because of the environment — its grandiosity and its being representative of power — required for the story. I wanted to allow Paolo to film without feeling the burden of the hand that would then intervene in post-production.” The many frescoes were achieved by using wallpaper, while the illusion of smooth marble flooring was made possible by printing color on treated plywood. A special gloss, meanwhile, brought meticulous gold plating and gold leaves to life.

The biggest challenge Ferrario faced was staging these sets so close to the “collective imagination” but also allowing for a mix of the known and unknown. A perfect example of this, she said, is the Vatican Library. “Its construction was a very faithful reconstruction, to the point of reproducing the same paintings, the same bookshelves, and curtains,” she explained. “But also indulging in the liberty of adding invented elements to the scene, like the Venus of Willendorf, the plexiglass globe, and the carpet with the papal coat of arms.” In the end, Ferrario’s top priority was to ensure The Young Pope appeared credibile to its audience. “I must say the opportunity lay precisely in playing within the confines of a balance between verisimilitude and philology,” she said. “Whether realistic or not, the important thing is for the whole thing to be plausible.”