At 12:36 p.m., Wednesday, January 11, the same day as Trump laid down an almost Stalinist fist at his first press conference since the election, an artist took to Twitter to take what feels like the inkling of an effective action — against the Trump family. A teeny thing felt deeply resonant.

That afternoon, well-known artist Richard Prince posted a work of his own to Twitter — one of his “Instagram” portraits, each essentially an inkjet picture of someone else’s Instagram page (many of them are of young women posing semi-clothed). Each of the canvases measures about six-by-four feet, and when they were first exhibited, in 2014 at Gagosian Gallery, they triggered waves of internet hate: Prince, who had made his name as an appropriation artist in the 1980s, was called a fake, a flimflammer, a voyeur, a dirty old man, twisted, perverted, and more. The “portrait” he posted Wednesday was of Ivanka Trump — the first daughter taking a selfie in front of a mirror, having her hair and makeup done, and wearing an almost-open robe. 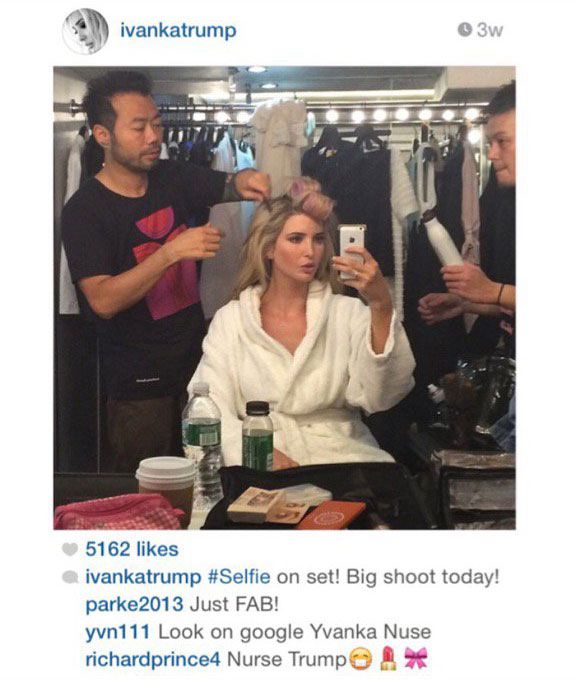 In the weeks before the election, it’s important to note, it had come to light that the Kushner-Trumps are collectors of contemporary art — surely this had been known by some in the art world before, but in the fever of the election the fact spread like a scandal. In their collection are artists like Prince, Joe Bradley, Christopher Wool, Nate Lowman, Alex Da Corte, Alex Israel, Dan Colen, and many other very famous artists. I don’t blame artists for who owns their work. But on Wednesday Prince took an unusual step against his own collectors, in this case Jared and Ivanka, who’d bought the Instagram portrait. In his tweet he flatly asserted, “This is not my work. I did not make it. I deny. I denounce. This fake art.” He later texted me that he returned the $36,000 that had been paid for the picture and wrote, “I’ve disowned the work. It is no longer my work.” I loved it.

This single gesture contains a lot, and works on a lot of levels — some of them almost alchemical. First, in disowning one of his own works to protest its new owners, Prince placed himself in a rare company. I can think of a couple contemporary artists who took similar steps, among them minimalist sculptor Donald Judd, who famously disowned a number of pieces owned by the megacollector Italian count Giuseppe Panza after Judd declared that the collector had violated terms of their agreement.

But he may not be in such rarefied territory for long. It goes without saying that as many as half of all collectors could be Republicans or conservatives. And maybe voted Trump. We know the Kushner-Trumps did. Perhaps all the living artists in the Kushner-Trump collection might disown their work, say it is “fake,” making it instantly worthless (in addition to being an aesthetic and political slap in the face). I couldn’t help agree with all of them that having one’s work owned by the Trumps does somehow taint the work, almost negating it already. But even if this en masse disowning is only an isolated action, limited to those artists lucky enough to live off their work, just a drip in the middle of this building shitstorm of a presidency, I gleaned an artist trying to take back his name, his work, do something, anything. To do this in a time that is calling to us all to take action rather than to simply default, using our energies to criticize how others use their energy.

Prince’s act of disownership opens up an incredible window of resistance to artists, and, immediately on social media, he found himself explaining. “Redacting Ivanka’s portrait was an honest choice between right and wrong. Right is art. Wrong is no art. The Trumps are no art,” he wrote. “Not a prank. It was sold to IvankaTrump & I was paid 36k on 11/14/2014. The money has been returned. SheNowOwnsAfake.” Then: “Make Trump small again.” And finally: “This should not B confused with aesthetics. This is not a gesture. This is an action. Something I have control over. A yesOrNo.”

But whatever Prince says, I can’t dismiss the “aesthetics” of the “action,” or “gesture,” which I’m still trying to sort through. Part of that has to do with Prince’s history — he’s spent over 30 years culling subcultures, taking other people’s pictures, making almost invisible worlds visible via appropriation (which is really a form of declaration, “This is art.”). He was not the first in this tradition, of course, and several of those who came before even got into interesting tangles with their patrons over the matter of at just what point a particular work became a work. In 1950, after Duchamp’s original urinal readymade was lost, he authorized gallerist Sidney Janis to purchase a similar one in New York, date it 1917 and sign it, as his. Further afield in 1961 Robert Rauschenberg sent a telegram to Galerie Iris Clert in Paris with the words, “This is a portrait of Iris Clert if I say so.” All these artists were creating and uncreating by their will or word. Saying it made it so. This is using language as law, as in “I now pronounce you man and wife” or “I sentence you to five years.” Or Biblically: “In the beginning was the Word, and the Word was with God …” Whatever else these artists and Prince did they reduced art to some invisible essence, the will of the artist, making the artist primarily a conceptual creator or destroyer of worlds. A declaration of independence of the mind that rearranges molecules so that something goes from art to not-art or non-art. But on Wednesday Prince moved things in the other direction, using that biblical power not to make but to take away — not to bestow but withdraw the art content of the work. This drop-dead simple yet loaded act is actually a quite profound and radical innovation, one that immediately suggests there may be dozens of new conceptual gestures and possibilities in this strange new conceptual universe artists find themselves now living in.

Which brings us to Prince’s brilliant use of the word “fake”—and especially the phrase “fake art.” The phrase sort of made my head spin — is it possible Prince had just invented a whole new conceptual category of art? What could “fake art” mean? It certainly doesn’t mean “forgery,” and it can’t simply mean “bad art.” But it doesn’t seem to me simply to mean “work bought by someone the artist disapproves of” or even “work no longer condoned by the artist.” It seems — to me, anyway — to suggest something much squirrellier than that, some new way of thinking about how to navigate a news theater dominated by “fake news,” the disappearance of cultural, intellectual, and aesthetic authorities, and the rise of a disinformation state. If “fake news” is dense enough to change the world, think of what fake art might do. Perhaps be used as emotional time bombs, prestidigitation acts of refusal, ways of reclaiming power for the artist in this time when, to my way of thinking, ours is an era for foot-soldier actions. Large and small. Like Prince’s.

I can’t say for sure I understand how it all fits together, in Trump’s world or the art world, or exactly what kind of aesthetic war Prince’s gesture is declaring. But something tells me we’re going to spend a good chunk of the next four years working on lots more like this and figuring them out as we go.

*This article has been corrected to show that Wade Guyton has not sold a piece to the Kushner-Trump family.