For those actors in the running for major awards, now is the winter of content: interviews, roundtables, and most of all, photo shoots. Sometimes those photo shoots are very silly. Sometimes they are oddly grim. For its movie issue, W magazine commissioned a series of covers featuring pairs of actors in, well, unconventional poses. How did it happen? Let’s go on a journey of pure imagination. 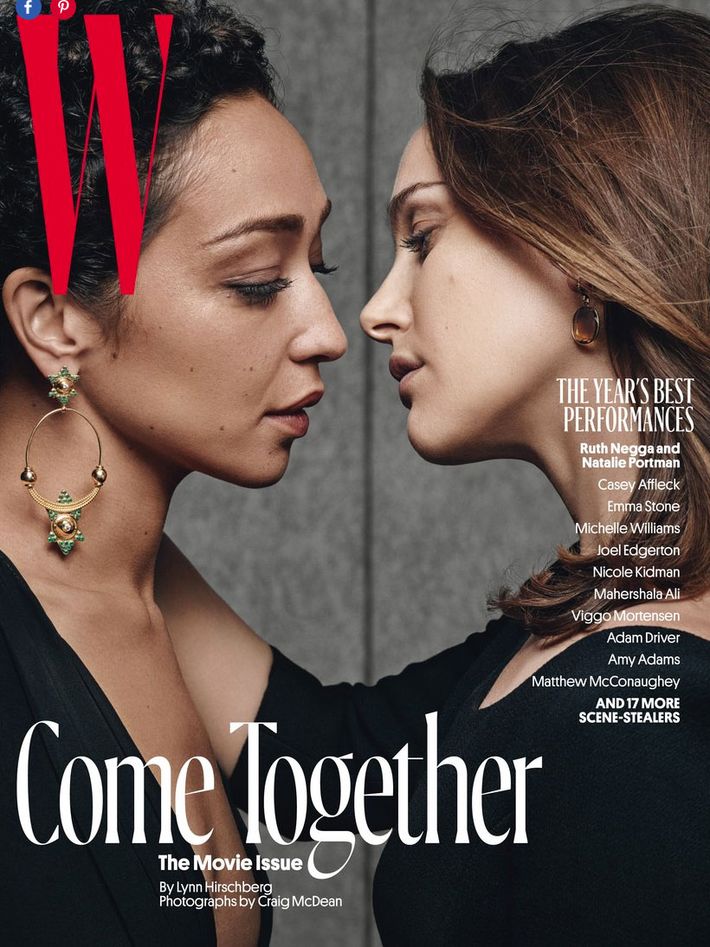 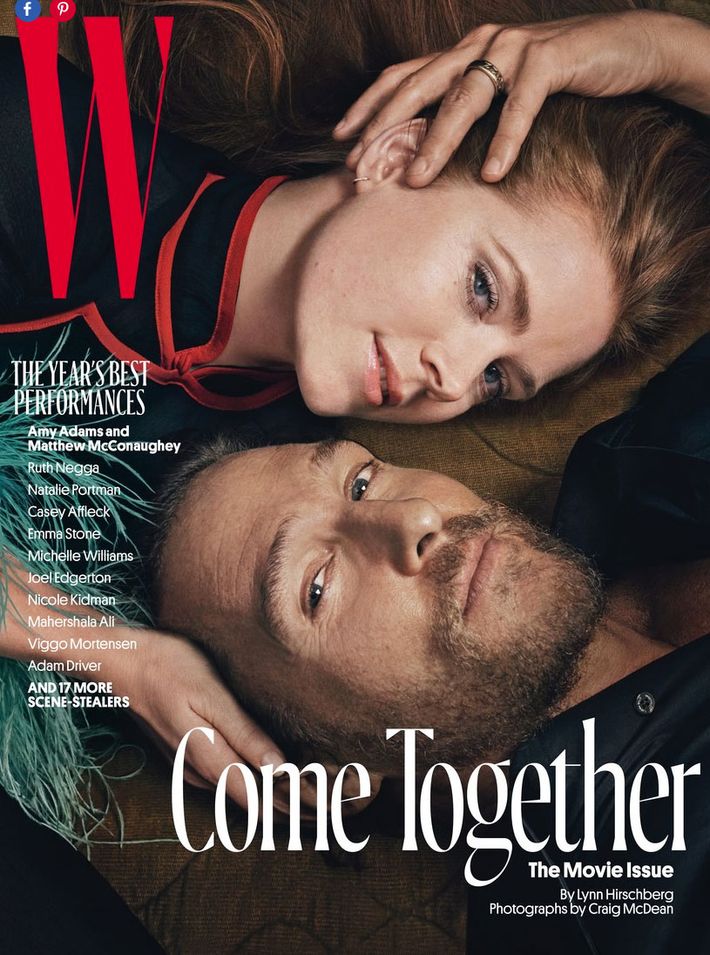 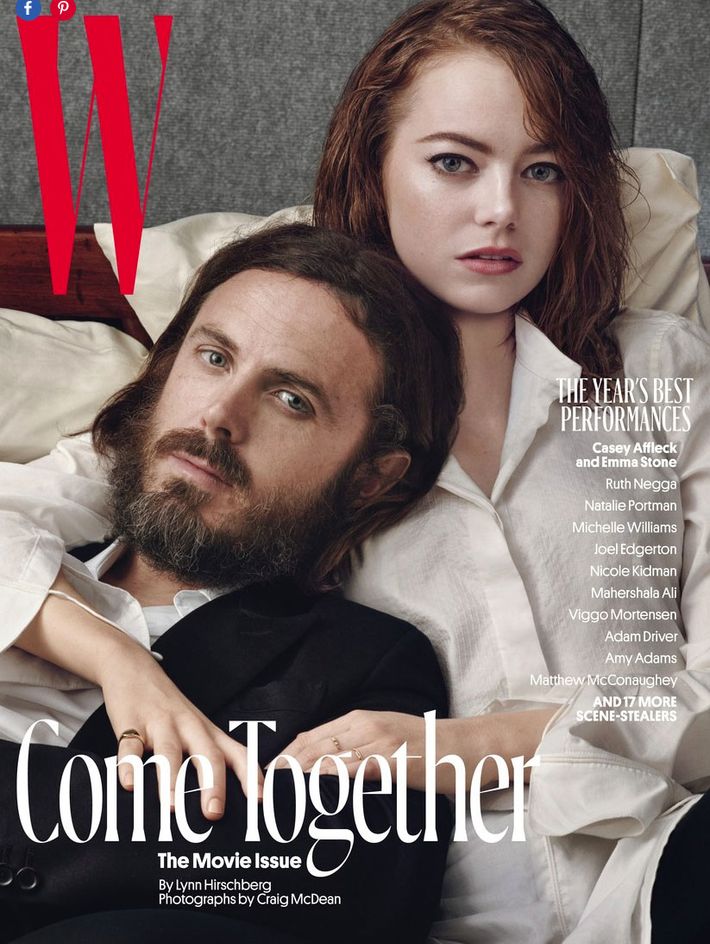 Emma Stone, under her breath: “Ryan would’ve shaved.”
Casey Affleck, under his breath: “Matt said I didn’t have to.” 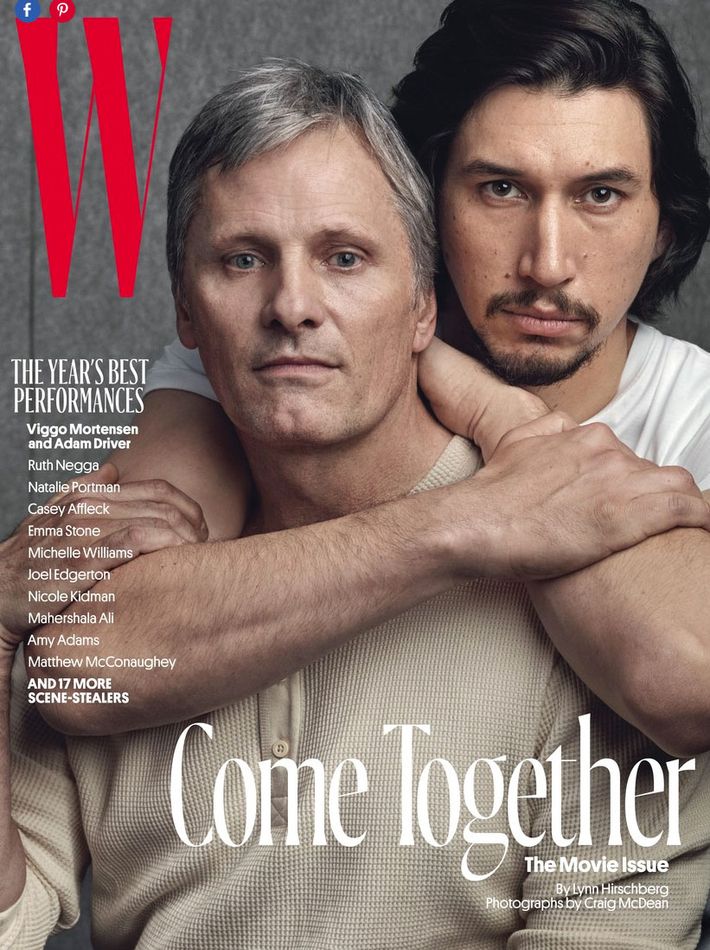 Photographer: “So the idea for this one is ‘looking for a third, open to choking.’” 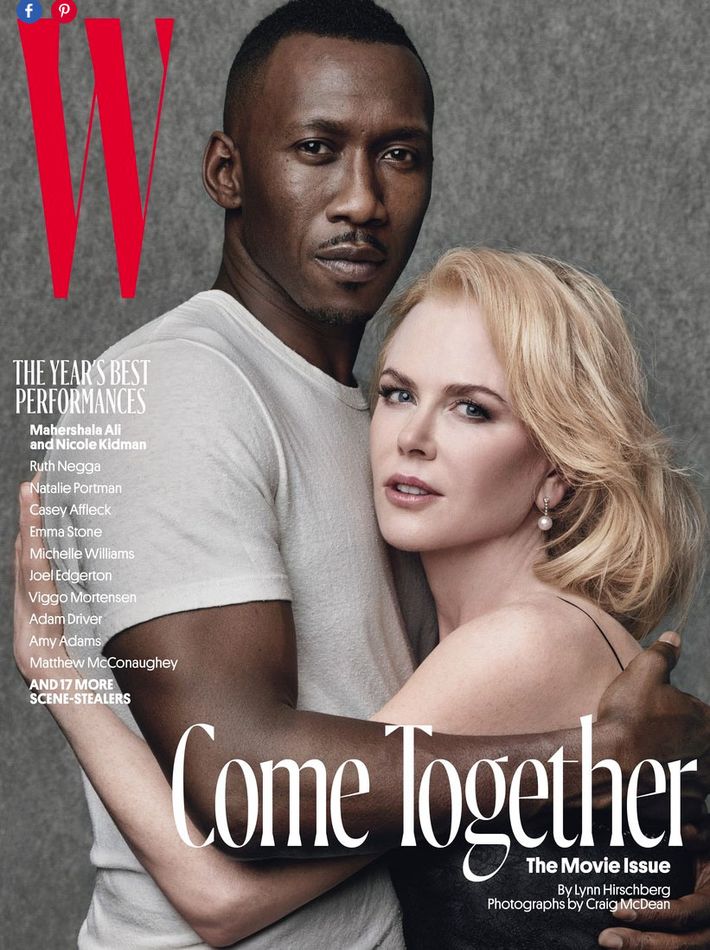 Nicole Kidman: “Come with me to Australia. It’s beautiful in Australia.”
Mahershala Ali: “I can’t breathe.”

overnights 19 mins ago
The Real Housewives of Beverly Hills Recap: Three Is the Loneliest Number What this whole skirmish really emphasizes is that Kyle Richards is not cut out to be alpha.
quarantuning 9:03 p.m.
Carly Rae Jepsen Casually Mentions She Made ‘An Entire Quarantine Album’ As if Dedicated Side B weren’t enough of a gift already.
netflix 7:55 p.m.
Netflix Is Opting Out Of the Film Festival Circuit This Awards Season The streaming giant will not be sending any films to festivals in 2020.
instagram 6:25 p.m.
John Boyega Needs You to Know That He Really Hates Racists And his mum is proud.
#_____isoverparty 4:31 p.m.
Doja Cat’s Controversial Career, From Overnight Star to Canceled Overnight TikTok to … alt-right?
By Zoe Haylock
oh boy! see ya real soon! 3:15 p.m.
Here’s Everything We Know About Disney Parks Reopening Walt Disney World in Orlando will reopen in two phases in July.
theater 2:30 p.m.
Miscast Gala to Bring Those Delightful Performances Right to YouTube This Year A perennial highlight of the Broadway season.
deaths 2:29 p.m.
George Floyd Was a Houston Rapper Who Worked With DJ Screw Floyd died in Minneapolis police custody on May 25.
vulture lists 2:12 p.m.
All 48 of Ariana Grande’s Collaborations, Ranked Revisiting the pop star’s long list of team-ups after “Rain on Me” and “Stuck With U.”
By Justin Curto
revisitations 2:02 p.m.
Agents of S.H.I.E.L.D. Never Stopped Reinventing Itself The last vestige of the Marvel Television era enters its final season a fundamentally different show from the one that premiered in 2013.
profit margins 1:15 p.m.
John Krasinski Says He Didn’t Sell Out Some Good News: It ‘Wasn’t Sustainable’ The show is headed to ViacomCBS after a massive bidding war.
explainers 1:15 p.m.
So, How Do I Actually Get HBO Max? And what’s the difference between HBO Max, HBO Go, and HBO Now?
coronavirus 1:09 p.m.
Aneesh Chaganty Is Living in His Parents’ House, Contemplating Searching 2 He’s not writing or directing the sequel anymore. Instead, he’s focusing on a new heist movie and pitching a new TV show, too.
By Aneesh Chaganty and Sean Fitz-Gerald
sesame street 12:30 p.m.
Chatting With Elmo About His (Not Too) Late Night Debut  A very special Zoom call with Sesame Street’s newest talk show host.
coronavirus 12:30 p.m.
The Best Movies to Watch in Quarantine, According to Famous Directors Want to disappear into a movie? We asked Luca Guadagnino, Claire Denis, Michael Mann, David Lynch, and more to recommend some escapist films.
By Vulture Editors
deaths 12:26 p.m.
Larry Kramer, AIDS Activist, Author, and Playwright, Is Dead at 84 Kramer was a crucial AIDS activist and dramatized the movement in The Normal Heart.
vulture lists 11:50 a.m.
All the Verzuz Instagram Live Battles, Ranked These weekly producer-songwriter battles have become our new appointment television.
By Craig Jenkins
tv 11:32 a.m.
Gabrielle Union Says Simon Cowell’s On-Set Smoking Gave Her Bronchitis “I ended up staying sick for two months straight.”
remembrances 11:08 a.m.
Fred Willard Was ‘One of the Good Guys’ Norman Lear, John Michael Higgins, and Bob Balaban remember the late comedian and actor.
vulture guides 10:30 a.m.
Which Streaming Service Do You Actually Want? Helping you navigate the many, many, many, many, many, many, many options out there.
More Stories