As David Harbour delivered the most forceful and animated speech of the night at the Screen Actors Guild Awards, his co-star Winona Ryder delivered what was by far the best reaction to any speech at any awards show this season — or maybe during any awards show ever. Standing fully in frame next to Sheriff Hopper, Ryder’s wave of expressions were at once broad and indecipherable. As her co-star grew louder and more impassioned, Ryder’s face became a road map of every emotion. There seemed to be fear, delight, confusion, affirmation, disapproval, consternation, and somehow more. At a time when our national emotions are but a handful of eggshells held together by Scotch tape, Ryder captured the collective consciousness of a populace feeling every feeling at the same time. Here are her 13 best reactions to Stranger Things winning best ensemble in a drama series, and to David Harbour saying progressives are going to be punching a lot of people in the face.

The “Are you sure this isn’t for Downton Abbey?” 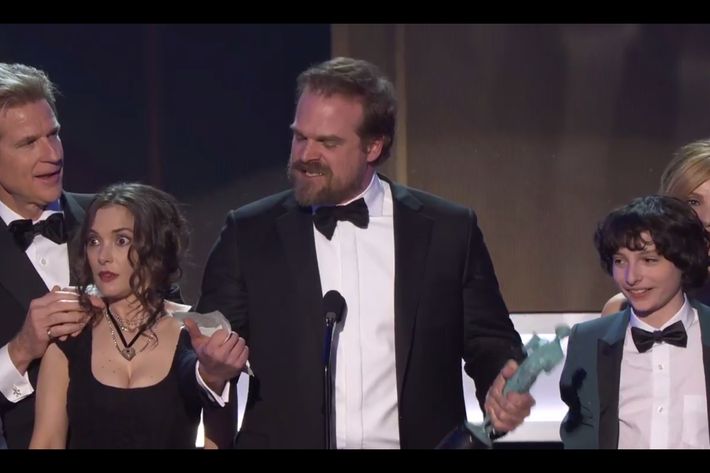 The “David, this isn’t what we discussed.” 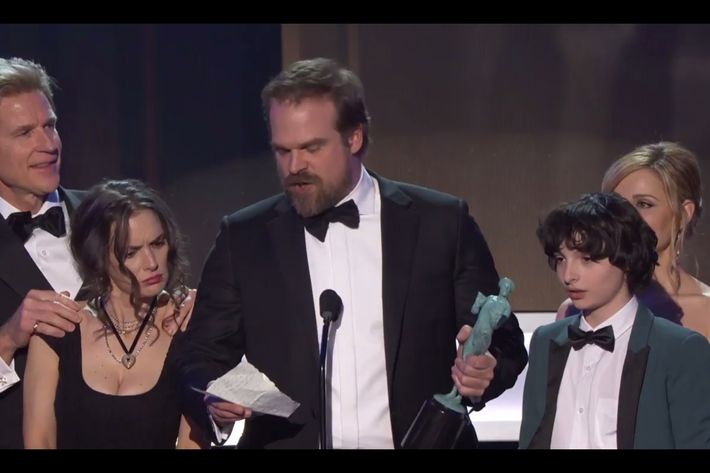 The “Can someone at home call for paramedics if David goes down?” 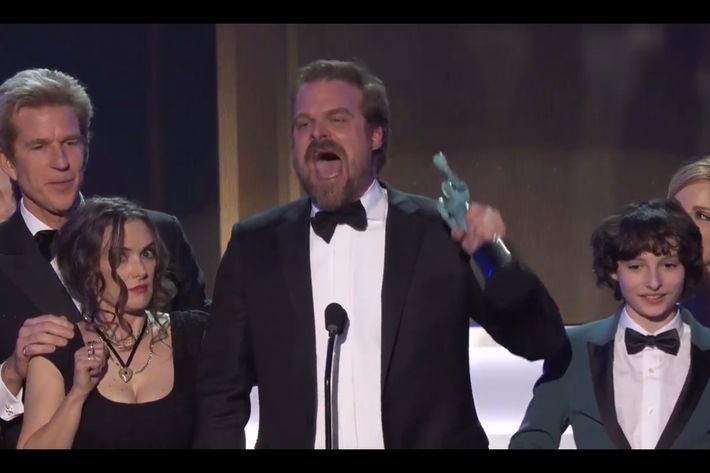 The “Wait, is this the Upside Down?” 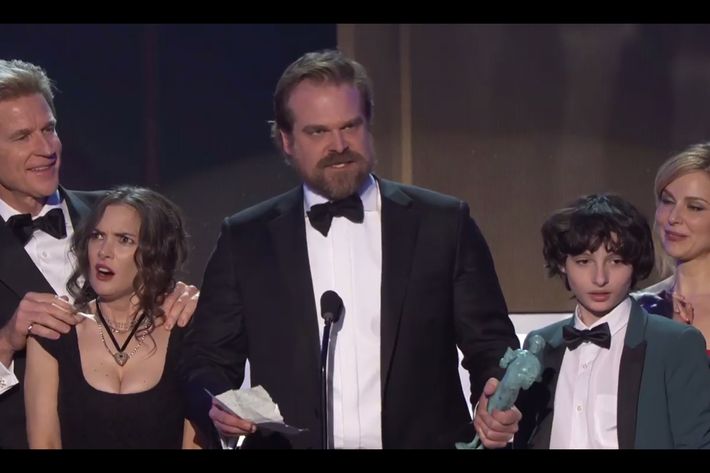 The “We’ll discuss this later, David.” 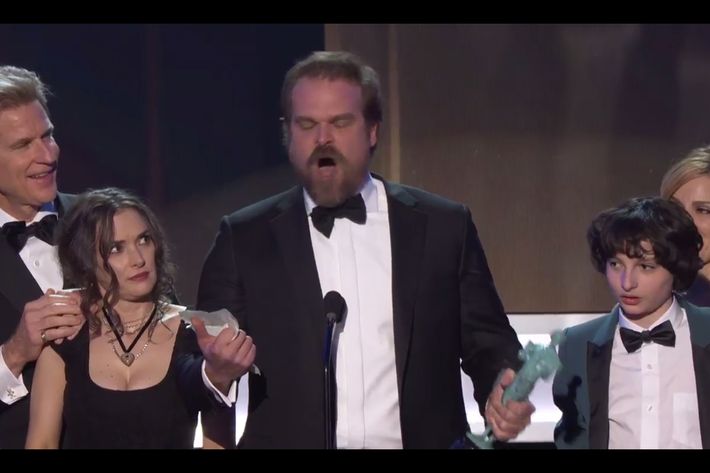 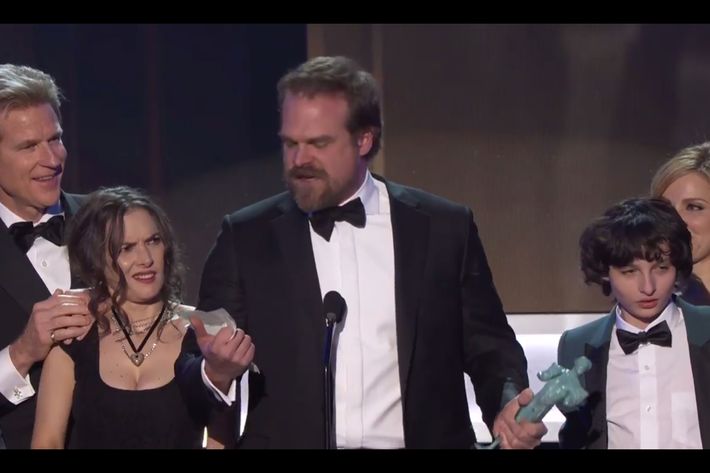 [This face has no known emotion.] 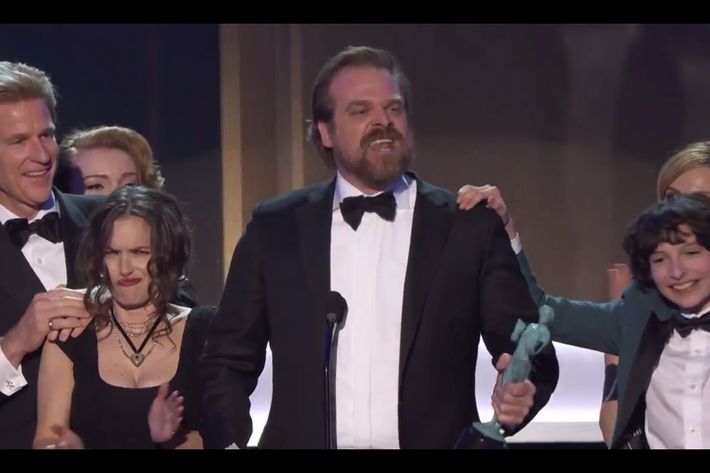 The “You bet your ass we’ll be fighting monsters!” 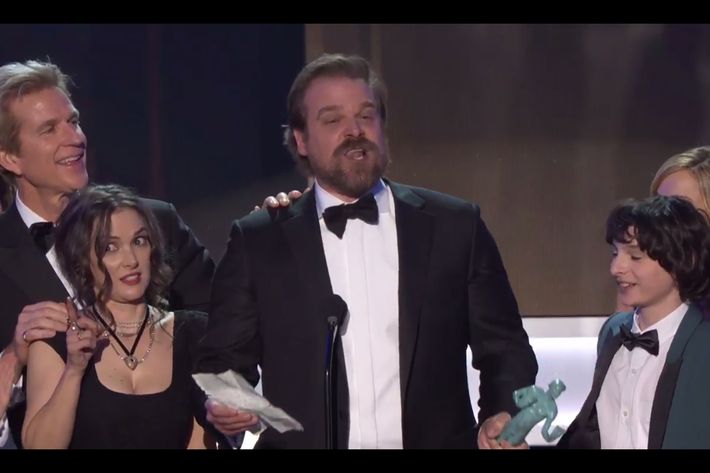 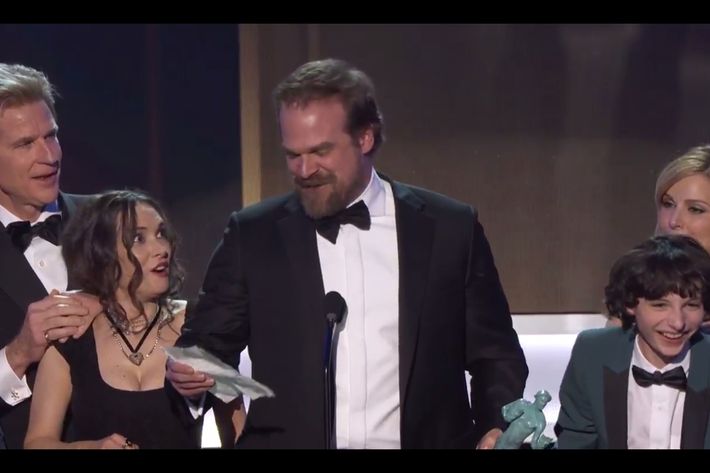 The “Should I raise a fist for face-punching?” 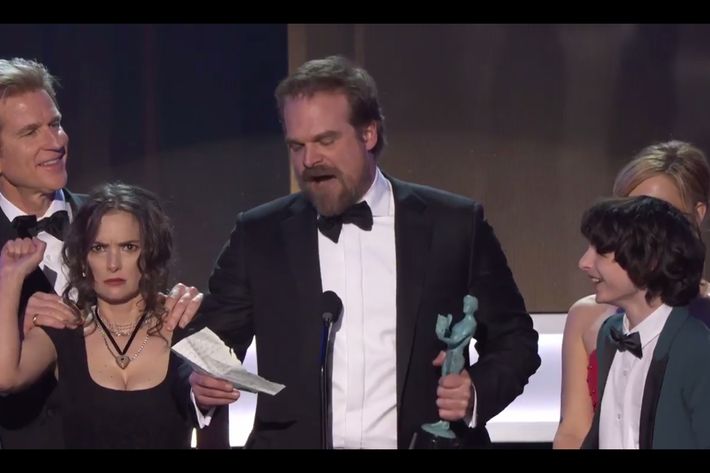 The “Oh, I’m definitely raising a fist for face-punching.” 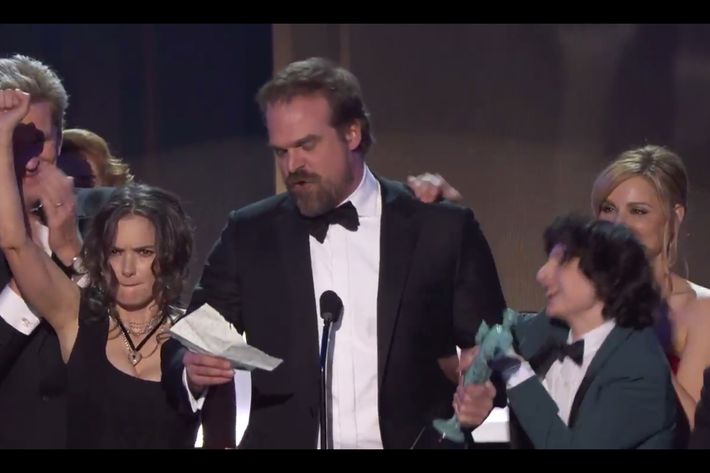 The Ben Affleck Stare Into the Abyss. 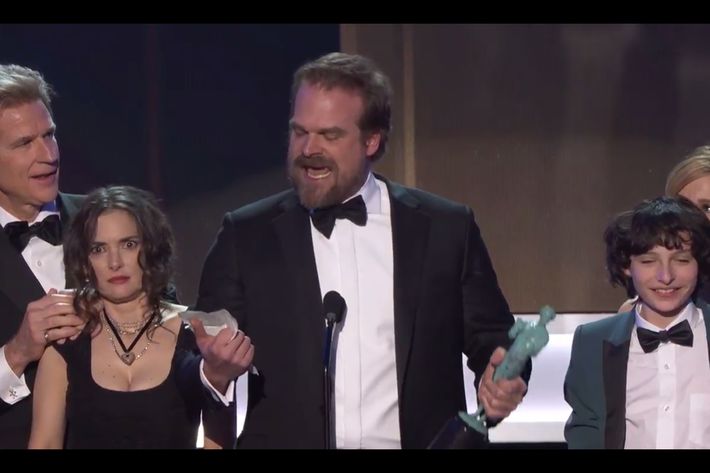 The moment you realize you just became the runaway meme of the 2017 SAG Awards. 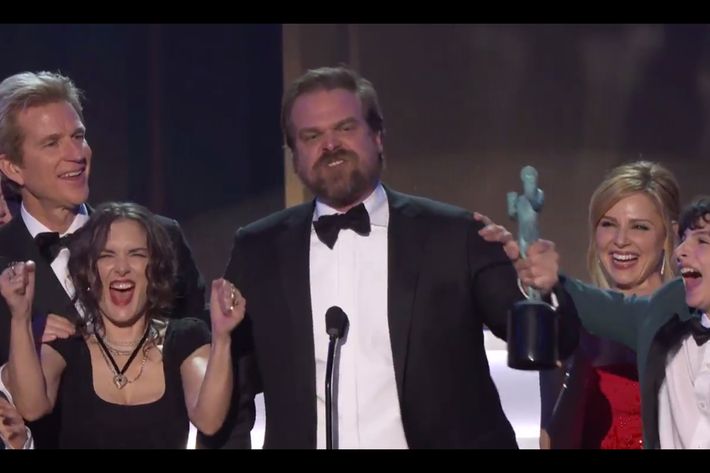 cancel culture 20 mins ago
If You’re Reading This, Your Favorite Show Is Canceled All the TV shows we’ve lost in 2023, including Reboot and Gossip Girl.
last night on late night 10:15 a.m.
Harrison Ford Reviews Jason Segel’s Penis He’s familiar with his Shrinking co-star’s body … of work.
overnights 10:00 a.m.
Poker Face Recap: You Can’t Kill the Revolution Irene and Joyce’s murder is pretty badass to watch — like if The Golden Girls joined Fight Club.
role call 10:00 a.m.
Debbie Harry Answers Every Question We Have About Videodrome The Blondie legend on the “sticky” consequences of dyeing her hair, how James Woods annoyed David Cronenberg, and her work on Tron — whatever that is.
trailer mix 9:44 a.m.
Perfect Match Is Squid Game for Dating Netflix’s most famous singles will take matters into their own hands February 14.
explainers 8:00 a.m.
What the Great Netflix Password Crackdown Means for You Let’s talk about it.
making it 8:00 a.m.
Jen Beagin’s Novel About Sex Therapy Sparked a Hollywood Bidding War She was a waitress at 47. Now, her book Big Swiss is being adapted by Jodie Comer for HBO.
encounter 8:00 a.m.
Myles von Trapp Derbyshire Has a Story to Sell The Sound of Music scion says there will be no singing nuns in Baroness.
By Nate Jones
what's rita ora up to? 1:15 a.m.
Rita Ora Did a Wedding-Ring Reveal on The Tonight Show Tens of people wanted to look at Rita’s rock.
heartbroken Yesterday at 9:42 p.m.
6 Shows That Aren’t Getting Valentines This Year Reboot, Kindred, American Gigolo, and more have been canceled.
blind items Yesterday at 9:32 p.m.
Which ‘Massive Movie Star’ Did Jessica Simpson Secretly Date? Mister Police, she gave you all the clues.
text me back! Yesterday at 8:36 p.m.
Winona Ryder Leaves Finn Wolfhard on Read All the Time “She’ll text you, and then you’ll text her back, and then she won’t text you ever again.”
hard pass Yesterday at 7:40 p.m.
Seth Rogen Wouldn’t Do a Freaks and Geeks Reboot Okay, but what about Undeclared?
prison Yesterday at 7:13 p.m.
Jafar Panahi Goes on Hunger Strike to Protest Detention at Evin Prison Panahi should have been released to await a retrial on charges stemming from 2009’s Green Revolution.
guess who's back Yesterday at 6:41 p.m.
Mary Cosby Reportedly Returning to RHOSLC in ‘Friend’ Role Cosby will be the friend of Meredith Marks, friend to all (except Lisa Barlow).
ticketmonster Yesterday at 6:19 p.m.
Biden Wants His Beyoncé Tickets Like the Rest of Us He called for limits on junk fees for concerts and sporting events.
grammys 2023 Yesterday at 5:11 p.m.
Benito, Blige, and Brandi Among Grammys Performers Kacey Musgraves, Sheryl Crow, Mick Fleetwood, and Quavo will perform during the “In Memoriam” segment.
hard launch Yesterday at 3:36 p.m.
Paramount+ and Showtime Hard-Launch Their Merger Paramount + Showtime – multiple shows = new service.
respect the classics Yesterday at 2:12 p.m.
Ozzy Osbourne Retires From Touring Over Spine Injury “Never would I have imagined that my touring days would have ended this way.”
relaxing things Yesterday at 1:41 p.m.
Drift Off With Joe Pera’s New Podcast The comedian is back on his bullshit. The bullshit, in this case? Helping you fall asleep.
More Stories